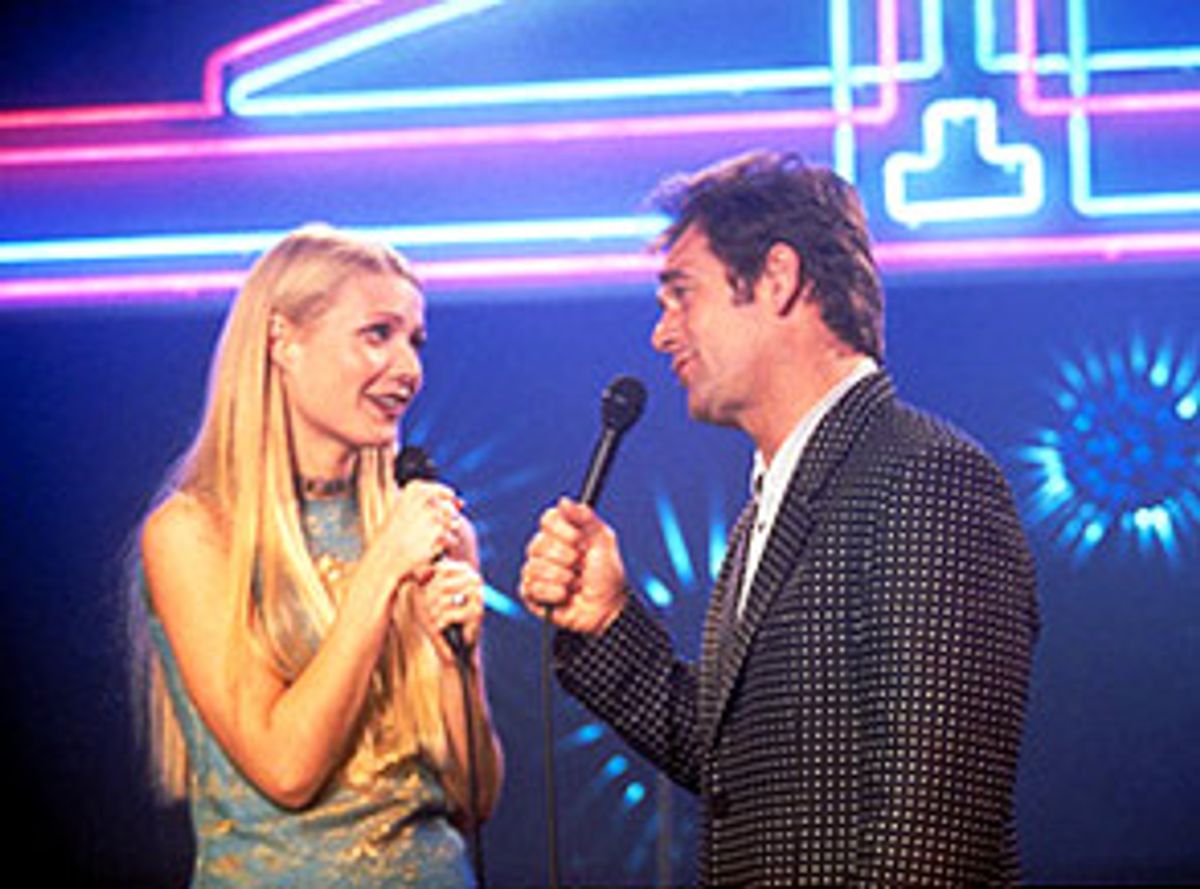 "Duets," a movie about average people who live out their dreams via karaoke, has its share of problems. Its three interlocking stories don't find the right rhythmic balance, and some of the dialogue is stiff and mannered. Yet I can't help fearing that it will be an easy target for people's derision not just because of its unevenness but because it's so gentle and sweet-spirited, even as it works damn hard, perhaps too hard sometimes, to steer away from sentimentality. "Duets" is awkward and slow at times, but the wonder of it is that even though karaoke is something of a joke in our culture, the movie doesn't condescend to its characters, nor does it invite the audience to. It sometimes sings off-key, but at least it sings proud.

Director Bruce Paltrow and screenwriter John Byrum have fashioned a simple entertainment that's by and large carried on the backs of its actors, some who are wonderful and others who are merely likable. The story links three separate pairs of characters whose lives will converge at a karaoke championship in Omaha, Neb. Huey Lewis is a crusty but innately appealing karaoke hustler who earns big bucks by duping people into thinking he can't sing, only to get up and win the evening's purse every time. He has reluctantly become reunited with Gwyneth Paltrow, the daughter he has never really acknowledged. Paul Giamatti is an endlessly traveling businessman who suddenly snaps and heads for the open road, picking up hitchhiker and ex-con Andre Braugher. Finally, Scott Speedman plays an underachieving cabdriver who leaves his cheating girlfriend and suddenly gets pounced on by Maria Bello, a streetwise, back-talking urchin who makes her money any way she can -- and not always by singing. The one factor that connects them, with the exception of Speedman, is that they can all, more or less, sing.

Or maybe it should be said that they all pour whatever they've got into the three minutes of fame they can grab in this or that karaoke bar. "Duets" is a movie about enthusiasm that overshoots and sometimes substitutes for talent. But instead of fixating on which of these people can or can't sing, it asks us to believe, as they do, that of course they sound great -- simply because they've willed it so. In that respect, the way "Duets" treats its characters is refreshing. There are brief moments when it reminds us that plenty of people enjoy karaoke at the expense of their audience (during one scene an Asian businessman warbles tunelessly in the background), but "Duets" isn't out to make anyone look ridiculous.

Several of the actors do more than their share to compensate for the movie's lax pacing. Giamatti is both wryly funny and touching. When he gets the attention he craves by finally mustering the courage to sing Todd Rundgren's "Hello, It's Me" in a bar -- after being roundly rejected by his wife and family at home -- he makes the moment comic instead of soggily poignant. Braugher, an astonishingly gifted actor, doesn't have much to do here, but it's a wonder how he takes sodden dialogue and makes it resonate: At one point Giamatti asks him what he regrets most about his past, and he replies, with melancholy that somehow lets some light shine through, "All the things I never did -- when I had a chance to do 'em."

Bello's character seems underwritten, and the movie flails when it tries to pin some carelessly random motivation on her, but she has enough control to keep from becoming shrill. Speedman doesn't have much more to offer than his smile, but at least it's a good one.

Lewis and Paltrow are the best pairing. Lewis has grown craggily handsome over the years, but he doesn't pull the old trick that so many handsome-devil performers do, adopting a woodenly taciturn routine. There's a kind of gruff understatement to his line readings -- he's playing an emotionally closed-off character, but he knows how to show slivers of feeling without compromising his essential toughness.

And Paltrow gives a lovely, delicately shaded performance that's in danger of sailing by audiences: Leaving the theater, I heard one woman mutter, "Why would she take this role after winning an Oscar?" Sure, the director is her father. (The movie faced a number of delays and problems from the beginning, including the fact that the elder Paltrow was recovering from cancer during shooting.) Aside from that, Paltrow's performance here shows how she's able to finely calibrate a character that could easily be written off as just another dumb blond. Her character isn't particularly complex: She's a Vegas hotel worker, a sweet girl who has been raised by her grandmother (Angie Dickinson, in a small role) and her Vegas showgirl mother, who has recently died. When her dad shows up for her mother's funeral Paltrow thinks he's finally going to become a part of her life. When he rejects her, she can't understand why.

After trying in vain to win Lewis' affection, Paltrow finally confronts him in a clothing store, and the dialogue is clumsily and blandly written -- the usual stuff about "All I'm trying to do is reach out to you" and "I feel sorry for you." But Paltrow, miraculously, makes the scene work. She doesn't raise her voice in an effort to turn up the scene's emotional heat. Her self-control and her frustration both come through in her weary eyes and in the sudden, temporary deadness that invades her speaking voice -- previously, her tone was slightly and pleasantly bell-like, but in this scene, it's wrapped up and guarded close. And her mere body language is close to heartbreaking: She's coltish and tentative, balanced on those spindly stems. Yet she doesn't play her character as a damaged person. When she shows up unannounced at Lewis' hotel room, wearing a goofy grin with her teenage slouch, a rainbow of butterfly clips in her hair, her troubled sunniness suggests emotional maturity more than deep-rooted unhappiness. Paltrow even sings in character. When she steps up to do "Bette Davis Eyes," her phrasing is breathy and halting at times, but there's always a kind of muted power behind it.

The singing in "Duets" is both its novelty and its biggest source of potential embarrassment (all of the leads do their own singing, with the exception of Braugher, who's dubbed by Arnold McCuller), but oddly enough, it's also its single biggest source of delight. Lewis, of course, can really sing, so he breezes through numbers by Joe Cocker and Smokey Robinson. Bello is a belter, which suits her character perfectly. And when Giamatti duets with Braugher on "Try a Little Tenderness," the visual contrast is a fine little joke, but Giamatti more than holds his own in a later a cappella version of the song: It's a number about how women, like delicate flowers, need a special kind of care, but Giamatti's solo rendering is his way of saying that he's the one who needs some of that care, and it works beautifully.

The major problem with "Duets" is that none of the relationships ever quite gel as they should, and late in the movie there's a dark tone shift that throws it way off kilter. Director Paltrow is probably better at guiding actors than he is at shaping whole movies. Regardless, though, there's something freeing about watching actors who are willing to go all-out behind the mike, risking the same kind of embarrassment that real-life karaoke performers do. "Duets" doesn't always serve its actors well. But no matter what, they sing it like they mean it.