Maybe this year we'll be spared the USA's boorish egoism. 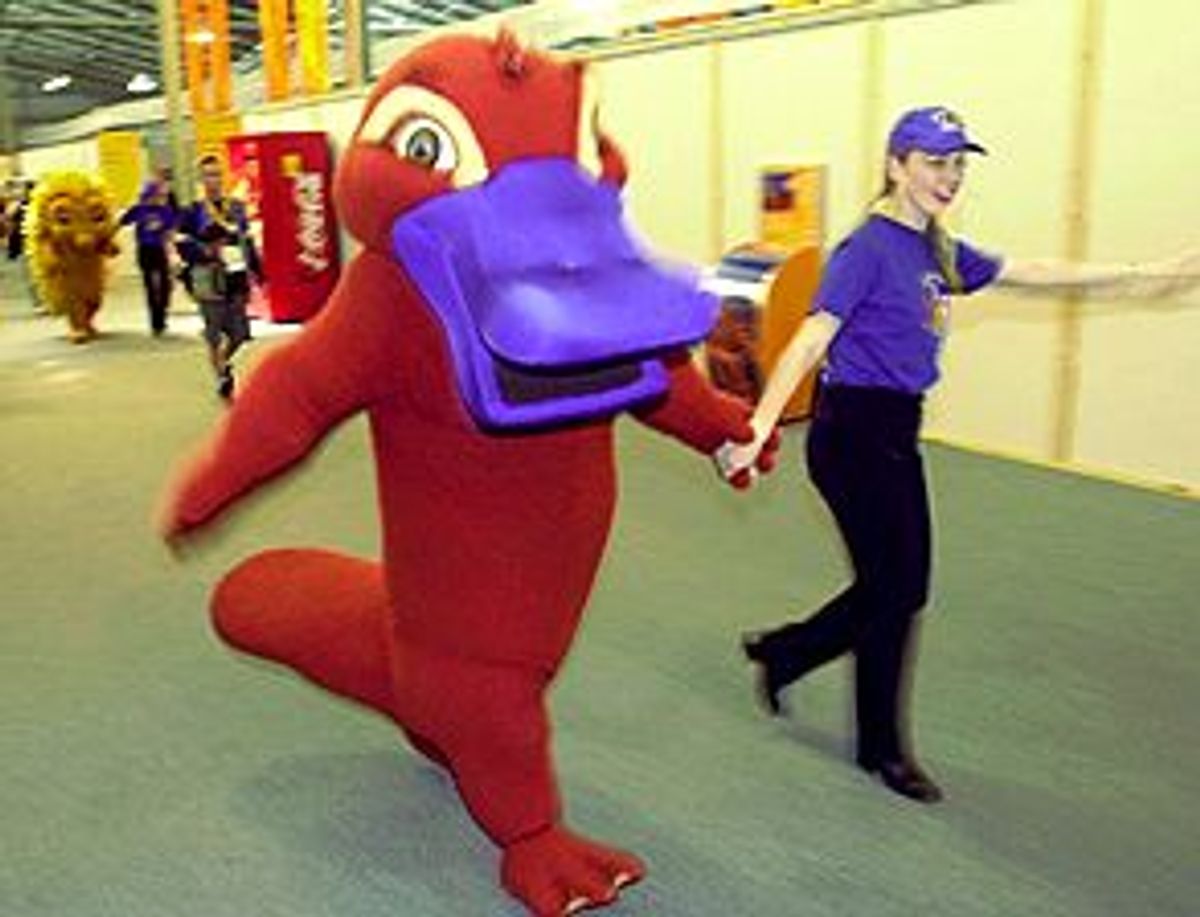 The Sydney 2000 Olympics have three official mascots -- Olly the kookaburra, Syd the platypus and Millie the echidna. Only one of them is poisonous. Hey, for Australia, that's not bad. Just be grateful they didn't go with Olly the blue-ringed octopus, posing for pictures with three lethal tentacles around your shoulders.

There are definitely drawbacks to holding the Olympics in Oz, among them starting the Summer Games roughly two weeks after the end of the Australian winter. Then, too, there is the possibility of athletes testing positive for the venom of the Sydney funnel web spider or the giant brown snake. Luckily the tests are self-administering and basically involve awaiting the onset of rigor mortis.

Yes, in the Lethal Olympics, the competitors from Down Under take gold every time. Of the three mascots, it's Syd you need to watch out for -- male platypuses have poison spurs. The island continent boasts the deadliest spider and the deadliest snake (the aforementioned twosome), as well as rejected mascot candidate the blue-ringed octopus. And don't count out that wiry lightweight, the box jellyfish; gram for gram, it's the single most poisonous creature on the planet. Not to suggest that all Australian animals are poisonous. Great white sharks carry no venom whatsoever. Ditto the hammerhead.

But these factors will merely add extra spice to the television viewing experience. And for many regions of the world the 2000 Olympics will have one major advantage over the 1996 version -- this time, the Games will take place outside the United States. For those not fortunate enough to be American, American Olympiads are among the most reliable of lunch catapults.

Take the most recent example. Seen through the filter of NBC's network coverage, Atlanta was a triumph, a stunning showcase for the New South, a reaffirmation of America's unstoppable will to win. And security guard Richard Jewel was definitely, allegedly, the Olympic bomber.

Outside the United States, media reports from Atlanta spoke of organizational disaster and boorish crowds who jeered at rival competitors. Writing in national Canadian newspaper the Globe & Mail, columnist Stephen Brunt summed up international media reaction this way: "These people already have made up their minds. The Games of the 26th Olympiad, they have told the world, are one colossal mess, and the Atlanta organizers are 100 percent to blame."

Meanwhile Long Island Newsday reported: "In the comprehensive books of the Olympics, these will be known as the Kerri Strug Games."

I guess it depends on which paper you're getting.

Every country celebrates its athletic successes. National aggrandizement is a big part of what the Olympics are all about, second only to increased brand recognition. But to those outside the States, U.S.-hosted Olympiads often have a nasty tone -- an impression magnified by the American media megaphone.

The 1984 Los Angeles Games were an undeniable financial and organizational triumph. Thanks to the folks at ABC, they were also a black mark for international relations. As the host network, ABC had the responsibility of feeding camera coverage to foreign networks, which would then add commentary. Announcers can cheerlead all they want for the benefit of their national audiences, but the host network is obliged to record the events in unbiased fashion with straightforward camera coverage. Of course, for a network locked in a ratings battle, it's a tremendous competitive advantage if you don't give a rat's ass what the rest of the world thinks. ABC cameras focused on American competitors at the expense of other contenders, sometimes even showing U.S. medalists on the podium while cropping out foreign winners.

If television and certain print media -- e.g. Newsweek -- were any guide, American coverage of the Atlanta Games was a mixture of fawning and flag waving. Thankfully, the American media industry is a many-headed beast. A Canadian paper quoted Tony Kornheiser of the Washington Post as saying: "If NBC ... wrapped itself in the flag any tighter, half the broadcast crew would suffocate ... My sense of the Olympics so far is -- We win! We win! Hoorah, USA! They win? Oh, they must be on drugs."

USA Today and CNN were also critical of NBC's coverage (which even managed to shortchange American champions -- the gold medalists in women's softball were banished with no coverage and hardly a mention so that the network could concentrate on the more ratings-friendly gymnastics).

From outside the country, though, it was difficult to know just how many dissenting voices were being raised. Anyway, if Americans were gagging on their own gush, Canadian observers were too busy seething at NBC and Sports Illustrated to notice. After Canadian sprinter Donovan Bailey won the prestigious 100-meter sprint, his proud nation bestowed on Bailey the title traditionally reserved for the 100-meter champ -- world's fastest man.

We waited for the world to follow suit. But no. Employing twisted logic and sour-grapes statistical analysis, the official American media organs concluded that, in fact, 200-meter champion Michael Johnson deserved the tag of world's fastest. Never mind that their arguments could also have been successfully applied against American 100-meter champ Carl Lewis four years previously. Johnson, like Lewis before him, graced the Sports Illustrated cover as the world's fastest man. Far to the north, a nation screamed epithets as one. (The controversy led to a 150-meter match race, Bailey vs. Johnson. Bailey was in the lead when Johnson pulled up lame halfway down the track. Canadian coverage of the event was intense, and our jubilation, frankly, mean-spirited.)

Canadians celebrate Canadian winners, Norwegians cheer Norwegian champs. That's the point. But at the 1994 Winter Games in Lillehammer, crowds seemed equally supportive of good performances across the board. Never was there any underlying hint that Norwegian successes were evidence of inherent Norwegian superiority. Foreign resentment of American athletic competitions springs from the conviction that we are having the Star-Spangled Banner shoved up our collective ass.

As Brunt wrote in the Globe & Mail four years ago: "It's not so much anti-Americanism, but anti-American egoism. What's been implied all along by the Atlanta organizers was not just that they could do the job as well as, say, the people in Barcelona, but that they were inventing an entirely new way of going about it, infinitely superior to what went before and surely the model of Olympic Games to come. In any area of human experience, that is called asking for it."

As the world's preeminent economic and military superpower, it's to be expected that Americans will see something more at work when they host the Olympics. In this (and only this) U.S. Olympiads tend to resemble the Berlin Olympics of 1936. Unlike the evil Nazi propaganda message, American chest pounding, while annoying, is harmless. But like Hitler's Games, U.S. Olympic tournaments seem designed to proclaim American superiority to the world. The same will probably be true of a Beijing Olympiad should the Chinese win their bid for the 2008 Summer Games.