The spiritual guru discusses his new book and what he does with the $15 million he brings in annually. 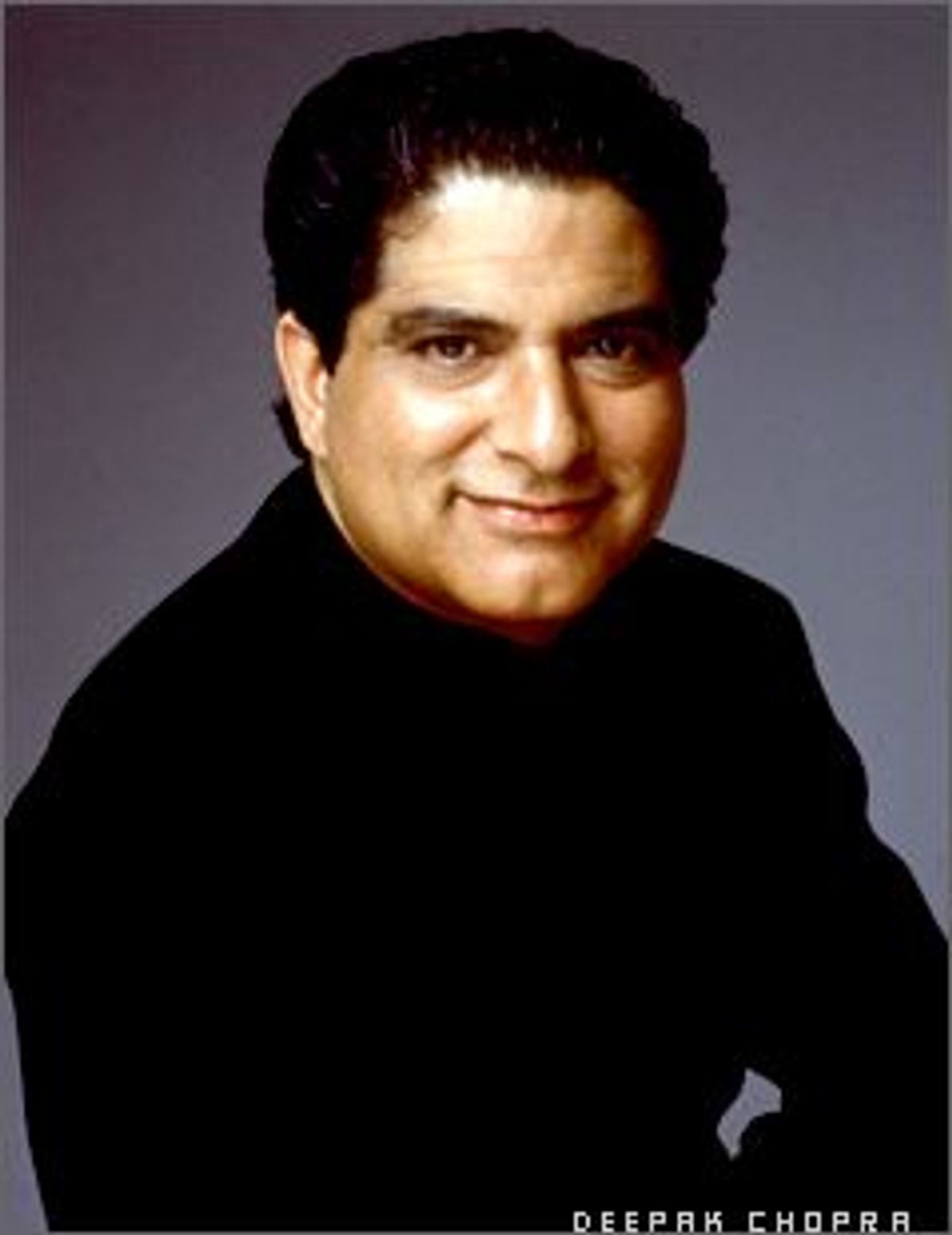 The late 1980s was a really bad time. There were stress attacks, clogged arteries, bypass surgeries and weight problems. New Age gurus rushed in with prescriptions of low-fat diets, weight loss strategies and St. John's Wort. Their followers swore by them.

But Deepak Chopra, M.D., was perhaps the only one who struck international chords by preaching the fusion of mind and body for perfect health. Combining the polish of the Western public speaker with the mystique of the East has earned him the attention of even the hardest cynics.

It became impossible to ignore him. A highly paid speaker, Chopra was featured on "Larry King Live," the cover of Time, shelves of bookstores and the Internet. And now that the lessons of good health have been taught, Chopra, 53, reaches out to explore spirituality in his new book, "How to Know God: The Soul's Journey Into the Mystery of Mysteries."

His inspiration for writing the book was Albert Einstein, who once said, "I want to know what God thinks; everything else is a detail."

"I wrote this book because I believe that the experience of God is available to anyone, regardless of religious background or lack of it," Chopra says.

Chopra cuts right to the point: "I believe that people reading this book will understand how miraculous healing occurs and why desires sometimes get fulfilled without any conscious effort on our part. I want my book to empower people so they begin to understand that a spark of the divinity that great prophets experienced inside themselves is also present in their being," Chopra insists. Continuing on building passion, he says, "When they pay attention to this spark and nurture it, it can become a brilliant flame that can transform their own lives and all those who are affected by them."

Chopra's work brings in $15 million annually. In June 1999, Time counted him among 100 heroes and icons of the century. His approach to financial matters is unique. "I do not think about money, nor do I look at bank or financial statements," he says. "I've always lived my life with the premise that when I need money, it will show up from wherever it is at the moment. I look upon money as life energy, and I look upon all transactions as exchange of energy and information and as the nurturing of relationships."

When he does receive payment in the form of royalty checks or income from speaking engagements and other fees, he sends it to his company's accountant, who pays the bills and sends the rest to Chopra's wife, Rita, who either spends the money or invests it.

"I never ask her questions about it, nor am I interested in knowing where it goes," he says. "My lifestyle and that of my family is not ostentatious or extravagant and we do not have expensive habits. We've lived the same way for the last 30 years. At the same time, we have never experienced a shortage of money, either psychologically or on the material level."

Chopra has one credit card, never carries more than $300 and ensures that 10 percent of all his earnings goes to charity and nonprofit events or activities.

In the 1980s, Chopra's days and nights merged when he became chief of staff at Boston Regional Medical Center, while still maintaining a private practice and his teaching affiliations with Tufts University and Boston University schools of medicine. During that time, he found himself walking through halls and classrooms, chain-smoking and drinking endless cups of coffee.

Dissatisfied with his general health and that of his patients, Chopra realized that being healthy was much more than just "not being sick."

Chopra threw into his medicine bag a mix of Western training and skill, ancient wisdom and the holistic approach to medicine called ayurveda. In 1984, he brought ayurveda to the American consciousness and established an Ayurvedic Health Center for Stress Management and Behavioral Medicine in Lancaster, Mass.

Since then, he has emerged as one of the world's leading proponents of this innovative combination of Eastern and Western healing. He also combines ancient mind/body wisdom with current anti-aging research to show that the effects of aging are largely preventable. Changing your perception of aging, and being aware of your body and how it processes experience, may actually change how you age.

"Most people think that aging is fatal -- that's not true. People die of diseases that accompany old age, not from being old," he explains. "Many also think aging is irreversible. Through correction of diet, removing toxins from the body, yoga and breathing techniques and through meditation, the human machinery allows some reversal."

These days, Chopra lives in La Jolla, Calif., with his wife of 30 years. Their daughter, Mallika, 29, is the founder of MyPotential.com, a new "human potential" site set to launch later this year. Their son, Gotham, 26, is an anchor for ChannelOne news, broadcast throughout the country's high schools. Chopra lives in the moment and spends that moment sharing his views at about $25,000 a pop with major corporations and organizations such as the World Health Organization, the United Nations and London's Royal Society of Medicine. Chopra predicts that organized religion will not exist in the future, and that "the study of spirituality will be scientific." Also, at the physical, medicinal level, everyone will be his or her "own best healer."

Chopra has already achieved that level of peace when it comes to his finances.

"My definition of wealth is a state of consciousness where you don't have to think about money but at the same time you are secure in the knowledge that the source of all wealth is consciousness, and therefore it is infinite, unbounded and inexhaustible. If all this sounds crazy to you, you're right. People think my attitude toward money is irrational. However, it works for me."

Sonia Chopra is a writer based in Greenville, South Carolina. She is a regular stringer for Redbook and contributes to Newsday, as well as Indian Express.