For over two decades, Iran's reigning queen of pop has been strictly forbidden to perform. Now she's got a passport, a string of sold-out U.S. stadiums and an angry government back home. 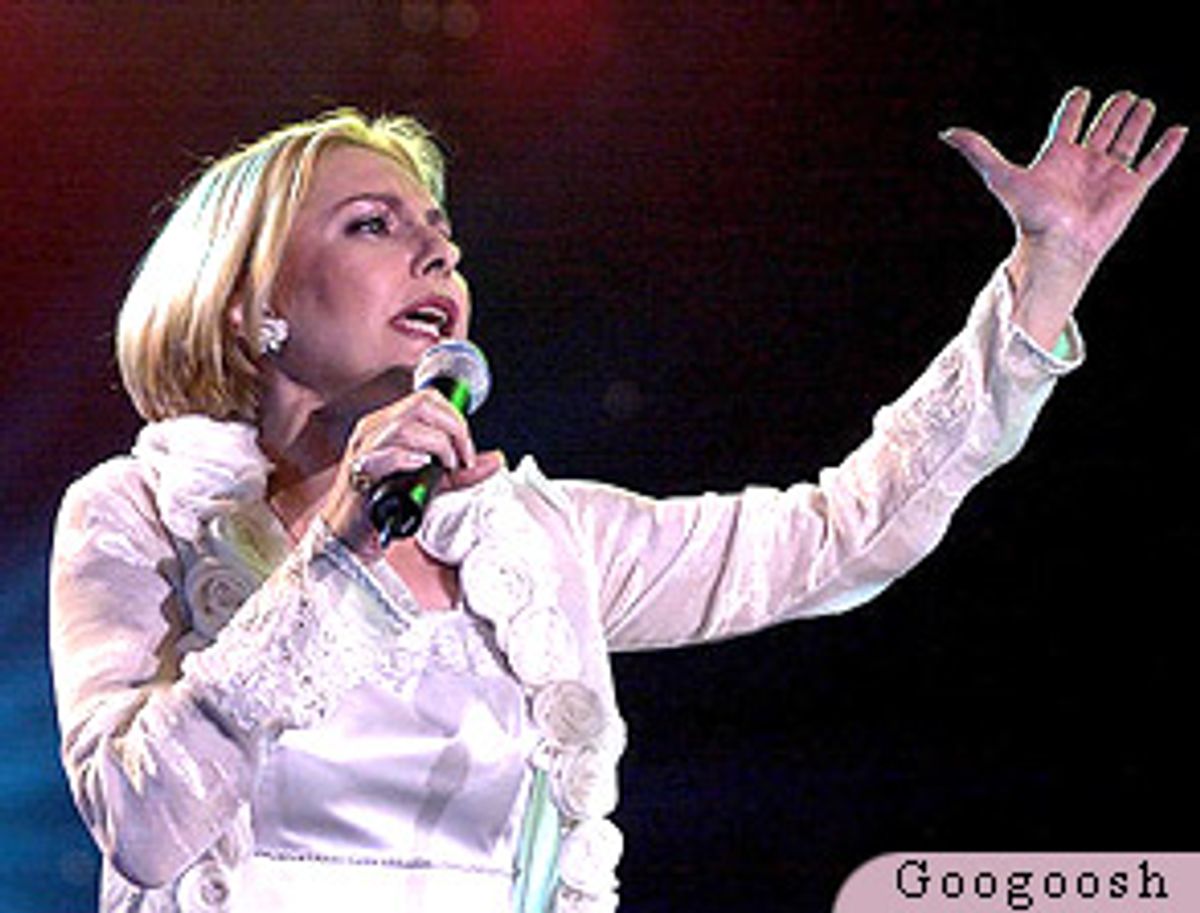 Googoosh, the stage name of the pre-revolutionary Persian pop diva Faegheh Atashin, is as famous in her homeland of Iran as Elvis is here. But trying to relate the importance of the singer to an American audience feels like one of those desperate Hollywood movie pitches: It's "The Bodyguard" meets "Not Without My Daughter," or maybe "A Star is Born" meets "The King and I."

Maybe the closest American scenario would be to imagine that a Jerry Falwell-style revolution had taken place in the States, a brutal theocracy had been established and some sort of Barbara Streisand/Madonna hybrid had been banished from the stage on religious grounds. Then, after a decade or two of seclusion the Babs/Material Girl combo is permitted to leave the U.S. and embark on a world tour. Abroad, she's greeted by thousands of cheering American refugees who, in their longing to return home, eat up her nostalgic offerings and beg for more.

There is no real American equivalent to the story of Googoosh. There have been no revolutions here of late, and pop singers have long lost any real political significance.

For thousands of Iranian expats, however, it's big news that Googoosh is kicking off her yearlong world tour in North America (before going to Europe and the Middle East). Having already played to sold-out stadium crowds in Vancouver, British Columbia, Toronto, Los Angeles, New York and Houston, Googoosh has even more momentum for her dates in Oakland, Calif., Dallas, Atlanta, Chicago and Las Vegas. As for the fans who last heard her sing in pre-revolutionary Iran, the possibility of hearing Googoosh live in America hangs like some fantastic dream; in the suspended reality of Iranian politics, it could be a sign of change, or merely the red herring facade of a regime hoping to present a kinder, gentler face to the outside world.

Googoosh's is a story many Iranians have taken to heart, her sufferings resonating with their own. She began her career as a child star, and hit her peak in the '70s Tehran cabaret scene -- condemned as "decadent" by the mullahs -- as a singer, dancer and actress.

She fled Iran on the eve of the revolution, only to return a few months later. Although she escaped the fate of many artists who faced brutality at the hands of the regime, Googoosh did receive a brief jail sentence. But her real punishment came in her banishment from public performance, as the new ruling class declared women's voices to be "demonic," and initially prohibited almost all forms of music but prayers and revolutionary dirges. So when Mohammad Khatami's reformist regime returned Googoosh's passport earlier this year, the end of her 20-year seclusion -- and her return to the concert stage -- surprised and delighted Iranians at home and abroad.

One question hovers over the current tour: Will Googoosh return home to face threats from fundamentalists opposed to her concerts? Or, as is rumored, will she face the regime's wrath and defect to Canada, where her brother has resided for several years, or perhaps to Los Angeles, where her son lives?

And all this at a time when Iran appears on the verge of another revolution; when President Khatami's reformist agenda is foiled at every turn by hard-line clerics, bent on maintaining power; when scores of dissident artists and intellectuals are being harassed and even murdered by government agents both inside and outside of Iran, and when the nation's young people (70 percent of the population is under 25), many of whom never experienced pre-revolutionary freedom, are chomping at the fundamentalist bit.

Although Googoosh is still banned from public performance in Iran (and arguably outside as well -- the regime merely returned her passport, it did not explicitly OK her concert tour), her career has been kept alive by an impressive fan base at home and abroad. Her music remains potent, with its evocation of exile and inducement to nostalgia. Googoosh's voice and image have lived on through a number of Web sites and an underground network of pirated cassettes, manned largely by fans who are too young to remember her success.

For fans in Iran, her music has become a subversive and sometimes illegal pleasure. The laws prohibiting "decadent" pop music have been relaxed; now only "trafficking" remains a crime. Possession, once strictly regulated by the pasdaran, or religious police, is allowed.

Nowhere is this more evident than in Los Angeles, home of the world's largest Iranian expat community. Last counted at 700,000, it's also the Iranian pop music epicenter. Many singers fleeing Iran came here in 1979, and it is from here that the illicit cassettes and CDs are now smuggled into Iran.

Googoosh's Aug. 18 performance at the Great Western Forum in Inglewood proved the most incendiary of her concerts to date. She'd drawn crowds of up to 10,000 in Canada, but this concert sold out all 15,000 seats in two days, with scalped tickets going for as much as $1,000.

It was also the only performance so far to receive a bomb threat. The threat proved to be a false alarm -- Inglewood police received an anonymous call that led to the discovery of "several flares attached to a battery." But that a pop concert could ignite such a violent emotional response is a testament to both Googoosh's impact and the powerful divisions within Iran and its expat communities.

No one has claimed responsibility for the bomb threat, but Googoosh can certainly boast a wide range of detractors. Some local Iranian Jews were reportedly upset by rumors that Googoosh had made anti-Semitic remarks in an underground cabaret in Iran; because the venue was forbidden in the first place, no witnesses have been willing to confirm or deny the accusation. The singer also managed to alienate many Iranian pop stars in the L.A., or "Tehrangeles," scene, by allegedly making disparaging comments about their "lack of talent." Of course fundamentalists in Iran, who have already condemned Googoosh's current tour, do have their counterparts in Los Angeles.

Finally, some feel that her tour somehow legitimizes what they see as the reformist facade of a brutal regime. Sharvand, an Iranian-American newspaper, published a letter on September 1 written by Abbas Bakhtiari, the head of Pooya, an Iranian cultural association based in Paris. In the letter, Bakhtiari, who was to be the promoter for the European leg of Googoosh's tour but pulled out at the end of August, alleged that Googoosh's Iranian promoter, Manouchehr Khoshzaban, was working for Iranian intelligence. While both parties have been unavailable for comment, some in the Iranian-American community speculate that the accusation was no more than the consequence of a bitter business disagreement.

This argument, after all -- that Iranian artists and other popular figures are used as "ambassadors" for a corrupt regime -- is not new. Nor is it restricted to old Shahists; the leftist Mujahedin is also fond of this position and has foisted it upon everyone from visiting filmmakers to the national soccer team that toured North America last year. But many Googoosh fans argue that it is unfair to burden artists with political baggage. As Ramin Mahjouri, editor of Paivand, a leading Iranian newspaper in Vancouver, said, "She is just a singer. Let her sing!"

The atmosphere around the Forum concert was much more like a party than a political debate. For hours before the concert started, the streets around the venue were crammed with Mercedes and Range Rovers carrying perfectly coifed Iranian girls and their Armani-clad, cellphone toting escorts. The parking lot became an impromptu meeting place where friends and family caught up on each other's news.

In an Iranian Robert Altman moment, an earnest young crew of Persian UCLA students, claiming to be producing a documentary about Googoosh's tour, trained their cameras on the fracas breaking out at the box office. As fans argued with Forum employees over tickets, a stranger warned me about some of the other video cameras casually filming the fray. "Watch out -- they could be agents," the man whispered before disappearing into the crowd.

Once the outside show gave way to the inside one, Googoosh did not disappoint. Radiant in a white gown and faux-diamond tiara befitting the queen of Iranian pop, she had her audience enthralled. Silencing the thunderous applause with a regal wave of her hand, Googoosh, sporting a blond Hillary Clinton 'do, launched into two hours of hits from her glory days.

The impressive performance was almost overshadowed by the huge emotional response of the audience. Carrying banners in Farsi bearing poetic proclamations of love and support and shouting out, "We adore you, Googoosh," the ecstatic and often tearful fans had a quasi religious quality, ironically reminiscent of a mass Shi'ah ritual.

But in this case the opiate of the masses, and a key factor in the concert's success, was an undeniable nostalgia. As the official program read, those pre-revolutionary times were "days of pure happiness" (despite, one assumes, the excesses of Savak and imperialist oil barons).

"I have been in L.A. for 20 years, and the whole time I've been listening to her old cassettes and keeping pictures of her from before," said Mina Bajhdadi, 33. "Seeing her here tonight is like going back home."

With her throaty, expressive alto, Googoosh proved herself a consummate performer, the kind who can work a crowd. Singing old favorites as well as a few songs from her new CD, "Zartosht," Googoosh and her 14-piece band mixed Persian melodies, Edit Piaf-like chanson Francaise, electric guitar riffs and rumba flamenco rhythms reminiscent of the Gipsy Kings. The biggest cheers of recognition came when Googoosh sang the theme song from "Divorce," an Iranian soap opera popular in the '70s.

Any serious reflection on the political significance of Googoosh's comeback was reserved for after hours at the nearby Hollywood Park Casino. As well-heeled guests looked out onto the moonlit racetrack, girls in sequined slip dresses danced to old Googoosh tunes and retro-disco hits. But for the American waiters serving roast beef on Wonder bread, it could have been '70s Tehran.

"No one is happy in Iran with the current regime. The people feel betrayed by the false promises of the revolution," said Hossein X, a 34-year-old investment banker who refused to give his last name citing "security concerns." "The poor and the middle classes are worse off now than they were 20 years ago."

Hossein added that the "decadence" of the '70s was nothing compared to what is going on now. Promiscuity and drug abuse, he claimed, are more prevalent than ever, especially among young people, who Hossein said are simply bored. "This is their way of rebelling against the regime," he said.

"Googoosh," said Hossein, "is a symbol of the people's resistance. She could even become a catalyst for a counter-revolution."

It remains to be seen how much Googoosh's concert tour will stir things up in Iran, but the buzz around her comeback in America is unprecedented. Miles Copeland is rumored to be considering a purchase of Googoosh's entire catalog of songs, and Chanel has expressed interest in providing her concert wardrobe. Can major corporate sponsorship or even Hollywood be far off?

While the "Great Satan" will no doubt continue to tempt the formerly "penitent" cabaret star -- to the chagrin of fundamentalist mullahs -- it's anyone's guess how Googoosh's story will end. A decision to return to Iran after her tour would be a big step. With violent clashes between pro-reformists and hard-liners as recently as a month ago, Googoosh could find her homeland in turmoil as dramatic as that which she fled over two decades ago.

Canadian journalist Hadani Ditmars recently returned from a month in Baghdad. She has been published in The New York Times and The Independent, and her radio work has been broadcast on the BBC.