To revive a dying campaign, Pat Buchanan travels to Bob Jones U. and attacks gays, the U.N. and the Supreme Court. 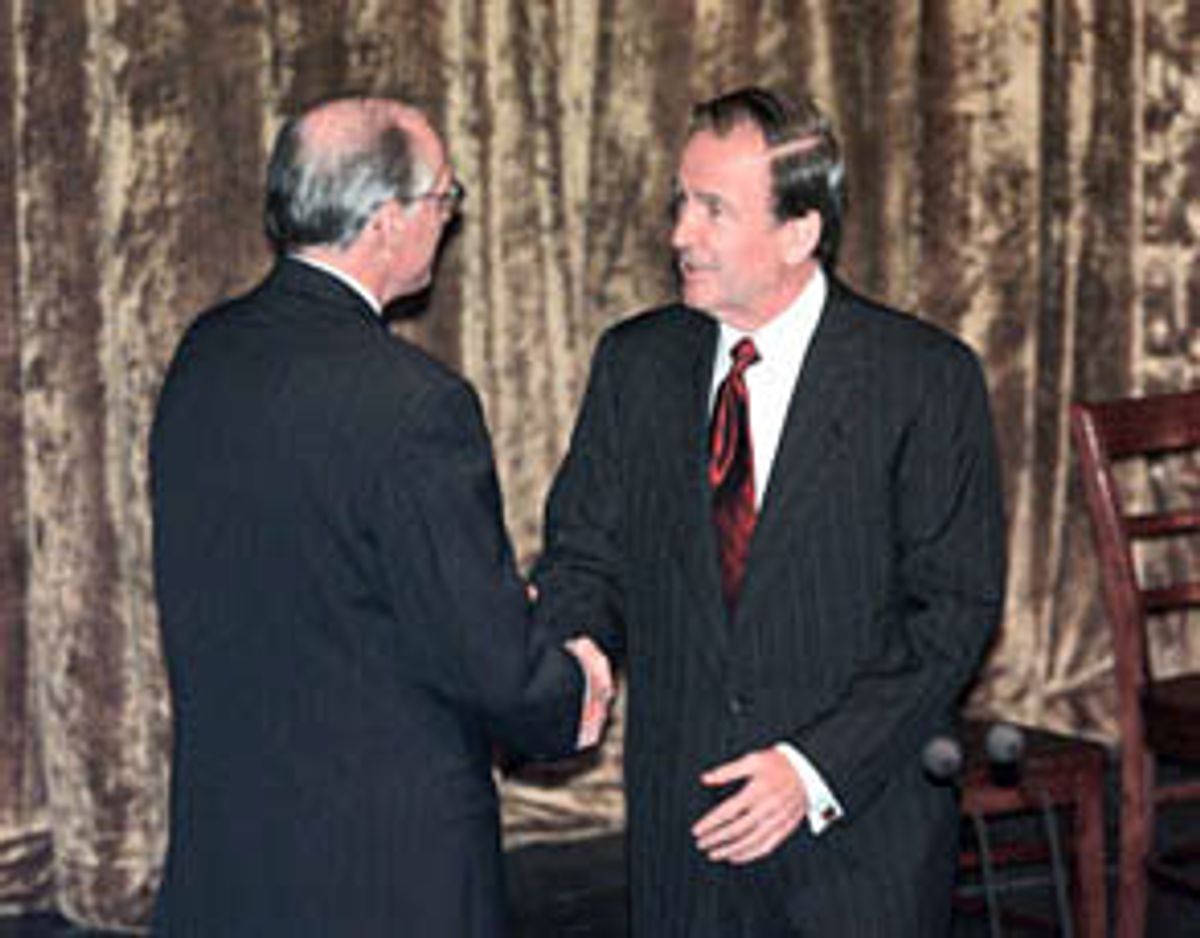 Who would've ever thought that veteran bomb-thrower Pat Buchanan would have to hunt for attention? At least he knew where to look. The Reform Party nominee -- or the one with the money -- made a sojourn to Bob Jones University to relaunch his presidential effort after gallbladder surgery and months of virtual invisibility.

And he showed plenty of gall. The former conservative commentator unearthed all the demons that the right-wing culture club couldn't talk about in the kinder, gentler convention fashioned by George W. Bush. Gays, immigrants and the United Nations were all on the menu, and Buchanan dug in his pitchfork like a starving man.

Of homosexuality, Buchanan told the crowd that it had once been considered "the love that dare not speak its name," giving Bob Jones students a likely unfamiliar dose of Lord Alfred Bruce Douglas. "If you watch the talk shows all over America," he continued, "it is the love that will not shut up."

At one point, he sounded almost compassionate speaking about the third world poverty conditions in Mexico -- before warning in the next breath of thousands of lawless immigrants charging the border. Buchanan's solution: Pull troops away from United Nations missions abroad and put them "where they belong, on the borders of Texas, New Mexico and Arizona."

Wresting American armies from the evil clutches of world government wouldn't be the end of his plans to put the U.N. back in its place. Buchanan also promised to evict U.N. Secretary-General Kofi Annan and his meddling friends from American soil within a year of assuming the presidency. "If you have trouble leaving," Buchanan said he would tell Annan, "we'll send up 10,000 Marines to help you pack."

But the star villain was something closer to home than the United Nations or Mexican immigrants or even homosexuals. It was the federal judiciary. "They have dethroned our God," Buchanan railed, blasting the Supreme Court for such sins as striking down partial-birth abortion bans and forbidding prayers over the public address system during public school football games.

Some of the more grave offenses had less specific forces behind them. "They" were to blame for abolishing Easter, taking Nathan Hale out of history textbooks (all of them?) and smearing George Washington for owning slaves. "They" called Christopher Columbus a "genocidal racist" and blasted the movie "The Patriot" for being gun-happy.

In this year of mushy, toothless rhetoric, there was something shocking about Buchanan's call to arms, though it's nothing he hasn't said before. His remarks were a retread for his infamous "Cultural War" address to the Republican Convention in 1992. He admitted as much, and half-bragged that the speech had brought an end to uncensored remarks at political conventions.

It's no wonder that Buchanan still pines for the old days when he was a Republican. Back before he had won a nomination anywhere, before he'd received millions of dollars from the Federal Election Commission, people paid more attention to him. When Bush the First and Bob Dole worried that their conservative bona fides were lacking, Buchanan could get a party-sponsored podium and a gaggle of reporters every time he opened his mouth.

But since he struck out on his own in 1999, Buchanan has faded from true right-wing threat to sideshow. After the Reform Party circus ended in a catfight between Buchanan's forces and those supporting John Hagelin, the former conservative commentator was written off as a joke, and Green Party candidate Ralph Nader became the designated spoiler of the campaign. Even worse for Buchanan, in the intervening weeks since his convention fiasco, the race between Bush and Gore turned out to be a story. Plenty of drama, plenty of suspense and no need for a walk-on by America's favorite reactionary. Not even one carrying $12.6 million in his pocket.

That didn't matter to the Joneses. To this school -- after a year of having its reputation roundly trashed by others, even other Republicans -- he's still a star. About a thousand mostly white youngsters -- young ladies in long skirts and many young men in shirts and ties -- cheered vigorously at all the calls to battle. Before Buchanan came onstage, they had filed into the lower level of the school's Rodeheaver Auditorium and waved their hands for Buchanan/Foster signs.

Ezola Foster herself, Buchanan's black running mate, was conspicuously absent from the stage. "She's campaigning," said Buchanan aide K.B. Forbes, though he couldn't be sure where. Her absence dropped the minority population in the hall to about three or four, minus the occasional reporter.

The lack of color was little surprise to those familiar with the school's history. For decades the school -- with its anti-Catholic teachings and ban on interracial dating -- was a dirty little secret on the Republican campaign trail. But Bob Jones got caught in an unwelcome spotlight when Bush started his South Carolina primary effort from its stage. That led to a barrage of nasty publicity, including questions about its rules forbidding interracial dating and its stated doctrine that classified the Catholic Church as a cult.

Monday night, however, there was no sign of repentance. "We make no apology for being out of the mainstream of American society," said school president Bob Jones III. He later praised Buchanan for standing by Bush's decision to visit the school during the South Carolina primary, but he had less kind words for some unnamed candidate who sought to "talk like Gore" and pretend that there was no need for raised voices and fists this election year.

From the tone of Jones' remarks, it was apparent that Bush had been something of a disappointment since his February visit. At that time, reeling from an unexpected loss to John McCain in the New Hampshire primary, the Texas governor ran to the embrace of the party's right wing. But later in the campaign, after McCain had been vanquished and Bush was feeling more compassionate, the Texas governor sought to distance himself from the school and pleaded ignorance of the more icky aspects of its policies.

But not everyone agreed that it was time to blame Bush. A lone student had written on the back of his Buchanan campaign sign "Pat Who?" so that it was visible only to those in the press balcony. The Bob Jones student preferred not to give his name, saying that he wanted to know why Buchanan had left the GOP. "It's an inclusive party, and it's easier to make changes from within than without," he said. After the reporters had stepped away, one of the student ushers asked him to leave the arena and stop talking to the press.