In the wake of a scandal involving his closest aide, Peru's president calls for new elections and says he will step down. But can he be kept to his word? 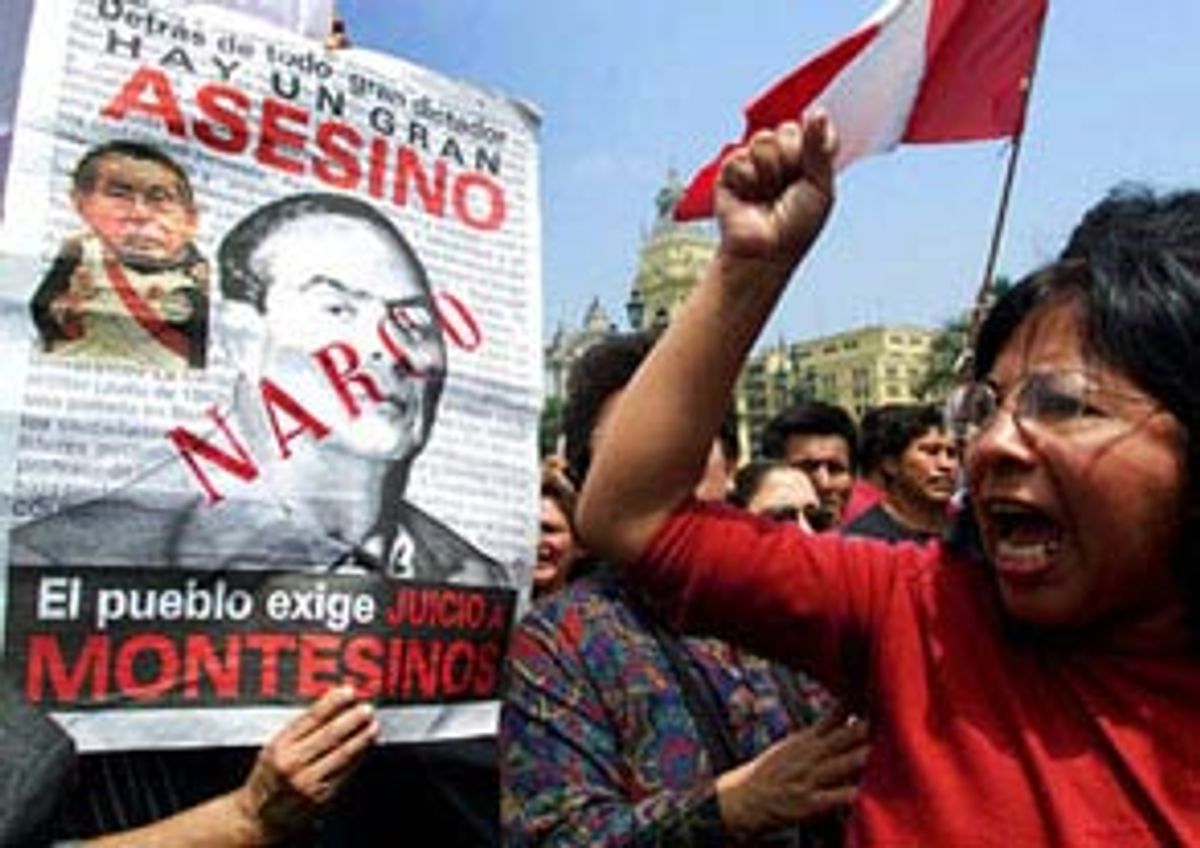 Citizens immediately took to the streets in celebration after Peruvian President Alberto Fujimori's surprise announcement Saturday night that he would step down "as soon as possible" and call new elections. Fujimori's decision shocked the nation, left even detractors scratching their heads and raised new questions about the future of Peru's relations with the United States and its role in the war on drugs.

"I was in a bar with friends and heard the news on television," says student activist Paulo Sandoval. "People immediately jumped up and started hugging each other and cheering. But after 10 years of enduring Fujimori, I felt strange. It was something that no one thought would happen."

Monday, the initial euphoria had subsided, and a mood of tension and near-panic was descending on Peru as its citizens began to ponder what will happen next.

Fujimori's decision, which also includes deactivating the country's powerful National Intelligence Service, is clearly linked to Thursday's broadcast of a videotape on the cable channel Canal N, which showed the president's close advisor, Vladimir Montesinos, paying a former member of the opposition to defect and join Fujimori's party. Transcripts of the tape detail Montesinos' plot to acquire opposition politicians after Fujimori lost control of the Congress in last April's elections, and allude to the real influence the de facto head of Peru's National Intelligence Service (SIN) holds with the president. Since the vote, 13 opposition members have defected to Fujimori's Peru 2000 Party, giving it the majority in Congress -- but now many are questioning whether those defections were the result of bribes.

There have been no further statements from Fujimori since the announcement -- a silence that has fueled rumors and fear. Members of both Peru's ruling coalition and its opposition are calling for the arrest and trial of Montesinos for corruption. Contradictory reports have circulated about Montesinos whereabouts. Several news agencies report that Montesinos is being held in the SIN headquarters under orders from Peru's military commander, Gen. Jose Villanueva Ruestra, but they remain unconfirmed. But Peru's justice minister has stated publicly that Montesinos is not being detained.

"One begins to feel a bit hysterical because Fujimori hasn't told us what really happened, and no one knows where Montesinos is now or what is happening. It's a total mystery," says Sandoval. "I'm totally certain that Fujimori has something planned," says the activist, who has received threatening letters for his participation in anti-Fujimori rallies. "I can't believe that after fighting so hard for a third term, he'll give up power this easily."

But respected Peruvian political analyst Fernando Tuesta says he's certain Fujimori will step down. "I think that Fujimori never really wanted to run for a third term because he knew there was a danger that all these things would come out. Certainly, he loves power; I'm not saying he wanted to give that up, but I think he was afraid that some of these things would come to light and the video scandal gave him a graceful way to bow out."

Since Fujimori first announced his intentions to run for an unconstitutional third term back in 1996, rumors have circulated that Montesinos was behind his decision. Peru's new constitution, rewritten by Fujimori in 1992, limits presidents to two terms. But Fujimori's allies in Congress came up with a tricky solution: He was originally elected under the old constitution, which didn't bind the president to such pesky limitations, so he shouldn't be obligated to observe the terms of the new one. When Peru's consitutional court ruled against Fujimori, he came up with an easy workaround -- he fired the judges. When Fujimori was first elected as the surprise candidate in 1990, the former university rector had no legitimate party or power base. Observers say Montesinos came forward with a circle of powerful military officers and agreed to back Fujimori in exchange for control of the powerful SIN, Peru's answer to the CIA.

The opposition has been quick to unite against Fujimori's government since the airing of the video -- with opposition members effectively paralyzing the government by shutting down Congress until Montesinos is arrested. Most opposition politicians have never accepted the results of the presidential elections last spring, which were marred by allegations of fraud.

Alejandro Toledo, Fujimori's main challenger, refused to stand in a runoff ballot this May following reports from monitoring missions that conditions did not exist for a free or fair vote in Peru. Even the usually complacent Organization of American States withdrew its observers from the election and afterwards mounted a high-level mission to push for a series of democratic reforms in Peru, including the removal of Montesinos from his post. In the aftermath of the elections, U.S. and Canadian delegates to the OAS pushed for harsher measures against Fujimori, but they were held back by other Latin American states such as Venezuela.

Recent U.S. pressure on Fujimori comes after years of waffling over human rights abuses under his regime. Critics have charged the United States with brushing aside Fujimori's human rights record and authoritarian tendencies because of his favorable position on economic liberalization and his perceived role as an ally in the U.S. war on drugs. Indeed, unlike leaders in Colombia, which has been divided by civil war, Fujimori, aided by Montesinos, has been successful in combating cocaine traffickers and militant guerrillas in Peru.

Coletta Youngers, a senior associate at the Washington Office on Latin America, says that before Peru's contested elections, the country was seen "as one of the countries posing less problems for the United States. There was a tendency to minimize the situation in Peru and focus attentions on Colombia."

But fears of instability during the elections led to a policy turnaround at the U.S. State Department. "There came a moment of panic in Washington over what could happen, more in the post-electoral period, especially if Fujimori won and his rule was not considered legitimate, leading to instability," said Youngers.

The clincher was a scandal that erupted in late August, when members of Peru's military were linked to an arms-dealing ring of Colombian Revolutionary Armed Forces (FARC) rebels. The revelations came on the heels of a $1.3 billion U.S. military aid package to Colombia -- intended to help fight drug trafficking and bring an end to that country's civil war. The controversial Plan Colombia ignited fear in Washington that the U.S. might be getting itself into another Vietnam.

Then the damaging video was released, prompting John Hamilton, U.S. ambassador to Peru, to call on Fujimori to take "clear and energetic steps to restore public confidence in the intelligence services." But analysts say the behind-the-scenes pressure was greater.

Mirko Lauer, a columnist with Peru's opposition newspaper, La Republica, says he believes Washington pressure played an important role in Fujimori's decision to step down. "Think about it. Right in the middle of launching Plan Colombia, the U.S. discovers that Peru is selling arms to the rebels. This puts us on par with 'rogue governments,' a designation usually reserved for nations outside the Western Hemisphere."

Scant days after the arms scandal broke, scrambling to save face with the U.S., a Peruvian military court granted a new trial for Lori Berenson, an American serving a life sentence in Peru on terrorism charges.

But the U.S. has always taken a lukewarm position on Berenson, calling for a new trial rather than her unconditional release. Observers say that if the new trial for Berenson was meant to mend tattered relations between the two countries, it was too little, too late.

Regardless, now that Fujimori plans to step down, there is concern about what that might mean for Berenson's trial. Pending cases may be put on hold while the country's judiciary is revamped and new, independent judges replace disgraced magistrates, who have long been viewed as puppets of Fujimori's government.

Berenson's parents released a statement in light of Fujimori's announcement, calling for her immediate release. Benjamin Ziff, spokesperson for the U.S. embassy in Lima, says he "does not believe it is appropriate to speculate in this case," saying it is too soon to know what impact Peru's new political climate will have.

But analysts like La Republica's Lauer believe the proceedings will continue, and that Berenson's case will be heard in a civil court as planned. A judge is currently reviewing the case and is due to submit his report to Peru's attorney general, who will decide on the charges within the next few weeks.

Lauer speculates that a new, legitimate government could be the worst development for the Berenson lobby. "Her supporters have gained strength in the face of a dictatorial government, but it will be more difficult for them to attack Peru's justice system faced with a democratic government," he says. The columnist also points out that Peruvian public opinion is largely against retrying Berenson. "A new government will have to take a strong position against terrorism, and this could hurt Berenson's case," he says.

For their part, Peruvian human rights organizations have kept a healthy distance from Berenson, preferring instead to concentrate on the hundreds of cases where Peruvians were convicted with virtually no evidence against them, many simply because a neighbor pointed a finger.

Erika Bocanegra, a representative of Peru's non-governmental National Coordinating Office on Human Rights (NCOHR), says she hopes that once Fujimori is out of the way, alleged human rights abuses committed during his rule, including innocents in jail, civilian massacres and disappearances, will be investigated.

"We have to remain calm right now, because the story has changed so many times over the past few days," she says. "I think that this week will be one of decisions and clarifications."

Until then, Peruvians are left nervously wondering when Fujimori will step down and what will happen afterwards. Most analysts say there must be a transition government lasting between four to six months in order to rid the country of what has been referred to as "Montesinos' power mafia" and prepare Peru's discredited electoral board for fair, transparent and democratic elections. The big question is whether or not Fujimori will remain at the helm through this transition, or whether he will turn the reins over to an impartial party, like Jorge Santistevan, the government's ombudsman and only high-profile official with public credibility.

NCOHR's Bocanegra says that unless Fujimori steps down and Montesinos is arrested -- or definitely removed from power -- the country remains in danger of electing another "banana republic" government, with new faces but the same forces behind the throne.

"At first I was cynical -- Fujimori has used so many tricks to remain in power during his regime -- but now I'm hopeful that it's really true, that things can change. But it feels a bit like a lover's deceptions. You give them so many opportunities until in the end, you can't believe anything they say."

Stephanie Boyd is a freelance writer in Lima, Peru.