Mary Lou, a teenage prostitute, turns to a married man for protection and starts to like him, maybe a little too much. Part 4 in a series. 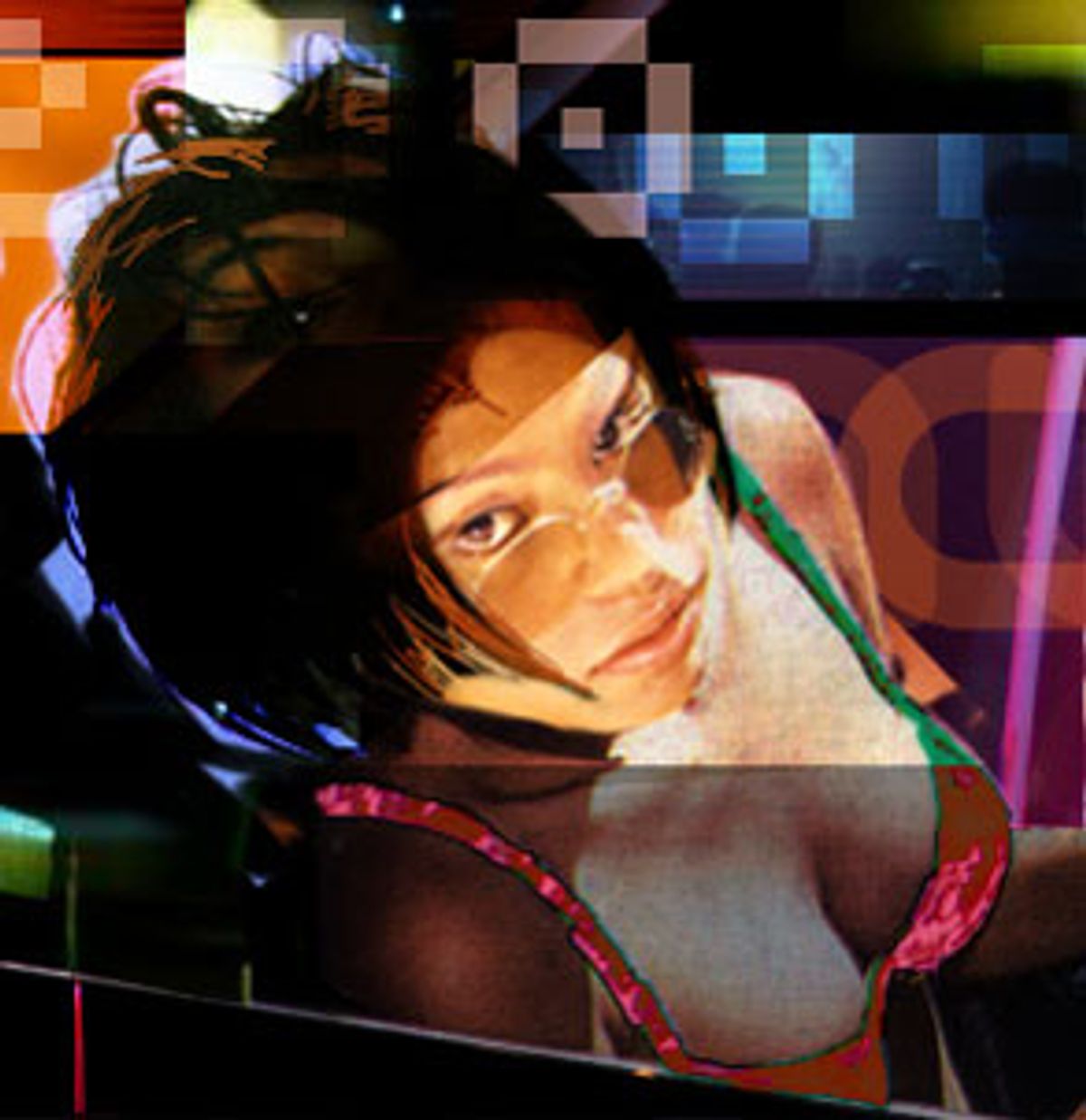 One night in early July, Mary Lou took a bus and a subway into D.C. to interview a pimp. The closest thing she'd had to a protector was "First Guy," her sole client for almost a year. It was First Guy who introduced her to her second and third clients; he had her call him from any new trick's home or hotel room to make sure she was safe. She'd been pestering him for a year to cosign with her on an apartment.

But First Guy faded away this summer. He told her to get a passport so he could take her to Europe, but he took his fiancie instead. Mary Lou has seen him only once since May, and she now makes the safety phone call to her aunt. So when Mary Lou met a man who told her he could get her more clients in exchange for a percentage of her earnings, she arranged to meet him at a small nightclub in a rough part of Washington.

She waited for the man for more than an hour and then struck up a conversation with three guys standing outside the club. They asked her her profession; she told them, "I escort." They invited her to their house, "just to party," and started watching a movie on TV. One guy led her upstairs into a bedroom and inquired about her price, and Mary Lou told him $200. When he protested, "I can get a girl on the street for 20 bucks," she said, "Well, I don't work the street. I wasn't working the street when you met me and this isn't how I do business, and I charge this much for an hour."

He went downstairs and as she began to follow him, a second guy came up. He also bartered with her, then suddenly began cursing and yelling, "That's too much, and you're not all that anyway." Then he pushed her onto the bed, tore off her jeans and raped her.

She ran out into the street, crying, and flagged down a car full of strangers, who drove her straight home. She never went to a hospital, even though the next day, she said, "I couldn't even walk; it hurt to use the bathroom; I felt like my insides had been ripped out." She stayed in bed for three days.

She didn't call the police either, "because I thought it was my fault ... I should have known better than to go with those guys. And I should have fought harder, but he was big, one of those guys who go to the gym every day ... I didn't know what he was capable of, and I'd heard you should just let them do it and get it over with."

Guilt often follows rape like a confused ghost, haunting the victim as if she were the perp. A month and a half after the fact, Mary Lou had put a practical spin on her self-blame. She says the rape "made me tougher, more businesslike; it made me realize the game. Prostitution is a game and you have to know how to play it or you'll get burned. You don't know who you're playing with, but there need to be rules you follow yourself. You can't make anyone else follow your rules, but following your rules can help you win, help you be a winner."

At this point, Mary Lou's speech shifts subtly from motivational self-help to defiant gangsterette. This little redhead from the boondocks starts talking like a black girl from the ghetto: "The way I was playing that night wasn't right. I shouldn'ta told them or went with them. But I learned and I changed up right after that. I changed up."

Two weeks after the attack, she bought a 5-inch knife at a sporting goods store. "I wouldn't hesitate to use it," she says. "I wouldn't stab to kill, but I'd stab him in the leg, so I could run and get away." The other changes she has made are not telling everyone who asks that she "escorts." She replies instead that she waits tables and, to explain her beeper, that she "does office-type errands." Furthermore, "I don't go with anyone who's not alone; I don't get in vans or trucks, don't get with anyone big who could really hurt me. I tend to go with people who are small, who I could probably take them or get away from them." Mary Lou is 5-1 and weighs maybe 100 pounds.

Our second interview was on Labor Day, a holiday Mary Lou was observing because she had her period. I picked her up at a gas station near her house, and we went to a chain restaurant in a strip mall. She wore a black tank top that read "Foxy 69" and baggy jeans.

Her beeper kept going off because her new ad had come out the previous Thursday. She turned 20 in July, but her ad says, "Sexy 18 y.o. aims to please. Older, professional men only." Mary Lou's lying about her age, she explains, "because I'm selling my youth and innocence."

But even with that lucrative schedule, Mary Lou couldn't get her own apartment without paycheck stubs to show she has a steady job. (She rents a room now from a Korean woman who's starting to ask questions about her odd schedule.) This is why Mary Lou needs First Guy to cosign for an apartment. "I was with him for two years, I prioritized him, treated him the best -- he should have done more for me," she says angrily. "But I don't care; screw him, I don't need him anymore. There's a lot more out here."

And sure enough, in August a new prince pulled up -- let's call him "Mack." Mary Lou is vague about how and where she met Mack, but they got to talking and she accompanied him to his house. She won't say what he does, just that he's a 25-year-old black man with a wife, a child and a lot of money. "His business is a little seedy," she allows, "but I'm not going to get into details."

They discussed their jobs at Mack's place. He said, "There's nothing you can do for me sexually, but if you want more clientele, I could help you." He also offered to get her a gun, a bodyguard, a driver and someone to "take care of" the stepbrother who'd abused her as a child. Mary Lou hasn't told Mack about the rape, by a black man, in July.

She told Mack she was interested in his offer, but says she doesn't want black clientele. "I like to keep my business and pleasure separate." She elaborates on this policy, which is new since she and I first met in the spring: "I like to go out with black guys, I like to, you know, be with them, but I like to do my business with white guys. Just because it keeps it separate ... I'm not attracted to white men, not anymore. Since I've been doing this, I just don't like them."

She worries that the black-for-fun, white-for-business distinction is "racial of me, but I like black people better. I like their attitude, I like their looks. I like the fact they know how to have fun and they're not as uptight as white people ... I can be myself and talk the way I want to talk, y'know, and have a good time. My parents are racists, but I didn't get that from them."

That first day at Mack's, Mary Lou stayed for five hours and their courtship blossomed. Mack complained that his wife spent all his money but hadn't cooked, cleaned or had sex with him in over a month. Then he sighed, "But you're too small; there's nothing you can do for me." The challenge inspired Mary Lou and she retorted, "I've got a fat butt," which she then displayed.

Mary Lou's presentation was all it took: "After he saw my butt he was attracted to me," she says proudly. "I told him my fee was $200, and he said fine. And he paid me my money and we did it and he was like amazed. He was saying, 'I can't believe you did this to me. No girl has done this to me and I'm around beautiful women every day. It's not just the sex, it's the conversation, it's you, it's everything.'"

The display of emotion startled Mary Lou. "This guy's like a straight-up, thugged-out guy, and [all the complimenting] isn't right. It scared me, but he was like, 'I'm not trying to scare you, I'm just trying to be honest.' And he was -- everything he told me, about business, his feelings, his wife, me, what I do, he was honest."

After the trick, Mack declared, "I want that all to myself," and he asked Mary Lou what it would take to get her out of the business. Mary Lou answered, "A lot. I want to go to school, I got car payments, I need to pay my bills, and those are the things that are important to me." Mack told her, "Don't worry about it, you're not going to be doing this much longer."

Then Mack asked where she shopped. Mary Lou said, "What do you mean? I go where I get the cheapest clothes." And he asked, "Well, what do you like?" Mary Lou admitted a fondness for Versace and Prada, and Mack replied like a benevolent father: "We'll have to get you something." Mary Lou says a bit sheepishly, "He couldn't believe I didn't have anything -- him and his wife are so decked out."

Mary Lou's agonizing over Mack is twofold: She's a girl with a crush who's also on tenterhooks about a job interview. "I'm wary, and I'm trying not to get my hopes up," she says, "but he seems really sincere. He seems like me with my feelings. I just put my feelings out there, and I've never met a guy who was so much like me that way. I don't know if it's because we're both July born or what."

A few days before our interview, Mary Lou had spent a day with Mack. He seems less anxious now to take her away from the business. Her ad had come out the day before, she says, and "my pager was blowin' up. He was like, 'Damn.' I apologized for being on the phone so much, and he said, 'No apologies. I love it when a woman can make money. I like hearing women do business.'"

Prostitution shows Mary Lou human detachment, but rape brought her face to face with human savagery. She's scrambling to adapt to life in a jungle, and Mack looks like a king with his guns and drivers and Versace and goon squads. Mary Lou sees the thug, but she also sees a winner. Mack values her youth and innocence, and more important, he can help her sell it.