Did Phoenix Stone blow his chance to be larger than life? 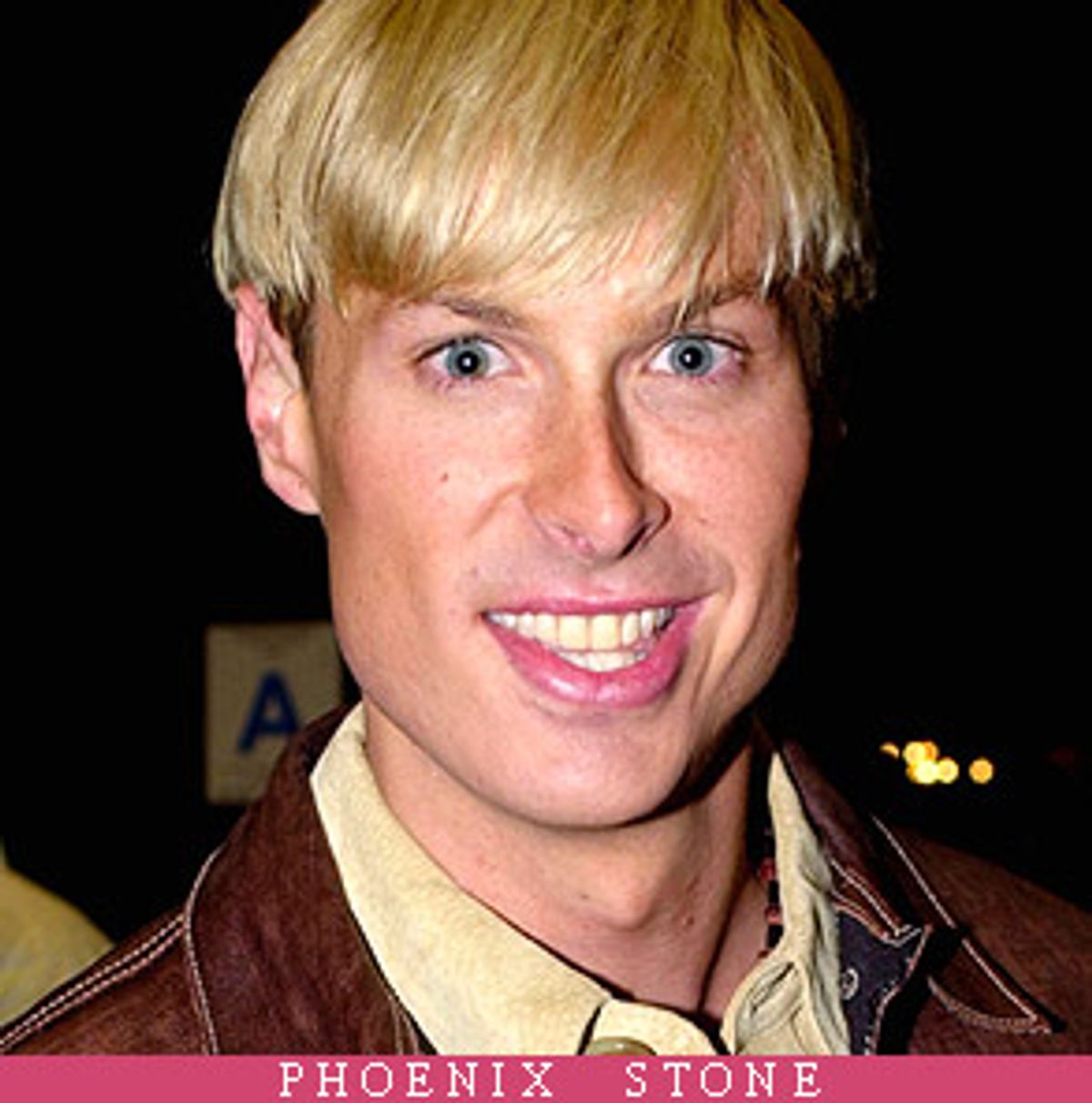 That's when Stone, then a member of a fledgling five-member musical troupe, decided he would rather try to make it as a solo act. During a post-rehearsal limo ride, he told his manager, Lou Pearlman, that his mind was made up.

The Backstreet Boys would have to forge ahead without him.

On Sept. 12, Stone saw the release of his latest single, "Still Be Loving You," which he contends will earn Top 40 rotation. The really big day, though, is set for Oct. 24 on Universal Records. That's when -- after six years spent "growing as a musician"; after watching his former bandmates become huge in Europe, return to the U.S., and get even bigger; and after the Backstreet Boys, by then the toast of MTV's influential "Total Request Live," released their second album, "Millennium," which sold a record-breaking 2.2 million copies its first week out of the box -- after enduring all that, waiting his turn, Phoenix Stone will at last have his chance to make it big.

Finally, his own career will begin to take off.

Or maybe not. Maybe, for Phoenix Stone, it won't be worth the wait, after all.

If Stone harbors any doubts about his success, they weren't on display when we met at the Paramount Hotel in midtown Manhattan recently. On his album cover, Stone appears as a hulking, tank-top-wearing figure, his supersize biceps fully flexed for the camera. But in person, Stone looks more beanstalk than beefcake, his rangy, 6-foot-plus frame clad in a short-sleeve, royal blue button-down, two surfer-style necklaces, jeans and sandals, all topped with smoldering blue eyes staring out intensely from under impossibly blond bangs. His face -- all angles in its high cheekbones and long, skinny nose -- opened up when he spoke, giving him an affable air.

Mindful of his prized vocal chords -- he says he has a six-octave range -- Stone ordered a liter of bottled water, lemon slices on the side.

We get down to business. What the hell, I ask, was he thinking?

"Let me tell you about the Backstreet Boys," he answered. "It's Lou's concept; we had to dance a certain way, look a certain way. I really credit him for that, because that's what's selling so much: It's a package, big time."

By Lou, Stone meant Lou Pearlman, the Orlando, Fla., impresario who has built a $950 million music empire inventing a new generation of boy bands. Acts like the Backstreet Boys, N'Sync and LFO have together sold more than 70 million records, mostly to young girls with disposable allowance money.

"I thought it was all really great," Stone said, "but I thought, Gosh, do I want to be in this boy band and get branded and run the risk of not being able to break out of that?

"I just thought, I'm a writer, I'm a musician, I play all these instruments. And this is really a great opportunity and life is really comfortable and great right now, but is this how I want to see my life? Do I just want to take a free ride and kind of forgo my vision of, you know, being a musician and really doing what I want to do? And I thought, I just can't do that. They've done incredibly, and I respect them, and I think very highly for them. But for myself, it would have been selling out."

Phoenix Stone is not the first star to eschew cheap celebrity in order to maintain a sense of integrity. What makes him an interesting study in personal conviction, though, is where, and when, he decided to make his stand.

After all, it's not as if the classically trained musician opted out of the vulgar world of mass entertainment for a career in opera. Stone remained a practicing pop singer, sticking to his artistic vision within a genre that is not widely seen as having particular artistic merit.

Which is not to say that Stone himself is not an artist, or that his album lacks merit. "Phoenix Stone" is a solid debut. Sure, most of the lyrics are jejune, and all, predictably, are about relationships and romance and the like. But Stone is able to conjure up a certain soulfulness on lines like these:

And to guarantee mainstream appeal, those words are joined to the type of catchy hooks that have made people like Pearlman very, very rich. The best tracks are those on which Stone stretches his impressive vocals; "Nothing Good About Goodbye," the song quoted above, is one standout, as are "Never Fall in Love Again" and "She's Not You." And though those songs represent standard pop fare, Stone does step out of character to employ his musical training in others: On "Forever Friend," he skips the synthesizer and instead plays a simple piano melody, pulling off a stripped-down acoustic ballad that most teen-centric acts couldn't.

But if songs like that do win Stone widespread popularity, it's not as if fans will give him extra credit for sticking to his principles. This is an era, after all, in which the sellout, if not exactly celebrated, is at least seen as the source of tawdry entertainment. Puffy pop stars are the perfect sirens for the times; they aren't thought of as particularly hardworking, and few of us can believe that they take themselves seriously.

In the recession-fueled grunge craze of the early '90s, we made chart toppers out of well-worn garage bands and then, after they'd become famous, preferred that they still dress their past. The same expectations don't apply to bubble-gummers: It's better that they seem to have burst suddenly, glamorously, onto the scene, selling a few million copies of their debut -- on which even adults will find a tune or two irresistible, not that any will admit to being a fan.

"There's been a lot of -- how do I say this in a nice way -- a lot of flash-in-the-pan kind of artists, who are there because they're kinda made, you know, because they're good-looking, or whatever," says Stone, who, not yet a full-fledged teen idol, can make comments like that without being ironic.

"They're kind of out there because someone says, Hey, you're going to be a singer now. And you know, there's a place for that, and I understand that. But artists like that don't inspire me."

Stone, you see, aspires to a different sort of renown. "But then you always have the people like Elton John or Billy Joel or Stevie Wonder or George Michael," he continues, "and their music is them. That's where I am. I produced all the songs on my album. I played all the instruments."

Stone says he also admires the Beatles, which brings up the name of Pete Best. Does he see parallels between himself and Best, the drummer whom the other members of the not-yet-Fab Four fired, and then replaced with Ringo Starr, just before the group recorded its first hit single, "Love Me Do," in 1962?

"I don't know if you really can compare the Beatles with someone like the Backstreet Boys," answers Stone, and for a vertiginous moment, I wonder if he misinterpreted my question.

"The Backstreet Boys are more New Kids on the Block than the Beatles," he continues, to my relief. "I've never really even wanted to talk about the Backstreet Boy thing, because I didn't want to come across like I was trying to get any press from my connection to them. Yeah, I could've been a Backstreet Boy, running around and doing their thing. But then, would I have had time to become the musician I am?"

I now realize that Stone understood what I was asking; while he can see the comparison to the onetime Beatle, he prefers to focus on the distinction: Pete Best got canned. Phoenix Stone quit.

Though Stone hasn't yet enjoyed his big moment, there is evidence that his reputation is growing. The night before our interview, he was noticed -- even though disguised in a baseball cap! -- while eating dinner at Carmine's, a popular theater-district restaurant.

This summer, during a concert in Atlanta, the audience started singing along with some of his songs. And earlier this year, he found himself at the Grammys, where he met Lionel Richie, which was "like a highlight" for him, because he got to tell Richie, "I learned to play piano playing your songs." So there have been those types of experiences lately, "which is cool." Those and, oh yeah, the ones involving his legions of adoring, mostly teenage and female, fans.

"One time -- it's not really funny -- but I was doing an autograph signing," Stone tells me, chuckling. "And this girl is waiting there, and she comes up, and I sign something for her. And I'm talking to her, and all of a sudden she runs off. The girls behind look down, and they're like, 'Eeeewwwee.'

"I didn't want to make her do that. I felt so bad, because I knew she was embarrassed."

So there's that, too: No matter how many copies his album sells, Stone can say that he has made a fan wet herself.

Which has got to count for something.

But Stone makes it clear that what really thrills him is the approval of other musicians, and that that is what has buoyed him most as he has waited for his time in the spotlight. "Art Garfunkel got hold of an advance copy of my album, and he was like, 'I want to record some songs with whoever wrote this,'" Stone says. "That was very cool."

Recording with Garfunkel would mean that Stone had earned his artistic bona fides -- a distinction he deeply craves. It might also mean that Stone, who seems to have the perfect looks for the pop-star part, might also achieve his biggest success behind the scenes.

How very un-Backstreet that would be. But could becoming the next hip producer, the next Babyface, possibly wipe out all misgivings about the choice he made? Stone insists that I'm missing the point.

"That doesn't enter my mind. To me, success isn't necessarily ruling the world. It's more writing something that I'm proud of and that people enjoy," he says. "I don't look back. You can't look back.

"This sounds odd, but I have no regrets. I'm so determined in what I want to do that I can be happy for them, and be, like, 'Gosh, you guys are amazing.'

"And at the same time, I know exactly where I'm going."

James Burnett is a staff writer for George magazine.