I am walking through life with the elephant obsessed. 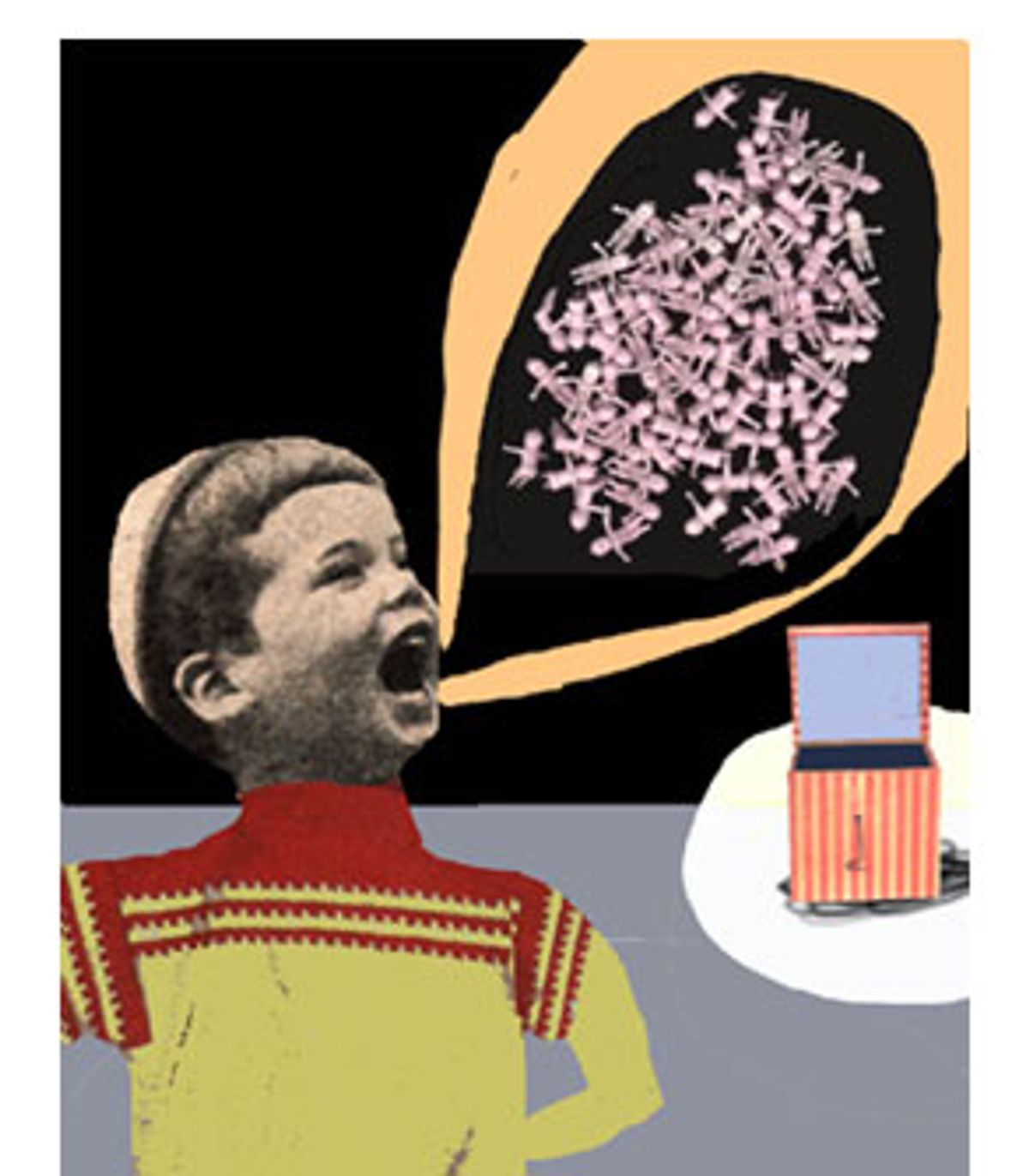 Children are, by any reasonable adult standard, mentally ill.

I am not a health professional and I avoided psychology courses in college, not wishing to discover that my quirky charm was, in fact, a disease. But even I can recognize obsessive-compulsive disorder when it's articulated as symphonically as it has been in both my children.

Max, 3, is the current nut case. His elephant obsession has been going on a year now, its genesis having sprung from his first viewing of "The Jungle Book." (It had to be Disney, didn't it?)

It's only when you walk through life with the elephant obsessed that you realize what a pervasive presence pachyderms have in our society. Max and I will be strolling down the cereal aisle at our local grocery store, having a lovely, low-key time, when he will spy an elephant occupying a tiny spot on the back of a box. He points and then screams in a voice loud enough to move furniture, "Elephant!!!" After I restart my heart, we saunter over to the box in question and admire the elephantine image, and Max utters his signature line: "How did they know I like elephants?"

On those rare occasions when we don't see elephants, we are elephants. "Put up your trunk, Daddy," he says, and the pachyderm parade is on. The trouble is that, with arms extended in trunk simulation and legs marching ` la Colonel Harthi of "The Jungle Book," we look a lot more like Nazi storm troopers than cuddly, animated jungle dwellers. "We're not Nazis, we're elephants," I explain to horrified mothers on the playground, who manage nervous smiles, then burn rubber in the opposite direction.

In some cases, childhood obsessions simplify parents' lives. For example, when Max and I go to the zoo, the only decision to be made is whether to watch the outside elephants or the inside elephants. I kind of miss the sea lions, but I'll get over it. It also makes gift giving a no-brainer. We've got elephant books, elephant stickers, elephant videos, stuffed elephants, plastic elephant trunks, even elephant garlic. We're hoping to avoid elephantiasis.

Alison, now 6, doesn't really have an obsession of clinical dimensions at present, although the American Girl doll thing does have its moments. But I recall with a shudder her Princess Period. From about age 2 until she turned 4, she wore nothing but dresses. Not once during those 18 months did shorts or pants drape her bug-bite-scarred legs. Her orthodoxy was almost admirable, but mostly a pain in the ass. Still, it's not like she was prissy -- she still ran with the boys, got as dirty as a ditch digger and maintained her take-no-prisoners approach to life. She just did it in party shoes.

The worst part of the Princess Period was the reading list. "Snow White," "Sleeping Beauty," "Beauty and the Beast," "Cinderella," "Anastasia" -- it was like Gloria Steinem goes to library hell. The messages of these books, with rare exception, were deadly: Be passive, cower, suffer abuse with a smile, and eventually a prince will come along and rescue you, even if you're essentially dead, as was the case with Sleeping Beauty.

These princes are something too. They have the power to hack through 100-year-old forests with a single sword, even return life to the lifeless, but they're stupid enough to fall in love with and marry women they've known for 10 minutes. Fortunately, either the deprogramming we did at the end of each reading worked, or the stuff was so vapid that it never penetrated her psyche. And just when I thought I'd rather eat a poison apple than read one more happily ever after, she cycled out of it.

In relative terms, the Elephant Era and the Princess Period have been mild. We have friends whose son became obsessed with "The Lion King" to the point that he would carry the empty CD case around wherever he went. He even slept with it, and to this day he is convinced that New York consists of a single street -- Broadway.

The "Lion King" guy's older brother has enjoyed a long-standing lust for all things having to do with public transportation. When his father travels for work, all Alex asks him to bring back are maps of rapid transit systems. Once during a play date, Alex's and Alison's obsessions clashed. After a frustrating few minutes of romance-free train play, Alison said, "Is there any love on this train?"

But contrary to the assertion at the beginning of this essay, I have moments when I believe that childhood obsessions are, in fact, valuable coping mechanisms and signs of solid mental health. When it finally dawns upon kids how small they are and how big the world is, they need something consistent and simple to counter the no-corners nature of the new world they inhabit. Parents are reasonably useful in this regard, but we can't compete with stories where the ending is always happy, the trains always go in the same direction and the animals are unfailingly loyal and strong.

I look at it this way: It's good to know what you like in life. Lots of people never get there. And now I even have a goal for Max's jungle giant jones. One of the elephants at our local zoo is pregnant, so if he can hang in there for the 18-month gestation period, he'll get the mother of all baby elephants just a 15-minute drive away. That's the Max equivalent of seeing Ed McMahon walking up the front steps. Fortunately for me, he knows how to share.