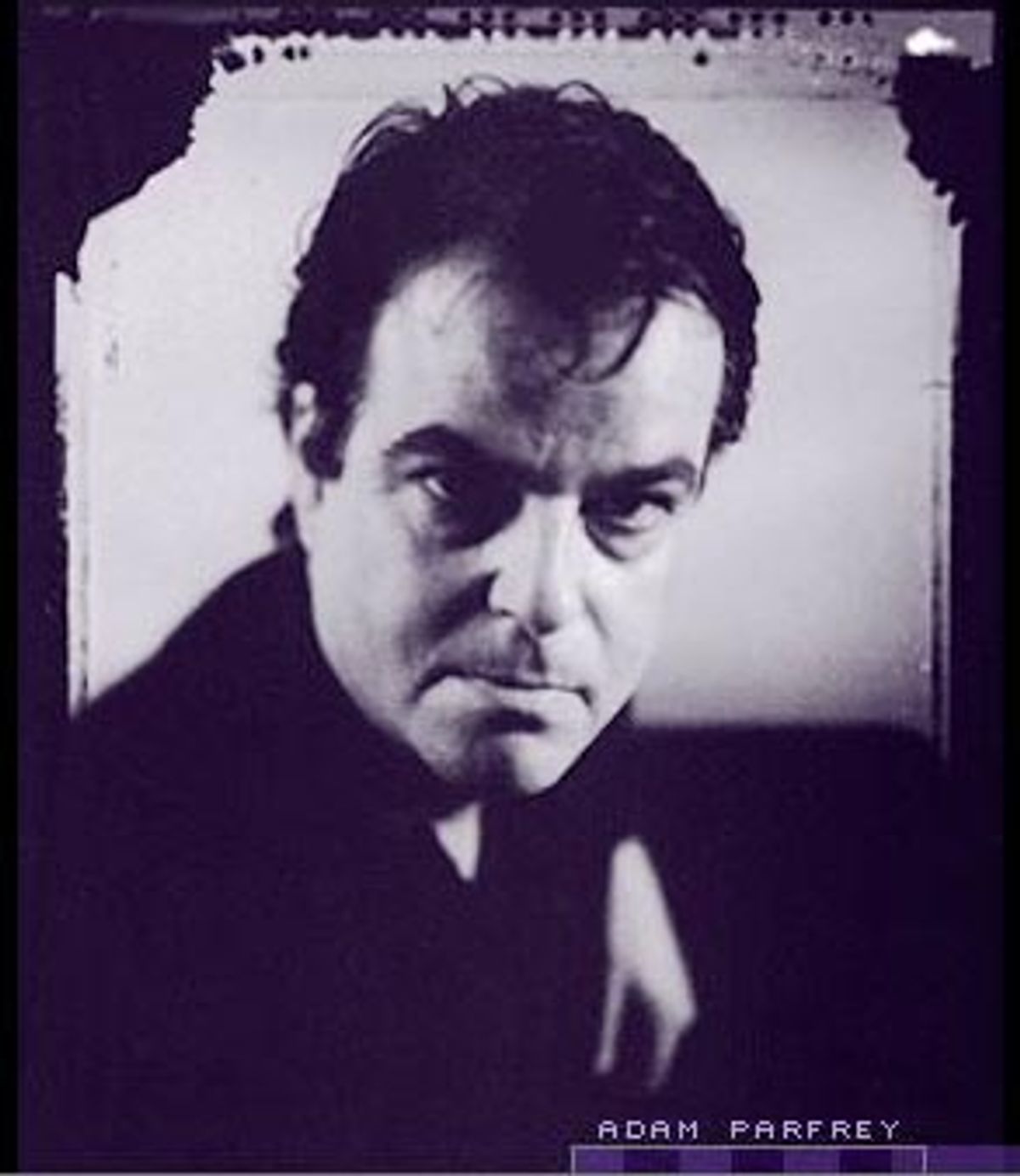 Plump, suave and swathed in black, Adam Parfrey stands before me flipping through a gruesome stack of color photos depicting headless torsos, severed limbs and various bodies sliced and diced like mincemeat. Could be a Jeffrey Dahmer wet dream or the Hannibal Lecter cookbook -- take your pick. Suddenly, a small frown appears on Parfrey's face.

"I don't like the way this red looks here," he tuts. "Oh, here's an article we translated from Spanish titled 'Hacking Mom.' Seems the man attacked his mom with a machete. Macheteo a su madre."

We're standing in the detritus-strewn offices of Feral House, Parfrey's 11-year-old alternative press, and Parfrey's proudly showing off the galley of his next big effort -- a sort of Mexican "Faces of Death" coffee-table-style book due out in November titled "Muerte!: Death in Popular Mexican Culture."

According to Parfrey, the bloody glossies have been culled from "Alarma," a Spanish-language tabloid with a circulation of about 15 million in Mexico. You can buy "Alarma" at a Spanish newsstand near you. Just don't tell Joe Lieberman.

But I'm here to discuss a different Feral House book: "Apocalypse Culture II," Parfrey's just-published compendium of every manner of freakdom your little perverted heart could wish for: necrophilia, pedophilia, cannibalism, Satanism, Jews for Hitler, coprophilia and so much more.

"Some of this stuff's even hard for me to take," quips Parfrey, 43. "Now that's saying something."

You ain't kidding. Parfrey's first "Apocalypse Culture," published in 1987 with Amok Press (which he co-owned at the time), was a prescient anticipation of millennial times, focusing on many subjects soon to become dear to the hearts of Gen Xers and assorted underground types: body play, occultism, secret societies, Armageddon, man-as-machine, the writings of Hakim Bey, etc.

J.G. Ballard called it "compulsory reading," and referred to the anthology as "an extraordinary collection unlike anything I have ever encountered." The tome was adopted by freaks everywhere as their bible -- selling over 55,000 copies; Parfrey earned a place in the subversive pantheon right alongside his dead buddy Anton Szandor LaVey, "The Black Pope" of the Church of Satan, whose books are the pride of the Feral House backlist.

Now Parfrey's published the long awaited sequel to "ACI," arguing that apocalyptic thought is still with us, and more a state of mind than anything else.

"Apocalypse culture is the manifestation of far-gone apocalyptic thought," explains Parfrey, shifting gears and taking a seat behind his ratty old desk. "It's an end time situation. People do not feel or act as if there's a future. We're on the downward slope of Western civilization, for good or bad. It's almost Spenglerian. Total democracy seems to have won. But it's really some sort of masturbatory shake-off."

"Of course, I'm not sure I want a more civilized society," he adds. "Western civilization is tottering, and I'm just giving it a quick kick to help it tumble faster."

If I read Parfrey correctly, the point seems to be that as there are no longer any grand systems of thought dominating Western intellectuals, cerebral anarchy and short attention spans rule the day. Folks get mired in obsessional cul-de-sacs, which lead them nowhere. In this environment, the intellectual with the greatest freak show wins. Think of Parfrey as equal parts P.T. Barnum, Rod Serling and Hegel. The man can't be beat when it comes to collecting outré oddities.

Wasn't Parfrey concerned that the triumph of the swill, a triumph he foresaw, would make "Apocalypse Culture II" obsolete? The Internet itself seems a limitless reservoir of "apocalyptic thought," as defined by Parfrey. What's left that people haven't already encountered in some form?

"I was concerned about that," he admits. "But it turned out not to be a problem. New times come around and there are new problems. People are not centered. It's not like just because you show this new manifestation of weirdness and end beliefs that they won't come up in a new guise in 10 years. There's always a new guise. I'm not too impressed with the idea that everything's on the Internet. It's one thing to have a couple of creep-heads talk about something in a discussion group. It's another thing when you're talking about mainstream morality."

"ACII" bears out Parfrey's apocalyptic musings. The more lively pieces include a fable penned by Ted Kaczynski; the strange tale of the Japanese cannibal and celebrity Issei Sagawa, who dined on the flayed buttocks of a young Dutch girl in France; a hilarious essay by Crispin Glover in which he discusses the boon to mankind if Steven Spielberg were to be erased from existence; the Aryan Nations' official literary analysis of the Don McLean song "American Pie" and a detailed examination of a female necrophiliac's sexual practices.

If corpse-screwing is not enough to make you retch, there are other articles guaranteed to get your flesh crawling. Among these: a collection of "recipes" for cooking human babies, such as "Stillborn Stew" and "Oven-Baked Baby Back Ribs"; a piece by zine pioneer and convict Jim Goad describing the assault on his girlfriend that landed him in the pokey; and a series of articles and paintings examining society's preoccupation with pedophilia, including a truly sick piece by writer Peter Sotos in which he relates his sexual fantasies concerning JonBenet Ramsey.

"Sotos is a well-published author, and he's venerated by people like Dennis Cooper. The reason he's in the new book is not so he can get off on his fetishistic, violent, misogynistic, misanthropic pornography. But I found it fascinating for a true pervert like Sotos to make the case for the absolute perversity of the media itself. He has a major collection of JonBenet Ramsey stuff and drew from that. A pervert knows a pervert best," Parfrey says.

"Pedophilia's a major contemporary taboo, a hypocritical taboo," responds Parfrey. "It's a hysteria about children and taking care of kids. The way I see it is some weird backlash against something everyone's talking about and making money off of by promoting in the mass media -- a sort of return of the repressed. They say, 'Oh, this is a bad thing.' But they're selling this bad thing. They're selling JonBenet Ramsey every minute of the day. This is a catering to perversion, obviously, that many millions of people are succored by. Artists or mothers taking photos of their children in a bathtub have become the pornographers. But the real pornographers to me are Geraldo Rivera and Globe magazine."

Parfrey had a good deal of trouble finding a printer to print "ACII" because of all the racy illustrations of little girls. Finally, one agreed to take the work if six of the images were blacked-out in key areas. But if you look closely enough you can see the outline of what's going on beneath some of those black rectangles. And Parfrey has posted all six works by artists Blalla Hallmann, Stu Mead and Beth Love on the Feral House Web site.

"To me, they're not pornography," Parfrey says. "They're innocent practically -- very innocuous works. I'm not for child pornography. I think it's a crime. But I do not believe that an idea in an artist's head is pornography or should be considered so. The whole censorship thing sort of proved the point we were making."

Strangely, it's not the articles on pedophilia that have garnered the most ire so far. Rather, an obscure advertisement Parfrey found on a lamppost in Berkeley, Calif., promoting a Web site called clonejesus.com has earned Parfrey a number of death threats from pissed-off Christians. The ad explains that relics of Jesus' blood and body (including, it says, the Messiah's foreskin) are preserved in churches throughout the world. Clonejesus.com is soliciting funds to extract the DNA from those relics and artificially inseminate a young woman, thereby instigating the Second Coming.

"So many observant Christians are just losing it now," he says. "Many have e-mailed me and threatened my life. I don't know why, but it really pushes their buttons in a bad way."

Parfrey's had a number of successes as a publisher, aside from the cultural phenomenon of the first "Apocalypse Culture." Rudolph Grey's "Nightmare of Ecstacy" inspired the Tim Burton film "Ed Wood." Other Feral House products such as "Lords of Chaos," a guide to the black metal underground, "Sex and Rockets," a biography of occultist and Jet Propulsion Laboratory founder Jack Parsons, and "Pills-a-go-go," an exploration of America's obsession with pharmacology, have all sold well and won plaudits from critics. In fact, the film rights to "Sex and Rockets" were recently optioned by Don Murphy of Angry Films/Sony, the producer of "Permanent Midnight" and "Natural Born Killers." If the film's made, it could be Feral House's next "Ed Wood."

The flip side? According to Parfrey, Feral House barely breaks even each year, and the literary grand pooh-bahs at the New York Times Book Review and elsewhere generally hold their noses and ignore him.

"In that precious little book world, the likes of me are not welcome," Parfrey smiles. "I'm not Saul Bellow or Phillip Roth. No Feral House book has ever been reviewed in the New York Times. We've put out 50 books. One's been made into a movie, and several others have created cultural trends. But for some reason it's more important to review yet another book about Virginia Woolf than a Feral House book."

And then there's been the occasional lawsuit. One by ex-FBI official Oliver "Buck" Revell against the Feral House book "The Oklahoma City Bombing and the Politics of Terror," by David Hoffman caught Parfrey with his pants down and no legal insurance. Faced with possible bankruptcy, Parfrey had to eat crow in December and apologize to Revell "for any and all misstatements." Even though the allegations that Revell had advance knowledge of the 1988 Pan Am Flight 103 bombing were only a small part of the 600-page book, Parfrey agreed to destroy all remaining copies to placate Revell.

But Parfrey now has legal insurance and says he'll fight all such lawsuits in the future. (He believes he would have won the Revell suit had he been financially capable of going to court.) As for the death threats and the condescension by the literary establishment, to some degree that's all part of the game.

"I became a publisher because people didn't see it the way I did in terms of what I found interesting," he says. "If other people weren't going to publish what I found intriguing, then I had to do it. I couldn't really work for other people. Like, 'Hey, I'll find another "Chicken Soup" book for ya!' I couldn't see myself doing that. No way."