Why are the Rainforest Action Network and other nonprofits running ads in the New York Times telling us that the Internet isn't "empowering" and computers in the schools are bad for kids? 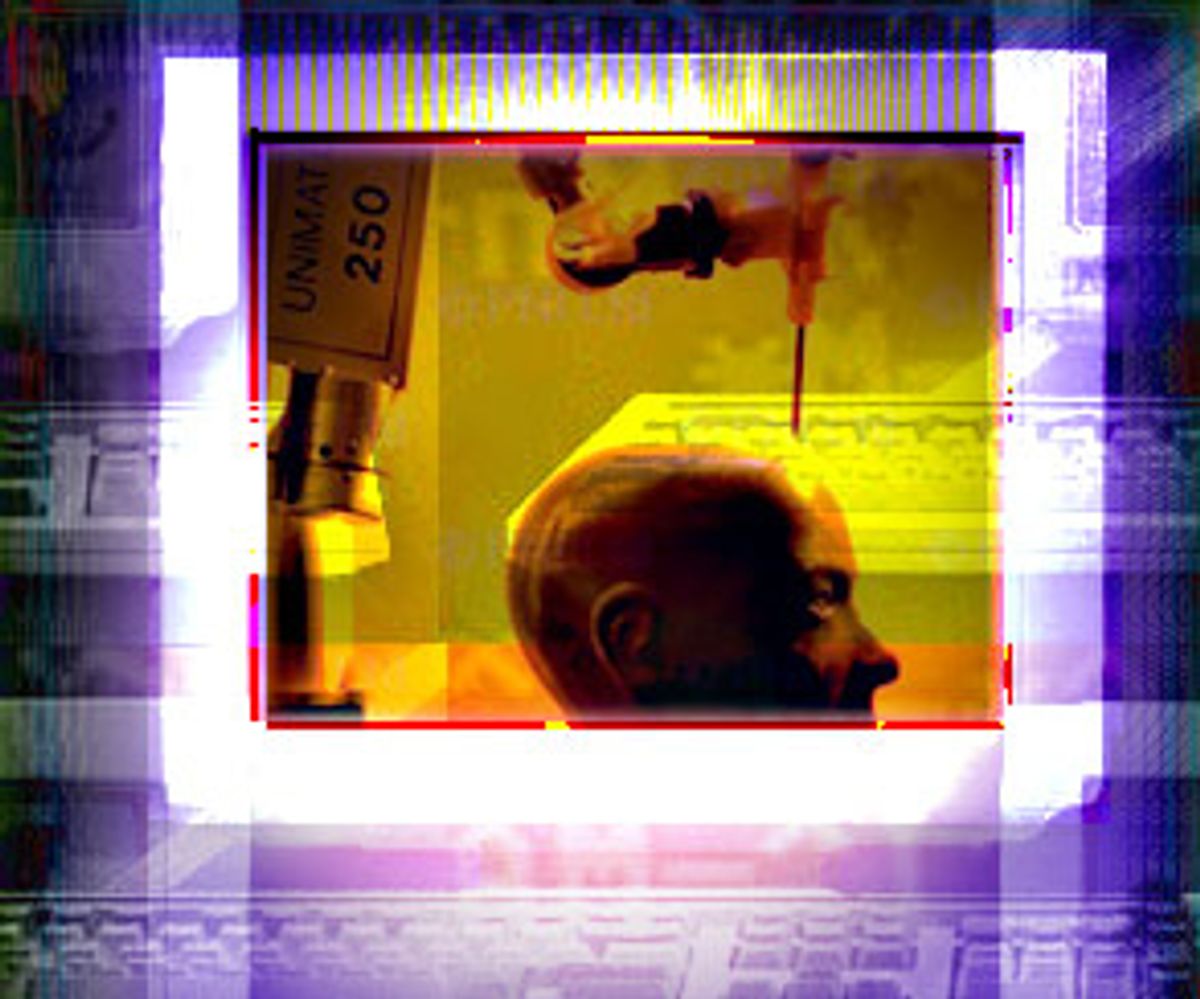 "E-Commerce & the Demise of Community"
"The Internet and the Illusion of Empowerment"
"If Computers in Schools Are the Answer, Are We Asking the Right Question?"

These are just some of the technology-debunking headlines that have run in the past few months in the New York Times. But despite the paper's reputation for occasionally lapsing into technoid heebie-jeebies, this batch of alarmist exclamations can't be pinned on the Times itself. The headlines belong to paid advocacy advertisements -- labeled as such -- placed by a loose coalition of about 80 nonprofits calling itself the Turning Point Project.

The goal of the Turning Point Project, say its organizers, is to open a debate about the culture's "technomania." From e-commerce to computers in the schools to virtual community -- these dystopic doomsayers find something to lament about virtually every aspect of contemporary technoculture. The picture they paint of the future is even grimmer: self-generating robots leading us to a "post-biological" future, a society in which a genetically enhanced "GenRich" elite rules. Are you ready for "designer babies"? How about a pet that's a "chimera" -- half-human and half-animal? (Actually, that one sounds kind of cool.)

"In the marketplace of ideas, our contribution is to get these ideas out there, debated and thought over, as opposed to the ideas that are simply disguised propaganda for certain economic interests," says Herb Chao Gunther, president of the Public Media Center, a nonprofit ad agency that helped the groups put together the ads.

It would be all too easy to casually dismiss the sometimes screechy screeds as just so much lefty Luddite-ism run amok. The very broaching of such questions as who controls new technologies, and to what end, is bound to raise the hackles of some technologists, particularly those predisposed to bridle against any government or Joe Public interference with their work.

As libertarian activist and open-source software evangelist Eric Raymond says in response to the ad campaign, "This is pretty much the standard anti-technology, anti-markets, anti-individual-freedom ranting by the usual suspects -- the spoiled rich children of all ages, confident that they and only they know the right way to live and that all change not under their political control is bad. They're no good at inventing things and no good at creating wealth -- but, boy, are they full of convictions about how the rest of us ought to live and what technologies ought to be 'allowed.'"

Despite Raymond-like ire, there's still no getting around the reality that the ad campaign is raising questions that are rarely heard in current news coverage of technology. And as politicians continue to slobber over Silicon Valley dollars, don't look to them to take a strong stand on the potential negative consequences of technological progress. Consider, for a moment, both Al Gore's and George W. Bush's blue-sky pronouncements about technology. The prospect of either candidate becoming president doesn't inspire any confidence at all that the next administration might warm to the role of technology watchdog.

In the absence of any government supervision, then, the Turning Point Project wants to sound the alarm.

The five "technomania" ads are just one part of a $1 million campaign waged over the last year by the group, lambasting everything from genetic engineering to economic globalization to so-called industrial agriculture. And if you can ignore the hectoring tone of the campaign, some of the ads succeed in being thought provoking.

"The Internet and the Illusion of Empowerment" attacks the sacred cow that holds that the Net is an empowering force of freedom -- a disseminator of grass-roots power to the people. "Everyone should think different together," quips the copy, suggesting that huge conglomerates rushing toward globalization are more likely to benefit from "global computer networks" than individuals.

New technologies often have downsides. As one ad notes, when the automobile was introduced it was hyped as "clean, safe, convenient, private, fast, nonpolluting [unlike horses]." There was "no mention of pavement covering the landscape, air pollution, noise, deaths on the highway or oil wars."

"Technology should be assumed guilty until proven innocent," declares Jerry Mander, the author of a large portion of the advertising copy. Mander is the president of the International Forum on Globalization and a senior fellow at the Public Media Center. He's also the author of a well-known critique of TV: "Four Arguments for the Elimination of Television."

Mander's argument is blunt: "Corporations are completely free rein on these matters. They can go ahead and do things until a bunch of people are dead or until something explodes. There's really no process by which society makes judgments on these things."

That wasn't always the case, says Mander, who notes that there used to be a small agency, the Office of Technology Assessment, that reported to Congress on its evaluation of the social, political and environmental consequences of any new technology. But it no longer exists, a victim of congressional cost cutting in the mid-'90s. Now it's up to the nonprofit sector to shoulder the load, in this case, theInternational Center for Technology Assessment, one of the contributors to the Turning Point Project.

One of the main weaknesses of the campaign, note some observers, is that its stress on worst-case scenarios is just as suspect as the best-case benefits touted by corporations. Whom does it serve to compare computer companies proffering computers to schools to drug dealers hooking budding junkies with free drugs? In their quest to "open the debate," the ads often fall into such bold banner-waving declarations as "We are in the midst of a technological stampede. We are in technological freefall. We are observing one of the greatest big business boondoggles in our history."

It's just such grandstanding that makes Todd Lappin, the content director at Guru.com, formerly an editor for Wired magazine, react to the ads with a "huge groan" -- a reaction that probably echoes throughout the hallways and cubicles of Silicon Valley. "On the one hand those kind of perspectives need to be represented," says Lappin, "but on the other hand they come off as completely reactionary. The arguments aren't particularly new, nor are they particularly creative."

Lappin also disputes one of the critiques offered by the Turning Point Project -- the claim that news about what's happening in technology is dominated by the views of those who create it and stand to make money off it. The ad titled "Techno-Utopianism" states the thesis most directly: "Descriptions of new technologies are invariably optimistic, even utopian. That's because most technology news originates from corporations who profit from it."

But Lappin doesn't buy the categorization of the computer industry as full of tech worshipers duping an uncritical press. "Take wiring the schools, for example," he says. "Yes, there have been a lot of Silicon Valley technologists who have been pretty active in promoting it, but I don't think anyone, including those Silicon Valley technologists, think this is a cure-all for the schools. The subject has been covered to death."

Genetically modified foodstuffs and artificially intelligent robots are a couple of other technology topics that do receive a fair amount of press questioning. But it is still hard to deny that the bulk of business technology coverage is rah-rah: Technology creates jobs, makes millionaires, drives the economy forward into the future! And in that context, anything the Turning Point Project can do to spur contrarian viewpoints can't hurt.

So what effect is all the publicity having? Organizers of the Turning Point Project are already claiming victory in the tens of thousands of calls, e-mails and letters they say they've received about the campaign. In their view, the stranglehold that technoboosters have over the debate on technology's pros and cons has been loosened. The Public Media Center's Gunther says that too often technology "takes on a life of its own, and it all feels inevitable ... The most important decisions that we have to make as a society about the most profound things that are just ahead of us are happening without open debate, without our knowledge, without our even being aware of the implications."

A good point. But the question then becomes one of tactics. There are plenty of technologists who do display nuanced views of what technology can or should do. But one wonders if they might be alienated by the uncompromising stance of the Turning Point Project -- for whom every pro-technology booster is just another corporate lackey/Dr. Frankenstein.