Gore Vidal delivers the final volume of the American Chronicle series, his sweeping, score-settling fictional history of the United States. 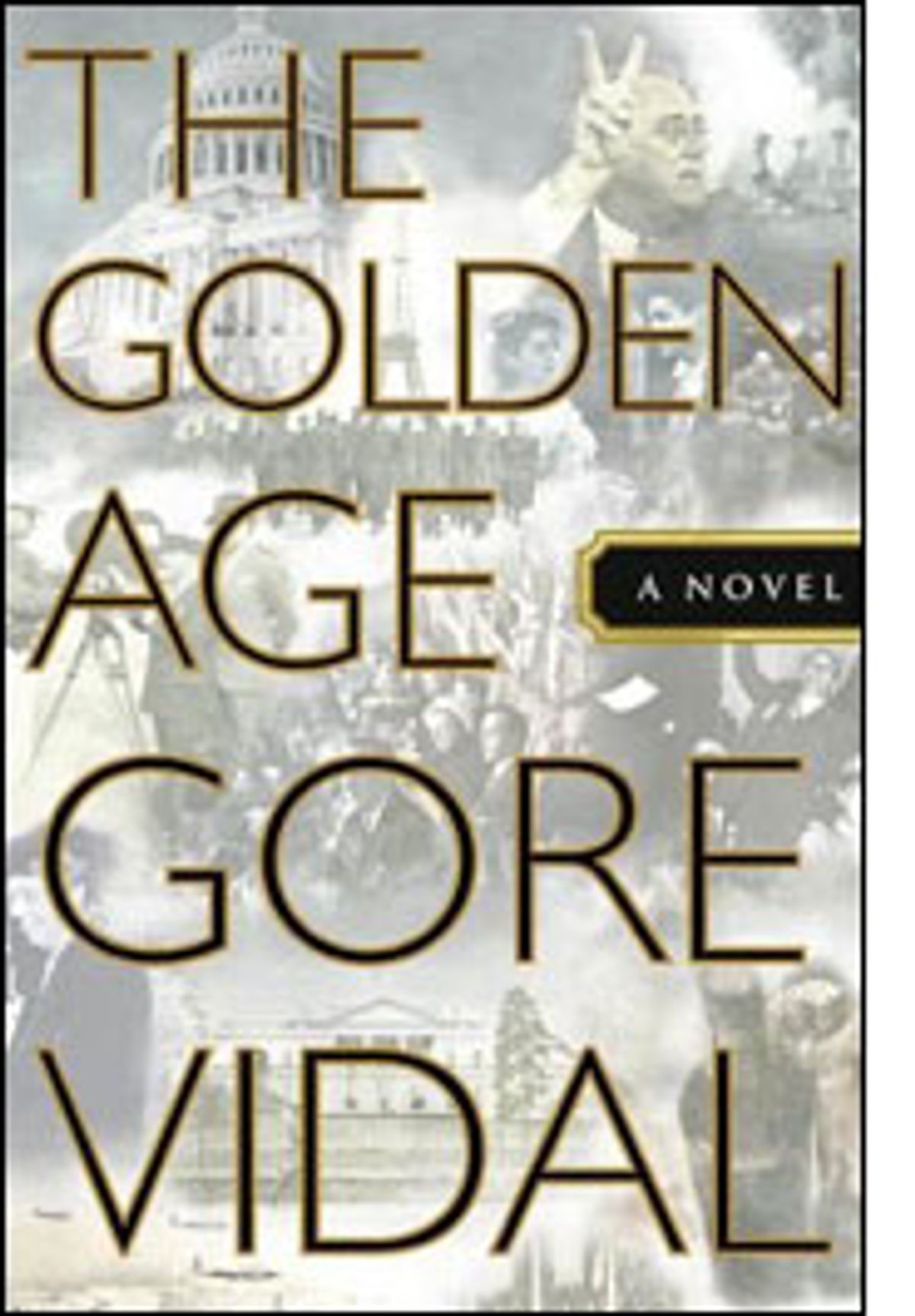 Gore Vidal is the Paradoxical Man: He is a prophet without honor in his own country, yet he is also a national treasure. He is a born patrician, yet he is also a democrat to the marrow -- which keeps him just outside the patriciate, as a class traitor. He is a moral libertine, a radical traditionalist and a cynical idealist.

He's also our most gifted essayist but, loath as I am to say this, such is my esteem for him, he is not quite our most gifted novelist. Still, his peerless prose alone is enough to recommend "The Golden Age" the concluding volume in his American Chronicle series. It's typical Vidal: very witty, very smart, never boring -- what a swell party this is! And yet I wonder whether Vidal hasn't invested too much in these tomes, which, for my greenbacks, don't bear up as well as his "entertainments" like "Myra Breckenridge" or "Duluth." For, as the Roman poet said, "What forbids us to tell the truth, laughing?"

History, with a capital H or simply as gossip, is a perfectly legitimate basis for a novel, despite Mary McCarthy's contention that "serious" (i.e., solemn) writers don't do history. There is a vast difference in style and substance between a lard-butt production like William Safire's "Lincoln" and Vidal's. In his Chronicle books, Vidal has revealed the secret history of these here United States, parrying, with gleeful malice, the standard-issue pap still peddled in schools. (Consider Vidal's canon a countercurriculum.) It's been Vidal's fate to stumble across the harsh truth that our government, "of the rich, by the rich and for the rich" was always ever thus, and, in the spirit of the Manifest Destiny, is compelled to impose a Pax Americana on the rest of the planet. Vidal deserves our thanks; he's tendered the reading public, at home and abroad, an invaluable service; speaking truth to power has never been a good career move, regardless of one's social standing.

"The Golden Age" is a pert rewrite of "Washington, D.C." the first American Chronicle novel. The time, 1939-52, encompasses the end of the Depression, the Second World War, the birth of the Bomb, the McCarthy era and the Korean War. The off-screen figures in "Washington, D.C." -- FDR, Eleanor, Harry Hopkins, Henry Wallace, Harry Truman and a cast of thousands -- are brought into focus to play their parts alongside the Sanford clan, Vidal's fictional dynasty, descended from Aaron Burr. The story arches along in melodramatic fashion, with noirish shadings: Can FDR steal a third term? Will the United States be lured into another European conflict? Can the U.S. provoke Japan into attacking it? Will FDR stand for a fourth term? Is his four-eyed, four-flushing successor, Harry S., up to the job? Will the little haberdasher sign the National Security Act? Will the Republic become an Empire? And the Sanfords -- will Caroline, the clan matriarch, ever be able to return to Saint-Cloud-le-Duc? Will her brother Blaise's wager on Clay Overbury, the Kennedy-like presidential aspirant, pay off? Can young Peter, Blaise's son, retain his integrity in a corrupt world? You'll be gripped to the edge of your Chesterfield.

For anyone already in on the dirt, who catches classical and literary allusions while sleeping, stretches of "The Golden Age" will seem like reels seen before. (Most readers enter in the middle, of course, so they love being filled in at every plot twist; hence Vidal's bestseller status.) You finish lines mentally beforehand; you know which name is going to be dropped, which back stabbed, which character assassinated; you know which pol can be bought and which hack is on the make. You also know there's going to be some score settling -- the other Truman, Capote, and the august Times, among other vile bodies, come in for a few digs -- and more than a little smug self-congratulation. (Vidal's irritating habit of being so cleverly cruel at the expense of some pompous prig or fool almost makes you feel sorry for the person.)

But then playing to the balcony is Vidal's weakness. His fictional creations can seem mere stand-ins for ideas or types; they don't come to life, unlike his brilliant pen portraits of Wendell Wilkie, Herbert Hoover, Harry Truman, Joe Alsop or Tennessee Williams. Aside from Peter, a Jamesian innocent who gradually becomes wise to the ways of the world and is sadder for it, you don't care what happens to them. Vidal's too detached, too Olympian.

But then the final chapter, titled "On Air" gives the lie to all the preceding. It is a grace note suffused with melancholy, wafting over, perhaps, from "Palimpsest" Vidal's masterpiece. It's set the day after the millennium, with Peter meeting up in Ravello, Italy, with his fellow St. Alban's classmate, Vidal himself, to look back on the American century. They're being filmed by a young Sanford relation, AB, who, in that footloose and fancy-free way, sums up the best and blithest traits of our youngish, bittersweet nation. Peter and Gore reflect on might-have-beens, dreams darned, the unknowable future; they commune with the dead. It's all rather amusing and touching, handled with the lightness and delicacy of Italo Calvino. Long live Gore Vidal.