Should one breast-feed on a blind date? 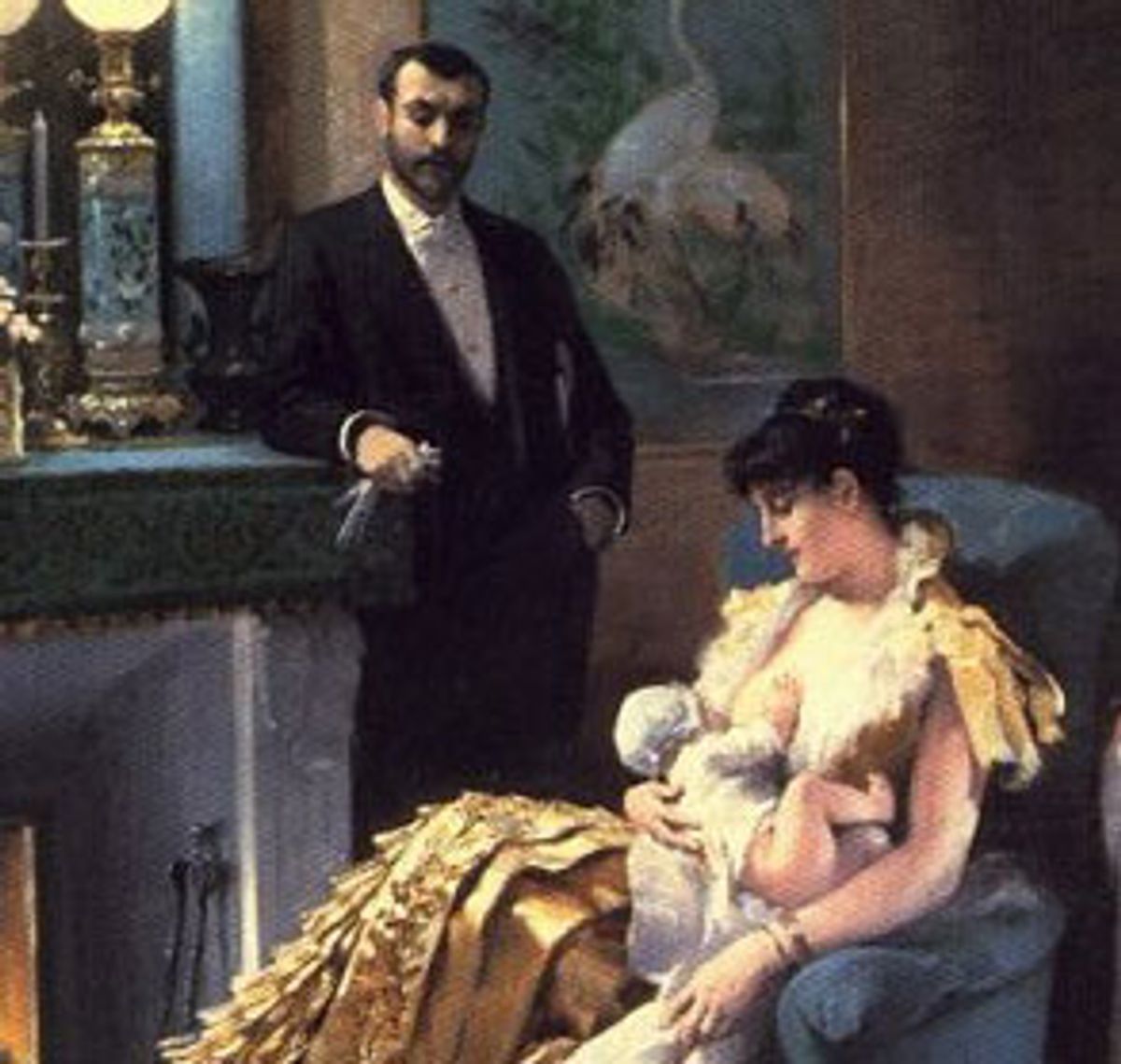 I went on a blind date the other night.

No big deal, right? I'd spent years dating. I'd been on scores of blind dates. I hated the process, its forced conversation and tense laughter, and I had thought I was finished when I moved to Cuba two years ago on a fellowship, fell in love with a Cuban man, got pregnant and got married. But then we moved back to the States and had the baby and our marriage fell apart. We recently separated, so friends and family now feel free to fix me up again.

So I went on a blind date.

This time, of course, my circumstances were different. First of all, if I wanted to make this an intimate twosome, I had to find and pay a babysitter to take care of my 7-month-old son. Or I could take him along. Wary of unwanted intimacy, I chose the latter option. That raised the question of breast-feeding. Should I bring a bottle of expressed milk, as my mother had suggested? I had never fed my son a bottle, and I doubted he'd take one from me at this point. So should I just casually whip out my breast while making getting-to-know-you conversation and let him -- my son, of course -- suck?

My mother, with whom I've been living since before the baby was born, urged me to ask my friends what they thought. I wasn't sure what insights my friends could offer, since none of them had been in this particular situation. But I polled a few of them anyway. My best friend thought I should go ahead and nurse at the table. The situation was already so strange, she argued, why not take it all the way and see how the guy reacts?

I had to search through my meager collection of post-maternity clothes to find something that both looked decent and wouldn't expose too much flesh while my son was nursing. I had to find something I'd feel relatively comfortable hitching up over my bare breast in the middle of a restaurant with a blind date watching.

As a rule I'm not squeamish about nursing in public or in front of family and friends. It took me a while to get used to breast-feeding in front of my father, and even after living and nursing in my parents' apartment, I sometimes still wait until he turns away to lift up my shirt and unfasten my nursing bra. A couple of times, when I was the only woman in a room filled with men, I've chosen to go elsewhere to feed my son. But otherwise, I feel fine nursing in front of people; if they disapprove, that's their problem.

At a recent conference for the institute that funded my Cuba fellowship, one of the trustees' wives, a young, demure Southerner barely out of college, spent most of her time huddled in various women's restrooms, surreptitiously nursing her baby. I, on the other hand, nursed my son whenever and wherever he got hungry.

This apparently wanton behavior didn't go completely unnoticed. One night, the institute's director, a man in his 70s, seemed taken aback when I turned down his offer of a second glass of wine. I explained to him that while I still occasionally drink one glass, I limit my intake because my nursing son takes in a dose of whatever I consume.

"You'd be a great date!" he barked, grinning lecherously. I wondered if my blind date would agree, as I yanked on my decidedly unsexy nursing bra and rushed to get dressed for my romantic outing.

My blind date turned out to be an ex-military man, blond and rugged. I tend to like dark, gangly intellectuals, so he wasn't exactly my type. But I had other things to think about, like strapping in my son's infant car seat and packing his stroller into the back of my date's SUV. This gave both my date and me something else to focus on during those awkward first moments, but it also put us through motions generally reserved for couples with a little one of their own. It was awkward, just different awkward.

My date suggested an intimate Japanese restaurant -- the kind of quiet, sophisticated spot where kids are neither seen nor heard. When we got there, he forged ahead in pursuit of a table as I bumped my son's stroller against the chairs of my fellow customers, each of whom turned to glare at the infidel who'd brought a potentially squalling baby into their midst.

On the phone, when I first mentioned bringing my son along, my date had assured me that he loved kids and was eager to have some. Tonight, he seemed intent on proving that kids loved him, too. After we settled into our cozily minute table, with the stroller wedged between me and the wall, he began to grin and cluck at my son.

My son, who usually smiles more than a car salesman, stared at him solemnly. My date made silly faces and animal noises. My son began to whimper. The harder my date tried, the more disgruntled my son grew. It was like watching a bad stand-up comic flop before a hostile audience.

I was relieved for both of them when, finally, the waitress brought our menus. While scanning it, I jiggled my son on my knee and shook his rattle to calm him. Nothing worked. His whimper turned into a cry. The couple at the next table glared at us and whispered what were clearly spiteful things. I stood up and, squeezing between tables, carried my son around the restaurant to distract him. His crying got louder. By now, the entire restaurant was scowling at us.

I began to realize that a nice, warm breast was the one thing that would placate my son. I pictured breast-feeding before a roomful of scowling eyes, across a tiny tabletop from a date I'd only just met. I pictured my son, ever curious, pulling away to check out what everyone else was looking at, leaving my bare breast hanging out for all to see.

As my date and I attempted to chat over the bitter sobs of my hungry infant, I hastily considered my options. I could excuse myself and go with my son to the ladies room, where I could huddle guiltily under fluorescent lights like the blushing trustee's young wife. Or, I could just go ahead and nurse the little guy at the table as if it were the most natural thing in the world. I decided to do just that.

My date, God bless him, kept his eyes trained on mine, a model of military restraint. Humor was his weapon of choice. "My uncle, who's always telling jokes, told me one about breast-feeding," he said. "Here's how it goes: There was this woman walking along the street with one breast showing. A guy passing by was surprised to see this, and he went up to her and said, 'Excuse me, lady. Why on earth is your breast hanging out like that?' The woman looked down, totally shocked, and said: 'Christ! I left my kid on the bus!'"

I laughed -- not so much at the joke as at this poor man's resourcefulness. We made it through the rest of the meal without further incident, but when my date dropped us off and said, "We should do this again sometime," it sounded more like "Hasta la vista, baby." And that's OK. I still don't think he's my type. Maybe I'm not even ready for dating yet.

I do, however, have this brave individual to thank for a solution to my next nursing-on-a-date dilemma. Next time, like any good public performer, I will open with a joke.

Paige Evans is on a two-year fellowship with the Institute of Current World Affairs. She lives in Florida.