Unappreciated at any speed

With their fast songs and enigmatic personalities, Alvin and the Chipmunks made it big -- until the suits at Universal Studios pulled the rug out from under them. Now they're fighting mad. 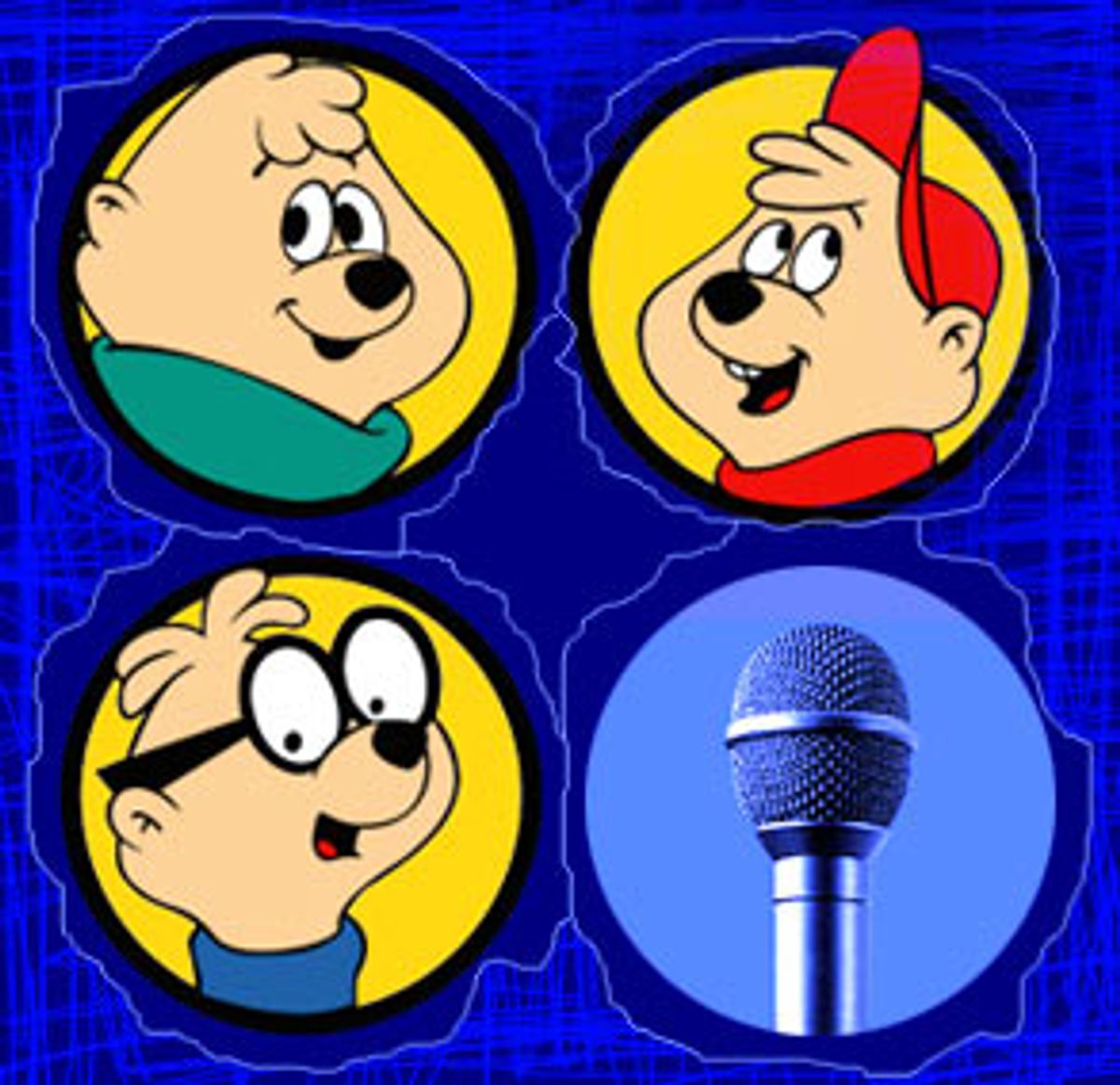 We agree to meet at Planet Hollywood. We take a seat by the window, and order beers -- except for Theodore, who prefers pudding.

I notice it immediately: The Chipmunks have changed. Alvin's youthful confidence has developed into something more ... Type A. His eyes, like those of an attack hound, seem to say "I suspect you." Still, his glibness is a relief from Simon's mannered abstractions. Only Theodore remains an enigma. Quietly shaping napkin animals, he speaks just once during the interview, to ask after Dave Seville, former adoptive parent and Chipmunk agent.

Yes. Where is Dave, indeed.

First off, I want you to know that I loved your cover of "Queen of Hearts." It was fast.

Simon: Thanks. We like to think of our songs as interpretations.

[An awkward silence follows. Simon closes his eyes, and appears to count backward from 10.]

Anyway, on Sept. 11, your creators at Bagdasarian Productions filed a $100 million lawsuit against Universal Studios for failing to adopt "the Chipmunks into the Universal family and [build] them a nurturing home in its motion picture, television, merchandising, video, theme parks and new media divisions."

Alvin, you're a straight shooter. What's all this about?

Alvin: Does Alvin smoke Silk Cuts? He does not. Does he smell of burritos? I doubt it.

I see how you might feel neglected, but I don't see how a fry cook in a Chipmunk suit is really going to hurt the bottom line.

Alvin: Let's go back to your homemade Chipmunk tapes. It's interesting: Many children have confessed to doing the same. I say "confess" -- we find it flattering.

Simon: Actually, we believe it bespeaks a need that's being systematically ignored by our representatives at Universal.

Interesting, Simon -- but much too complicated for our readers. Alvin, could you translate?

Alvin: Let's say I'm a child of above-average intelligence and creativity. If I can't get my hands on new Chipmunk music, I'm going to get to thinking: "Huh" -- and now I'm pretending to be the child -- "if I hold down these buttons on my parents' fancy cassette player, I can approximate the Chipmunk sound. If a new 'Alvin and the Chipmunks' CD were available to me, I would buy it. As it stands, I am going to destroy my parents' property, and potentially damage my fingers holding down these buttons."

Theodore: [Looking up from an origami swan] Where is Dave?

Theodore: When's he coming back?

Simon: He isn't. Eat your pudding.

Both of the examples you've given involve mistreatment. But could you tell me about a time when Universal made you a concrete promise and failed to deliver?

Simon: I shall. When we signed our contract, Universal agreed to manufacture 500,000 action figures, with movable appendages. After several months of runaround, it delivered 10,000 Plasticine pencil ornaments.

Alvin: No, the action figures with the hole in the butt.

Oh, I hate those.

Simon: Right. They cover the eraser. Bad, because when the lazy child makes a mistake, he is likely to opt for crossing out rather than erasing. Worse, the Plasticine is very heavy and can place undue stress on the child's wrist.

That's bad. But is it $100 million bad? I mean, is there anything Universal could do at this point to avoid a trial?

OK, but if we could turn back time, then what?

Simon: I'm afraid you're both missing the point. It's not about material things, it's about willful neglect.

Alvin: Universal is a brilliant company with many bright and talented employees. Make us a part of that. Open your arms to us, and nurture us beneath your wing. Simple things.

Alvin: Simon, it was wrong to throw you against the wall.

Simon: In a word, filial love.

And why do you think Universal failed to love you, Simon?

Simon: The Chipmunks presented a threat; Universal sought to eliminate us.

Right. But since it owns you, what does it have to gain by "hiding you from view," as you say in your suit?

Simon: All we can do is point to the facts.

And no one's questioning the facts. But let's look at this from another angle. Do you ever think you shot yourselves in the foot? I'm referring, of course, to the dresses.

Alvin: [Eyes ablaze, like those of a hound] The sneaker-length turtlenecks?

[Looking into Alvin's eyes is like looking into a vat of powerful acid, perhaps sulfuric.]

Alvin: They are not dresses.

Of course they aren't. But what about the Chipmunk fastness -- don't adults like their music ... slower?

Simon: Actually, our fan base is extremely diverse. We have a broad following among recent immigrants, and homosexual collectors of novelty objects.

Well, if that is so -- and I have no reason to doubt you -- then why the lawsuit? I mean, haven't you got enough? When is enough?

Simon: If it were just about the money, believe me, we'd all be relaxing somewhere warm. No, we forge ahead for one special reason.

You see, when you wake up cold and alone, with glitter on your face, and your hands are shaking and your mind's gone loose, and it's all you can do to get down a thimbleful of juice, you close your eyes and remind yourself who you're in this for -- who makes it all worthwhile.

Amie Barrodale is a writer living in Brooklyn, New York.