Playtime at the Games

Sex workers are flooding Sydney, where prostitution is legal and regulated. They're hoping to go home with some gold of their own. 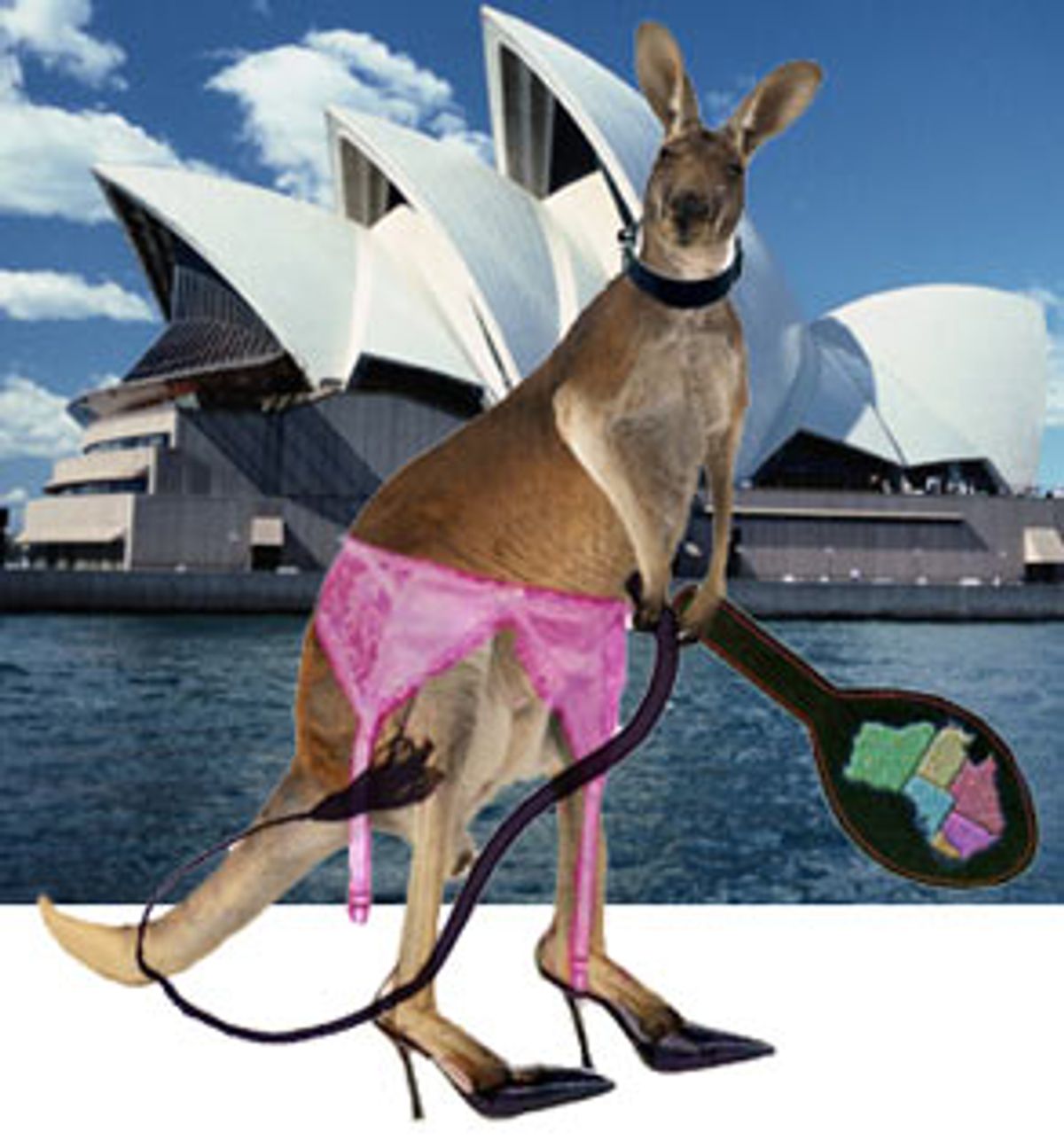 It's not just Olympic athletes and tourists who've flooded into Sydney, Australia, for the Games. Sex workers have taken their marks and are set to go.

Sharon, for one, just moved from Queensland state to work. "I came specifically because I knew it would be busy for the Olympics," she said recently, late in the afternoon. Really, it was early in the day for her, since dancers like Sharon can work until 5 a.m. if business is steady.

The previous night, before the opening ceremonies, had been her first at Men's Gallery, a tabletop dancing club in the heart of Sydney's business district. She took home about $500 (about $275 U.S.) and figured that would double during the Games. "I came specifically because I knew it would be busy for the Olympics. And, I would be expecting to make good money," Sharon said. "If a girl has half a brain in her head, this is the place to be."

Sharon is one of hundreds, potentially thousands, of sex workers who've streamed into Sydney to grab a piece of the action during the Olympics. The dancer and swimsuit model is from Australia's Far North -- the Down Under equivalent of the United States' Deep South on this continent where the cities are smaller, the pace a bit slower. "Where I'm from, you don't normally get those kinds of nights until you have the sailing ships come in, like the Navy. The Americans," she said, and smiled.

Throughout the city, clubs and shops in the industry have been madly recruiting to beef up their ranks. "We'll never have too many girls," said John Etchells, general manager of Men's Gallery and two other tabletop dancing clubs in Sydney. He's scouting nationwide for staff, advertising in newspapers, magazines -- even on TV.

"We'll recruit every day of the week. I mean, I recruited a girl at half past 5 yesterday afternoon who walked in here." Etchells was still in the office, so he conducted an impromptu interview. "She was ready to go," he said, "so she worked at 9:30 last night." The new recruit was from New Zealand, and had worked in the U.S. and other cities in Australia, but not Sydney. Until now. But it's not just dancers who have come to Sydney focused on Olympic gold. Prostitutes plan to put in top performances, too, during the Games.

Prostitution is legal in Sydney and, indeed, in much of Australia. (In 1995, legislation was passed in New South Wales, of which Sydney is the capital, decriminalizing and regulating prostitution.) "Our brothels are the best in the world," said Fiona Patten, operations officer at Sharon Austen Ltd., an adult erotica company that listed on the Australian Stock Exchange in May. Praising local government oversight, Patten said, "It's one of the only councils in the world that has developed a health and safety policy for the sex industry."

A range of government agencies, including the state health department and attorney general's office, help fund the Sex Workers Outreach Project. Known as SWOP, the advocacy group offers advice and services to sex workers on health, employment and safety issues, educational resources -- even legal and financial matters, like taxes. (For example, a 10 percent goods and services tax went into effect in Sydney in July; it applies to sex services. Workers have to charge customers and remit the money to the government.)

Many people from places where prostitution isn't decriminalized "are going to be pleasantly surprised at what they find in a legalized sex industry," said Swan. Whatever their impressions, tourists won't "have to be looking over their shoulders when they walk in a brothel door," he added.

Street workers aren't able to ply their trade legally. But escort agencies and brothels are a different story. "It wouldn't surprise me if, for the couple of weeks the Olympics goes on, some of the more well-known brothels doubled their turnover," Swan said.

Fully staffed, Sydney can cater to all tastes. "They'll find all sorts of things," Swan said. "If they prefer transsexuals, there are specialist transsexual agencies that just have that." Visitors will certainly have a range of choices unavailable back home. For instance, "If there are women from overseas who want to hire a good strapping Australian young lad, they'll be able to do that," Swan said. What's more, the buying power of many international visitors, especially Americans, will get a boost from the weak Australian dollar. The local currency is trading at an all-time low, below 55 U.S. cents.

Several businesses, including escort agency the Executive Retreat, will be able to capitalize on their proximity to the Olympic village and stadium. Several new brothels opened to be close to the action within the past year or so. But all around Sydney, companies in the industry were ready for the Olympic onslaught, offering Games packages at special prices, stocking new product lines and expanding their hours, as well as adding staff.

"Most are planning to be open 24 hours a day, seven days a week," said Patten before the Games began. And across the Australian sex industry, advertising is up. In June and July last year, companies in this sector spent $350,000 (about $190,000 U.S.) on billboard, radio, television, newspaper and magazine advertising, according to ACNielsen AdEx. During the same period this year, that figured surged to $1.3 million (about $700,000 U.S.).

One company that juiced up its ad plans is Adultshop.com, a publicly traded adult-products company. "Moan, moan, moan. That's all we hear from our customers," according to one of its prominent city billboards. Media have been targeted, too. "We sent letters to the media," Etchells said. "Hopefully, they'll come." Olympic planners estimate that, on the busiest days, an extra 750,000 people will flood into Sydney's streets and stream by city shops. (The population is 3.5 million, normally.)

Wayne Nicol, managing director of S(a)x Fetish, is ready for the retail rush, after "working away madly, doing lots of lovely little things especially for the Olympics." (The name of Nicol's store is a play on the last name of the original owner, who opened it 18 years ago. That fellow's name was Sax.) Nicol's store in Sydney sells leather and bondage/domination products. He's got a new product range that includes leather paddles in the shape of a map of Australia. And, playing on the theme of the colors of Australia's sports teams, the store will stock green and gold genital whips. If that doesn't lure the customers, Nicol has also got hundreds of leather and bondage marsupials in the windows -- kangaroos, koalas and other cuddly creatures in chaps, corsets and harnesses.

Australians, generally, have a relaxed attitude toward sex and the industry. Ironically, however, in New South Wales, X-rated videos may not be sold legally. Meaning, commercial sex is legal, but watching it isn't. Could it be that things are just different in a place that celebrates Christmas in summer and Easter in autumn?

Whatever the explanation, industry executives blame outdated laws that haven't kept up with consumer demand; tourists will want to buy steamy Australian videos, Swan predicted. And X-rated Aussie flicks aren't hard to find. In fact, even though illegal to sell, "They're everywhere," Swan said. Enforcement might be a bit, well, flaccid.

Swan estimated there have been about 70 X-rated films made Down Under in the past decade. There's a discernible difference, too, especially in the ones filmed outdoors. "When they film them outside the light is quite different from Northern Hemisphere productions," Swan said. Talk about a unique souvenir: Olympic visitors will be able to take home movies showing "Australian countryside and landscapes in and amongst the explicit sex," Swan noted. "It kind of makes for an interesting film."

Now that the Games are open, the Olympic tourists are easy to spot: Most sport plastic accreditation tags designating their Olympic status as a VIP, athlete or journalist. Etchells says he can easily pick the tourists by their attire. Normally, the customers in Men's Gallery are suit-and-tie types. The Olympic visitors are dressed more casually, he explained. "And if they have any accreditation from the Olympics, they like to show that hanging around their neck." They're also turning up wearing hats, like the classically Australian leather topper Paul Hogan wore as Crocodile Dundee, called an Akubra -- a reference to the company that makes them. Typically, in Sydney, Akubras are scarce on the heads of businessmen or chic, urban Aussies. They're the kind of hats men wear in, say, Far North Queensland.

There are other giveaways, according to Ashley, the recent recruit at Men's Gallery. "There's always a way to pick Americans. They often wear brown boat shoes." That, and the tips. "People from the States love to tip."

Another sign the tourists have landed in Sydney? Business inside the clubs is booming. "We've been waiting for the change, hoping for the change, and I saw the change last night," Etchells said the day of the opening ceremony. Ashley figures the pace of things will pick up further as Olympic tourists settle in. "I think that the big money from the Olympics will come more from the middle and the end of the period," she predicted. "Once they've been going to a few Games, they'll find that they want to relax and do other things."

Undoubtedly, business will swell during the Olympics, although accurate data about sales are hard to come by. And government employment statistics don't sift out sex workers who, instead, are captured within categories like entertainers. Or waitresses.

No doubt that American will make his way to Men's Gallery soon to find out. And even if he's wearing boat shoes, an Akubra hat and ID tags, chances are he'll blend right in.

Becky Gaylord is a freelance writer in Sydney, Australia.