Geriatrics to the rescue

A South Carolina clinic is offering good healthcare to the uninsured and a meaningful life to retired doctors. Can the idea spread to the rest of the country? 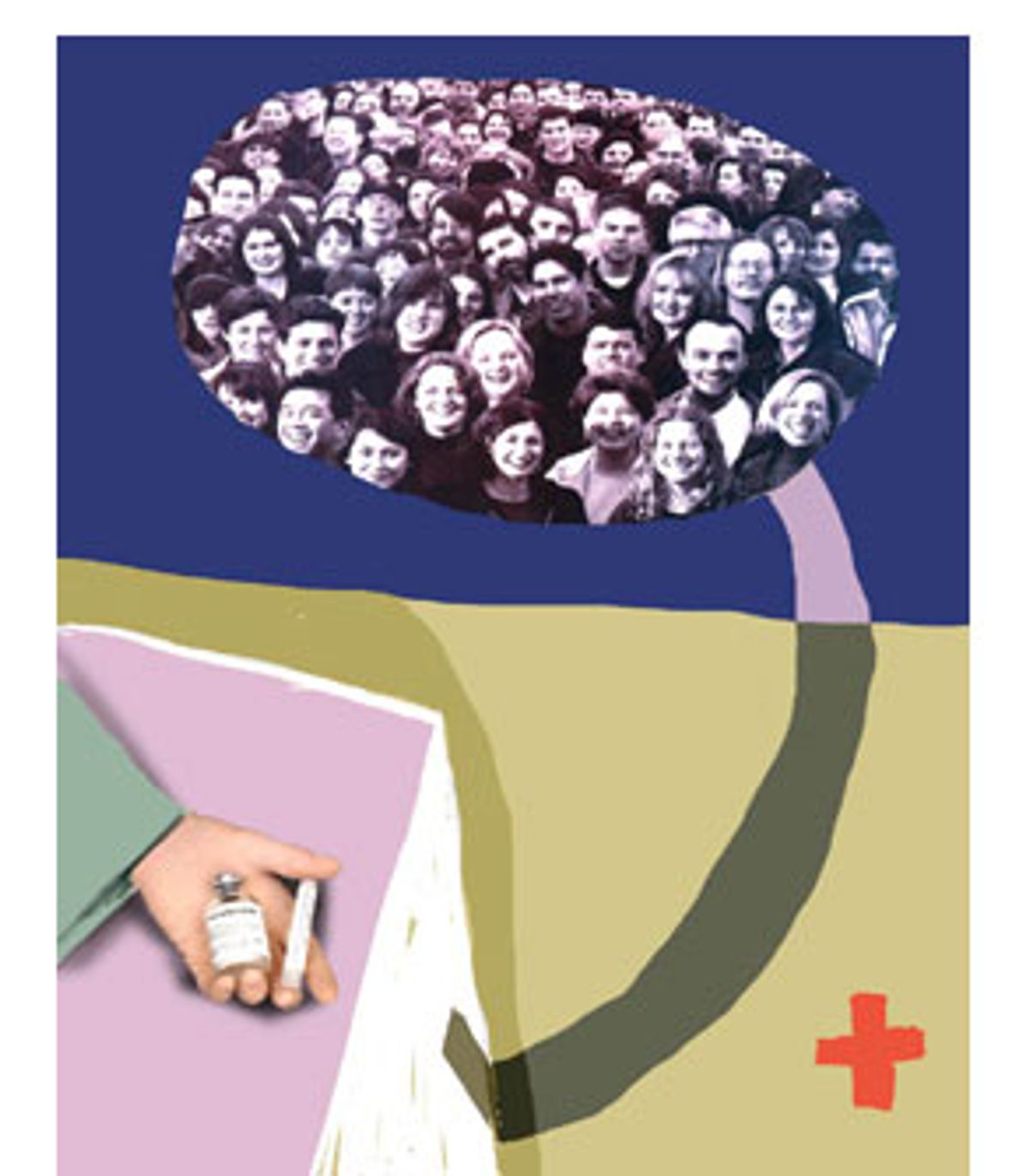 For 15 years, Irene never saw a doctor, and now she could barely see at all.

An uninsured diabetic with a disabled husband, the 51-year-old woman cried as she stepped into Dr. Jack McConnell's free clinic one recent afternoon. She feared she was going blind, and doubted, on only her second visit to the clinic after long years without any healthcare, that the doctors would be able to help.

An hour later, Irene, who wouldn't disclose her full name, walked out with a prescription for new glasses and a mood matching the bright Carolina sunshine. "I learned that I'm not going blind but will be able to see," she said joyfully. "I've found heaven."

Whether it's heaven, or just what any civilized place should offer its citizens, all agree that the Volunteers in Medicine Clinic, which McConnell established in this posh seaside resort in 1994, is a positive counterweight to the generally deteriorating trend in healthcare for America's poor.

McConnell's idea, which has more than a score of imitators around the nation, is to get retired doctors off the golf links and back into medicine -- largely as volunteers.

Hilton Head, with a year-round population of 30,000 and 2 million visitors each year, boasts one of the greatest concentrations of wealth to be found anywhere in the United States. But its population includes 12,000 working poor and uninsured people. Some, like Irene, hadn't seen a doctor in years before they came to McConnell's clinic. Some had never seen one. At McConnell's clinic, they may be treated by any of the 62 doctors and 65 nurses who volunteer their time and skills.

As a result, Hilton Head, unlike practically any other community in the United States, can boast that not one of its residents, nor those who commute to work at the island's hotels or in its exclusive gated communities, is without access to high-quality medical care. At McConnell's clinic, care and medicine -- including dental and vision -- are free to families with incomes below 200 percent of federal poverty limits (currently $16,700 per individual, or $34,100 for the average family of four).

What McConnell has done is to marry the skills of Hilton Head's large retired medical community with the needs of its army of uninsured: the people who water the lawns, bus the tables and manicure the golf courses.

McConnell hopes his idea can spread to encompass many of the 44 million uninsured in this country and the thousands of doctors who have retired early, frustrated by the changes in medicine wrought by managed care. An estimated 200,000 patients currently get care through volunteer doctor clinics that McConnell and others have set up.

"Can our approach to the delivery of care to the medically under-served be replicated in other towns around the nation?" McConnell asks. "The answer is yes - even in the poorest towns in the nation. The necessary resources to provide healthcare for every person in a town already exist in essentially every community. The key decision is to do it."

"It's my impression that every community needs this," he says. "There are many people who work for minimum wage in this country and in most places minimum wage just doesn't cut it."

McConnell estimates at least 160,000 retired but able-bodied physicians could staff these volunteer clinics. About 8,000 doctors retire each year, a figure the Robert Wood Johnson Foundation estimates will increase to 13,000 annually by 2010. A recent survey indicated that 38 percent of the nearly 300,000 physicians age 50 or older plan to retire within the next three years.

"They are tired of the hassles, the decreased reimbursement, the loss of autonomy and prestige," Dr. D. Ted Lewers, chairman of the American Medical Association, was quoted as saying recently. Referring to the shrinking pool of doctors around his home in Easton, Md., he added, "One told me it's just not fun anymore."

Volunteering allows the financially secure retired doctor to shed the headaches and bureaucracy of managed care and renew the early sparks of altruism that got him or her into medicine in the first place.

"People work here for love," says Dr. Brett Williams, the clinic's medical director. "A lot has happened with the practice of medicine in the last 15 years, not much of it positive. There are many people who practice medicine who just don't enjoy it anymore. But when you work here you enjoy it. It's very affirming. We take care of people who would otherwise do without."

"Our patients are so appreciative," says Dr. Roderick McLean, the clinic's 80-year-old OB/GYN. "I think the one thing that touches me very much is that when they leave they have this smile on their face and they say 'Thank you' and 'You've been so kind,' and then as they go by they just kind of reach out and they touch you. Literally touch you."

Since it opened in 1994, McConnell's 7,000-square-foot clinic has had about 80,000 patient visits. Most come for primary healthcare but the clinic also offers the services of retired pharmacists, chiropractors, social workers and psychotherapists. Several dozen lay volunteers act as greeters, babysitters and gofers, as well as interpreters for the island's booming Latino population.

Kindly gray-haired volunteers greet patients as soon as they walk through the door. Little children are gentled into a brightly colored room filled with books and tropical fish. Waits are short, and physicians have bountiful allotments of time for patients.

"They're getting better care than I am, let's just say that," says Anne Finn, the clinic's director of development.

"To say [the clinic] has been beneficial to our community is an understatement," says Town Councilman Bill Ferguson, a native islander, civil rights activist and small business owner.

"He (McConnell) is the founding father of a whole new generation of healthcare," says Dennis Bruns, CEO of Hilton Head's local hospital. "What he has done is literally provide access to healthcare for everyone. A Nobel Peace Prize, or something in that category, I don't think is out of the question for him because of the number of clinics he has helped set up around the country. I think it's just going to mushroom and create a whole new arm of healthcare in the future."

For the McConnell model to take off, though, it requires the support of communities where the clinics are created. In Hilton Head, with McConnell's powerful vision and arts of gentle persuasion, the town donated land for the clinic, architects drew up plans for free, and builders donated workers and material.

But what's a little surprising is the extent of community support for clinics elsewhere. In Lakeland, Fla., which plans next Valentine's Day to open a McConnell-model clinic to serve 25,000 people, churches, community leaders and local businesses helped raise $6 million to get the clinic going -- $3 million more than the target figure.

Through a nonprofit Volunteers in Medicine Institute, McConnell and his staff have helped establish 14 similar clinics across the country. At least 26 more are in development, says Amy Hamlin, the institute's director. All 14 of the operating clinics are doing well, Hamlin says. "Most of them are adding" to their staffing and hours of operation, she says.

McConnell himself retired in 1989 after a distinguished career. Trained originally as a pediatrician, he helped lead pharmaceutical industry development of the tuberculosis skin test, the polio vaccine and Tylenol, and directed the first commercial Magnetic Resonance Imaging (MRI) system in the United States. Toward the end of his career he helped draft the federal legislation that created the Human Genome Project.

"If you roll up everything I've done into one, they don't compare to the satisfaction that I got out of creating this clinic," says McConnell. "It's the most affirming thing I've ever done."

He grew up poor in a West Virginia coal-mining town, one of seven children of a Methodist preacher. He and his wife, Mary Ellen, planned to savor the fruits of retirement on Hilton Head, where golf, sunshine, tropical breezes and loaded buffet tables are the order of the day for the well-to-do.

One rainy day in 1991, McConnell gave a ride to a black native-islander, one of the island's many Gullahs - descendants of West African slaves -- and discovered that his passenger was one of thousands of invisible poor living in luxury's bosom without a shred of protection.

"It was a shocker to me," he says in his soft, Southern drawl. The cost of healthcare on Hilton Head is nearly 6 percent higher than the national average. The island's economy is driven by tourism, real estate and other service industries, which seldom offer their employees health insurance.

Getting the clinic off the ground required all the financial and political resources McConnell could muster.

To get an initial group of 16 doctors to sign on, McConnell had to line up cheap malpractice insurance. He managed to persuade the Joint Underwriting Association to insure all his medical personnel for less than $5,000 a year - a tenth of the normal rate. State legislators passed a bill giving the clinic a waiver of all medical licensing fees and tests. A $6.2 million endowment, raised through local giving and charitable grants, has been key to enabling the clinic to cover its annual $500,000 operating budget.

The local hospital saves $500,000 a year in emergency room visits by nonpaying patients thanks to the clinic's existence. And most of the McConnell patients who do end up in the hospital spend less time than they would have in the days when the emergency room was their only place to go.

Hal Millard is a freelance writer in Gettysburg, Pa.