Our ever-hopeful filmgoer suggests what might turn us on this fall and winter, and what might make politicians mad. They could be the same things. 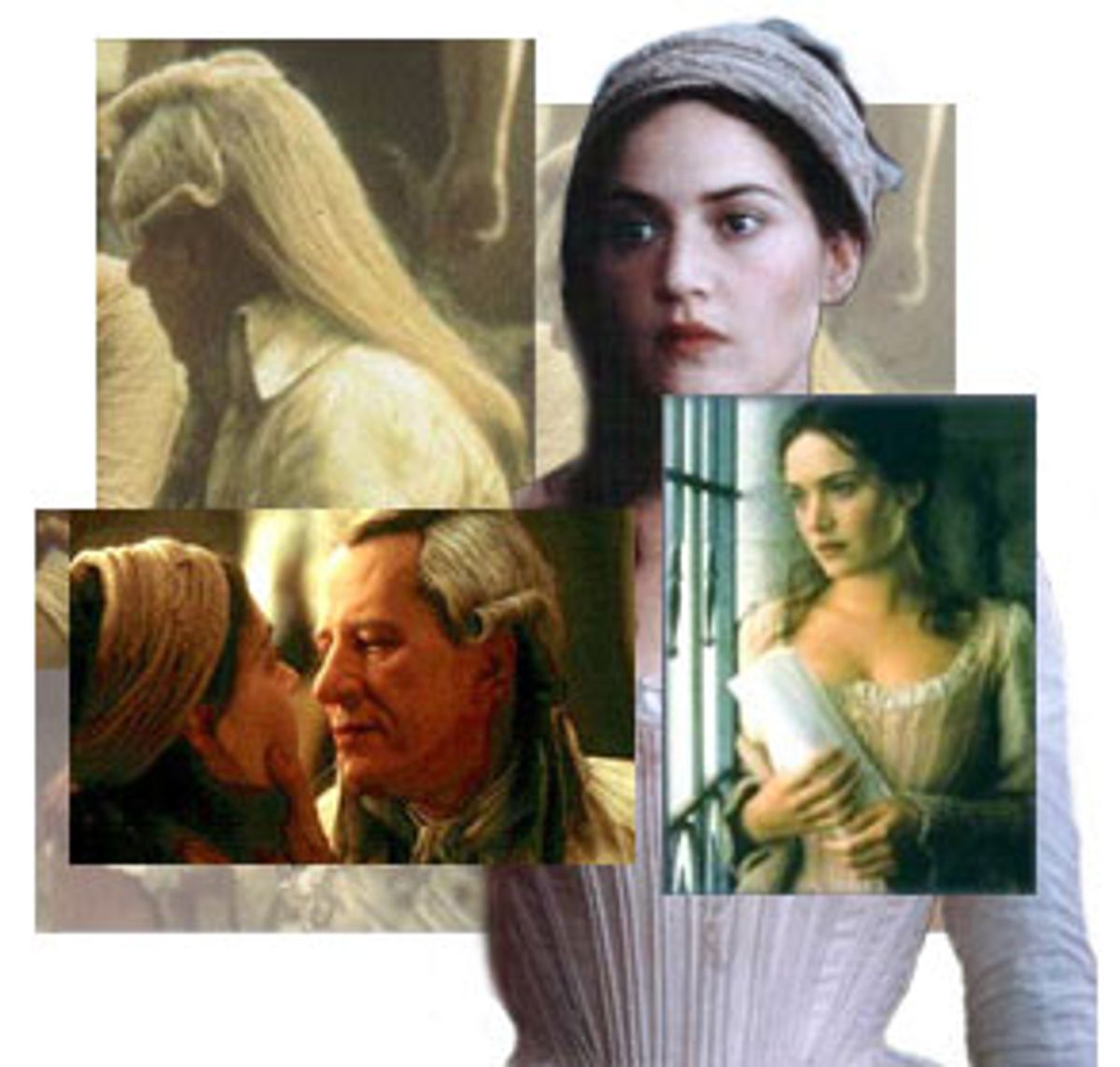 It's the custom every fall for movie people to pick winners and losers in the season ahead. But since my beat at Salon is movies (or anything) in which there is the hope of sexual excitement, this fall I may be walking into the jaws of Lynne Cheney, Al Gore and anyone else eager to take advantage of the notion that sex and violence in American movies are too American for us to see.

As it happens, I do make distinctions between sex and violence: It's my opinion that we don't know enough about sex, don't talk about it as much as we might and have lost the habit of seeing most movie imagery as a metaphor for sex. I worry more about violence -- not that there is definitive evidence one way or the other about the connections between violence seen and violence enacted. It's rather more that I grow afraid of people addicted to mythic violence. This is only a hunch, but that preoccupation with violence could be related to our ignorance of sex. I share Jack Nicholson's confusion over a society that will show breasts being slashed but turns coy if they are stroked.

The recent outpouring over the movies we see misses the point -- as always. The single most sickening point that the moviegoer must face is, quite simply, that the movies are so awful. I don't have many large hopes for "The Legend of Bagger Vance" (coming in November). It's about a golfer (Matt Damon) who finds his magic swing, and it's altogether a mix of sport and things mystical rather like the baseball picture "The Natural," which was a dud. What's more, "Bagger Vance" is directed by the star of "The Natural," Robert Redford. This is enough to conjure up the prospect of endless, exquisite scenes of high, pure, straight drives disappearing into the sunset at magic hour.

It may come to that, and no more than that. At the same time, it is Damon with Charlize Theron as his girlfriend. I've seen one still of them together in the film, and I smell chemistry. Is that sort of instinct reliable? No, and I don't think Redford has ever filmed or been involved in really sensual material on-screen. But sometimes two players can have an eye for each other that ignores omissions in a script and blind spots in a director.

Similarly, Taylor Hackford's "Proof of Life" (December) has me intrigued. An American engineer is taken hostage by Colombian guerrillas. Russell Crowe arrives to negotiate his release, but he falls in love with the engineer's wife (Meg Ryan). Hackford does have a feeling for sex. Remember Jeff Bridges and Rachel Ward in "Against All Odds"? And don't forget that Hackford himself has for years been the companion of Helen Mirren, one of the most desirable of grown-up women. But we have more still to go on here. For as the unit labored in the jungle so word leaked out that Ryan's husband, Dennis Quaid, was seeking a divorce because of the way she was feeling in her scenes with Crowe. Location romances are very common, of course, and most of them evaporate after filming. But sometimes there's some charge felt in life that the camera eats up greedily -- like Steve McQueen and Ali McGraw in Sam Peckinpah's "The Getaway." Plus, Ryan is a far better actress than McGraw.

Now, Antonio Banderas is married to Melanie Griffith, and I have every human hope that he will take care of her. Nevertheless, November gives us "Original Sin." This is a remake of Frangois Truffaut's "Mississippi Mermaid," which starred Catherine Deneuve and Jean-Paul Belmondo, and happens to be one of my favorite love stories. As redone in "Original Sin," Banderas plays a coffee-plantation owner in Cuba in the 1880s. He arranges for a mail-order bride, but when she arrives she doesn't look like the photograph he was sent. She looks awfully like Angelina Jolie.

There's no one so ready to go wild on-screen now as Jolie, and this is a good story in which the bride robs her man and runs away. He pursues her, with vengeance in mind, yet their love affair goes deeper and grows more perverse. Grant that this is directed by Michael Cristoffer, who made Jolie's HBO film, "Gia," and I think we have reason to be hopeful.

"The Contender" (promised for October) drew my attention because, at long last, it gives a star's part to Joan Allen, one of the best actors we have. She plays a senator who becomes a vice presidential possibility, until muckrakers discover that in her youth (not that long ago, Allen is only 44), she was in love with sex and a lot of men. In other words, she behaved like some men, and now she is not inclined to lie about it or to apologize.

Such a project could be crudely aimed at American hypocrisy and the election season. It could degenerate into a lot of talking heads lecturing one another. On the other hand, flashbacks could show the lady's past, and she could stand up for being a cheerful, wholesome man-izer (if you see what I mean), and all the better as a candidate for high office because she has lived, felt the heat of pleasure and reached a stage in which she is not deranged by sexual opportunity. That's a way of saying that President Clinton flirted with anyone because he hadn't had enough serious love affairs as a young man.

Did you enjoy "The Cider House Rules"? (Didn't you think Theron was sexy there?) I ask, because one of the movies I most look forward to is its director Lasse Hallstrvm's new film, "Chocolat." (For some of us that title is already halfway home.) This comes from the recent novel by Joanne Harris, and it's a story set in France in the 1950s. A woman comes to a small town and sets up a chocolate factory. As far as I can judge, this is a metaphor for the idea of pleasure itself confronting the cautious, cramped town. The woman is played by Juliette Binoche -- those eyes and sticky fingers? And she is helped by a man played by Johnny Depp. Hallström, Depp and Binoche are enough for me -- a trio as satisfying as vanilla, fudge and caramel.

This film is taken from Doug Wright's award-winning play, and it's a portrait of the Marquis de Sade in his last years of confinement at the Charenton asylum. Kaufman's de Sade (Geoffrey Rush) is a very dangerous man -- he's whispering freedom, outrage, desire and liberty in every ready ear. And he's endlessly writing -- eventually, deprived of proper materials, he uses bodily fluids for ink and the walls of his cell as paper. For Kaufman, de Sade -- however crazy -- is a test case for free speech, and all he's calling for, really, through his streams of pornography, is the recognition of sexual need and variety.

What makes "Quills" so remarkable is its vibrant, ironic tone. You feel the sharpness of a real quill; you hear the soul-scraping scratch of writing; you see de Sade as a monster and a spokesman for liberty. For this is a movie about the need for expression, a word that refers to direct utterance and sexual release, and that sees the two as related. In "Quills," it takes a reprobate to be the sexual counselor to a generation.

In this climate, that could get a movie into a lot of trouble. But it is so subtle and intelligent, I don't want to hear what Gore or Cheney thinks of it -- and whether it's good for me. So "Quills" needs courage in its own marketing. Yes, it's about sex and a notorious sexual outlaw. Yes, it's dark and very funny. And the distributor should be proud of that.

There's only one reservation I have. "Quills" could be an NC-17 film, or NC-15. It is not an entertainment that any 4- or 5-year-old should see just because his or her parents go with him into the dark. Company means only so much at the movies. Our imaginations go into the dark alone, and "Quills" is full of things a child cannot understand. But the R rating is a measure of our shame: It allows parents to babysit their kids at perilous movies, just as it permits the maximum box-office income to the business.

There ought to be a place for grown-up intelligence, for films and material not appropriate to children. A sophisticated society would honor the NC-17 rating and employ it carefully. It would be something like a badge of respect. Instead, we sentimentalize youth, and actually take risks by exposing it to things it has not yet experienced. That's where the movie business is vulnerable, and that's how the system of marketing we suffer under is likely to deny us adult entertainment (a phrase that need not be a synonym for pornography).