"Dancer in the Dark"

Lars von Trier is a mechanic, not an artist. And his movies are meat grinders he feeds his characters through. 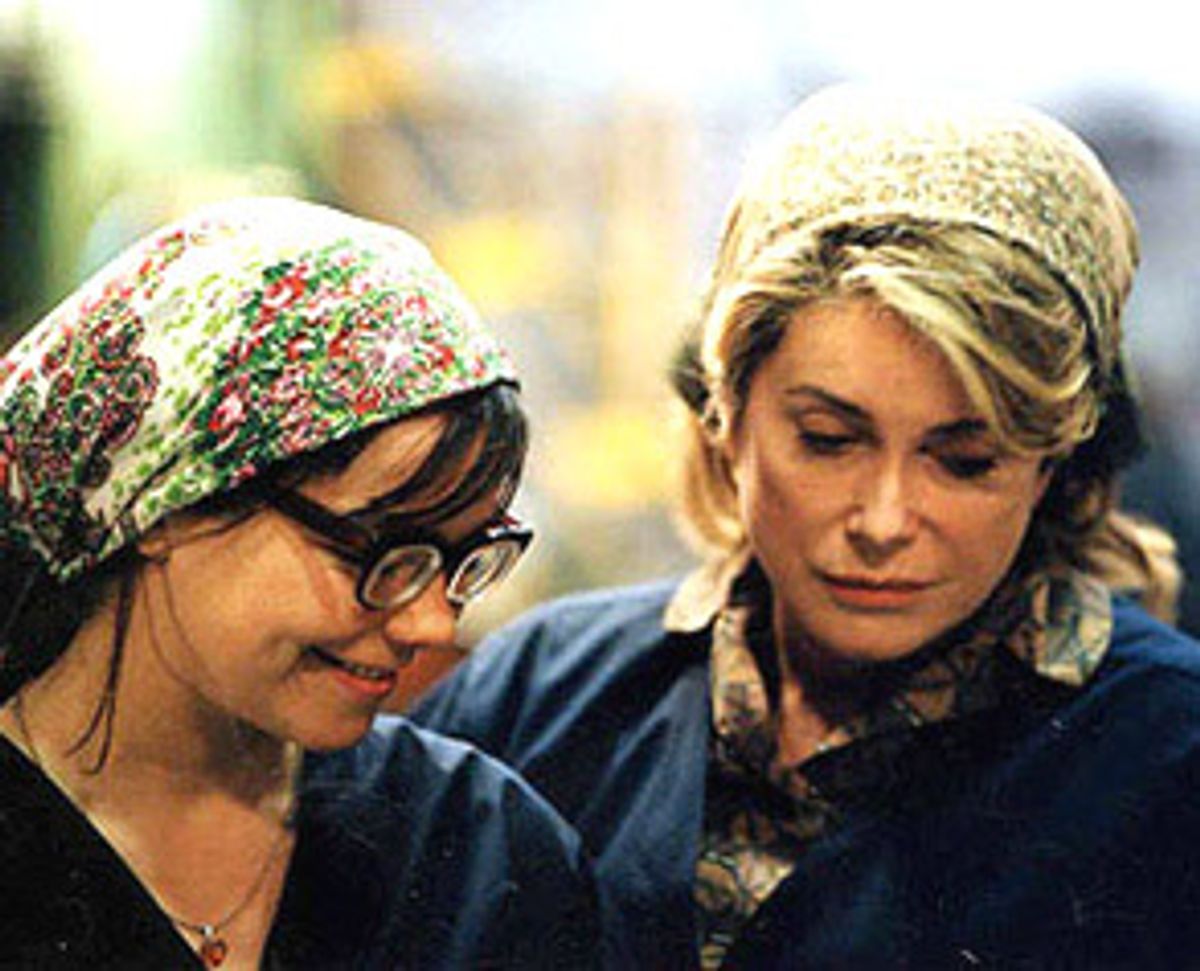 In filmmaking, as in life, ineptitude is forgivable. Ineptitude coupled with arrogance is not. In mechanics and technical skills, Lars von Trier is the kind of director who cares more about his own paltry vision than about his audience. He's a director who refuses to put the camera in logical places, who lets it swing and wobble woozily, who prefers film stock that makes his picture surface look like it has been soaked in dirty dishwater for three days.

His technique is supposed to be a kind of purity: He's a founder of Dogme '95, a school of filmmaking that decries movie "tricks" (you know, things like shooting in focus) as being manipulative and untruthful and holds directors to an unforgiving slate of unities of time and place and the like. (Only some of his films hold strictly to these precepts, however.) In his ruthless pursuit of honesty, von Trier makes his audience work overtime to fill in the dots between his lapses and misconnections, to add imaginary color where he has neglected to put any, to maintain alertness across the prairie-plains indolence of his storytelling. In other words, if we're bored, it's our own damn fault.

Von Trier has been directing features, shorts and TV series since the late '70s, but he didn't gain international attention until the 1996 "Breaking the Waves," a logy, depressing parable about faith and sex shot in faded colors with a wobbly, weaving camera. The lead character, Bess (Emily Watson), is an unstable young woman who's gradually destroyed by love and her own libido and is finally punished for her sins of the flesh. Von Trier has a predilection for tales of misery and heartache informed by hoary mores that represent the worst of the Victorian age. He's also guilty of unabashed sadism toward his characters (and we think he delights in making us suffer) and a very thinly disguised contempt for -- or, perhaps worse, pity toward -- women.

"Breaking the Waves" is generally said to have been acclaimed, but for every critic who slavered over it, there seemed to be at least three who took arms against it. With "Waves," von Trier's crimes were already stacked a mile high; with "Dancer in the Dark," his tall tower of insolence topples with a hollow clatter. The film is a numbing, nearly three-hour musical about a factory worker named Selma (Icelandic singer Bjvrk, in her motion-picture debut) who's losing her sight and is struggling to save for the operation her son needs to rescue him from the same fate. Selma loves musicals -- she's delighted to have been cast in a local community theater production of "The Sound of Music," even though she can't come in on cue or carry the tunes.

Selma loves musicals so much that she lives her life as if she were eternally locked in one: At the factory where she works, the heavy chug-chug of machinery arranges itself into hypnotic rhythms to which she sways and dances, falling into reveries of song that cause her to forget what she's doing and damage expensive, dangerous machines, although she does, miraculously, manage to hang onto all her limbs. She has her share of protectors: Jeff (Peter Stormare), an adoring but "slow" suitor; her factory friend Kathy (the astoundingly out-of-place Catherine Deneuve, whose Teflon grace is one of the few things here that von Trier is incapable of wrecking); and the landlords from whom she rents her pathetic (natch) little trailer, local cop Bill (David Morse) and his wife, Jean (Cara Seymour).

In addition to her factory job, Selma takes little side jobs, like sliding rows of bobby pins onto cardboard cards; she amasses a wad of money that she keeps hidden in a little tin box. But one day something goes horribly wrong, and Bill accuses Selma of having stolen that money from him. From there, some really bad things happen. And then some really bad things. And so on. Von Trier has begged critics and viewers not to reveal the ending once they've seen the movie, and I have no intention of doing so. Believe me, the last thing I'd want to do to any poor soul patient enough to suffer through this monstrosity is spoil the "surprise" at the end.

But there's plenty of stuff in the middle you should know about. Shot on digital video, the picture, all muddied grays and browns, moves with the slowness, but not half the beauty, of a garden slug. That's purely intentional, an artistic statement. We know it because during the musical numbers -- the times when Selma breaks free of her workaday worries to sing and dance on railroad tracks, factory floors and other unlikely places -- the picture becomes brighter, more colorful. We actually get to see some puke greens, and a few dabs of mustard yellow. The numbers are clunkily staged -- they're static and badly choreographed -- so you're grateful for every extra dribble of color.

The music, unfortunately, isn't stellar enough to act as much of a distraction. Bjvrk, who also scored the movie, is one of the most captivating and complex figures in pop music: She's part pixie princess, part torch singer; part deconstructivist modernist, part romantic landscapist. Her lovely wayward warble, especially her shivery reading of "My Favorite Things," is at least a welcome relief -- a familiar and pleasing voice calling out from a landscape far more rocky and parched than Iceland. Divorced from their setting, the songs may have some sparks I couldn't catch in the theater. (I confess that since I saw the movie, I haven't had the stomach to risk reliving the horror by listening to the music.) But in situ, they seemed pointlessly meandering, droney and dull, as if the grayness of the movie had leached into them.

Bjvrk, who won the prize for best actress at Cannes for this performance, almost escapes that grayness. (The film also won the Palme d'Or at Cannes, to boos from the audience.) She shows both a sweetness and a kind of openness that suit the character perfectly, and she knows how to deliver a line -- the odd pacing of the dialogue has nothing to do with her and everything to do with von Trier's gummy style. (It permeates every scene in this movie, as well as "Breaking the Waves.") Bjvrk has claimed in a recent Esquire interview that her experience with von Trier, which she characterized as one of "profound cruelty," has soured her on acting forever, and that's a shame: She's gently appealing, and even in her toughest, most over-the-top scenes, she has a sense of restraint that allows her to maintain her dignity amid the meshugas. Her scenes with her young son, Gene (Vladan Kostic), in particular have an affable and touching quality -- she adores him and mothers him, but she's so girlish herself that they're almost like young cubs together.

Von Trier doesn't know what to do with a good actress when he gets one. Judging from Bjvrk's performance here, and from Emily Watson's in "Breaking the Waves," it's clear he delights in finding actresses whose faces are capable of virtually beaming with hope, just so he can twist, bend and break their characters to fit his wretched little stories. ("Oh, Daddy, how lovely, you've brought me a kitten! And a great big anvil on a pulley for little brother!") Von Trier surely believes he's creating high drama with his little puppet plays, but broken down, his approach is almost shockingly simplistic: His method involves taking characters we want to believe in, characters we'd like to love, and doing the equivalent of tying them onto railroad tracks as the train approaches -- repeatedly during the course of a movie. He spends the greater part of a picture getting them untied just in the nick of time, until the last time ... Alas! It's too late. That's not dramatization; it's a lazy formula masquerading as high art.

A director isn't a misogynist simply because he shows us a suffering woman. But when that suffering becomes the axis of a picture (as in both "Dancer in the Dark" and "Breaking the Waves"), the force that generates all its momentum, with no redemption and no relief in sight, with no point beyond the suffering itself, you have to wonder if he's not just getting his jollies off it. Von Trier cleverly disguises his stories as feminist tales -- fables about women who stand up to bullies, who stand up for what's right, who speak up for their own needs and desires, only to be broken and destroyed in the end. The outward message is: "See how women are punished for integrity and honesty?" And it's always either a man or an unjust god who's doing the punishing.

Great art can be, and has been, made out of similar raw materials: Look at Thomas Hardy. But von Trier doesn't have the thistle-rough delicacy of Hardy, or the thundering compassion. As viewers and as human beings, we can't help feeling sympathy for Selma in her hopeless and grave situation. But von Trier's jerky camera moves and meandering pace, far from making us forget that we're watching a movie, only remind us that we're being manipulated in the most obvious and cheapest way. For all his ideals and alleged standards, he's a mechanic, not an artist, a builder of highfalutin meat grinders to feed his characters through. In the case of "Breaking the Waves," the mess that came out the other end smelled bad enough. With "Dancer in the Dark," von Trier is long past his sell-by date.