Penilope Cruz stars in a movie that, though sexy on the surface, is not particularly interested in sex. 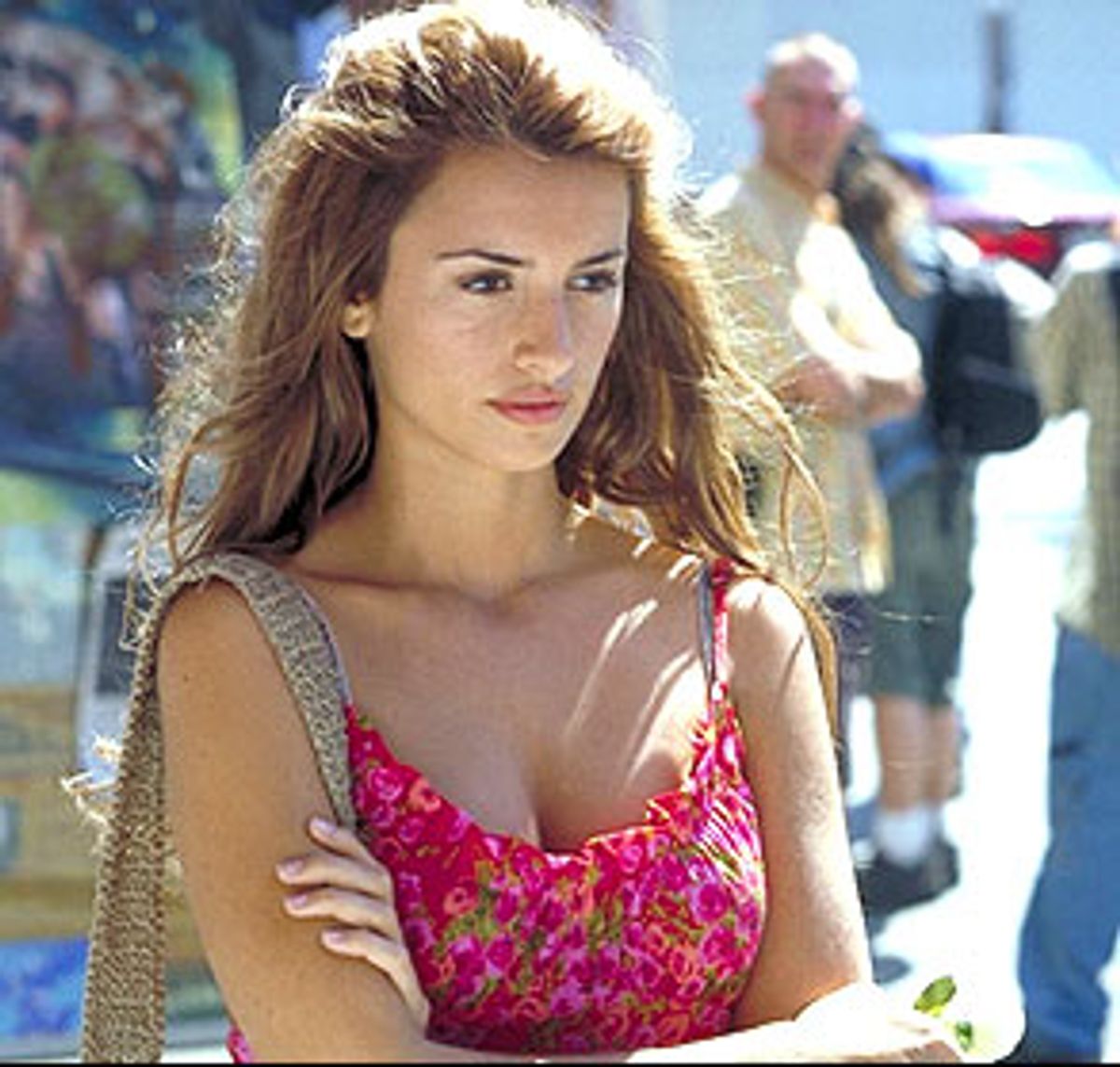 Considering that '50s housewives have gone the way of bouffant hair dryers and home sunlamps, it's amazing that movies are still being made for them. "Woman on Top" is one of those movies, although you might not realize it at first. That's because it has cleverly disguised itself as a perky little tale of female empowerment, a fable about a beautiful woman and her powerful sexuality, or at least her very nice hair.

The truth is, "Woman on Top," with its winkly-twinkly touches of magic realism and its travel-brochure tropical sensuality, isn't about anything as messy as sexuality. The picture's saucy title, its advertising logo (a pair of plush red lips formed by two red peppers curling toward each other), its gorgeous star, Penilope Cruz -- they're all designed to make you think "hot" before you even step into the theater. But instead of hot, you get barely lukewarm -- a tepid and oily "Calgon, take me away!" bath that seems to be aimed at women who don't get out very much.

Isabella (Cruz) is a Brazilian lovely who sure can cook: She runs a restaurant with her dashing husband, Toninho (Murilo Benmcio), although she does most of the work while he socializes with the customers. Because Isabella and Toninho go home to make mad passionate love every night, it's all OK -- until Isabella catches him with another woman.

She packs up and leaves, heading for the United States (San Francisco, to be exact). There she hooks up with her outrageous transvestite friend (every girl's gotta have one) and enlists the aid of the sea goddess Yemanja (I warned you about the magic realism) to overcome her heartbreak. And overcome it she does: In case you miss the part where she decides she feels better about things, you'll be able to tell by the way she has traded her slumpy, couldn't-care-less cardigans for miniature slip dresses and high heels. Before you can say "Bam!" she has her own cooking show and a giant following of lovesick male fans. She's happy for the first time in ages -- until she learns Toninho wants her back.

There's nothing inherently wrong with any of that, particularly when you consider Cruz's undeniable sex appeal. Effortlessly winning in Pedro Almodsvar's "All About My Mother," Cruz came off as a relaxed and intuitive actor. And there's just no denying she's a stunner, with her lush waterfall of hair and a smile with enough kilowatts to light up a small city.

But director Fina Torres and screenwriter Vera Blasi barely give her a character to play. It certainly couldn't have been their intent to buy into the idea that beautiful women are necessarily shallow and uninteresting, but that's the ultimate effect of "Woman on Top." Isabella seems more furnished than fleshed out: She has a fiery wardrobe of ethnic-looking clothes, including flirty little off-the-shoulder tops and flounced skirts. Her every movement gets a nice backdrop of sound, thanks to the movie's soundtrack of softly alluring bossa nova and samba tunes. And she's given a few endearing tics, like her tendency toward motion sickness. In a car, she cures it by being the one who drives, and in bed, she must always be on top: This is one of Toninho's issues with her, that she doesn't sufficiently allow him to be the man.

Or maybe it's just a fake and facile argument on which to hang a limp little movie. In any event, Benmcio's Toninho is darkly good-looking but hopelessly vapid, and the transformation his character allegedly undergoes feels completely manufactured. In fact, all the actors feel like nothing more than accouterments for Cruz: Mark Feuerstein, as the dull but well-intentioned TV producer who falls hard for Isabella, is so ineffectual he barely registers on the screen next to her. Harold Perrineau Jr., as Monica the transvestite, has some funny, tossed-off lines, but she's really just another version of the classic girlfriend sidekick. Torres and Blasi may have thought they were spicing up the character by making her a biological "he," but it only comes off as a gimmick, especially when you consider that Almodsvar does it so much better.

Torres and Blasi wrap up the movie's central conflict so rapidly and so carelessly that it feels like an afterthought -- as if they're eager to give the audience its happy ending, hoping against hope that viewers won't stop to think about what that ending really means. (I don't want to give anything away, but the conclusion involves a compromise on Cruz's part that seems to come out of left field.)

Worst of all, though, Torres just doesn't know what to do with Cruz. Cruz is so excruciatingly lovely that her beauty needs to be treated as a great joke, as if she were some extraterrestrial being who has landed here to charm and beguile us: Torres gets the feel exactly right when she shows us a stand of limp tulips on the street that magically spring to attention as Isabella passes by.

But aside from that one gently witty moment, "Woman on Top" is just a string of cute gags and pouting on Isabella's part that's supposed to signify soul-searching. And as aggressively sensual as the picture is (shot by Thierry Arbogast, it has a steamy, florid look), it's less about sex than it is about fulfilling some thinly disguised "sand on sun-kissed skin" fantasy. Even with its veneer of hip sizzle, it gives off about as much heat as those depressingly generic ads for island vacations that show ultratan couples strolling hand in hand on a beach.

In "Woman on Top," we're repeatedly reminded how gorgeous Isabella is, as if we couldn't see with our own eyes. But the picture addresses her sexuality only in the vaguest, blandest terms. Isabella is a good girl: She doesn't have wanton casual sex, and when she thinks she wants to, it's the target of her careless affections who stops her, even as she's pawing him on the couch. What a swell guy!

Worse yet, we're supposed to unquestioningly accept that she's exceedingly sexual simply because she's beautiful, and that's depressing for a number of reasons. For one thing, it's a view that constrains the movie's potentially dazzling star. And if this were a movie targeted toward men, the approach would be immediately identifiable as a textbook male delusion (every beautiful woman is by definition hot) brought to fruition.

Somehow the fact that the movie is a reverie based on female romantic fantasies is supposed to make Isabella's paper-doll sexuality more palatable. As it is, "Woman on Top" is a sexy-on-the-surface movie that's not particularly interested in sex -- and if that's not a stereotypical '50s housewifely notion, I don't know what is.