After retiring from the Chicago Cubs, the former slugger says he developed a new passion -- making money. 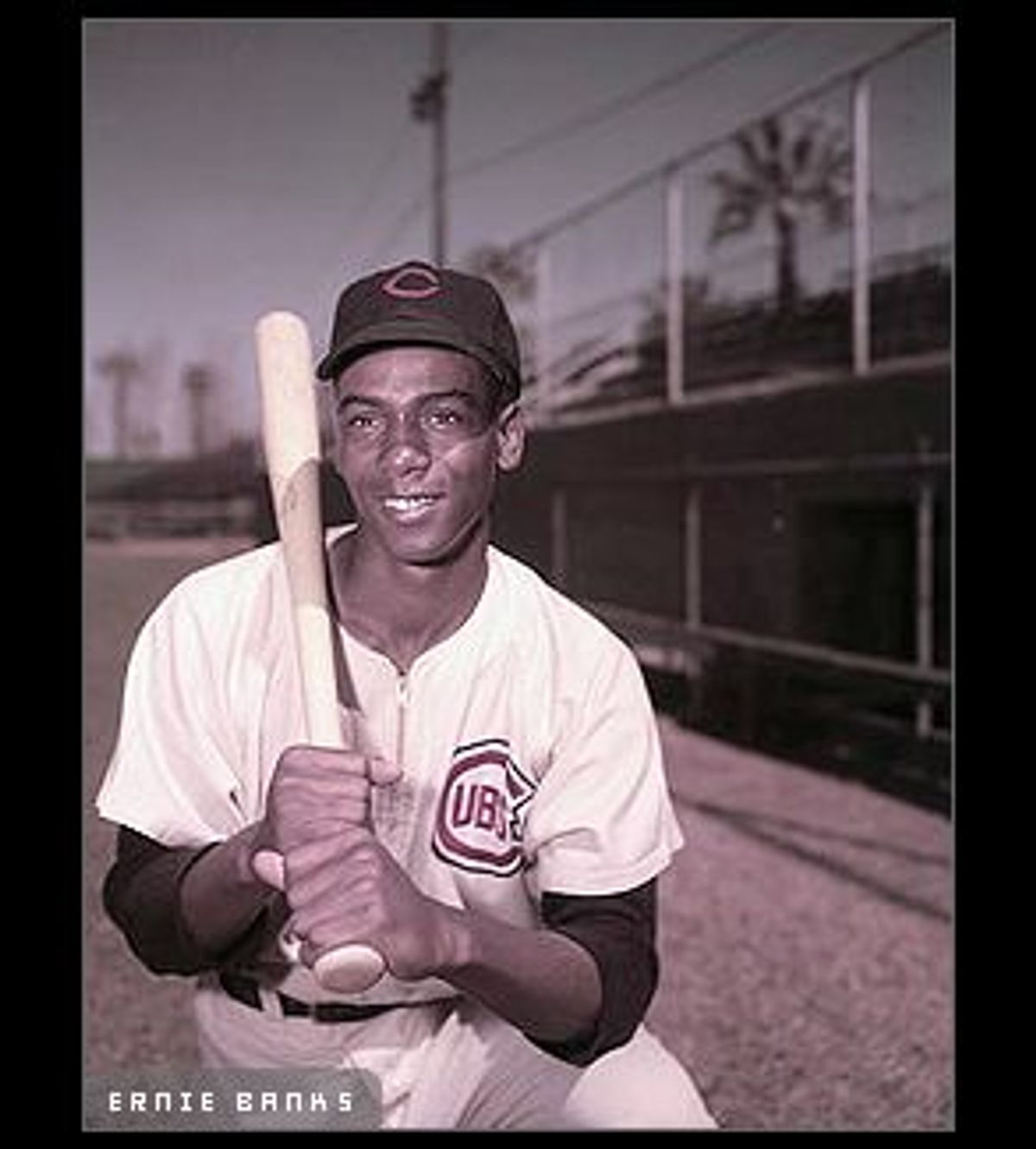 You have to know two things about Ernie Banks: He never stops moving, and he never stops talking. Half a year from being a septuagenarian, Banks repeatedly postponed the interview to exercise, play golf and meet Nelson Mandela. I was going to question that last excuse, until I remembered that Banks introduced Hillary Clinton at the 1996 Democratic National Convention. Banks has come a long way from Dallas, where his parents' grocery shopping would consist of buying a month's worth of rice and beans.

Between Mandela and Hillary Clinton, and rounds of golf with Bill Gates and Warren Buffett -- Ernie is a gold glove name-dropper, but he's earned the right -- Banks established himself as a part of baseball history. In 19 years with the Chicago Cubs, he hit 512 home runs, won two Most Valuable Player awards and etched his agreeable nature forever in popular culture with the slogan "Let's play two!"

During your baseball career, how did you manage your finances?

In my second year with the Cubs, P.K. Wrigley [Cubs owner and CEO of Wrigley Gum Co.] had a banker meet with the team and offer to set up a trust at the First National Bank here in Chicago, to save a little bit of money at a time, whatever we wanted to save. I think I was the only one who took it. I couldn't touch it until I was 55, but they invested it in stocks and when I was 55, I had $4 million in the bank.

How much was taken out?

You don't hear many athletes today crediting team owners for their good fortune. It seemed like you did well by the Wrigley family.

I learned from Mr. Wrigley, early in my career, that loyalty wins and it creates friendships. I saw it work for him in his business. I kind of grew up in this city, where loyalty really counted. The Wirtz family here. George Halas, who owned the Bears. I worked for another company, New World Van Lines, which was very loyal to their people. Mayor Richard J. Daley was the mayor when I first came here. He was very loyal to his constituents. Loyalty and friendship, which is to me the same, created all the wealth that I've ever thought I'd have. When I wake up in the morning, I feel like a billionaire without paying taxes.

Did you learn anything about investing from Wrigley?

Mr. Wrigley believed in this: Put all your eggs in one basket and watch the basket. They don't do that today. This is the old-fashioned way I'm talking about. He carried it on to his business. Do one thing and stay with it. I learned that from Mr. Buffett, too. He deals with things that are permanent, like Coca-Cola: People will always drink Coke. Gillette razor blades: People are always going to shave. But it all comes down to friendship, treating people right.

When I was the first black Ford dealer in the United States, Mr. Wrigley and my friendship with him is what made that happen. He knew Mr. Ford. I called Mr. Wrigley and said, "Mr. Wrigley, I'm going into this business and I don't know a lot about it, I need your help." He said OK and he called up Mr. Ford and they set me up in the dealership as a partnership. Mr. Wrigley even bought the first car from me. And when I got in a little difficulty, they got me out. Friendship is what I'm talking about.

When you retired from baseball, did you know what kind of work you were going to do after that?

Work? I never worked a day in my life. I always loved what I was doing, had a passion for it. Bill Gates told me that in February. I was with him and Warren Buffett. He said, find your passion and go with it.

Where did you meet Buffett and Gates in February?

Buffett invited me to a golf tournament in Omaha and I went to play in it, and we became friends. And he invited me to his stockholders meeting.

Do you own any Berkshire Hathaway stock?

I own stock, and I also insure my car with Geico.

(Ernie had to interrupt the interview to take a call. When we continued, I was treated to a short concert.)

That's what I'm talking about. In my life (singing) I've been a puppet, a pauper, a pirate, a poet, a pawn and a king. Each time I pick myself up again, that's life. You heard the lyrics to that song? That's Sinatra singing.

You can sing about being a pauper, Ernie, but you ended up far better than a lot of athletes of your time. Why?

People ask me a lot about the values I got from playing for the Cubs for so many years. The value I got out of it was patience. A lot of people these days are not very patient. They want things right now. It's a "now" generation. What I've seen with my contemporaries -- Joe Louis, Jesse Owens -- [and] the many people I've seen in ... entertainment ... [is that they] have had difficulties of all kinds, [like] Kareem Abdul-Jabbar. It comes and it goes, but I think, with patience and good friendships, I've had a better time of it.

When your baseball career ended, what replaced your passion for baseball?

That's a real good question. A passion for money. I started working at a bank in Chicago -- Bank of Ravenswood. I wanted to know about money. A friend sent me to the president, and he hired me. And I trained in that bank in every department. Accounting, I was a teller, worked in public relations, new business development, all through the bank. I wasn't an expert in it but they took me through all that.

Did you do any other work in the money business?

What did you do after that?

Another friend hired me to open doors for him in the moving and relocation business. I did that for 10 years, am still doing it. And I do some work for the Cubs, in community relations.

Are you active as an investor? Do you have somebody doing your investing for you?

I do. Morgan Stanley Dean Witter, Michael Seymour. He's a genius in money. I talk with him almost every day. In fact, I talked with him today about a company called ACS. I'm going to play golf with the CEO of ACS. It's a company in Dallas. He's a friend of mine. Friends again. You can look this company up on the Internet. It's a $2 billion company; they made $100 million profit last year. It's a fabulous company.

So you're thinking of investing in ACS?

No, I'm playing golf with him. Mike Seymour will decide on my investments.

When was the very first time you ever said, "Let's play two"?

You must be pleased that it has become such a catch phrase, for you, for baseball, for good times?

Yes, and I want to live up to that. As we speak, I'm going to work out, so I can build up to be able to do that. When the other guy's getting tired, I want to be able to say, "Come on, let's do some more." It's a kind of philosophy of my own life, to create the energy enough to keep on going. I love it. My company name is Let's Play Two, and my Web site is www.letsplaytwo.com.

Thank you very much, Ernie. If I get to Chicago before the end of the season, maybe we can play a round of golf?

Mike Craig is an attorney and writer in Chicago. He has written for Online Investor.