The boy and I made each other blush, but I couldn't express my illicit feelings to him. 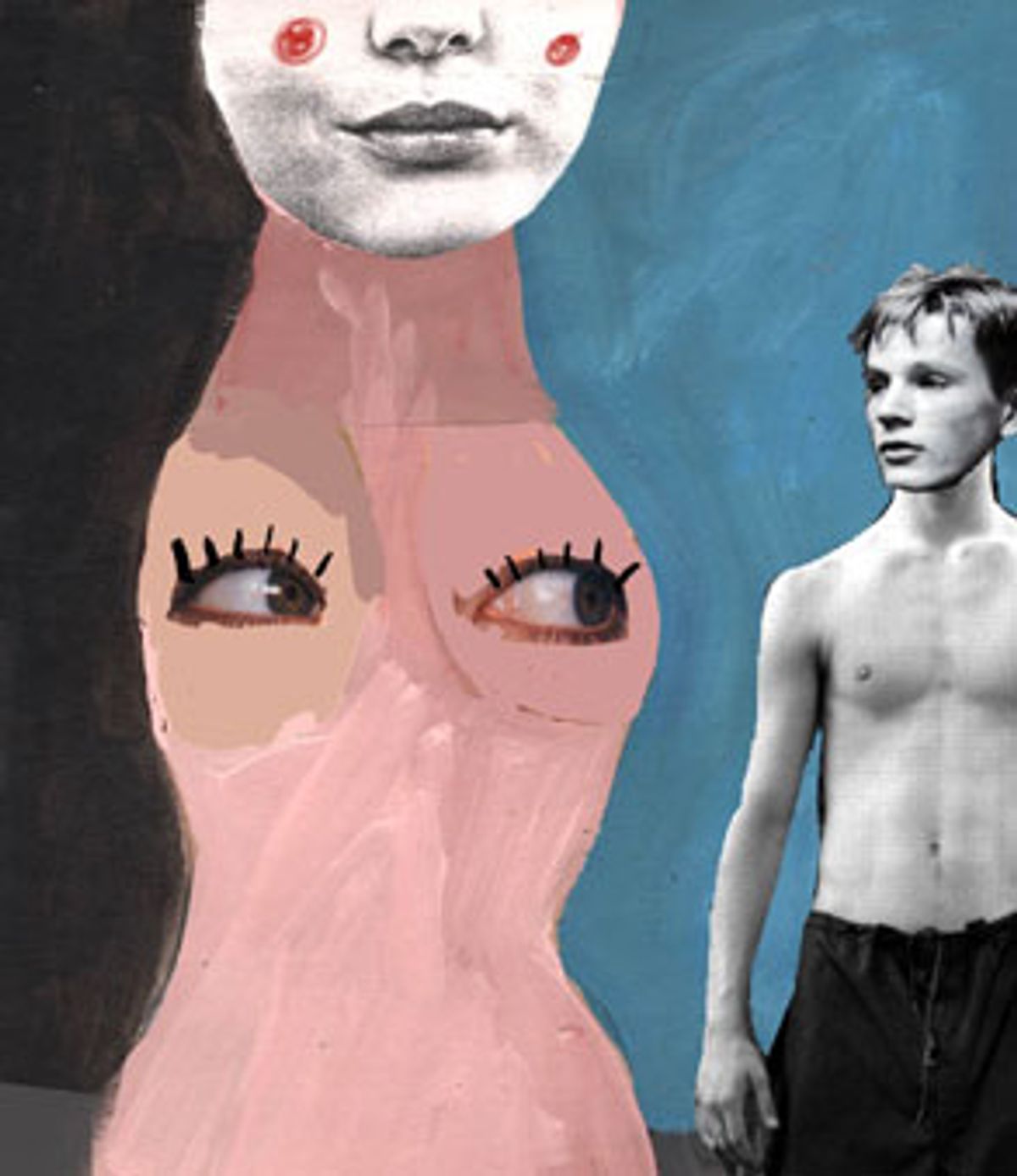 He lopes about the house with an old fly-fishing hat on his head; he is wearing a woolen jumper, jeans and old socks. When he laughs he throws his head back with unaffected delight, so that I can clearly see his tonsils vibrating in his throat. He sits with me for hours, his legs hanging over the armrest of a chair, passionately interested in my conversation. He tells me his stock of off-key, schoolboy jokes and laughs uproariously at mine.

I stare at him in wonder. He is at the height of his allure. He has the skin of a ripe, red rose petal; his lashes would make a baby wince; his green eyes gaze at you with the guile of someone who has no idea of his sexual power. He has emerged from his boyhood plumpness to reveal a tall, languorous body -- with strong, sensitive hands that no self-respecting teenager should have.

I read this and become embarrassed at such bodice-ripping prose, but it would do him a gross injustice to describe him in masculine terms. His beauty is a feminine marvel.

His awkwardness is wonderful to watch because he is at the cusp of sexual knowledge. Girls who would barely give him the time of day are suddenly inviting him to parties. His sister comes home from school and tells him the latest trail of new friends she has made because she's his sister. He looks horrified at these revelations. His face turns a slapped red and he sinks lower into his chair.

He is just finishing school, and his final exams commence in a few months. I've become increasingly interested in him as I've watched him grow from a farty, petulant boy into a young man on the brink of manhood. I regret that to admit to an attraction to anyone under the age of 20 is considered ill-advised by today's ambiguous moral standards. My attraction is automatic. I can't help myself and I don't want to make apologies for it. My instincts rebel against suppressing what others might view as abhorrent. I'm almost twice his age -- but at what age does anyone cease to appreciate beauty?

I look at him and marvel at his physical stature. He has grown from a chubby boy with an annoying habit of following me and his older brother around to a person of wit and humor. His physique evokes images of Greek athletes on ancient urns. It may sound as if he's a poster boy for a Versace campaign, but nothing could be further from the truth. There is none of that posed polish about him, and the closest he has come to designer clothes is his fishing vest, which holds his treasured flies and floatant.

He asks any question his imagination sees fit to solicit. "Do you think I could grow hash in the herb box and convince my mother it was oregano?" He leaps up to refill endless cups of tea and forces me to drink his father's wine so he won't get all the blame for emptying the bottle. At the moment he prefers to be with me, even when his friends call to invite him on a night out with fake I.D. I urge him to go, and with shattering frankness he says he'd rather be here with me. Ah, youth ... was I ever this candid?

He is becoming aware of his sexual needs, and he is using me to step a little closer to the heat. His desire for a woman who has been a friend of his brother's puzzles him. I can see him concentrating on me when I'm with others and wondering why he is having these feelings for a 31-year-old woman. His desire is evident when he settles himself next to me and casually pushes his long thigh against mine -- and it's evident when I see him looking at the pulse that beats at the base of my throat. He blushes in waves of red heat at these feelings, and I take perverse pleasure in knowing my attractions are not going completely unnoticed.

We once had an amazing picnic on the side of a river. There were three of us: my girlfriend, he and I. The reason for the outing was supposedly to fish, but the day demanded a different rhythm than wading upstream with fly rods searching for elusive trout. Instead, we found a huge rock overlooking the stream and pulled out food, wine and a pack of playing cards. It was a day of enormous hilarity, of playing cards and occasionally leaping into the river to cool off and scare the trout. Afterward the three of us lay sprawled over one another, someone's head resting on another's stomach, another's arm stretched indolently across someone's chest. From a distance it would have been impossible to see where one body began and the other ended. The three of us lay there like a still life, lazily brushing away flies and slowly falling into blissful sleep. It was an enchanted day -- probably never to be repeated -- and that's how I'll remember him.

The chance of anything happening between us is as likely as taxes being abolished. I am no Mrs. Robinson. I don't have the chutzpah to introduce him to sex -- though I wish I did. I wish I could take his hand and place it on my throat; I wish I could bend my head and feel the touch of his lips at the base of my neck. But it's not going to happen that way. I'm too scared to act out these fantasies. I would fall too far into the emotions that would engulf me. If I weren't so impressed with him -- regardless of those astonishing looks -- maybe I could stroll him through an introductory course in sex, but then I'd be instrumental in ruining a friendship and destroying a family's trust. It all sounds stupidly outdated in today's "take no prisoners" attitude, but I am terrified of the emotional devastation it could wreak.

All of us have been scarred by a harrowing incident that happened to a very dear and mutual friend of ours. Our friend was accused of sexual assault on a minor, and the shock to our close-knit group still reverberates inside all of us. He now lives on the other side of the country and won't ever return to be part of our group. Police proceedings were brought against him even though there was no conclusive evidence except for the child's word.

I know the child involved in the scandal. Regrettably for my friend, the boy's word cannot be doubted. Still, it's simply one person's word against another's and that has effectively polarized all of us. The police involvement was incidental to the pain the situation has caused. This is another reason why I won't ever act on my feelings. I'm frightened of the potential consequences. Is sexual gratification worth this?

Most important, I could never tell him of my feelings, because they're not for him to know. My delight in him comes from his innocence, his untrammeled delight in the idiotic and his wonderful wit. His all-encompassing charm is based in his utter ignorance of his sensual beauty.

But I know these astonishing looks are fleeting. I am attempting to render his elusive beauty into something tangible. I want to capture this moment to treasure later. He will leave home this year and move to bigger cities, wider experiences, and that will inevitably erode his purity. I don't doubt I will always find him a fascinating person, but it is he as he is now that has stopped me in my tracks.

I make no apologies for my continued attraction to this remarkable boy. And if this acknowledgment seems depraved, I make no apologies. I refuse to be painted as a predator of young boys. The world is not allowed to be that black and white.

Cathy Jones (not her real name) is a freelance writer.