Though she didn't start the memoir craze, Mary Karr feeds the frenzy with "Cherry." 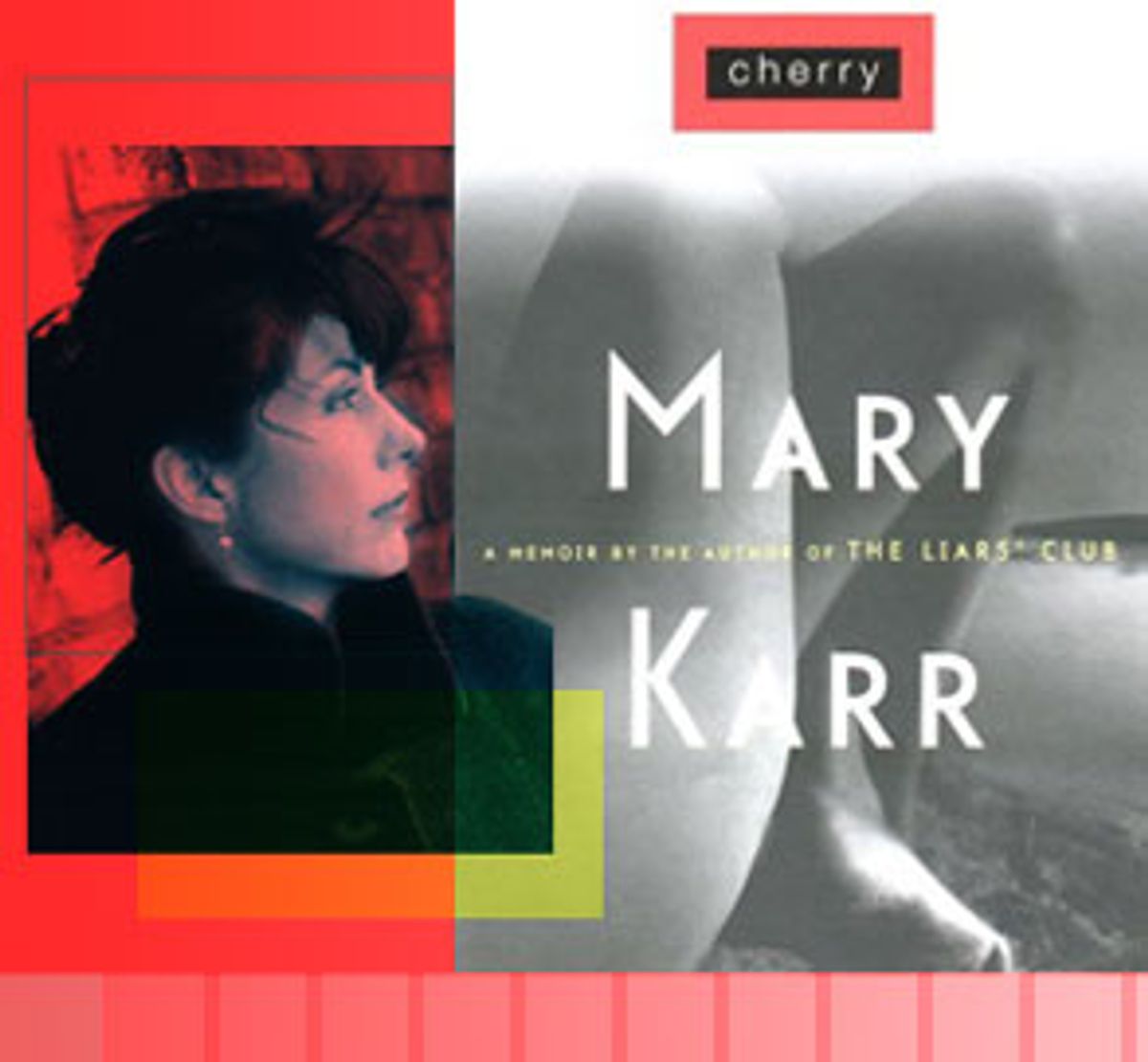 We've now all endured the official Memoir Boom and the official Memoir Backlash. During the backlash, we bemoaned the glut of true confessionals on every possible setback and infirmity -- memoirs from the blind, the deaf and the lame, the obese and the anorexic, the celibate and the nymphomaniac. We mocked the self-aggrandizement and exhibitionism that the genre encourages, and wondered whether most of the authors' lives deserved such documentation. We observed that past memoirists had tended to serve as witnesses to cataclysmic events (Harriet Jacob's "Incidents in the Life of a Slave Girl" or Primo Levi's "Survival at Auschwitz"), whereas our age seemed to have nothing more momentous to offer than coming-of-age ditties by suburban youth whose greatest achievement was having watched reruns of "My Favorite Martian" every day after school.

Through these waves of critical reaction, the memoir has settled into a comfortable publishing niche. Not terribly surprising -- nonfiction has always sold better than fiction. So now the fresh writing program graduate is more likely to pen an earnest piece of "creative nonfiction" than an ironic roman-`-clef. And midlist writers hoping to revivify their careers consider weighing in with the requisite reminiscence. This is not necessarily a bad trend, even if the books are marketed less for their literary value than for their appeal to very specialized clientele. If you have lost a fortune to gambling or a child to a drunken driver, have found God or been hit by lightning, there's a memoir for you, and no doubt it'll come up on your personalized Amazon.com recommendation page.

It's always unfair to hold writers responsible for their P.R. -- unless they believe the hype themselves. So we must begin by forgiving Mary Karr. Her new memoir, "Cherry," is being shilled as a tale of sexual awakening -- not a bad idea for the trash-talking and succulent-simile'd Karr, but not actually what she wrote. "Cherry" is a fairly standard '70s coming-of-age tale, with more drugs and rock 'n' roll than sex. If you come to the book hoping to part the tightly folded legs on its cover, you will be disappointed.

The flap copy on "Cherry" further credits Karr's bestselling memoir, "The Liar's Club," with having "enough literary verve to spark a renaissance in memoir writing." As Mary Karr herself would say, don't believe that for a Yankee minute. Or: Say that again and I'll tear you a new asshole. So for the record, let us note that Karr by no means discovered this vein but is digging in a well-known mine. Nevertheless, just because she didn't invent the diamond doesn't mean hers isn't shiny.

Let us pause, however, to give credit where credit is due. The grand dames of American creative nonfiction (in Europe, personal essays never went so totally out of favor) are Joan Didion and Annie Dillard, who in the '70s created highly stylized, almost mythical personae for themselves. Memoir's godfathers are the Wolff boys. Geoffrey Wolff's 1979 memoir, "The Duke of Deception: Memories of My Father," was structured very much like a conventional biography -- except it told his own tale of life with a colorful, enigmatic father after his parents' divorce. His little brother, Tobias Wolff, told his side of the story, about life with mother, in the 1989 "This Boy's Life." The junior Wolff's innovation was to use a more fictional structure and voice, so that his tale, though true, was as zippy, tight and metaphorically coherent as his own short stories.

Not coincidentally, Tobias Wolff was Karr's colleague at Syracuse University and acknowledged as a mentor in "The Liar's Club." Karr learned his lessons well. She shares with Wolff not only a gift for lingering on a resonant image, but for talking about hardship without a trace of self-pity. It's Karr's tender-toughness that distinguished "The Liar's Club," her account of her ugly childhood in Leechfield, Texas. Crazy, deserting and alcoholic parents, illness, poverty, sexual assaults by babysitters: Nothing got Little Mary down. "People who whined about their childhoods were woosies," Karr wrote. Perhaps because the town was "teeming with chemical and genetic mutations," the people of Leechfield, Karr claims in "Cherry," "tolerated affliction with more grace than most places I've lived," and even gave wide berth to delinquents: "In every Texan's mind there sleeps some genetically wired pathway that makes running afoul of the law okay."

By high school, Karr herself would have her own run-ins with authority. "Cherry" covers Karr's progress from the beginning of seventh grade until the day she leaves Leechfield for California in 1972 with a vanload of stoned cohorts, "embracing the skittery surface of surfing and psychedelia." Even in the mosquito-infested backwaters of Leechfield, Karr manages to push every hot button of her generation, from free love and war protests to Plath-like suicide attempts.

Karr describes the slide from childhood into adolescence with dead-on accuracy and deadpan humor. "I took undue interest," she recalls, "in the occasional chameleon that slithered from the tangle of honeysuckle through the vents of the air conditioner in my room. Once I spent a whole morning at the bathroom mirror trying to get one such unfortunate lizard to serve as a dangly earring by biting my earlobe. (If you squeezed his soft neck just right, his mouth would open like a clasp.) But he'd only bite down for a second or so before his jaw opened and he fell down on my shirt front or into the sink and I'd have to catch him again. His tail finally broke off, and our Siamese -- then hugely pregnant -- wolfed him down her gullet in two quick swallows."

Speaking of the movement of mouths, Karr does as good a job in detailing her first kisses with a freckled boy named John Cleary. "Suddenly I know so much. I understand about waves and cross tides and how jellyfish float and why rivers empty themselves in the Gulf. I understand the undulating movement of the stingray on 'Sea Hunt' and the hard forward muscle of the shark. Now I know why they call it petting, for even though I'm more still in the plush warmth of his mouth than I can ever get in church, my whole body is purring. I let my self breathe into him a breath that tastes like ashes from a long fire."

"Cherry" bustles with writing that fine -- passages so lively and precise you don't stop to demand why you're reading an entire memoir, written largely in second person, about your adolescence in Leechfield. The problem with Karr's adolescence is precisely that it's so much like yours, or mine, or anyone else's. The slumber parties, the spin-the-bottle, the hostile eighth-grade guidance counselors -- it's all pretty much regulation, right down to the carload of tripping white teens bravely venturing to hear good blues at the seedy club.

Perhaps what was most interesting about that period is how fully it leveled socioeconomic differences. The crest of teens who came of age when Karr did could believe, correctly, that their backgrounds didn't matter. In 1972, Karr could shed Leechfield. Although the memoir is ostensibly about the extent to which her past shaped her, Karr generally just describes her numb confusion during the period, eschewing adult reflection. And that's a shame. Often, reading "Cherry," readers may wonder how Karr feels now -- as a sane and successful woman, as a mother or college professor, as someone who presumably unlike her teenage incarnation does not fake her orgasms -- about the inchoate self that she was.

For instance, a reader can easily believe that Karr did not know what to make, at the age of 15, of her mother hauling her off to an OB-GYN for a supply of birth control pills. "Your mother holds loudly forth on any and all pussy-related subjects, with nothing falling too far off limits. You'll be sitting at the kitchen bar wolfing down cereal, and she'll say out of the blue, Do you know what a blow job is, honey? Or: I hope you feel comfortable touching yourself down there. It makes you want to bury your head under a pillow for the remainder of any meal." But how does Karr feel about this in retrospect? Is she proud? Appalled? Both?

Karr suggests that she came of age in a period when definitions of womanhood were in transition. Certainly Karr's mother, with her seven marriages, artistic aspirations and scorn for convention, was an atypical role model. Despite the birth control pills and her fervent bathroom reading of Henry Miller, Karr accepted the oldfangled dictum that "pussy is a high-ticket item right up until and during the night you relinquish it. Then it becomes a commodity and you along with it -- with no more value-added than frozen OJ or pork belly." But again, her memoir offers no clear argument about how Karr managed to permute into the self she prophesied in her diary at age 11 -- "a real woman, a hardworking woman with a pure soul. Not just a perfumed woman on the outside." Because the adult woman has so little voice here, the account of her sexual coming-of-age feels vague and truncated.

Karr's decision to cleave only to what she felt at the time is a quite conscious one. "We tend to overlay grown-up wisdoms across the blanker selves that the young actually proffer," she says. But to tell us she was clueless as a youth is to tell us not quite enough about either herself or her time, however vivid her memories.

Indeed, many readers may question the veracity of memories quite this specific. Can Karr really recall these huge chunks of dialogue? Does she really remember how, on a given day in eighth grade,

Mother wanders out with the New York Times crossword, her reading glasses balanced on the end of her nose.

"Monarch?" Lecia [Karr's sister] says. With her rat-tail brush, she sections off a parcel of hair on her crown and slaps some more Dep on it before wrapping the ends around a brush roller.

Passages like that are, of course, the downside of novelizing your life. Obviously Karr is re-creating rather than reproducing the scene. It must also be noted that prodigious recall is an essential skill for the autobiographer. Take a look at Vladimir Nabokov's "Speak Memory", in which he claims to remember not only every last detail of playing, at age 4, under a couch in long-abandoned Russia, "a big cretonne-covered divan, white with black trefoils, in one of the drawing rooms at Vyra," but also what color he associated with each letter of the alphabet as he learned to write.

To talk about your own exploits in this kind of detail will always make you a target of some suspicion and bitterness. ("Jeez, how much more does that woman have to say about her life?" a writer friend e-mailed me.) The commodification of pussy is nothing next to the commercialization of an autobiographical persona. Think of aw-shucksy Garrison Keillor, or Annie Lamott's cheerfully "kooky" spiritual ramblings. Especially with a book as successful as "The Liar's Club," Karr risks turning into a narcissistic self-parody: the sassy straight-shooter unafraid to speak of the forbidden. She risks turning, in fact, into her own flamboyant mother.

But those accusations would be unfair in regard to "Cherry." Karr convinces us that the impulse to self-revelation served -- and serves -- a real purpose for her. "Kids in distressed families," she says, "are great repositories of silence and carry in their bodies whole arctic wastelands of words not to be uttered, stories not to be told." What saved Karr was writing itself -- the promise of reaching truth on the page. Karr was a poet first, and despite the weaknesses of this memoir, every page evinces a poet's luxuriant respect for language, "each letter forged into a gleaming shield."

Lisa Zeidner's last novel was "Layover." She is a professor of English at Rutgers University in Camden, N.J.