The perils of anti-capitalism

At a San Francisco art exhibit, trashing the new dot-com economy is harder than it should be. 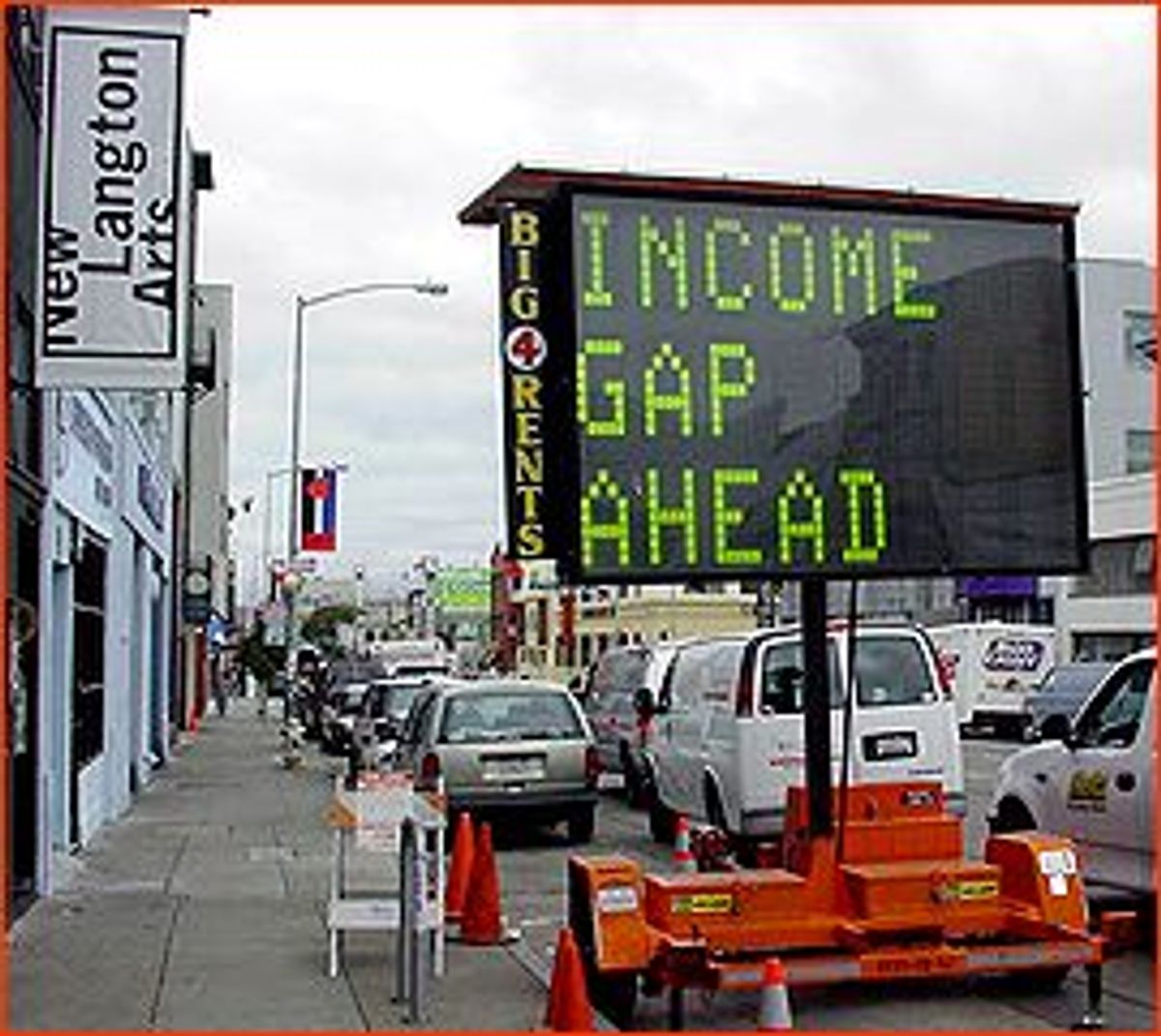 At first glance, the just-opened "Consumer to Capitalist" exhibit at San Francisco's New Langton Arts Gallery delivers on its promise to showcase "a cutting critique of the culture and effects of advanced capitalism." Eleven artists, employing videos, Internet art, etchings, posters and a road sign that greets visitors entering the building with the exhortation "We can defeat capitalism together!" slam everything from Microsoft to Nike to IKEA.

But behind the scenes, there's a back story to the show that demonstrates just how difficult it is to fight the taint of new-economy capitalism, even when you are doing your darndest to rebel against it.

As with so many dot-com disputes, a domain name -- NewLangtonArts.com -- rests at the heart of the matter. You might think that the gallery, a San Francisco mainstay for 25 years, would own it. But no: "We only had the dot-org," says Susan Miller, the gallery's executive director.

So, when the artists' collective South to the Future acquired the dot-com domain name and then came to Miller with its own plan for incorporating it into the "Consumer to Capitalist" (C2C) exhibit, Miller didn't quite know what to think. South to the Future wanted to use the domain name to help create an "online community that would bring together dot-commers and artists," says Becky Bond, a member of the 5-year-old San Francisco troupe. The growing divide between San Francisco Bay Area artists and dot-com entrepreneurs is becoming an increasingly volatile cultural flashpoint; Bond says the plan was to heal the rift by "creating a marketplace where good deeds were rewarded."

Specifically, visitors to the exhibit would be required to set up an online account -- little more than a user ID and a password, that would make them members of the NewLangtonArts community. By registering they would gain "points" which they could then distribute to other members of the community to reward good deeds. "It could be a rally for the homeless, another art exhibit, whatever the community decides," says Bond.

Miller says she liked the idea at first. She is, after all, an outspoken supporter of Proposition L, an anti-growth proposal that seeks to solve the city's accelerating dot-com gentrification problem by severely limiting both the number of tech companies that can set up shop in specific regions of San Francisco and the size of the office buildings that those companies can construct.

But Miller soon had second thoughts. After approving South to the Future's installation, Miller threatened to renege on the deal if the collective didn't sign away their rights to the domain. She sent the group what she calls "a simple contract." Among its requirements: Every page of South to the Future's NewLangtonArts.com Web site had to contain disclaimers about who owned the New Langton Arts trademark; the contract limited use of the domain to about two months; and it also claimed ownership of the domain while prohibiting use of it for anything "promoting or advancing the business of newlangtonarts.com."

Why would a nonprofit gallery that's sponsoring an anti-corporate show be so obsessed with a domain name it hadn't even bothered to grab in the first place? "They're [South to the Future] forming a business here [with our name]," Miller explains. "We simply wanted to protect our stake in it."

Plus, she added, "we have a history here, our name has value."

Bond laughs at the explanation. "The gallery just didn't get it," Bond says. "It's just an art exhibit."

Nonetheless, South to the Future largely complied, with a smile. For Bond and the rest of the collective, the ironic contradiction implicit in the domain name dispute only served to highlight the anti-capitalist C2C exhibit's ultimate point: "There is no distinction between art and commerce."