Anyone who doesn't think there is any difference between Bush and Gore, just think about the Supreme Court. 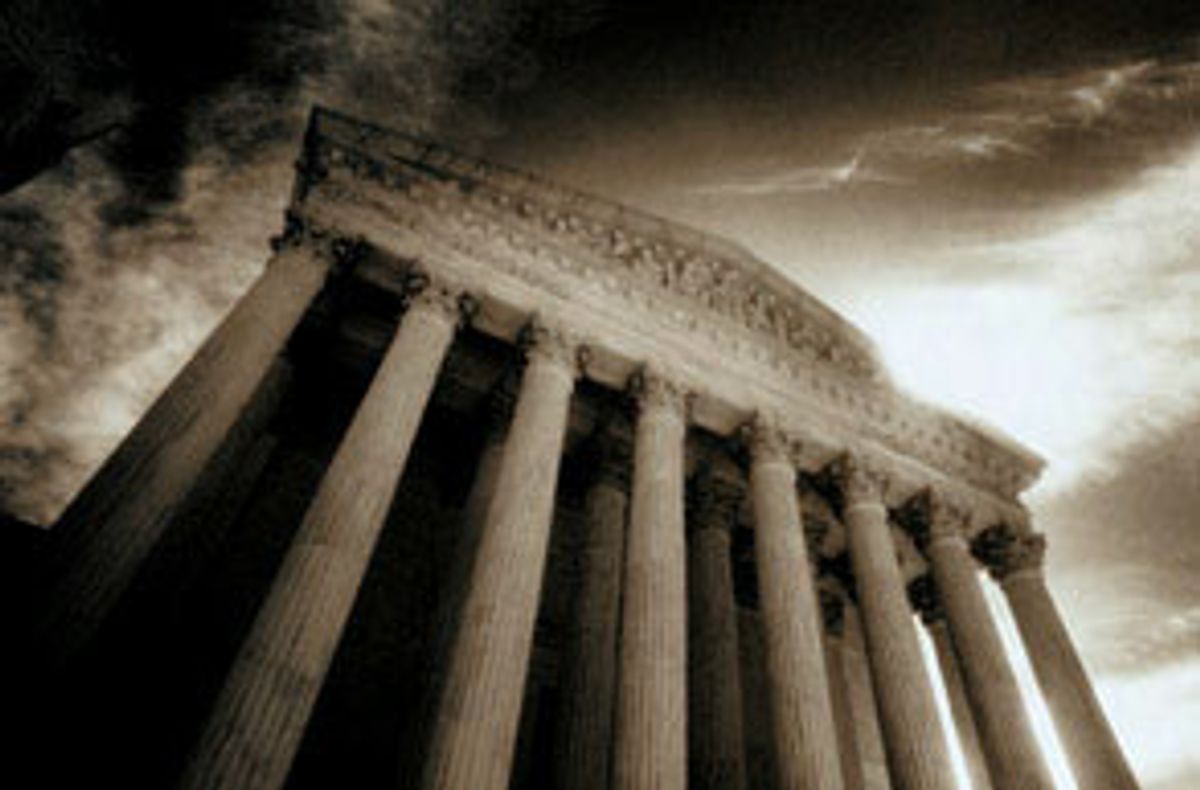 Like a lot of people, I am heading into the final weeks of the presidential campaign thinking hard about Ralph Nader. The dreary weeklong infomercials packaged as Republican and Democratic conventions, the posturing and pandering over nonissues like the debate schedule and the entertainment industry, are constant reminders that only Nader, and his persistent challenge to global corporations, comes anywhere near my own sense of what politics should stand for.

Since midsummer, Nader's partisans have been working overtime to persuade us that this nagging voice is just a Democratic tout. It has become a sort of orthodoxy to dismiss fears about the Supreme Court and the threat of an anti-choice majority as a quadrennial scare tactic to keep voters in line. "Roe v. Wade was written by a Republican, and upheld for 27 years by Republicans," Michael Moore reassures voters on his Web site. "The Supreme Court gets dragged out every four years to squash any attempt to escape the Democratic Party," writes Barbara Ehrenreich in the Nation, where my friend Christopher Hitchens argues the same case: "It is as possible, in theory as well as practice, to imagine Gore making a safe and stupid reactionary appointment as it is to picture Bush making an 'unpredictable' centrist one."

These writers and other friends are all clamoring for a no-regrets Nader vote by pointing to the less-than-predictable biographies of justices past. Irrefutable: Roe vs. Wade was written by Richard Nixon-appointed Justice Harry Blackmun; Ronald Reagan-appointed Justice Sandra Day O'Connor is pro-choice; the Supreme Court nominees of Republican presidents have sometimes turned into civil libertarian heroes, among them Blackmun, the great Justice William Brennan and Chief Justice Earl Warren. As for Democrats, John F. Kennedy's first appointment, Byron White, turned out to be a liberal's nightmare -- opposing abortion rights, affirmative action and the Miranda ruling, supporting aid to parochial schools and upholding anti-gay sodomy statutes.

All true, as far as it goes, but I fear that is not very far. This reading of Supreme Court history ignores recent, uncomfortable facts. Since 1980 -- a legal generation longer than Warren's famously liberal tenure as chief justice -- Republican Supreme Court nominees have been anything but "unpredictable." Of seven Supreme Court justices confirmed under Presidents Ronald Reagan and George Bush, just one -- David Souter -- has systematically disappointed the right.

In fact, the political history of Supreme Court appointments neatly divides with Reagan's election in 1980. Prior to Reagan, presidents named justices for all sorts of reasons, with friendship, the settling of old debts and the elimination of prospective political rivals all as likely to figure in a nomination as ideology. One of Reagan's most significant achievements was to abandon that tradition of wink-and-nod nominations, to recognize the political potential in the Supreme Court as explicit patronage for his party's most conservative factions. For Reagan, Supreme Court seats were raw meat thrown to the religious right, anti-regulatory free-marketers and law-and-order extremists. In return for such powerful gains, right-wingers were happy to ignore Reagan's massive escalation of the national debt.

President Bush, advised by a Cabinet including Dick Cheney, cheerfully sustained Reagan's strategy. In fact, Bush's appointments were even more politicized than Reagan's. Replacing retiring African-American civil rights champion Justice Thurgood Marshall with inexperienced, ultraconservative African-American Clarence Thomas ranks as the most cynically calculating Supreme Court nomination of all time. And Souter, you'll recall, was named by Bush in the explicit hope of undoing Brennan's civil-libertarian legacy upon Brennan's retirement. That Souter instead became the lone holdout against the William Rehnquist faction's rightward tilt was simply White House miscalculation. Bush had hoped to name a star of the conservative bar, but progressives had, a few years earlier, effectively campaigned against the far-right Robert Bork. To avoid another fight Bush turned to the unknown Souter, a friend of his chief of staff from New Hampshire. It's a mistake that won't be made twice: The religious right has already begun a "No More Souters" campaign to make sure.

What about that reaffirmation of abortion rights by the Reagan-Bush court? True, in 1992 justices O'Connor and Anthony Kennedy joined Souter to secure "the central holding" of Roe vs. Wade, in Planned Parenthood of Pennsylvania vs. Casey. But Kennedy this year turned his back on his Casey colleagues to support Colorado's ban on late-term abortion -- joining ranks with Rehnquist, Thomas and Antonin Scalia, who all believe, as Thomas wrote, that Roe vs. Wade is this century's equivalent of the Dred Scott decision to uphold slavery. With three bitter anti-choice justices, one waverer and as many as three Supreme Court seats likely to open in the next term, the future of reproductive rights can hardly be called a marginal issue.

Anyway, the political meaning of the Supreme Court in this election year can't be reduced to Roe vs. Wade. African-Americans, for instance, have good reason to take very seriously the makeup of the whole federal court system in coming years, from the Supreme Court on down. Blacks have suffered massive losses of political power at the hands of O'Connor, the author of key decisions undercutting the Justice Department's voting rights enforcement, and eliminating black-majority congressional districts throughout the South. The narrow Rehnquist majority's campaign to reshape federalism is already damaging civil rights laws. This spring, the court threw out key provisions of the Violence Against Women Act and found states immune from age discrimination suits.

That same attack on federal enforcement power will sooner or later subvert all sorts of corporate regulation and environmental protection laws -- the very brakes on globalized capital sought by Nader.

Then there is the candidate himself. Anyone who expects moderate appointments from President Dubya -- especially on the terrain of reproductive rights -- is ignoring the Bush family biography. Begin with George W.'s grandfather, Sen. Prescott Bush of Connecticut. Prescott was a Republican population-control man, the biggest congressional ally Planned Parenthood ever had. As a young congressman in the late '60s, George Bush followed in Prescott's footsteps -- and the Republican right hated him for it.

So as Reagan's vice president, Bush (like Reagan before him) remade himself a right-to-lifer with a vengeance. Ever since, the Bushes have been running from their family-planning legacy, time after time bending over backward to prove their anti-abortion credentials to a still-skeptical right. George I's nomination of Clarence Thomas was one such gesture, George II's signature on Texas anti-abortion laws another. The choice of that tired right-wing courtier and fanatic pro-lifer Dick Cheney for V.P. ought to be a signal of George W.'s attention to symbolic patronage. Does anyone seriously think that for his Supreme Court appointments, Bush would turn his back on a constituency his whole family has so assiduously courted?

And who are the most likely candidates for elevation to the Supremes in Bush II? The relatively moderate record of Bush's state court appointments in Texas has been seized upon by some as evidence of Dubya's centrist pragmatism. But the penny-ante patronage of state judgeships is utterly irrelevant to the sweeping Republican project to remake the federal courts from top to bottom -- a campaign that shows no signs of abating, as the Senate's delay of Clinton-nominated federal judges demonstrates over and over again. The lower federal benches remain crowded with Reagan-Bush judges, many named for their anti-civil-rights, anti-choice, pro-business credentials.

Let's have no illusions about Al Gore's and Joe Lieberman's personal fealty to the Bill of Rights. Gore was part of an administration that has done more than any in American history to remove legal protections for death-row prisoners and has granted the FBI and prosecutors vast new surveillance authority. Now Gore and Lieberman think it's good politics to blur the church-state line and to regulate the marketing of popular culture.

But elections are as much as anything about patronage -- in this case, the crucial question of which constituencies the next president will try to satisfy with judgeships and Supreme Court nominations.

One reason Nader's campaign has so little traction among African-Americans, for instance, is that communities that lack other political leverage know they desperately need federal courts and Supreme Court justices friendly to the civil rights tradition. With one-third of young black men in some cities caught up in the increasingly expansive criminal-justice net, and minorities disproportionately represented among the 2 million Americans in prison, who sits on the federal bench shapes the course of thousands of lives in a fearsomely literal way.

And many ordinary voters understand something Nader's partisans haven't yet found a way to address: It is the Supreme Court justices and lower federal judges, not the president or Congress, who set the outer parameters for much of day-to-day life, from schooling to work to business to sex. Are those voters' fears really so inconsequential?

It bothers me that some of Nader's most thoughtful partisans -- and Nader himself -- won't acknowledge the burden the future of the Supreme Court and the whole federal court system imposes on civil libertarians and civil rights advocates. This isn't about sentimental liberalism: There's a dynamic between Supreme Court decisions and grass-roots social change worth pondering a year after the World Trade Organization protests in Seattle. When the Supreme Court further erodes the rights of women, minorities and unions, it doesn't make vigorous protest more likely -- it puts all those constituencies on the defensive, making creative, forward-looking events like Seattle less likely.

And not only did great civil rights judicial victories like Brown vs. Board of Education or Roe vs. Wade reflect long legal and political campaigns going into court but each, in turn, unleashed aspirations and political passions that still resonate.

The Nader camp's cavalier dismissal of the Supreme Court as an issue this election year also reflects an attempt to marginalize reproductive rights and sexual politics, to view issues like abortion and gay rights as second-tier concerns for an economic-populist reform coalition. If that's the strategy, it's a bad one. Reproductive autonomy and sexual privacy are high on the list of issues that engage an otherwise alienated public across all sorts of class and ethnic lines -- as the public's overwhelming support of President Clinton during the Lewinsky scandal, long after he was written off in Washington, suggests.

Still, there are compelling claims of conscience for a Nader vote, and he has introduced the only ideas worth discussing in the entire campaign. Nader's exclusion from the presidential debates is cowardly and a symptom of the sickness of American politics; the personal attacks on his character and motives by Gore surrogates like former Rep. Toby Moffett -- a one-time Nader acolyte and environmentalist turned chemical conglomerate executive -- discredit only the attackers. For Nader's Green Party to gain 5 percent of the presidential vote and federal matching funds would be an invigorating exercise in electoral boat rocking. But is it any less radical to suggest that the undeniable satisfactions of this exercise need to be weighed, far more soberly than Nader's boosters suggest, against the prospects for the Supreme Court and federal judiciary? I am not now, and never have been, a Democratic surrogate. But I am not going to let this be an easy, reflexive decision either.