Early election returns in Yugoslavia show the opposition with a forceful lead, but will the indestructible Milosevic wriggle out of defeat? 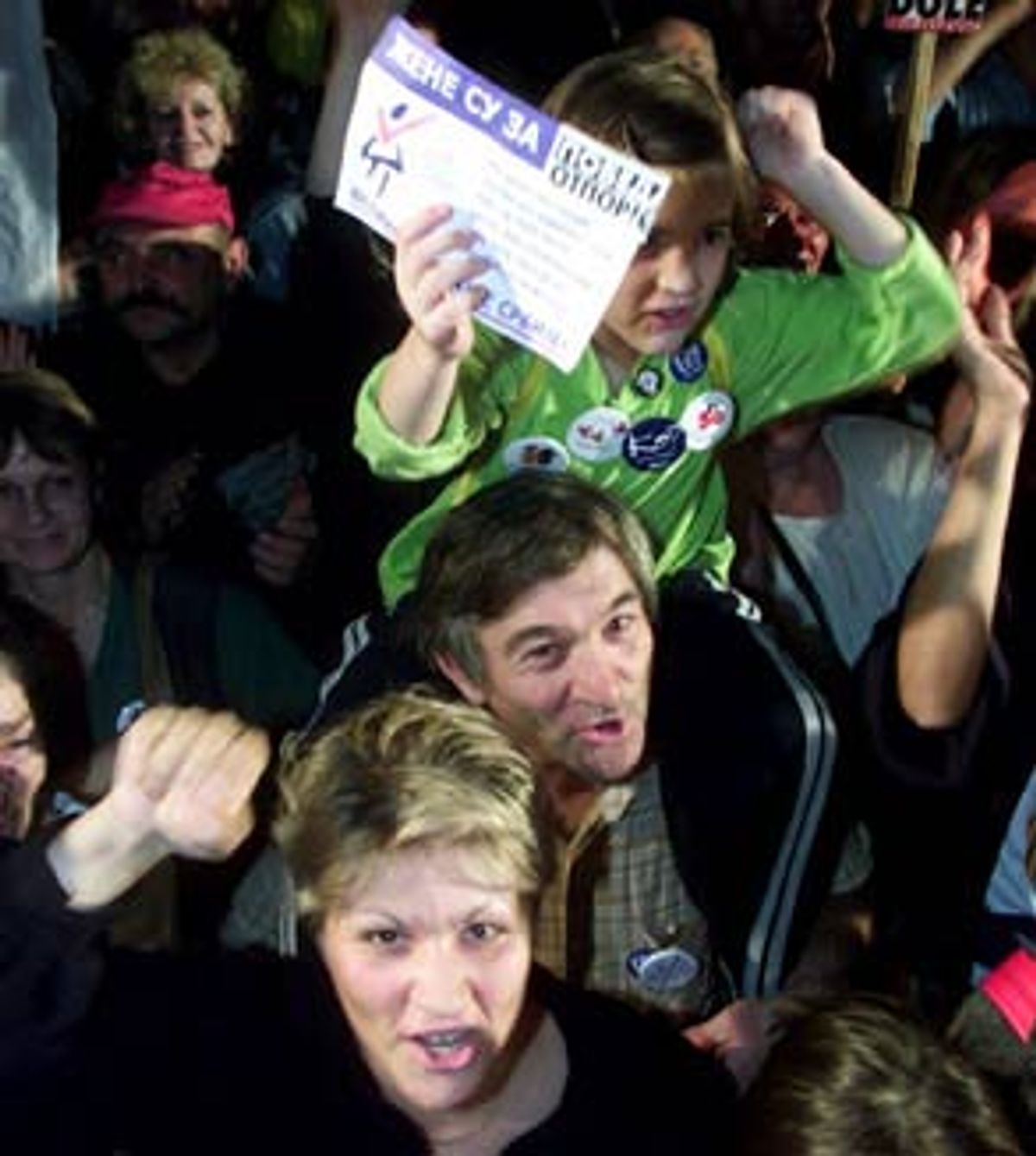 Many Serbs anticipate that the day of reckoning has only been postponed, as Milosevic and the hundreds of officials who have a stake in his continued power strategize what to do next.

Opposition activists, young people and independent reporters celebrated Kostunica's strong showing with street parties outside the headquarters of the united opposition in downtown Belgrade. But officials with Milosevic's Socialist Party of Serbia (SPS) also declared victory, albeit a slight one, for Milosevic, who has held power in Yugoslavia since 1987. The stakes are high for Milosevic, who has been indicted for war crimes by a United Nations tribunal along with four other top Yugoslav officials.

Under Yugoslavia's Constitution, if no candidate receives more than 50 percent of the total votes cast, a runoff election is to be held within 15 days. Regional analysts had widely predicted before Sunday's election that Milosevic would do everything in his power to declare a first-round victory. What he will do now remains an ominous question.

Independent poll monitors complained that the elections were plagued from start to finish by wide-scale voting irregularities, intimidation and ballot stuffing designed to benefit the regime.

But shockingly, such tactics may not have been enough. Early Monday the regime's confidence appeared to be unraveling as election returns showed the opposition's victory to be so decisive that it would be difficult, even with widespread cheating, for Milosevic to declare a first-round victory.

Belgrade analyst Bratislav Grubacic described evidence of deep confusion within the Milosevic camp, with the head of the army and the state-run Politika newspaper summoned to Milosevic's villa at 2 a.m. for an all-night huddle. In addition, independent Belgrade Radio Index reported that regime-controlled Radio TV Serbia had broadcast a televised statement showing Kostunica in the lead before hastily withdrawing it. Grubacic suggested that the opposition's victory was so decisive that Milosevic may be forced to go to a second round, and thereby postpone his defeat.

"It is already now definitely clear that the Democratic Opposition of Serbia has won the Yugoslav elections at all the levels," Grubacic wrote in Belgrade news wire VIP News Monday. "Milosevic and his loyalists do not have many options left. Milosevic will perhaps continue to go for a victory in the first round of the elections, but some people in the SPS believe that Milosevic should accept something that seemed impossible until Sunday -- to run in the second round of the presidential elections. It is still not certain whether the left-wing coalition will be able to carry out an electoral theft in order for Milosevic to win."

Opposition activists say they are thrilled with the early returns that show that their candidate may actually clinch a first-round victory.

"We're celebrating," said Vanja Cuk, a university student who was partying Sunday night at the Independent Media Center in Belgrade. "There's 10,000 opposition supporters on the street outside partying. But if Milosevic declares a second round, I am going to dye my hair black" as a sign of mourning, she said.

Many fear the prospect of clashes between opposition supporters and the government in the days to come, should the regime and the opposition disagree over the election's results.

As a portent of what could come, special anti-terrorist police forces dressed in helmets and riot gear formed a cordon in downtown Belgrade early Sunday evening. They separated a few hundred Milosevic supporters who had gathered for a victory concert from thousands of opposition supporters. The Milosevic regime's supporters dispersed after the concert without incident as opposition supporters stayed on the streets and at the opposition headquarters to watch the early-morning returns.

With votes at just under half of the polling stations counted, representatives of the 18 opposition parties united in the Democratic Opposition of Serbia said their candidate, Kostunica, a constitutional law professor, was leading with 57 percent against Milosevic's 33 percent. However, earlier Sunday evening Nikola Sainovic, a spokesman for Milosevic's SPS, said returns from just 300 out of a total of 10,000 polling stations showed Milosevic narrowly ahead, with 50.28 percent to Kostunica's 30.76 percent.

What's surprising is that the regime didn't immediately claim a much higher victory. It had gone to great lengths to indicate it was prepared to take all measures to ensure a first-round victory -- from expelling foreign reporters to printing ballots with Milosevic's name already checked.

Despite their overnight celebrating, opposition activists say they fully expect the regime to count the votes the way it chooses.

"There is an absolute mess in Serbia today," Marko Blagojevic, director of the nonpartisan Center for Free Elections and Democracy (known by its Serbian acronym, CESID), told CNN Sunday. "I don't think elections like this were ever held anywhere, ever since the Stone Age."

According to CESID, the regime's vote-stealing techniques included banning opposition monitors from observing polling stations in several Serbian towns, allowing citizens in some pro-regime towns to vote without documentation or proof of registration, organizing polling in private homes and shops in the smaller Yugoslav republic of Montenegro, erasing known opposition supporters from voter lists in key towns and forcing tens of thousands of Serbian voters to show their marked ballots to regime-appointed poll monitors before they stuffed them in the box.

The fear of reprisals against those who vote against Milosevic is high in Yugoslavia. Many people still depend on the state for humanitarian aid, factory jobs and government-issued housing. Employees of several state organizations, such as the Serbian post-telecom company, say they were told ahead of time by their bosses to vote for Milosevic if they wanted to keep their jobs.

But even with their awareness that the regime had pulled out all the stops to try to get the election to turn out in its favor, opposition activists were excited by the results and the high voter turnout. It is estimated that between 70 and 75 percent of Serbia's 7.5 million eligible voters cast ballots for president and for Yugoslavia's two houses of Parliament and Serbian local elections.

Montenegro, which has a pro-Western government, and the Albanian majority in the U.N.-administered southern Serbian province of Kosovo both boycotted the voting. Nevertheless, pro-Belgrade Montenegrins and Kosovo's Serbian minority participated, together accounting for only about 90,000 votes.

"It seems Serbia has passed a turning point," said Zarko Korac, an opposition political leader whose party was one of the 18 to back Kostunica's candidacy.

Opposition activists say there are indications that regime officials were privately panicking at signs the opposition victory was bigger than they had expected.

"Privately, [regime spokesman Nikola] Sainovic said, 'We lost,'" said opposition activist Miroslav Hristodolos, by telephone from Democratic Opposition of Serbia headquarters early Monday. "The regime knows that they lost on all levels. This is breaking news."

Some opposition leaders feel their victory is too decisive for the regime to ignore. But a former U.S. government official with a Balkans portfolio says Milosevic may not have too much difficulty staying in power. "Milosevic probably went to bed at 11 p.m.," the official said. "He doesn't have to do very much."

Indeed, the regime-controlled Federal Elections Commission had kicked out opposition and independent monitors from the places where the FEC was counting votes. It was clear that the group was under orders to arrive at a vote count that would show Milosevic with a convincing lead.

Yet opposition activists believe that officials close to the regime understand that Milosevic's defeat -- despite his claim of victory -- could fuel a process of delegitimizing him before his power structures, namely his political party, the police and the army. Opposition activists say that convincing the police and army that Milosevic has no legitimate claim on power could be crucial to prevent a Tiananmen Square-like scenario in which the leader would call on the police and army to attack crowds of Serbs protesting his claims of victory.

"It's a death by a thousand cuts," opposition leader Korac said in a recent interview, referring to the process of removing Milosevic from power.

"There is no doubt that we overwhelmingly won on all levels," opposition leader Zoran Djindjic said Sunday night. "Milosevic has to seriously understand the judgment of history, and he shouldn't gamble any longer."