Vedder on Nader: The better man

Inspired by the WTO riots, the Pearl Jam frontman promotes the Green Party candidate's presidential bid at a Seattle rally. 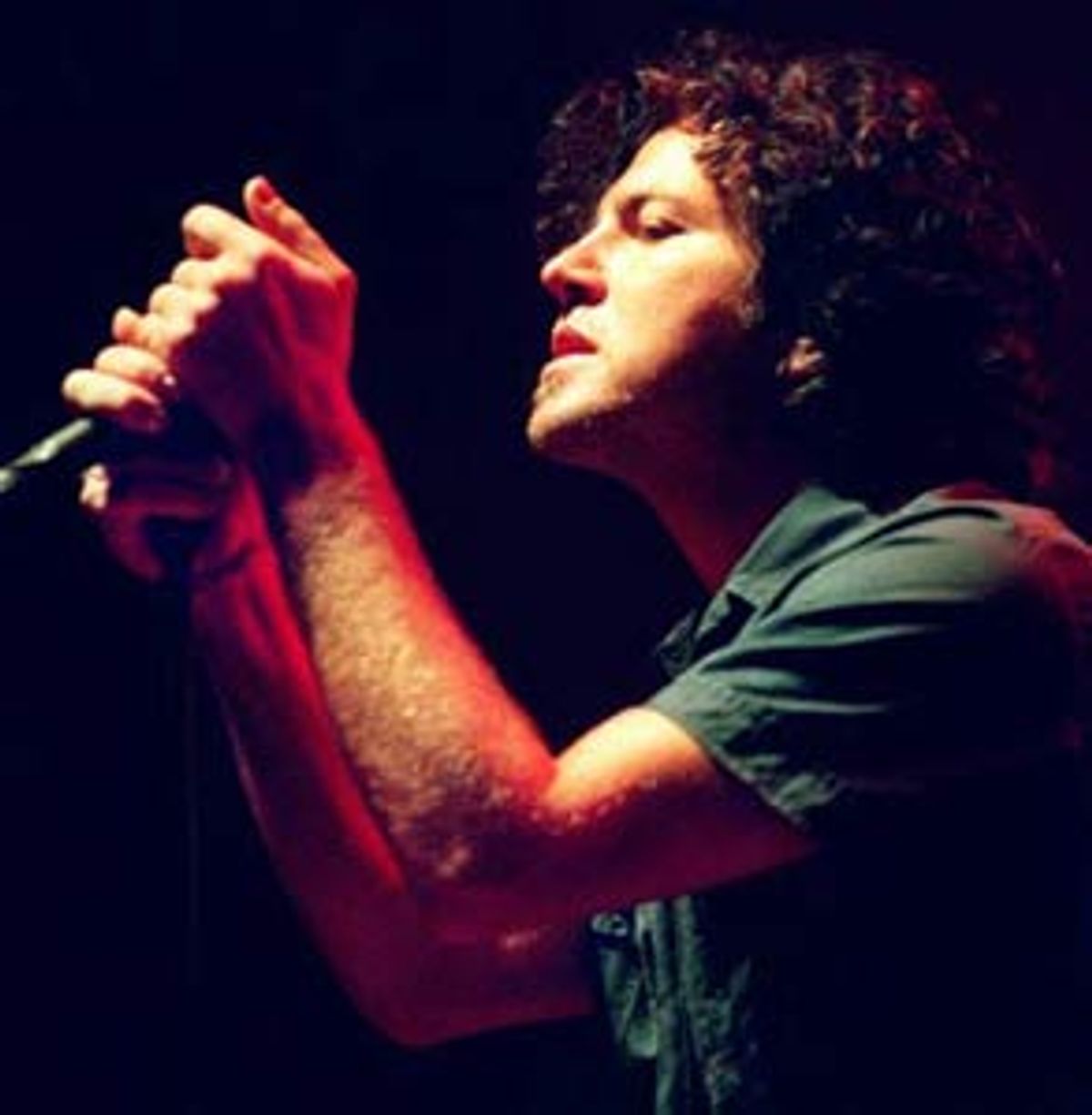 Vedder's decision to actively support Nader's campaign comes as a surprise to many of Pearl Jam's fans. In a July interview in George, Vedder and his band mates said that lending political sponsorship to a candidate was an inappropriate activity for a rock band. Vedder, in particular, worried that endorsing one candidate might alienate fans.

But judging by his appearance Saturday at the city's Key Arena, Vedder has apparently decided that his enthusiasm for the Nader campaign's themes of anti-corporate greed and grass-roots democracy outweighs such concerns.

Nader 2000 announced yesterday that Vedder had been drafted by the Citizens Committee, a group of 100 leaders from different fields who support Nader and are calling for him to be included in the upcoming presidential debates with Al Gore and George W. Bush.

Still, Vedder's willingness to step into a more prominent role in the Nader campaign clearly caught the estimated 10,000 audience members at the gathering by surprise.

"I've never been to one of these [rallies]," mumbled Vedder bashfully when he first appeared onstage after a rousing, witty speech by Texas populist and radio talk show host Jim Hightower. "The reason was [that] I never had anyone I could believe in before."

The bearded Vedder, with chin-length hair framing his still-boyish face, launched into a tender version of "Soon Forget," from Pearl Jam's latest album, "Binaural." He called out facetiously to find out whether Microsoft co-founder and area billionaire Paul Allen was in the audience, and then dedicated the song -- about the isolation and loneliness that accompany excessive wealth -- to Allen and Bill Gates. In between songs, Vedder remarked that the people he had watched pouring into the arena earlier in the evening represented a broad diversity of backgrounds and appearances, and yet all appeared to have one thing in common. "People had this certain look: They looked like people who give a shit," he said.

Vedder picked up a guitar for a stirring acoustic performance of Steven Van Zandt's "Patriot."

After receiving a standing ovation, Vedder brought Nader to the stage, introducing him as "someone who represents us and not the corporate interests."

Nader and his running mate, Winona LaDuke, have spent several weeks touring the country. Events in Minneapolis and Portland, Ore., drew 12,000 and 10,500 paying attendees, respectively, but the ticket's support is thin and dropping nationwide.

According to recent polls, Nader's support among voters in Washington is running at 5 percent. Besides young activists, two local unions, the Seattle local of the American Postal Workers Union and Local 174 of the International Brotherhood of Teamsters, recently announced that they had broken with their national leadership to endorse Nader.

Their numbers aren't significant nationally, but reflect the role Nader has played in calling attention to growing income disparities in the nation, as well as to the more problematic aspects of the North American Free Trade Agreement and the World Trade Organization.

Public Citizen, a Washington, D.C., public interest group that Nader helped start, played a significant role in organizing many of the demonstrations and alternative conferences that took place during the week of the WTO summit here in late November and early December 1999. Nader himself was on hand to speak at several events and participate in the demonstrations.

The Nader rally on Saturday night was clearly tuned in to the impact that those demonstrations had on the region's young activists. Early in the rally, large video monitors showed footage of the locally produced documentary "This Is What Democracy Looks Like," which sets images of police using pepper spray and tear gas on WTO protesters against commentary by Spearhead's Michael Franti and music by Rage Against the Machine.

Pearl Jam, who were in their hometown studio recording "Binaural" when these events unfolded, have previously said that they were deeply affected by the sheer size of the daily protests, which brought some 50,000 protesters to the city streets.

The group began its three-month, 40-city tour in August. Early on, Vedder and his band mates installed voter-registration tables at each venue. Pearl Jam will conclude their tour with two nights of shows at Key Arena in early November, with proceeds going to a wide array of local nonprofit organizations and activist groups.

Already, Pearl Jam have donated more than $2 million to a spectrum of national and international causes, and they have also recently established a charitable foundation that aspires to give away roughly half a million dollars to progressive causes every two years. "We're extremely pleased by the support offered by Eddie Vedder," said Nader 2000 spokesperson Stacy Malkan. "We really feel that his support shows that we appeal to the leadership of a younger generation who are disillusioned by the two major parties."

Silja J.A. Talvi is a freelance journalist and essayist. She received a 2005 PASS award for her feature on the impact of "three strikes" sentencing in Washington state and is an 11-time winner of regional awards from the Society of Professional Journalists. She is working on a book about women in prison.