The GOP presidential nominee trashes the Clinton-Gore education record at a parochial school in Los Angeles. 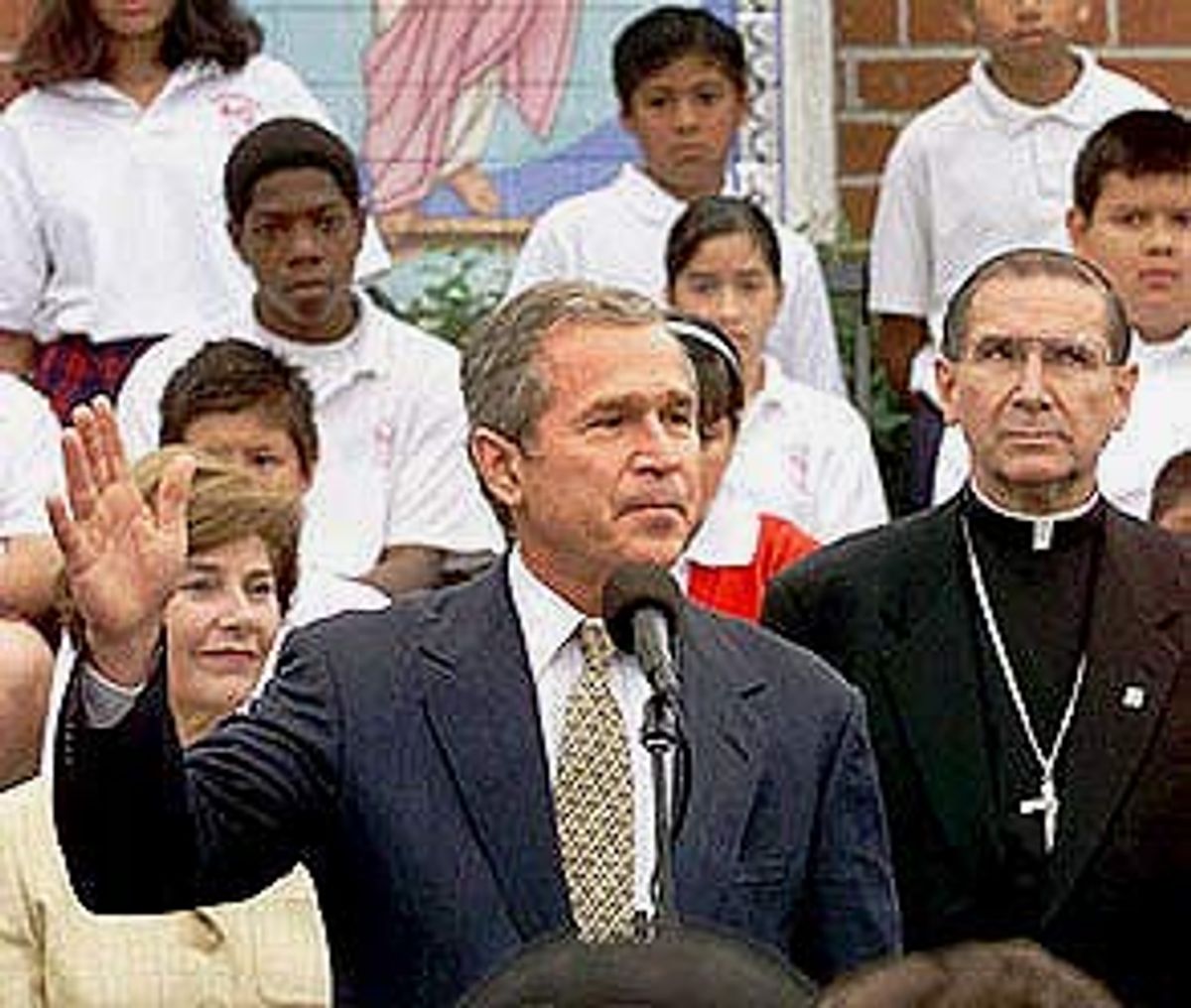 On day three of his week dedicated to "Ending America's Education Recession," Gov. George W. Bush went into one of the few private schools in poverty-stricken Watts to talk about school safety.

"Es un gran honor de estar aqui contigo sus maestros y padres de los niqos que estudian este," Bush said to teachers, students and the faculty of Ascension Elementary School, a parochial school that is 99 percent Latino, after he was introduced by Cardinal Roger Mahony, the Archbishop of Los Angeles. "Thank you for having me, and thank you for having my wife, mi esposa."

Bush serenely heralded "the discipline of the Catholic school system around America. The fact that the standards are high and the expectations are high and there's a zero tolerance program for dis-rup-shun." Saying that zero tolerance was key, and "ought to be the same for public schools as well," Bush said that Texas has created alternative schools for unruly kids.

Sounding every bit like a federal principal, Bush said that zero-tolerance programs create a better learning environment, "so that if a child comes into the classroom and persistently disrupts, the teacher's got the ability to be able to say, 'Well, I'm sorry, you can't coexist peacefully with your classmates, you're going to go over here.'"

The speech was one in a week packed with events where Bush is pillorying the Clinton-Gore administration for the fact that reading scores have "declined or stagnated," and the "achievement gap" between white and minority students has increased among high school seniors. Texas has seen improved performance in its scores, and Bush has been able to eat away at the general impression among voters that Democrats are better on the issue than Republicans. Bush has sold himself as someone for whom education is his "passion," despite the fact that Vice President Al Gore's education proposal would allot almost 10 times as much federal funding as would Bush's.

But regardless of Bush's lengthy list of charges against Gore on this issue -- which include a January quote from Rep. George Miller, D-Calif., slamming Gore for not doing "enough to address our nation's education needs" -- across the street, Bush was the one being assailed. Two dozen protesters stood outside the local public school, Figueroa Street Elementary, and sneered at the location of the governor's event.

"He comes to South Central and he goes to a private school and he wants my vote?" screeched Dee Ruff, 48.

Ruff, who said she has a son in fifth grade as well as a granddaughter in first grade, held a sign that read, "Bob Jones + Bush - So happy together."

Bush called Ascension Elementary "a beacon of hope," a "center of excellence," "a little haven of love," and a "little place of hope." The school was chosen for the Wednesday campaign stop specifically because it works in conjunction with Figueroa Street Elementary, on school safety -- a partnership that Bush heralded as an example of why there should more local control of schools.

"I believe the best schools are those that are free from rules and regulations and bureaucracies, rules that sometimes thwart the goodwill and good hearts of teachers." Bush said that as president, he would create "an environment of freedom so collaborations such as this can coexist without fear of somebody saying, 'This isn't the way it's supposed to be.'"

Bush went on to propose more of what critics will no doubt slam as an even further blurring of the line between church and state, suggesting that faith-based after-school programs receive greater federal funding. His education proposal says "that if we're going to have an after-school program, it's OK -- it's more than OK, it is ad-VIS-able -- to invite people of faith and goodwill and good heart into helping children understand that somebody cares and somebody loves them."

Despite the theme of the week, Bush once again proved a bit more articulate in Spanish than in his native tongue. Of schools that shine in tough circumstances, Bush said, "One of the common denominators I have found is that expectations rise above that which is expected." Participles were dangled, other parts of speech were reported missing.

Bush called for more tort reform, saying, "There needs to be Teacher Protection Act," which would shield schools from being sued under federal civil rights statutes.

Before speaking to the crowd, Bush, his wife and Mahony entered a fourth-grade classroom, where Bush asked the students a question that he later recounted in his address.

"How many of you are going to go to college?" he asked.

"Every little hand popped up," Bush reported. "That's the spirit of America."