The new biography glosses over the defiant, troubled life of the eerily prescient author of "Animal Farm" and "Nineteen Eighty-Four." 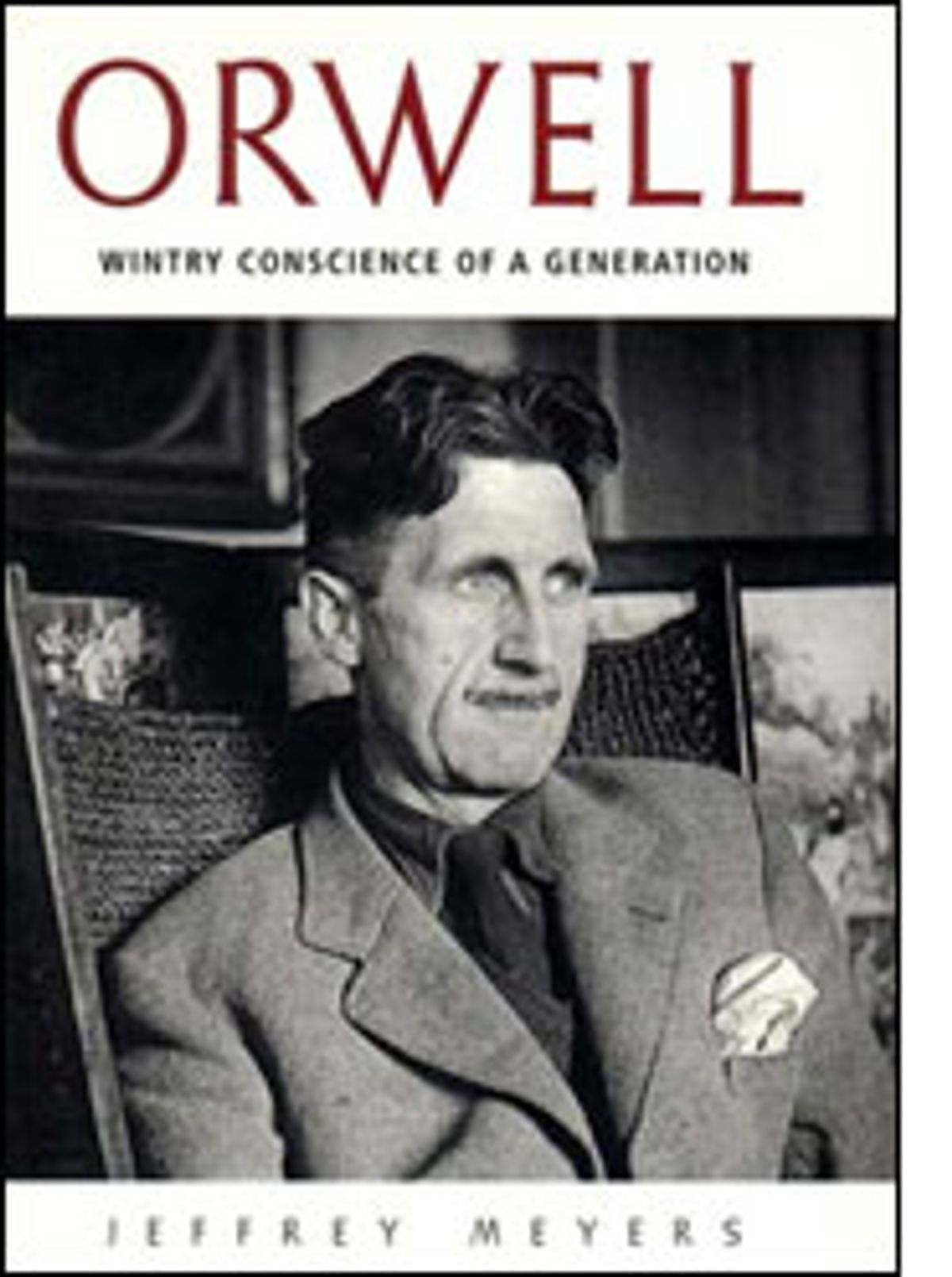 For anyone who doubts that literary biography is a questionable art, its enduring value falling somewhere between memoirs of the Clinton administration and novelizations of films by Miramax, I offer the following passage from "experienced" biographer Jeffrey Meyers' latest exercise in middlebrow edutainment, "Orwell: Wintry Conscience of a Generation":

Eric [George Orwell's real first name] became uncommonly tall and gangly, with a shock of dark, stiff hair. But he began life, like most infants, pudgy and almost bald. In a contemporary photograph, the bonny baby, with a quiff of wavy hair, is dressed in a long white gown and lacy collar. Ida [Orwell's mother] holds him toward the camera but, clenching his fist, he looks shyly away.

In the space of four sentences we have learned exactly nothing, save that the "gangly" adult who wrote the political novels "Animal Farm" and "Nineteen Eighty-Four," as well as remarkable works of journalism like "The Road to Wigan Pier" and "Homage to Catalonia," was once an infant whose parents dressed him up for family photographs. This is the biographical method in a nutshell: Describe the subject's physical characteristics with the haste and immediacy of bad fiction; state the obvious ("he began life, like most infants, pudgy and almost bald"); throw in some documentary evidence, in this case a photograph; hope this constitutes a narrative. How strange and unfair that George Orwell -- the man young Eric Blair became in order to avoid implicating his family with the politics of "Down and Out in Paris and London," an impassioned account of his years as a tramp and part-time dishwasher -- has inspired a biography that might have been extruded from a mechanical "kaleidoscope" (see "Nineteen Eighty-Four") instead of written by a human being.

Orwell was a child of the waning British Empire (his father, often absent, was a petty official in the Indian government agency that regulated the sale of opium to China) who rebelled against the indoctrination of his youth with a rare constancy. As Meyers would have it, Orwell assuaged his colonial "guilt" by seeking abject poverty and agitating for a socialist democracy in England. But liberal guilt is only half the story: Orwell's life is a monument to rash and self-incriminating choices, from joining the police force in Burma after graduating from Eton (Orwell was a brilliant if lazy student) to immersing himself in the world of tramps and idlers during the "Down and Out" years to endangering his life and fragile health (Orwell suffered from tuberculosis) by joining the POUM militia, a Marxist splinter group, to fight Gen. Francisco Franco's fascists in Spain.

While other foreigners there, like Ernest Hemingway and Andri Malraux, soaked up the limelight in "the more glamorous units," Orwell found himself embroiled in Communist Party bickering, in charge of a 12-man company on the Aragon front with scant training, little ammunition and no objective other than to keep from shooting one another by mistake. Orwell would later describe his predicament this way in "Homage to Catalonia": "In the draughty evil-smelling barn of the farm-house where we were billeted, in the stuffy blackness of dug-outs, behind the parapet in the freezing midnight hours, the conflicting party lines were debated over and over."

Georges Kopp, the commanding officer of the POUM, put it best when he informed his troops: "This is not a war, it is a comic opera with an occasional death."

But just as Orwell never fully gave up on the ideals of the British Empire -- honor, duty, sacrifice -- he continued to believe in political ideology as an agent of progressive change, even as he combined with Arthur Koestler, author of "Darkness at Noon," in a kind of anti-Stalin tag team to eradicate the left-wing intellectual romance with Soviet communism. It might be hard to imagine now, but when Orwell finished writing "Animal Farm" in February 1944, Stalin was still an ally of England and America, and very few publishers were willing to risk offending the Kremlin. (T.S. Eliot of Faber & Faber wrote in his rejection letter, "We have no conviction ... that this is the right point of view from which to criticise the political situation at the present time.") The novel's immediate success, however, particularly in America, would free up Orwell financially to leave his dreary flat in London (his wife, Eileen, had recently passed away, leaving him to raise their adopted son, Richard) and move to the remote island of Jura, off the Scottish coast, to begin work on what he expected to be his masterwork, "Nineteen Eighty-Four."

Hands up if you've read this novel since high school -- and extra credit if you remember the 1984 film starring John Hurt (a quaint early version of Internet age "synergy"). Meyers commits the cardinal sin of English teachers by reading the political message of "Nineteen Eighty-Four" as purely anti-communist and failing to see Orwell's "ironic reversal" of Utopian fiction in its full complexity. Having worked for the BBC writing propaganda during World War II, Orwell had firsthand experience in the use and abuse of language for "just" ends ("All power," he wrote in his journal during the war, "is in the hand of paranoiacs"), and his novel is eerily prescient about the numbing effects of global capitalism.

Especially poignant to the reader of today is Orwell's anxiety about the fate of literature in Oceania ("Books were just a commodity that had to be produced, like jam or bootlaces"), or the replacement of local currency -- pounds and farthings -- by dollars and cents, or the proles' enslavement to the national lottery, not to mention the ubiquity of surveillance equipment. The ever-chipper Meyers complains that "Nineteen Eighty-Four" "lacks a positive vision" and sees this as a defect. A more attuned reader will appreciate Orwell's pessimism, and may even wonder whether a world with one ideology (profits bring prosperity) is truly superior to the "comic opera" of ideologies in competition.

As critic Lionel Trilling observed, Orwell embodies the "virtue of not being a genius, of fronting the world with nothing more than one's simple, direct, undeceived intelligence." We have a surplus of geniuses in the literary world at the moment and a shortage of enlightened working stiffs -- writers who are willing, like Orwell, to do the prole's work of unveiling intellectual dishonesty and untangling the truth from corporate doublethink. One wishes that Jeffrey Meyers had been able to honor Orwell's scrupulous life with more than a perfunctory rehash of inherited wisdom.