I love writing about sex, but don't believe in telling kids things they aren't ready to handle. 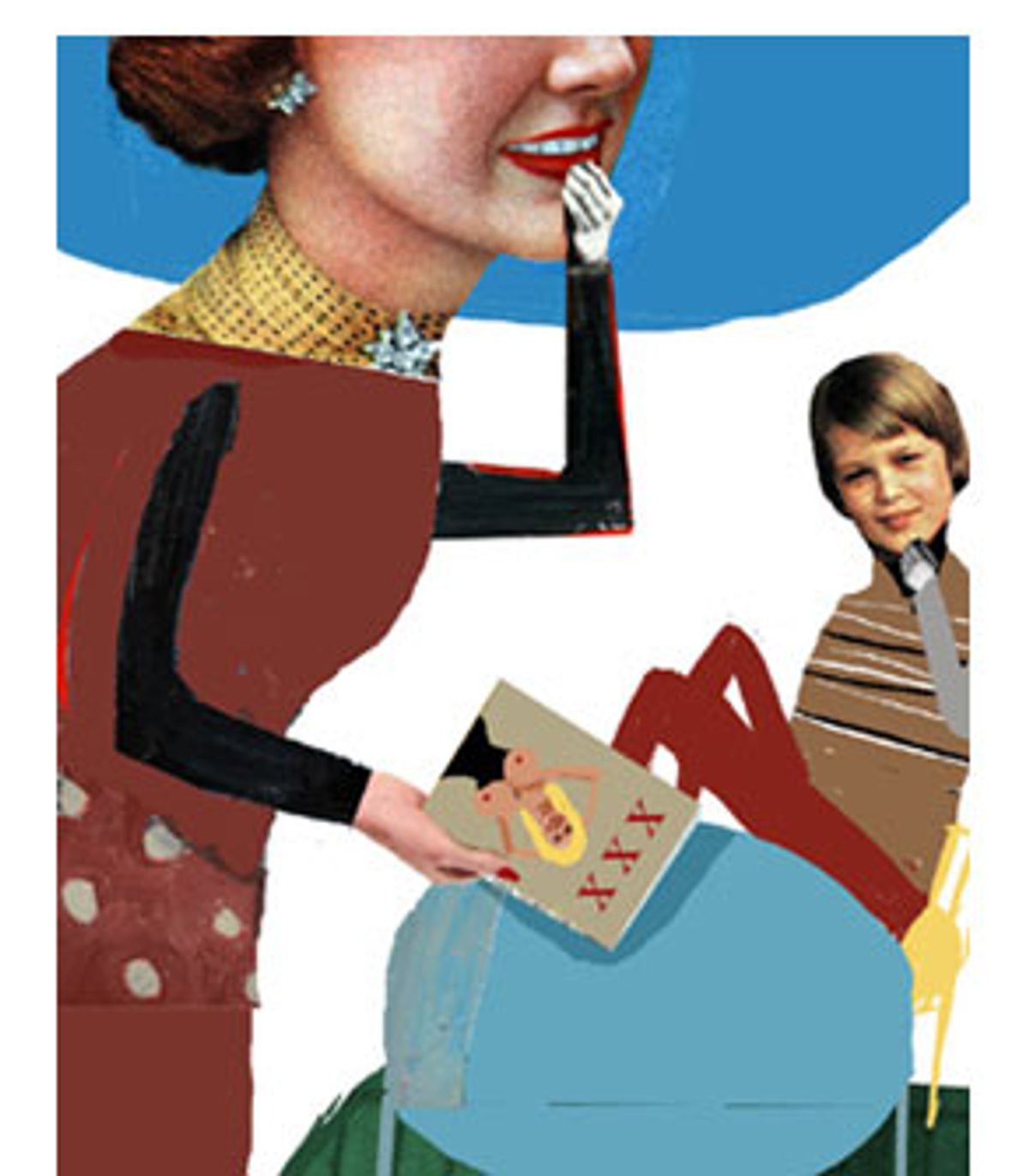 The first time my 12-year-old son asked me if I would buy him a Playboy magazine, I offered him one from my stash. "I just happen to have a copy," I said casually, sneaking in my closet to get it for him. I was glad that he felt free to ask me, but I had to offer my standard grown-up-woman/feminist lecture. "The articles are good," I said, as if I really thought he was going to read them, "but you must realize that real women simply don't look like those pictures. Those girls are airbrushed to perfection, and most of them have fake breasts."

The generation gap widened. In his age of Jenny McCarthy/Pamela Anderson/perfect MTV babes, puffed-up beach balls on women's chests look normal to him. I mumbled a few words, trying to describe the difference. Fortunately he did not ask me to sort out the naturals from the pretenders, and to my relief he took the magazine to the privacy of his bedroom.

As a writer of erotica and a woman who grew up in sexual ignorance, I don't believe in censorship for children. But I also don't believe in tossing smut at them before they're ready, either in print or on the Web. So I have no problem with Playboy being kept out of view in convenience stores, or with erotic Web sites having adult-warning pages. Kid-filtering software is a little iffier to me; it seems like a good idea, but too many parents I know who have this in place are the more clueless ones who need better communication and more time with their kids -- kids who then have to hang out at other people's houses to learn things.

Like my house. Six months after the Playboy incident, my son was sitting in his bedroom with a couple of friends, sharing dirty magazines, while I was around the corner, out of sight, putting laundry away. "We should close the door so your mom won't catch us," one guilty-sounding kid said while ogling the centerfold.

"Oh, it's no big deal," my son responded, with a matter-of-fact confidence that concerned me. "My mother reads Penthouse."

I didn't stick around for the response, slinking away to reconsider my parenting skills for a moment. I am a soccer mom and a PTA parent, but I also read and write smut with a serious passion. No matter how liberal and open I think I am, there's still a fine line to walk as a parent. I believe in the idea that when kids are ready to know something, it should be made available to them, in a smart and honest way. It's just hard to keep hiding my own stuff.

But their grandma does. Yes, in this multigenerational smut family, even my mother has gotten in on the act. This conservative woman in her 70s, who had never even looked at a Penthouse in her life, has suddenly developed a great interest in my writing. The first story that I tentatively showed her in a magazine earned only the comment "Wow, that's almost ... pornographic!" But within the year she was reviewing all my stories for me, providing helpful insight on characters and questioning factual sexual information: "Do people actually do that?"

Of course she has to hide the stuff from my father.

I made my collection of erotic books and magazines available to my two sons not long after the Playboy incident, pointing out the shelves where I kept them in case they wanted to read them, and gave each of them the gift of "Changing Bodies, Changing Lives: A Book for Teens on Sex and Relationships," the best book around about sexuality for teenagers. Actually, I made everything available except one book, which I hid: "Macho Sluts" by Pat Califia. I can't remember why, and today it's on the shelf with the rest, but I think at the time that I read it I was shocked by it (and loved it), and somehow thought this one book might be too much for my kids.

Not that they ever read these books. They're teenage boys -- they want pictures, music, action. I'd like to think my kids are growing up reading Henry Miller, Susie Bright, Pauline Reage and Robert Olen Butler, but it hasn't happened yet. I have pointed them to Web sites like Scarleteen and Go Ask Alice, and I know they've passed the information along to friends, so perhaps some interesting sexual words are being absorbed in spite of everything.

There are problems with complete honesty with kids. Noted conversations from the front: "Mom, would it be OK with you if I have some friends over after school on Friday and we make hash brownies?" Answer: "Uh, no." And another: "You know, boys, I believe that everyone is born bisexual. Whether you grow up to love women or men or both, it will be OK by me." Answer: "Oh, yuck, Mom."

Still, the erotic-disclosure conflict remains for me. My son's "Details" magazine subscription arrived earlier this year, and as I was flipping through it before he'd seen it, there it was -- an excerpt from my story in "The Best American Erotica 2000" -- in my kid's magazine. I debated: He'd probably never notice it if I didn't show him, and, yes, it included X-rated writing. But I'm human, and my name was in his magazine, so I showed him. I think he blushed a little bit after he read it, but still, every parent knows you've got to impress your kids with your coolness when you get the rare opportunity.

My oldest son is 16 now and hardly even looks at magazines like Playboy, preferring to spend his time reading about snowboarding and music. Is this healthy? Was it healthier, not to mention sexier, to grow up repressed, as I did, shocked into eroticism every time I got a sneak peek at something dirty? I lived through that and ended up as an adult who sees the world through a sexual haze, never tiring of writing out all of my wildest fantasies. My mother grew up in a repressed era and ended up as a senior citizen who gets a secret kick out of erotic stories. Will my kids be jaded by things sexual before they're 21, or will all of this openness mean less agony and healthier relationships for their futures? Only time will tell, but I hope for the latter. In the meantime, though, I look forward to the possibility of their acquiring their own brand of grown-up outrageousness, and hearing them say to their own teenagers someday about me, "Your grandmother writes smut."

Susannah Indigo is a freelance writer.