The International Monetary Fund and the World Bank hold their annual meeting in the Czech Republic -- a country that exemplifies growing European inequality. 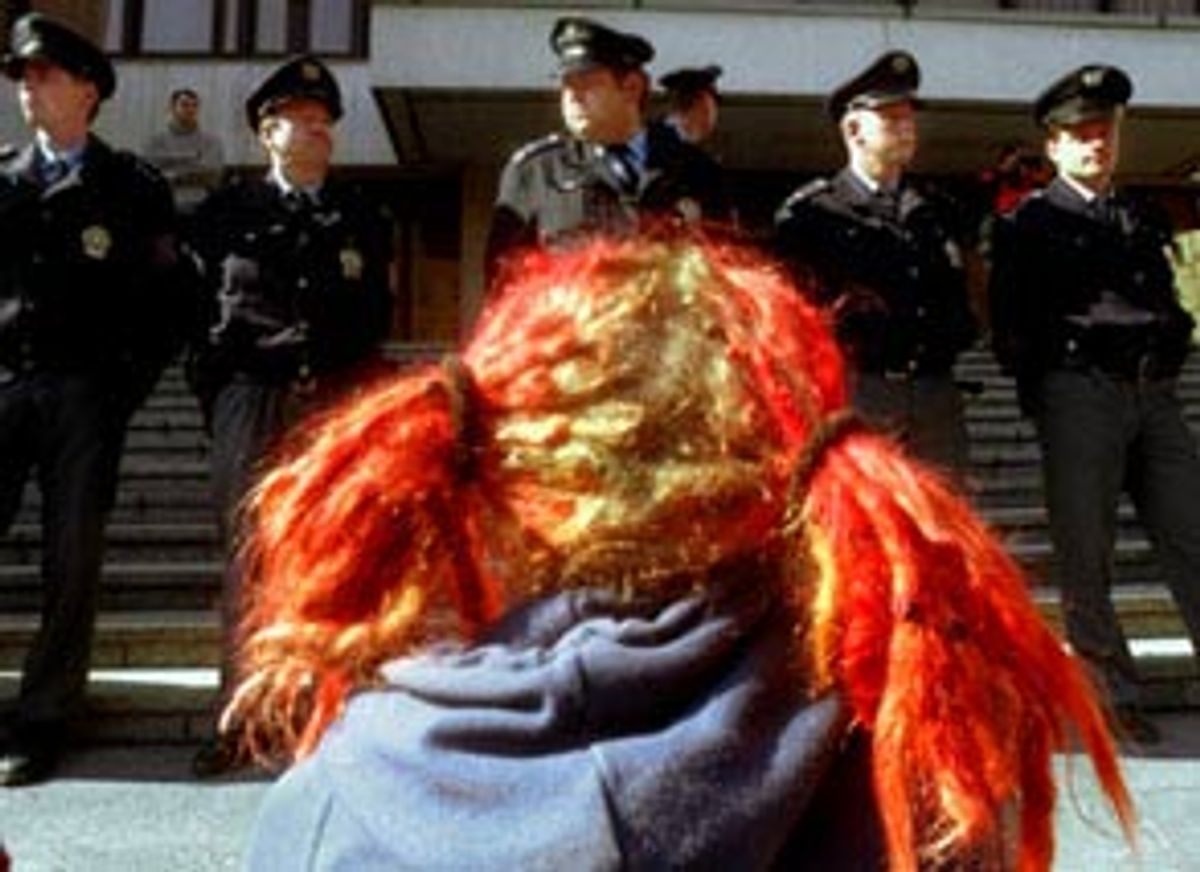 It is a sign of the times that the Czech Republic, whose international luster still owes much to those two pinnacles of civil disobedience -- the Prague Spring of 1968 and the Velvet Revolution of 1989 -- dealt with this week's impending global finance protests by turning back at the border hundreds of would-be demonstrators with arrest records from Seattle and from anti-globalization protests that have bird-dogged finance meetings in Washington, D.C.; Davos, Switzerland; Melbourne, Australia; and Okinawa, Japan.

Demonstrators came anyway, and on Tuesday about 10,000 of them defied Czech police lines to try to march on the Congress Center, a dreary communist-era conference hall, where delegates to the joint annual meeting of the World Bank and the International Monetary Fund arrived in special sealed subway cars. When Czech police blocked demonstrators from a bridge leading to the hall, small groups of masked anarchists broke off and tried to storm the hall from other directions, launching hours of street action that sometimes pitted police water cannons against rock throwers and Molotov cocktails.

Scarcely a corner in Prague is without the most resonant historic symbols. The old part of the city, practically alone among Continental capitals, escaped bombing by either side in World War II; from Hradcrany Castle, the seat of the Czech Republic's government, medieval rooftops cascade down the hill to the Vltava River and Charles Bridge. The cacophony of Czech jazz and rock, cellphones and beepers, resounds through the same 12th century alleyways that have echoed with the footfalls of Christian dissenter Jan Hus, Nazi governor Reinhard Heydrich and playwright turned president Vaclav Havel.

With Havel now chair of the IMF-World Bank meeting, the symbolism of this week's Prague protest (actually only one of 27 demonstrations against the IMF and World Bank occurring worldwide) may well turn out to be just as enduring as past protests. For one thing, Prague is not just any European city. The Czech Republic was an early, aggressive laboratory for a radical shift to deregulated markets after the downfall of the Soviet Union -- precisely the formula pressed on developing countries by the two world financial institutions. Recovering from a downturn three years ago, Prague is crawling with foreign investment, Benetton is perched on Wenceslas Square and the nation is on the verge of membership in the European Union.

Yet beneath the dazzling surface, the country that's hosting the IMF and World Bank is also a distinct symbol for everything that's wrong with corporate globalization. For one thing, the Czech economic miracle happened only because the country literally ditched its poor, separating from neighboring Slovakia in 1993. Secession was widely portrayed in the West as a victory for Slovak nationalism, but Czech politicians were just as anxious to be rid of the economic burden of a population widely viewed as ignorant peasants by Prague's cosmopolites. I remember attending a reception in Prague not long after the Velvet Revolution and listening with astonishment as the new President Havel presented a long, jeering narrative about a complaining letter he had received from an old woman in a Slovak dairy.

The respective fates of the Czech Republic and Slovakia seven years after their separation are symbolic of the growing inequality taking root even on the Social Democratic soil of Europe. In Slovakia, unemployment runs at 20 percent -- twice the level of its neighbor. Inflation there is 14 percent, compared with 2.5 percent in the Czech Republic.

Yet Slovakia is a raging success story compared with many of the other transitional countries of Central and Eastern Europe. According to a little-noted report released by the World Bank just one week before the Prague conference, "there is little doubt that poverty has increased dramatically" in the former Eastern bloc since it entered the global system. "Moreover, the increase in poverty is much larger and more persistent than many would have expected at the start of this process."

It is the Eastern European version of a worldwide phenomenon. As Jeremy Brecher and Brendan Smith note in a new book, "Globalization From Below," 89 countries are worse off than they were 10 years ago. In Africa, where per capita income grew by 34.3 percent from 1960 to 1980, per capita income subsequently fell by about 20 percent from 1980 to 1997. At the same time, they point out, the world's 200 richest people have doubled their wealth in the past four years.

In Prague, finance ministers made their most emphatic noises yet of sympathy with the protesters' core concerns. "I am aware of the critical debate about globalization, and many questions raised have to be of concern to all of us," said Hoerst Kohler, the IMF's new managing director. James Wolfenson, president of the World Bank, said he believes that many protesters "are asking legitimate questions." Czech President Havel, also meeting co-chairman, went so far as to convene a debate on the global economy between environmental/human rights organizations and world financial leaders such as George Soros.

Yet if the persistence of protest in the past year has moved the IMF and World Bank toward recognizing the economic inequality fostered by corporate globalization, officials still seem bewildered at the roots of what is clearly transnational discontent with the status quo. "If the IMF did not exist already, this would be the time to invent it," Kohler said. "I understand what [protesters] are against, but I am not sure what they are for," said meeting co-chairman Trevor Manuel, finance minister of South Africa.

What Kohler and Manuel are missing is that growing economic inequity, the erosion of living standards for a large part of the world's people, is only half of what alarms the anti-globalization movement worldwide. The other half is the erosion of democracy -- the way countries in deep debt to the IMF and World Bank are simply denied the capacity to establish their own economic rules.

The fruit of this "banker knows best" policy is nowhere more vivid than in the former Eastern bloc nations within a few hours' drive of Prague. The World Bank's own report documents the fallout from the kinds of free-market nostrums the Bank and the IMF have spent years imposing on developing economies. In 1998, the Bank reports, one out of every five people in the former Eastern bloc lived in poverty -- surviving on $2.15 per day -- compared with just one in 25 a decade ago. And this is no temporary condition: About 80 percent of those at the bottom of the economic equation in Poland, Hungary and Russia are likely to remain there. "It appears an underclass is forming," the Bank warns. Suicides of young males in the region have increased by 50 percent, even in the relatively prosperous Czech Republic; healthcare and school enrollment are declining.

While the poverty of the former Eastern bloc is horrifying, Western Europe too is contending with its own localized revolts. Even while Britain's chancellor of the exchequer joined other finance ministers in Prague, for instance, he was fending off rising pressure within his own Labour Party over growing poverty among the U.K.'s elderly; indeed, he was compelled, from Prague, to promise restive Labour an increase in state pensions. Britain, France, Spain and Ireland were all paralyzed in recent weeks by truckers' strikes aimed at lowering taxes on petroleum -- a populist revolt (in an ironic coincidence of interests backed by oil companies) springing from a sense of declining living standards amid economic growth, as Tony Blair belatedly acknowledged this week.

If nothing else, this week's protest in Prague makes it clear that a year after the demonstrations in Seattle, the fight against corporate globalization really is a worldwide phenomenon: Finance ministers have been unable to meet anywhere without having to wade through protestors in the streets.

Waldon Bello, executive director of Focus on the Global South and a leading critic of the IMF and World Bank, believes that the fact that the IMF and World Bank ministers encounter protests everywhere "speaks volumes about the tattered legitimacy of the two institutions." And, he believes, "when legitimacy has vanished and is not regained, it is only a matter of time before the structure collapses, no matter how seemingly solid it is." It is not only globalization critics like Bello who believe the free marketers are on the defensive. "The anti-globalization forces are now in the ascendancy," said economist C. Fred Bergsten of the Institute of International Economics in Washington in a speech earlier this year.

Bello believes that the demonstrations in Prague, following so swiftly on protests in Melbourne, Australia, represent "a critical mass" leading to what authors Brecher and Smith call globalization from below. Bello describes what he calls "deglobalization" as "re-embedding the economy in society, rather than having society driven by the economy."

The finance ministers meeting in Prague, however, seem determined to fight rather than switch; for all the condemnation of anarchists' Molotov cocktail hurling Tuesday, few commentators noted how fundamentally intransigent the world financial institutions remain a year after Seattle.

On Sunday, Canadian Finance Minister Paul Martin boldly proposed a moratorium on third-world debt -- a crisis blamed by reputable charitable agencies for 19,000 child deaths a day worldwide. "We made a commitment last year to faster action and we must make good on this commitment," Martin said. Canada's plan, which doesn't go as far as the full debt forgiveness demanded by the protesters, nonetheless was a significant move beyond the financial institutions' current stance.

But the proposal was soundly rejected by the ministers in Prague. Instead, they agreed to speed up existing debt relief plans. The ministers' rejection of even this modest step ensures that this week's protests will take their place in the long line of Prague dissent. Declared Anne Pettifor of Jubilee 2000, a Christian debt relief organization: "The empty rhetoric on debt relief and poverty reduction rings even more hollow."