By Steven A. Shaw 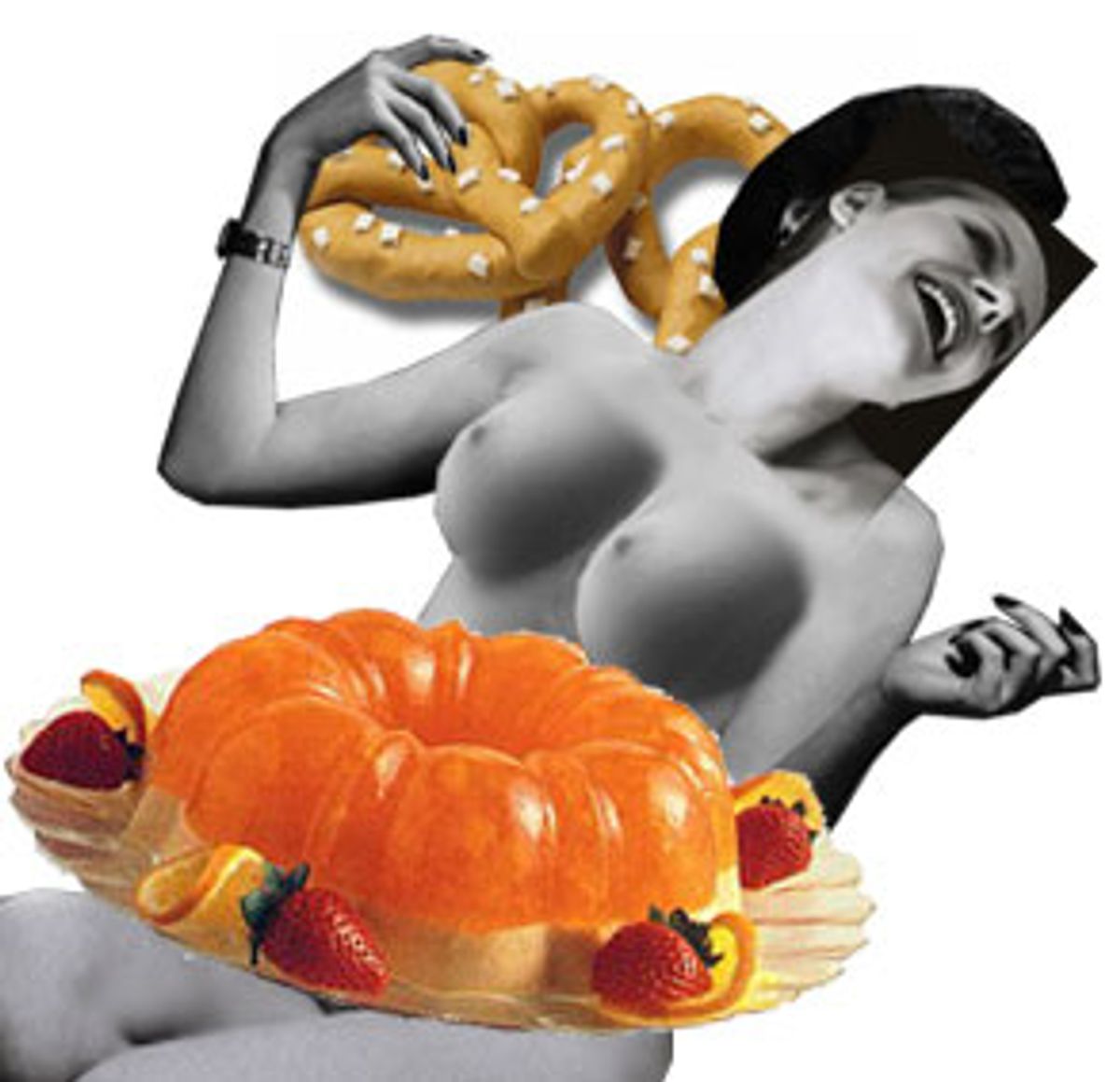 Though I eat a lot (a whole lot) I must confess I've not done much dining on women's bodies other than the occasional and predictable chocolate sauce or whipped cream in the budding stages of a college relationship. So when my editor at Salon asked me to investigate which foods are best when eaten after being smeared on your lover, my first reaction was, "several extra meals each day!" My second was to think of all the time I'd save on doing dishes. But I never anticipated how much the simple act of eating would improve -- nay, multiply -- my sexual relations with my actual wife.

But though the tongue is gifted at giving pleasure through tactile stimulation, it receives pleasure in an entirely different way: through the taste buds. And the taste of the human body, particularly of the sexual organs, can most generously be described as "interesting." The tongue is, in addition, set adjacent to the olfactory bulb, which is responsible for your sense of smell: another area in which the human sex organs do not exactly excel. Indeed, smell and taste are so inseparable that, unless you have a bad cold, you're likely to use the two in one combined sense.

According to the good doctors at Medline, "The tongue can 'taste' only sweet, salty, sour and bitter sensations. Much of what is perceived as 'taste' is actually smell." Try eating while holding your nose and you'll see. Unfortunately, if you try this while performing oral sex, you'll die.

Thus the tongue seeks other, nonsexual rewards, and my tongue has sought many on your behalf.

In order to determine the best foods for this experiment, I called my friend Chef Will (he doesn't wish his last name to be known, but he toils at one of New York's best restaurants) and asked what he thought would be best smeared on his lover's body. "It's just like any other culinary decision, really. You look for contrasts of texture, temperature and flavor. You use the best seasonal ingredients. And you strive for unique presentation." And he was serious.

With Chef Will's wise words in mind, I report the following tasting notes, as it were:

Sweet stuff is overrated. Sweet means sticky, and traditional whipped-cream and chocolate-sauce body glazes leave an unpleasant residue and allow for little in the way of subtlety. (The specially engineered body-paint product from Red Envelope, which comes packaged with two paintbrushes, is little better.) And that's not to mention the problem of body hair, which has a pesky habit of getting caught up in such adhesive mixtures.

On the other end of the spectrum, though food is an inferior lubricant, slippery foods can be quite stimulating. But whatever you do, no matter how smooth it feels, please don't rub food on your genitals and then engage in intercourse. You're going to make a huge mess, and the gritty sensations will be overall unpleasant. Food interferes with the body's natural lubrication system, and as an assist it doesn't perform nearly as well as synthetic products like K-Y or Astroglide (which are, in turn, superior to Vaseline). And for those who want to use appropriately shaped food as a surrogate penis, be aware that it can too easily break and become difficult to remove.

But hope is not lost for those who enjoy slimy stimuli. The trick is to use such foods (Jell-O being chief among them, and also some fruits, like kiwi) as an appetizer, and to clean the plate thoroughly before moving on to the entrie.

Artful use of contrasting temperatures virtually guarantees success. The one food (water, actually) that seemed a complete winner during my tests was the humble ice cube. (You may substitute any frozen, edible liquid.) Used with restraint, this guaranteed nipple-hardener can function admirably in a variety of erogenous zones. The trick, however, is to apply it with a light hand and not for so long in any one place that it becomes unpleasant. Warm foods (not hot, please) can also be effective, especially when applied immediately following the ice, though the mouth itself is quite warm (about 98.6 degrees Fahrenheit, as you know) and serves as, in my opinion, the better follow-up to cold stimulation.

The blind-feeding thing is a failure. Remember that great scene in "Nine 1/2 Weeks" where Mickey Rourke feeds the young Kim Basinger all manner of food while she's blindfolded? I thought the scene was totally, blisteringly hot, and so did every non-frigid person I know. But in real life, if you actually do this with your partner, it's kind of dumb. For one thing, the amount of mise en place (the technical culinary term for advance preparation) necessary to assemble 20 different, edible items for such a scene is daunting if you don't have the assistance of a key grip, the gaffer, a best boy and a craft services team. For another thing, the game grows uninteresting after the first couple of foods. Aesthetics are, after all, a major component of food enjoyment (it's often said that cuisine is the only art that affects all the senses) so it seems a waste to experience food in the context of sensory deprivation. Keep the lights on and your eyes open when feasting in bed. If you want to use the blindfold in sex, do it in another context: It doesn't pair well with food.

Avoid spicy, hot-pepper-based foods. They contain a chemical called capsaicin. When that stuff comes in contact with delicate membranes, such as those in the eyes, nostrils, female genitals (as well as parts of the male genitals) and anus, it burns -- badly. Even when applied to thicker skin, spicy things have a pesky habit of getting on the hands and eventually finding their way into the more sensitive areas.

Carbonation is interesting. Fizzy beverages -- champagne in particular -- are fun to slurp off of your partner. Still, I recommend you ignore the urban myth of Coca-Cola as contraceptive.

Masking, if necessary, can be effective. By masking we mean application to the actual genitals prior to oral sex in order to conceal the tastes of bodily secretions. On the one hand, oral sex performed in this manner doesn't feel as good as the unadulterated variety: It's just plain sloppy. However, aided by a small ice cube (see above), it can be interesting for a short period of time. On the other hand, this trick can encourage a reticent partner to perform with greater frequency an act that not everybody is enthusiastic about performing.

And then there is the issue of calories. I should have seen this coming, but I was surprised to learn that many people -- women in particular, I'm sorry to say -- are quite concerned about the nutritional content of literally every bite, so much so that they even care in this context. I was particularly alarmed that not one, not two, but eight out of 10 women I polled for this story expressed concerns about the calorie count of semen.

Now, in response to this bizarre concern, I could tell you that having great sex is about loosening up, letting yourself go and not being so neurotic. This is why, I've often maintained, happy fat guys and girls have more and better sex than their miserable, anorexic counterparts. But it wouldn't help to say that, because those who are diet-obsessed are typically deaf to reason, so here's the lowdown: According to sex therapists Linda Humphries and Jeff Thomas, "A typical ejaculate consists of about 3 to 5 milliliters (one tablespoon) of semen. There are about five calories in this tablespoon of semen. These calories come from simple sugars, which can make the sperm more active. Nutritionally, sperm cells contain small amounts of cholesterol, carbohydrate enzymes, proteins and trace amounts of iron and zinc."

The girls on "Sex and the City," however, advocate Cool Whip Free as a low-cal, whipped-cream alternative (imagine what a nightmare it would be to date one of them). And Atkins Diet practitioners need not fixate at all -- just be sure to whip it yourself (most of the commercial products have added sugar) and sweeten the cream with Equal, or just allow the natural sweetness of the cream to stand on its own.

Nor is great, fully clothed conversation over a fine meal to be underestimated as a means of foreplay. After all, the kitchen table isn't particularly comfortable for lovemaking (though it's at the ideal height for some things), and it's no coincidence that most bedrooms don't come equipped with dishwashers.

Steven A. Shaw is a New York food critic.

MORE FROM Steven A. Shaw