The evil that spiders do

We're hard-wired to despise these monsters for a reason. Now hand me that plunger. 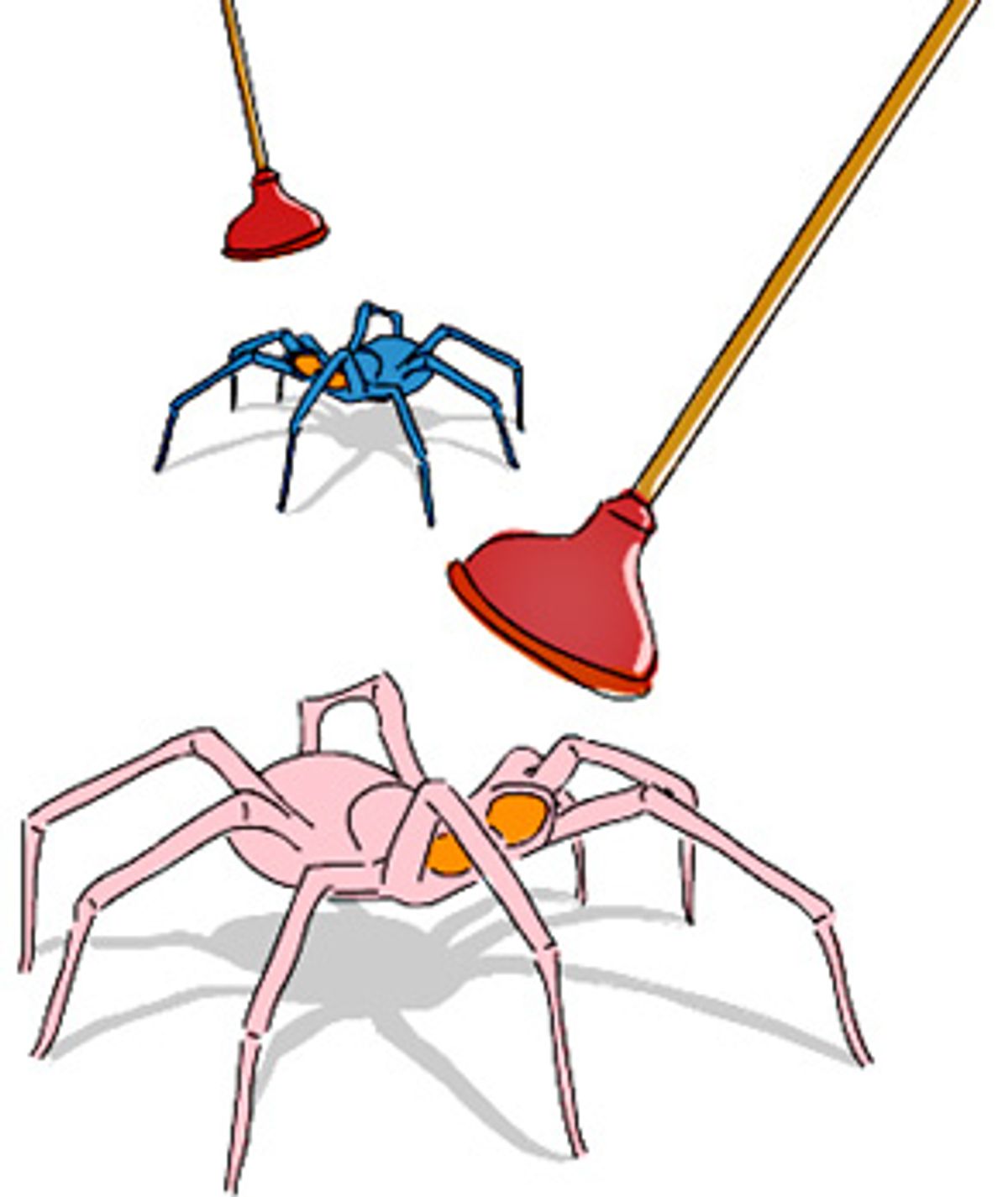 I was relaxing with the newspaper on my knees and my pants around my ankles when movement on the bathroom floor made my head swivel. What I saw coming toward me set in motion the usual reflexive reaction -- a full-body spasm accompanied by an involuntary vocalization wrung from my diaphragm like dirty water from a dishrag. For an arachnophobe, just a regular day at the office. But this time was different.

Taking in the size, speed and trajectory of the attacker, my brain scrolled rapidly through the category of "Spiders found in houses and apartments." No match found. As I called up the next category, "Spiders found in Borneo," two alarms became five. I screamed -- twice, I'm afraid -- and jumped into the bathtub. The monster rolled to a stop beneath a little table and sat motionless beside the baseboard. It was the biggest spider I'd ever seen outside of the Discovery Channel.

Scientists do not seem to have phobias figured out. As is the case with dreams and hemorrhoids, the best information is still largely speculation. Freud's hypothesis involved unconscious, suppressed emotions. Agoraphobia, the fear of open spaces, is sometimes linked to early separation anxiety. In the case of specific phobias like mine, some researchers blame learned responses due to early, direct experience (e.g., finding a spider in my ice cream) or coincidental associations (e.g., seeing a spider on the table just as my big brother spits in my ice cream and pokes me in the eye. Fear of older brothers is not learned: It's standard).

Nonphobics don't get it. People are always pointing to my Spider-Man watch. "Aren't you afraid?" they smirk. Well, no. Two legs good, eight legs bad. It's the sinister arachnoid form and its wicked speed that triggers reflexive responses deep in the limbic system of my skittish brain. I know this from personal experience -- once established, a good, solid phobia settles down into regions of gray matter that have nothing to do with higher reasoning. A phobia shares space with the reflexes that lift your hand from a hot burner or make you gag on bad food.

Just outside the laundry room in my apartment building there's a black mildew spot on the ceiling, a little larger than a silver dollar. I know it's there and yet it catches me every time, crawling into the corner of my eye as I come down the hall, causing me to jerk convulsively in a spray of dirty clothes while my neighbors hear an awful sound and wonder if a dying lemur is caught in the dryer.

And that's just for mildew spots. Actual specimens that appear in the bathroom sporting legs like Betty Grable summon up a whole different level of panic. As I stood in the bathtub my ears were buzzing. My internal organs had been hijacked by involuntary controls, my nervous system winging on a megadose of adrenaline. Thus did my body prepare me to do battle with a fragile creature 2 inches long and about as poisonous as an earthworm. It's hard to get the sympathy vote here, I know.

Had I been blessed with a more even temperament I could perhaps domesticate the beast, train it to fetch cans off high shelves or just win a passel of blue ribbons at the fair. But no -- battle had to be joined. If this thing escaped to some hidden lair I would have to douse the apartment with kerosene, give the neighbors a heads-up and drop a match. At the very least, sublet. I could not remain knowing it was at large. "Spiders? They're very beneficial, you know," people always explain to me. "They eat bugs." (Do tell.) "I always capture them and set them free."

Good for you. I always let out a piercing battle shriek and stomp them into greasy spider pbti. Arachnophobia and Buddhism cannot coexist.

It's been said we fear what we don't understand. Not the case here: Fear can be akin to fascination, and from an early age I soaked up all the information I could on nature's most ubiquitous predators. Strangely, I am fine with spiders I encounter outdoors (as long as the encounter does not involve my hair) and love to give colorful examples a cautious looking-over. It's only the prospect of being closed in with them that sends me into the bathtub without warning.

I stared at the bathroom spider, marveling at its leg span, noting its dark brown body and classically menacing profile. Spiders have a natural instinct for cover, and this one was protected from overhead assault by the table. I was in bare feet (now with my pants up, at least) and looking around desperately for a plan of attack.

A small pail full of rags, a plunger and a bottle of lemon cleanser were all I could reach. Stealthily I removed the rags, poured some cleanser into the pail and readied the plunger. Once upon a time gladiators were given their choice of weapon sets -- trident and net, or short sword and shield. I stood now with plunger and pail, awaiting my moment on the Coliseum floor. I was breathing hard. Miss that first shot and my quarry could be gone in a synchronized blur of legs.

The list of phobias makes for an entertaining read. I envy those who merely suffer from papaphobia: They can retire blissfully to the bathroom knowing there's precious little chance the pope will suddenly crawl out of the bathtub drain, although I guess you can never be too sure.

Caligynephobia, the fear of beautiful women, could prove especially debilitating. Not only would harmless romantic comedies be transformed into horror flicks -- if your date were to discover the truth about your affliction, your warm regard for her would suddenly take on an insulting new cast. And should you ever come down with tremophobia -- the fear of trembling -- you will be well and truly screwed.

The variety of neurotic human quirks may be endless, but certain phobias have always predominated. My own example is instructive. A couple of vague spider-related memories from early childhood may have provided the genesis for my fear. But a favorite family story also tells of how I became terrified of pine cones. At age 3 or 4 my parents had to carry me through forests after I became convinced one of the spiky little bastards bit me. Coniferophobia (my own contribution to the list) did not survive more than a year or so. Arachnophobia, on the other hand, took root as it has done in millions.

It cannot be an accident that the spider is a near-universal symbol of horror. The deep-seated sense of dread, the conviction that a spider's arched silhouette represents the signature of pure evil, must surely result from some hard-wired human tendency. Somewhere in the brain is a template capable of stamping this symbol of fear into the minds of a chosen few. While others sleep peacefully with the windows wide open to every crawling thing, these unfortunates stand in bathtubs, girding themselves with makeshift gladiators' tools.

The spider had not moved for what must have been five minutes. I steadied myself and heaved a wave of cleanser toward the baseboard. Jumping out of the tub, plunger in hand, I scanned the wall frantically. Nothing.

Suddenly there it was, a little wobbly and uncomfortably lemon-fresh but still mobile and making for the door. I stabbed at it with the plumber's helper. Missed. Worse, a blast of air from the collapsing rubber cone blew the spider backwards -- straight toward my bare feet. I squealed like a girl and leapt straight up. Then a frenzy of jabbing and plunging and, at last, my enemy lay dead by the baseboard. Also near the sink and a couple of spots by the door.

Nerves humming like tuning forks, I careened around the apartment searching for any moving speck, obsessively convinced that crawling intruders were everywhere. It was 11:30 p.m. On my second call I caught a friend on her way to bed and kept her up till 2:30 with nervous jabber. Around 5 a.m. I finally slept. Windows closed tight, tight.

Several times during a recent road trip I came face to face with death: a car screaming toward me as some idiot pulled out to pass on a two-lane highway. Each time I hit the shoulder with a shrug and kept driving, blood pressure barely nudged by a bona fide brush with annihilation. Yet three weeks after that bathroom combat I'm still jumping at every piece of black fuzz on the carpet. For a phobic, real danger is nothing compared to the archetypes of terror.

The watch says it all -- I'm a Spider-Man, all right. Let evil beware. I've got a plunger.