The "abortion pill" moves a woman's choice into the home. Will anti-abortion forces follow? 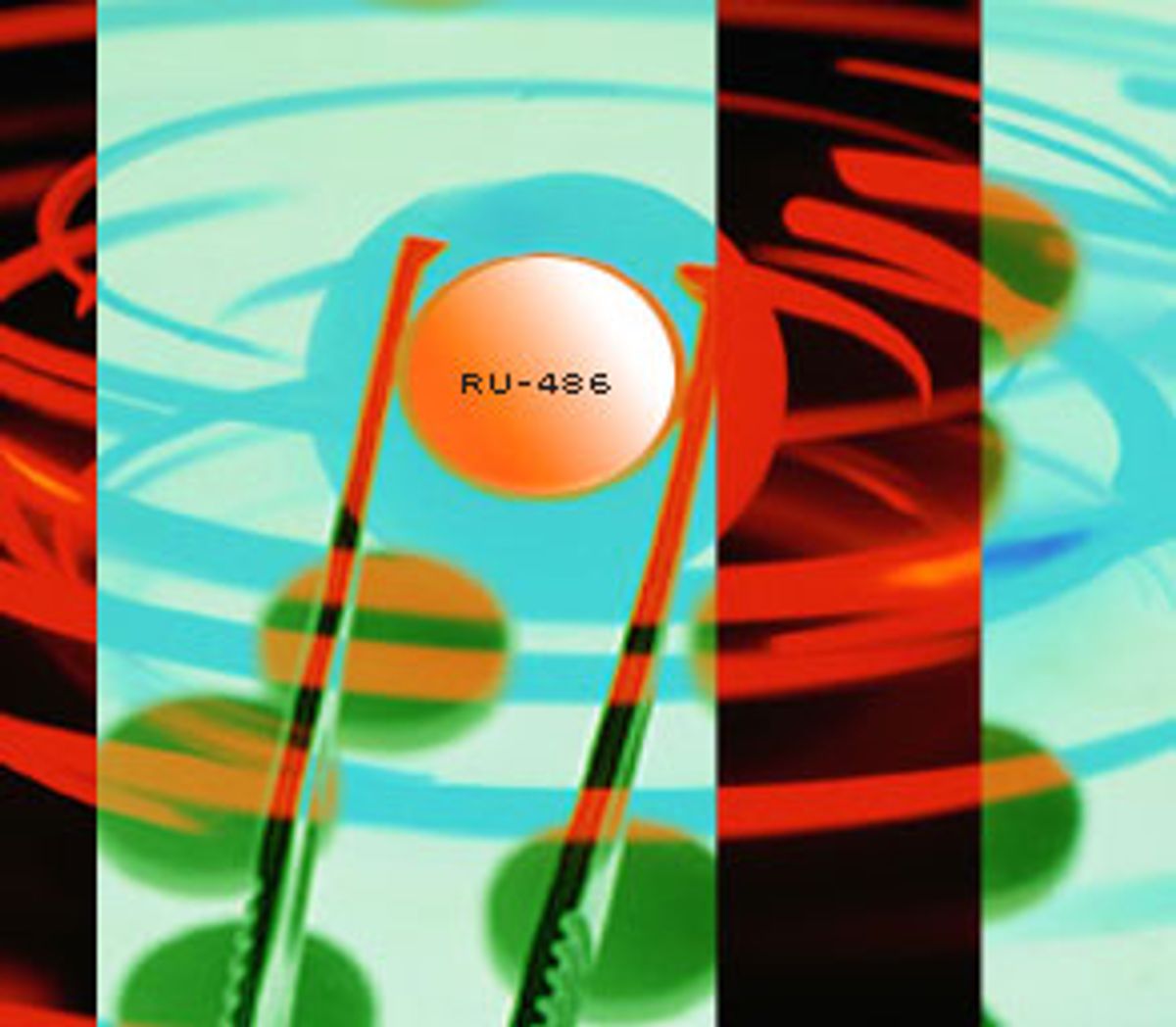 After more than a decade in limbo, the pro-choice community finally received word on Thursday that mifepristone -- now known as Mifeprex and formerly known as RU-486 or the "abortion pill" -- had been approved by the Food and Drug Administration.

"It's a great public health advantage that American women will no longer be deprived of this safe, private alternative to a surgical abortion," said Wendy Chavkin, M.D., MPH, professor of public health and OB/GYN at Columbia University Medical School. "An earlier abortion is a safer abortion, which makes it a boon for women's health. And obviously, it will improve women's experiences dramatically if they no longer have to run a gantlet of harassment to end their pregnancy, which is what happens in many parts of the country."

Mifeprix can be taken within 49 days of the beginning of a woman's last menstrual period to terminate an early pregnancy. Long available in France, the United Kingdom and Sweden among other countries, Mifeprix blocks the hormone progesterone that is needed for a pregnancy to be carried to term, then causes uterine contractions, terminating a pregnancy in its early days.

Women can take the medication in the privacy and comfort of their own homes (all the while under doctor's supervision). This change -- the fact that women can be in their own beds or on the couch rather than in a clinic or even a doctor's office -- is a watershed that will surely bring about a dramatic change in the landscape of abortion rights in this country.

The Mifeprix regimen consists of three pills: Two are swallowed on Day 1 of treatment and one is swallowed on Day 3. Women will be required to visit their doctor's offices on Day 1 and Day 3, and again on Day 14, to ensure that the procedure is complete. Studies have shown that 4.5 to 8 percent of women will need surgery or a blood transfusion to complete the procedure. Side effects can include nausea, heavy bleeding and cramping.

Some say that the prolonged treatment with RU-486 -- up to three days -- makes it too inconvenient to displace surgical abortion. But research indicated that privacy is extremely important to those who choose to terminate their pregnancies.

In addition to avoiding the harassment of anti-abortion protesters waving pictures of fetuses, women who use the abortion pill are likely to have more access to a physician who can prescribe Mifeprex than they would to a doctor who would perform a surgical abortion.

Indeed, 31 percent of gynecologists who do not currently perform surgical abortions said they will make RU-486 available to their patients, according to a recent survey from the Kaiser Family Foundation. More notably, while only 5 percent of family practice physicians routinely perform surgical abortions, 31 percent said that they would prescribe the drug to their patients if it were approved by the FDA.

The approval comes after a national upsurge in recent years of anti-abortion sentiment made it seem nearly impossible for RU 486 to be approved. It took more than 10 years, and extensive studies, for the FDA to approve the drug without draconian conditions for its use.

John Timothy Finn, director of Pro-Life America, sees the drug's approval as "a tragedy for women and babies. This drug will cause even greater trauma to women who have abortions than surgical abortions do."

Recent research doesn't support this. A June study in the American Journal of Obstetrics and Gynecology showed that out of 326 women who had abortions, those who took Mifeprex to terminate their pregnancies were twice as likely to report they were highly satisfied as the women who had surgical abortions.

"The face of the political opposition to abortion rights will change with this medication's availability," says Chavkin. "It makes it harder for the anti-abortionists to harass or intimidate patients or physicians."

Finn said his organization will encourage priests and pastors to warn people from their pulpits about this new form of abortion.

As James Bruggeman, head of the Stone Kingdom Ministries in Asheville, N.C., put it, it's "A sign of the downward spiral of morality in America."

While Finn mentioned boycotting the pharmaceutical company that produces Mifeprex, he did not know the name of the company. (Mifeprex will be manufactured by Danco Laboratories, a small company in New York.) He did vow, though, that his organization would continue to protest Planned Parenthood, which he called "the No. 1 abortion provider in the country." Now that the procedure is taking place in women's homes, he did state that he and the members of his organization will not actually go to private homes to "counsel" a woman about her decision, "unless she was a friend or relative."

Indeed, this would be a difficult strategy to pursue, given that women will now be able to choose to privately terminate their pregnancies without visiting a doctor with a "reputation" among anti-abortion groups for performing surgical abortions.

The FDA's action, coming just before the presidential election, prompted an unequivocal response from candidate George W. Bush, whose father banned the drug in the U.S. during his time in office. "People on both sides of the abortion issue can agree that we should do everything we can to reduce the number of abortions," Bush said in a statement, "and I fear that making this abortion pill widespread will make abortions more and more common, rather than more and more rare."

Cary Barbor is a freelancers whose work has appeared in CBS Healthwatch, Women's Sports and Fitness, and Walking, among other publications.