Flanked by members of the Green Bay Packers, the GOP candidate says his opponent's programs will be a disaster for red-tape-hating Americans. 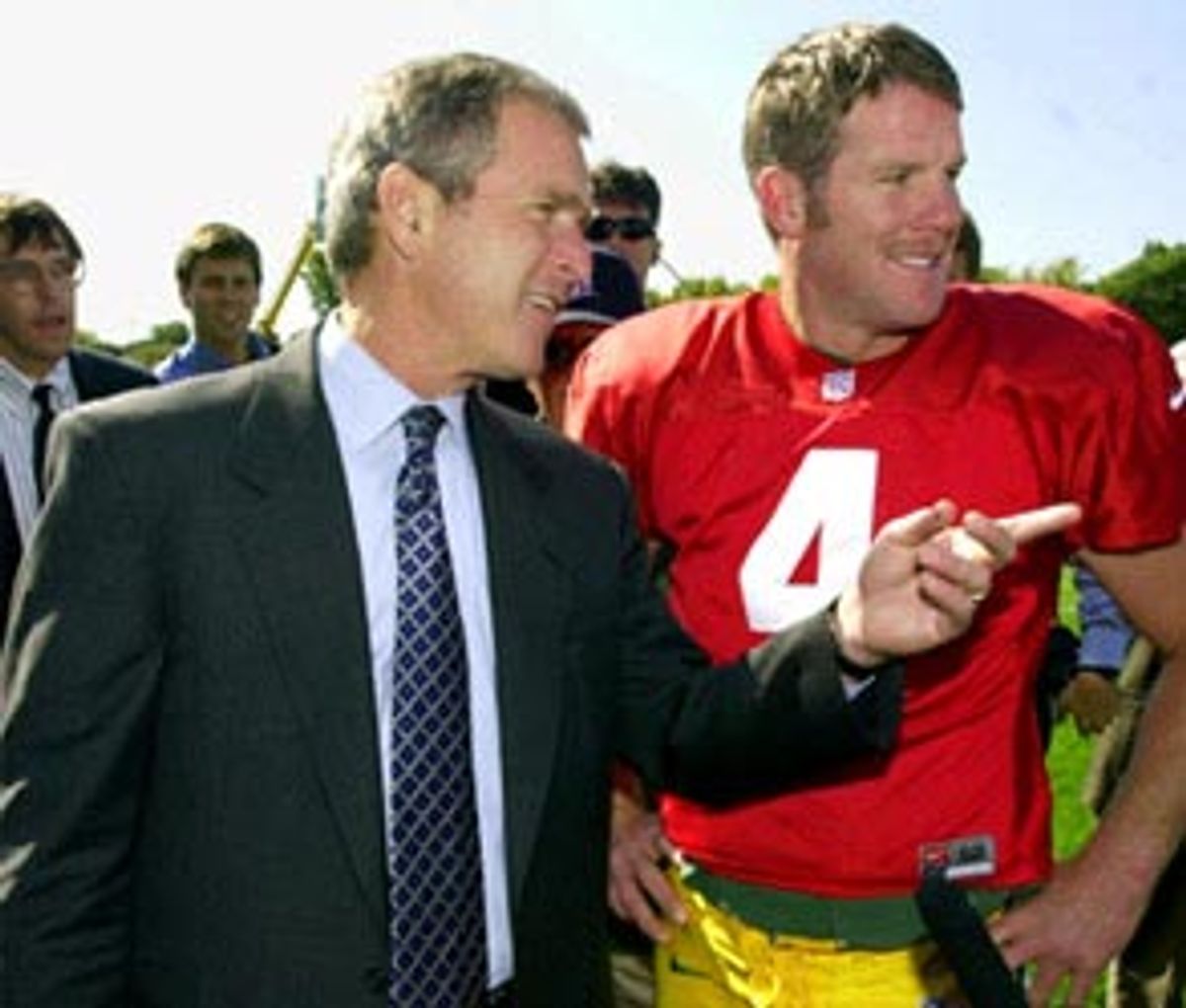 At a photo op at the Green Bay Packers practice field Thursday, Gov. George W. Bush was asked by a Packer, "Can we get the tax bracket lower?"

Bush laughed and turned to the reporters present. "I told you all!" he said. "People want tax relief!"

Turning back, Bush told the huddle of behemoths, "The press corps does not believe it!"

Of course, the average salary for a Green Bay Packer is $1.1 million, so the event wasn't quite on message. As Vice President Al Gore constantly reminds us, 60 percent of the cash in Bush's proposed $1.3 trillion tax cut goes to the richest 10 percent of the country. So the Packers' collective grunt for Bush hardly seems surprising -- which has been part of the governor's problem in sealing the deal with an electorate so far.

The economy in general has been part of a larger perplexing question for Bush: How to slam a sitting vice president during a time of unprecedented prosperity?

And today, immediately before the Packers photo op, Bush answered his campaign's conundrum with a new approach, which he called "Maintaining Prosperity," invoking monsters that he thinks Gore will unleash.

Standing in the warehouse of Tosca Ltd., a special container fabrication and service company, Bush fabricated images of the uncontainable Big Government Bogeyman he said Gore would let loose upon the country. Even though President Clinton declared "the era of big government is over," for Gore, "apparently the message never took," Bush said.

For the veep, "Big government has never really been dead; it has simply been bidin' its time, waitin' for its next chance," Bush drawled. "The vice president would like that chance to come next January." Gore has strayed from the centrist approaches of the Democratic Leadership Council, one of the few things Gore claims to have invented that he actually had a hand in, Bush said.

Swept up in his monster mash, Bush even seemed to get a bit carried away before his fawning audience. Though his prepared remarks stated that Gore would create "over two hundred new or expanded federal programs," Bush upped that number a tad, declaring instead to the shocked cheese-eaters that Gore would create "over 200,000 new or expanded federal programs." He did not correct himself.

Gore's big-government beast, Bush said, will spell disaster for all Americans. "We'll find ourselves working harder for the government -- appeasing it, pleasing it, trying to keep it at bay. More forms to fill out, more regulations to meet and more lines to stand in."

Gore's campaign returned fire in almost the same fashion. "Bush squanders the surplus on a massive tax cut for the wealthy and drags the nation back into deficits and debt," said Gore/Lieberman national spokesman Doug Hattaway in a prepared statement titled "Hey, Big Spender!" Hattaway argued that Bush's budget doesn't account "for the $1 trillion he would need to create private Social Security accounts nor the billions he would need to fund his 'Star Wars,' space-based missile defense program."

Beneath the horror-story sales pitch in Bush's remarks, however, lay a deeper argument about the difference between their fundamental philosophies. Bush described Gore's targeted tax cuts as unfair since they come "only if we behave as he wants us to."

Likewise, Bush said, Gore condemns Bush's plans for partial privatization of Social Security, while proposing one where the government invests some excess funds for Social Security, because for Gore, "Washington, by definition, is smarter than the rest of us."

As for his across-the-board tax cut, Bush said that Gore wants to give tax relief only to the "right people." But there are no "right or wrong" Americans, Bush said.

It was a fairly effective message, one clearly resonant with the crowd, all of whom seemed excited to hear about the Tank family. Sitting front and center, John and Bonnie Tank and their two children Merissa and Travis ("good Texas name," Bush said of the latter) would see their $2,045 income-tax burden lessened to $195 under his proposal, he said. He added the Tanks would still pay $1,835 under the Gore plan.

Bush's stops throughout Wisconsin Thursday afforded him the opportunity to press the flesh with other voters who will indisputably benefit from the Bush plan -- like quarterback Brett Favre, who will make $6.35 million next year, and defensive tackle Santana Dotson, who will earn a cool $5.6 million.