I can imagine Albert Einstein giving up the crucial equation for the chance to stroke her razorback shin. 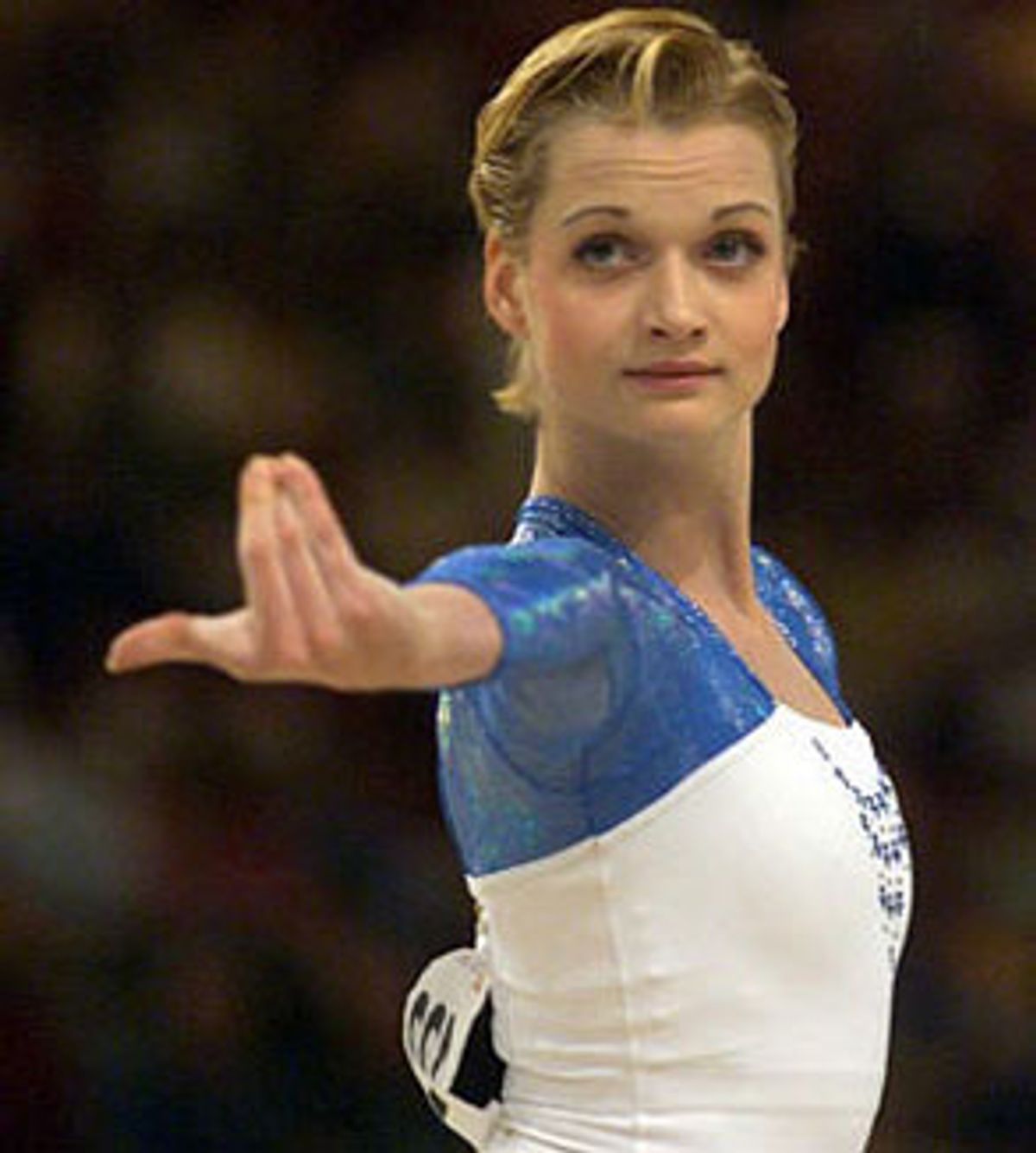 Thank God for television, so you don't have to meet everyone you see! Svetlana Khorkina is her own warning system, and though Sydney was all those time zones away, every time she looked into the camera (as if it were a chocolate profiterole) I knew how close I was to being devoured. There are women -- and surely there must be men -- who jangle and throb with alarms.

There, the zig-zag pressure lines announce, there is the very worst woman in the world for you. There is your demise and degradation. See if you can escape her. But you know that no matter the insolence with which she deigns to notice you, no matter that you can feel your paint being stripped off under her incredulous, contemptuous gaze, you are lost. You may have to marry her, or murder her. She is like a force of perverse nature in a Dostoyevsky novel, someone who could have all the brothers Karamazov, and Dad, for tea.

I was watching the Olympics with my son, a 10-year-old, and the first time I saw her I blurted out, helpless, idiotic, "Lord, she's a beauty!"

And he was scoffing because, at his tender age, I suppose, he saw nothing but an antic beanpole with broken blond glass for hair. He saw the dark shadows under her bloodshot eyes -- like the black market offering rotten fruit. He saw the vanity in her, the madness for gesture and self-drama, the evil smile that picked out any camera in the world. He saw that she was less human than a captive beast who honestly, truly, should be put down, put out of our misery, the kingdom where she reigns.

I saw all of this, too, and I knew that I would wait up hours for her on a cold street corner, in case she slipped her icy arm in mine and said, "Tek me hom." Not that anywhere could be her home, or that there would ever be any taking. But I can imagine Albert Einstein giving up the crucial equation for the chance to stroke her razorback shin.

She is or was, for a few days on television, a Russian gymnast -- in fact the greatest threat to come out of Russia since Vladimir Nabokov got away with the express charge of shaming us in our own language. She was hideously misused by the system -- so it was said: The vaulting horse was five centimeters too low. So she fell. But falling caught the eye, and then she was a tragedienne who wept and refused the chance to jump again, and simpered to the camera and said, look, I am a woman in nothing but a black lacy leotard from Frederick's of Vladivostok, and I could easily slip out of it and be bony, white and made for you.

As for me, I would have no doubt about who changed the height of the horse. She did. It made her. She controlled the gym from then on, as past tense rules a story. She's 21 and she wants to be an actress, said the commentator. No, she is centuries old, she is vampiric, and she is the snow from which the fresh water of acting is refreshed. We shall see her again, and I may have to beg my son to strap me down -- it will be good training for the final confinement -- so as not to run rampant after her. Svetlana Khorkina. Remember the name. And don't think the Russian peril is over.