In Garland Simon's future, everyone and everything will be on camera, all the time. 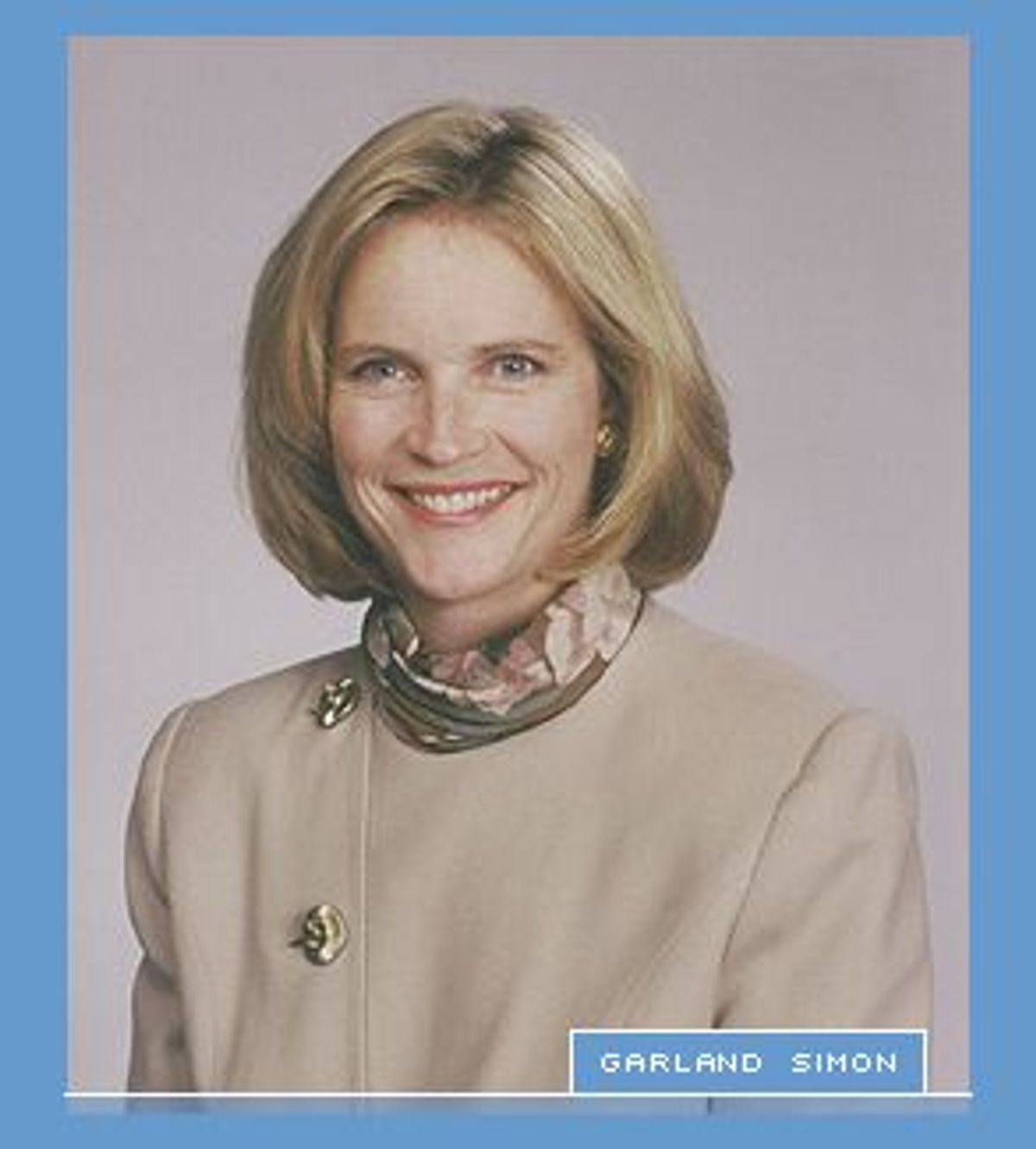 Garland P. Simon dreams of a world filled with cameras. Bedrooms, kitchens, traffic, tropical hurricanes, arctic snows, Super Bowl parties, wars, kennels -- she'd like lenses pointed at them all, the images filmed and broadcast over the Internet to the entire world.

But she's not yet another Orwellian Big Brother or some kind of Kafkaesque new-economy control freak. She's simply the 44-year-old, drawling CEO of Cammunity.com. Back in 1998, Cammunity was little more than an underdeveloped video search engine that returned plenty of pornography in its results. But since Simon took over in August of 1999, Cammunity.com has grown into a 16-person, venture-funded business -- a network of 10,000 smut-free webcams, filming everything from traffic at the George Washington Bridge to the pandas at the Atlanta zoo.

Simon, a former executive at ABC Sports and USA Networks, wants to harness the power of all these mechanical, online eyes and plans to vastly increase the size of her webcam network. In the long run, she hopes to build a democratic media giant that earns a sizable profit while offering a viable alternative to the calculated and saccharine top-down offerings of traditional media giants like Disney.

So far, the Atlanta company only draws about 200,000 unique visitors each month. Meanwhile, the market for reality-based content seems to be shrinking, judging by CBS's recent cancellation of "Big Brother." There's also the nagging problem that the most popular webcams on the Net aren't aimed at nature scenes, which is what Simon prefers to watch. Instead, they focus on shallow exhibitionists like DotComGuy and Jennifer Ringley of JenniCam fame.

Nonetheless, Simon welcomes the challenge to revolutionize the webcam, build a business -- and alter what we watch on the Net.

Why would someone come to Cammunity.cam when shows like "Big Brother" are turning away viewers in droves? Isn't the public tiring of "real-world" programming?

No. It's a matter of how the television converts 24-hour programming into something that's entertaining to watch for an hour. I watched both "Survivor" and "Big Brother" and while I liked "Survivor," "Big Brother" was pretty dull. They tried to make it exciting and failed. But that's what television requires -- an hour or so of programming. Reality content on the Internet is different. With the Internet, people can drill down and return multiple times. For example, one of our partners is Africam in South Africa, which places cameras all over the watering holes in the country's national parks. They get a lot of traffic throughout the day, much of it coming through us. And that's what we think works on the Net -- niches.

Can you make money, though, with hundreds or thousands of niches? What's the business model?

When we acquired the site, the business model treated Cammunity as a search engine for people who were looking for video or webcams on the Internet. But we really believed we could move the business forward. So today, we've taken the group of webcam producers and the best of the content they are producing and we've started syndicating that content to other sites that need to enhance their text-based sites with video. For instance, we've got a lot of producers who are doing weather and traffic-related images on a daily basis and those kinds of images can only help sites that are targeted toward those areas, like Weather.com. So that model of content syndication is a very important part of our business model.

Discovery.com, for example, is a group that we've been doing some business with. We've also been talking to groups that are developing Web yellow page directories, pointing out to them that live images will enhance their service -- especially with restaurants. People can go online and see if the restaurant is crowded or who's there. And if they can't get there, they can certainly see what their friends are doing. We have done a lot of events in the past -- specifically around the Super Bowl -- where we had webcams in competing bars in St. Louis and Tennessee last year

What are the majority of people filming?

One of the things that's interesting about webcams is that they connect people, visually, and they're entertaining. And it satisfies human nature. People are curious, curious about what's happening in other people's lives and in other parts of the world. But when you're dealing with the consumer you have to have them start out simply. So it might be their home, their living room, their pets. Some people even use them as their security cams. We've got a lady who has a webcam fixed on her mailbox because she strongly believes that the mailman terrorizes her dog. She wants to watch from work.

One of the other things that we're doing right now because it's in the middle of hurricane season, is ask our producers to turn their cams out their windows.

We don't place inappropriate content on our site. There was a period of time -- prior to when we bought the site -- where there was a lot of pornography on the site. But we've migrated it off. Now, we weed it out of there when we appeal to new cams. We ask particular cam owners what's going to be their primary content and their secondary content. They go through a waiting period of two weeks before they go online. And it's checked on a regular basis.

Is it checked by people, or bots? And how does the search function work? How does it know that someone who used to film dogs is now filming high school football?

It's in the description, the profile. For instance, if you were to type in the word "sex" you would probably get some sites just because the word sex is in their profile. It might say "no sex on this site" but that cam will come up anyway. These we check with bots every 60 days, so if the link changes, we can go back and ask the user to change the profile. Really it's a matter of staying in touch with the user, and the user's ability to stay in touch with us.

And if we're doing something in a time window, say for hurricanes, we test it first. For this month's Hurricane Gordon, we set up a separate page internally so we knew from watching the cams what they were looking at. And they were doing exactly what they had been asked to do.

What about the viewers: How many do you have and who are they?

We have about 200,000 unique visitors every month. And we've attracted a niche-oriented viewer. We believe our target audience is 17 to 25, that's our core audience. But a lot of people are curious; we just need to educate them about what we have. I mean, think of America's funniest home videos. You can see those every night on Cammunity.

Ultimately, where do you think the webcam community is going?

Well, the term webcam is relative to whatever the device is at the time. A year ago, there were teeny cams that gave out images that refreshed every minute at the most. Today you've got digital cameras that you can plug into the back of a computer, or some of them have a modem in the camera so you only need a telephone line.

The device itself is giving the consumer the power to do what professionals have been doing for 60 years of television. I really believe that what the webcam provides is a new path to the visual future of the Internet. We believe that this is a very powerful medium. There's so much talk about where audio and video are going on the Internet. Inktomi's acquisition of FastForward Networks [for $1.3 billion] is certainly an indication of where they think live video is going. Everything we're doing is about live video. If you don't want to miss a moment -- like at the Olympics -- that's what you need.

So where do we think it's going? Toward choice. The consumer wants more choices. And they might want more choices on a much more personal or local level, which they can't find from television or any other alternative. You might have a one-to-one relationship, say between a mother and a daughter on the other side of the world because the mother can't see what the daughter's doing in school. But that's an audience. And it's important. And when you aggregate it, the potential is enormous.

I also wonder if the future's Quentin Tarantino -- who has said he learned to become a director by watching movies in video stores -- will cut his teeth on webcams. What do you think?

I think that's a perfect example. That's exactly what's going to happen. Already, today in the television industry, it's so much easier to work with and edit raw footage. The tools that exist allow us to do this on our computers instead of going to expensive editing houses. The average computer person can produce television-quality programming. It's very democratic, and it's very empowering.