The truth about J.D. Salinger

We don't need exposis -- as Mary McCarthy showed long ago, the sickness is in his writing. 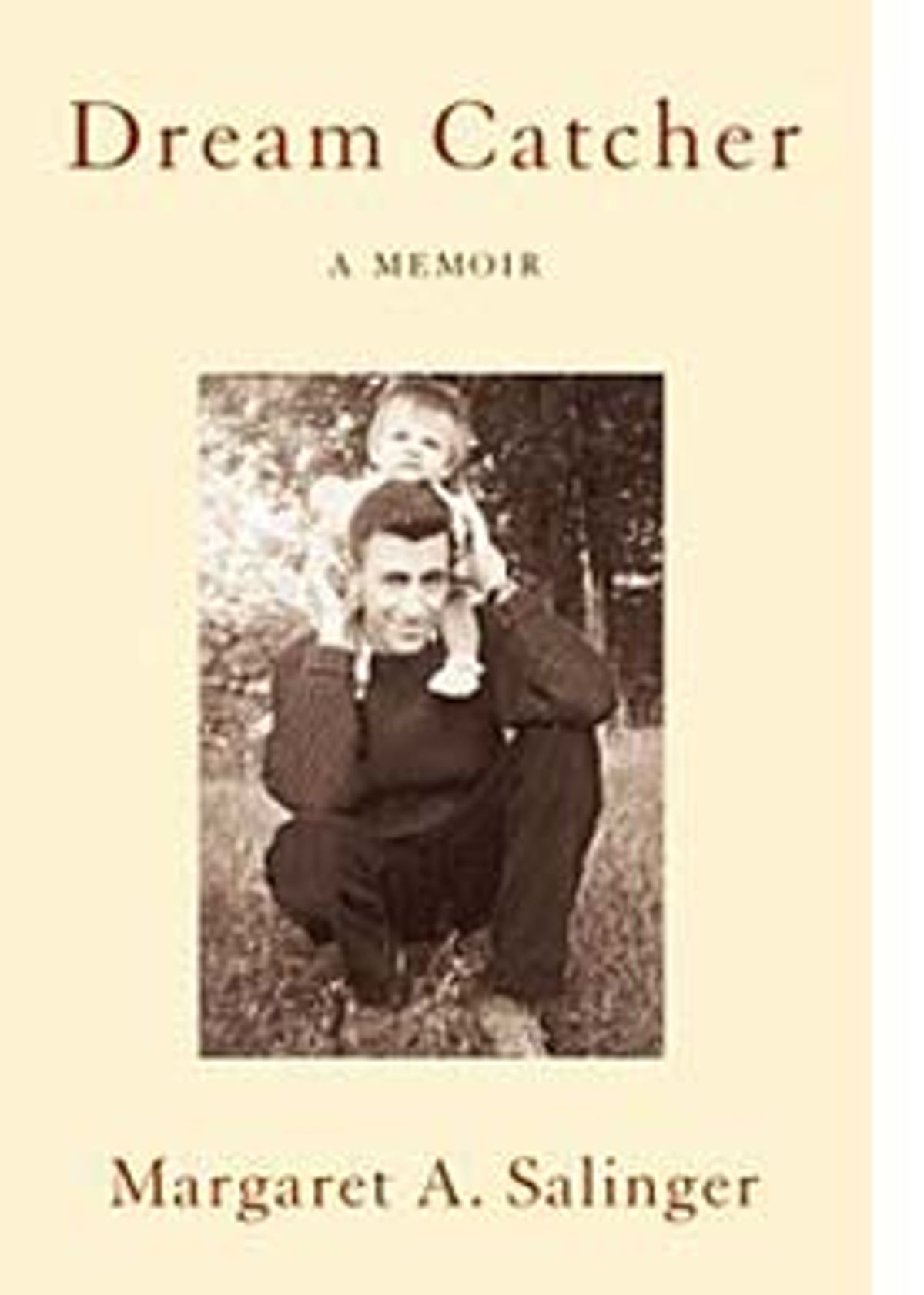 It seems that today's readers no longer trust fiction to level with them. We read memoirs, biographies and as-told-tos as if "truth" can only be found in what actually happened, as if "facts" contain an authenticity that stories do not, as if only "real" life accurately assesses the world. As novelist Martin Amis said in his recent memoir, "Nothing, for now, can compete with experience -- so unanswerably authentic, and so liberally and democratically dispensed."

Margaret (Peggy) Salinger's memoir of her life and of her father, J.D. Salinger, "Dream Catcher," exposes the cracks in the facade of the Salinger mystique. But the truth was always there in J.D. Salinger's fiction. More than 35 years ago, the late Mary McCarthy, writing in Harper's magazine, applied her considerable faculties to Salinger's oeuvre; what she found in it, to use her own word, was "terrifying."

Peggy Salinger was born in 1955, the year "Franny and Zooey" was published in the New Yorker. Although "terrifying" isn't a word that the remarkably generous Peggy uses to describe her life, she has suffered from bulimia, perceptual distortions, panic attacks, chronic fatigue syndrome and fibromyalgia. And, she says, "parts of me, little encapsulated personalities jettisoned during retreat, may well have died or are, at least, lost forever ... I have spent years, with doctors and friends beside me, cruising the archipelago, calling out, 'All-y all-y in come free.'"

J.D. Salinger's work still has tremendous power, especially for young readers. (At last check, "The Catcher in the Rye" was No. 172 on Amazon.com's bestseller list, nearly 50 years after it was first published.) In the '50s and '60s he was a code word. Carrying a copy of any of his books was a sign that you knew. Holden Caulfield, the caustic narrator of "The Catcher in the Rye," added the word "phony" to the common lexicon. Later, Salinger introduced the Glass kids, a fictional family of seven former wunderkinds (two dead), all geniuses, who were uniquely sensitive and uniquely close, and through them Salinger introduced Zen Buddhism and meditation to the general public. "Franny and Zooey," "Raise High the Roof Beam, Carpenters" (two novellas) and other works serialized the story of the fictional siblings as they spiritually suffered over all things phony or second-rate.

Yet, the stories of both Holden and the Glass family share a not-so-attractive quality. And it was this aspect of Salinger, a tendency to draw lines and to rate people, that McCarthy, in her essay "J.D. Salinger's Closed Circuit," pointed out: "Like Hemingway, Salinger sees the world in terms of allies and enemies ... 'The Catcher in the Rye' ... is based on a scheme of exclusiveness. The characters are divided into those who belong to the club and those who don't."

In Salinger's life, one could belong to this club and then get thrown out. Joyce Maynard, in her memoir "At Home in the World," reports that in the early '70s, after living with Salinger for eight months, she was unceremoniously booted out of his life. Eighteen years old to Salinger's 53, she spent the next 20 years wondering what it was that she had done. Ten-year-old Peggy Salinger was warned about this possibility, too. After an argument, Salinger told his daughter, "I'll always love you, but when I lose respect for a person, I'm done with them. Finished."

Respect is more highly valued than love, it would seem -- even when it comes to a 10-year-old daughter. It was not until Peggy Salinger was an adult and rereading her father's work that she noticed Zooey had this to say to his sister, Franny: "And don't tell me that you were ten years old. Your age has nothing do with what I'm talking about. There are no big changes between ten or twenty -- or ten and eighty, for that matter."

Salinger was certainly aware that she had fictional siblings. "Unlike me, his ten-year-old characters, my fictional siblings, were perfect, flawless, reflections of what my father likes." Of herself and her father when she was a child, she writes, "I managed to stay in his good graces most of the time, to be the swell girl ... but the price of admission was steep." At the age of 5, she showed a remarkable insight into her father's personality when she told him, "You only like people homeopathically" -- meaning he only liked people in small doses, and only people who were like him.

Perhaps the most startling information she gives us about her father, and the most sympathetic, is how much he identified with being a soldier. That, and the rampant and acceptable anti-Semitism of the '30s, '40s and '50s, might very well explain his contempt for WASPs. Yet his experience in the Army during World War II seems to be the only time in his life when anything broke through his self-absorption. "For Esmi -- With Love and Squalor," the story of a soldier fighting off a nervous breakdown brought on by war, remains in many critics' minds his most genuinely effective story.

In the Glass family series, Buddy Glass, the second born and the family writer, was taken to be Salinger's fictional alter ego. Yet, as Peggy Salinger writes, her father, although not concerned with her school grades, exhorted her to read the same books that are found in Buddy's brother Seymour's bedroom: Tolstoy, Ring Lardner, Kafka, Mu Mon Kwan and so on. And in still another character, Zooey, she recognized the same words and same apologies about commandeering a room that she heard from her father: "We don't talk, we hold forth. We don't converse, we expound. At least I do." Zooey is filled with remorse about his boorish behavior, as Salinger says her father was.

That Salinger can be found in every character he created was a problem for McCarthy. "And who are these wonder kids," she wrote, "but Salinger himself, splitting and multiplying like the original amoeba?" If this statement did not spell out the problem clearly enough, she restated her insight even more succinctly. "To be confronted with the seven faces of Salinger, all wise and lovable and simple, is to gaze into a terrifying narcissus pool."

Toward the end of her memoir, Salinger considers whether her father had been an "illusion"; McCarthy essentially asked the same question. Hovering over the Glass family is Seymour, eldest brother, the greatest genius of all the Glass geniuses, a mystic, poet, perhaps even a saint, who commits suicide in the story "A Perfect Day for Bananafish." Seymour's legacy to his siblings is his letters, the books found in his old bedroom (which is kept, shrinelike, exactly as it was when he was alive) and the famous epiphany he passed on: The Fat Lady is Jesus.

That J.D. Salinger allows Seymour's suicide to remain a mystery does not, in McCarthy's view, mean that Seymour is genuinely mysterious. And at the end of her essay, she finally drew her chilling conclusion:

Seymour's suicide suggests that Salinger guesses intermittently or fears intermittently that there may be something wrong somewhere. Why did he kill himself? Because he married a phony, whom he worshiped for her "simplicity, her terrible honesty"? Or because he was so happy and the Fat Lady's world was so wonderful? Or because he had been lying, his author had been lying, and it was all terrible, and he was a fake?

In 1961 and '62, a few years before Salinger stopped publishing, he came in for the toughest criticism of his publishing life. John Updike, a young Joan Didion, Alfred Kazin, Leslie Fiedler -- all voiced their reservations about his work, despite Salinger's charismatic language and extraordinary popularity.

For Updike, Salinger was "never strong on composition," but a chronicler of "static" subjectivity. Fiedler took seriously Salinger's religious leanings (as expressed in "Franny and Zooey"), but still couldn't help being disappointed with all that was "cute" within the work. And Didion, no stranger to matters of high stylization or self-absorption herself, thought his work was "brilliantly rendered" but also "spurious" because of "Salinger's tendency to flatter the essential triviality within each of his readers, his predilection for giving instructions for living."

But it was McCarthy's essay that got the whole and not the parts in Salinger's weakness. While other critics were intimidated by Salinger's genius for language, McCarthy, in an assessment that was honest, plain-spoken and brilliant, was ultimately democratic. She did not dismiss Salinger's writing ability, but nor did she overvalue it, writing, in one example, "These imprints of the Glass collective personality are preserved as though they were Veronica's veil in a relic case of well-wrote prose." She noted Salinger's tendency to attribute mystical intimations in everything associated with the family, even to what are essentially empty gestures. "A great deal of attention," she wrote, "is paid to the rituals of cigarette lighting and drinking from a glass, as though these oral acts were sacred -- epiphanies." And so the reader is able to see the "closed circuitry," the elitism, within the work.

McCarthy's essay is literary criticism at its best -- careful reading, done with an educated eye and common sense. The peculiarly destructive quality McCarthy identified, the "terrifying narcissus pool," is one we disregard, even as readers, at our peril. Criticism, so often regarded as the poor cousin to art or the seedy parasite feeding off noble artists, can and does make a difference. It isn't as if Peggy Salinger has debunked a great hero -- the truth about Salinger was always there, in his fiction. We just didn't bother to really read him.