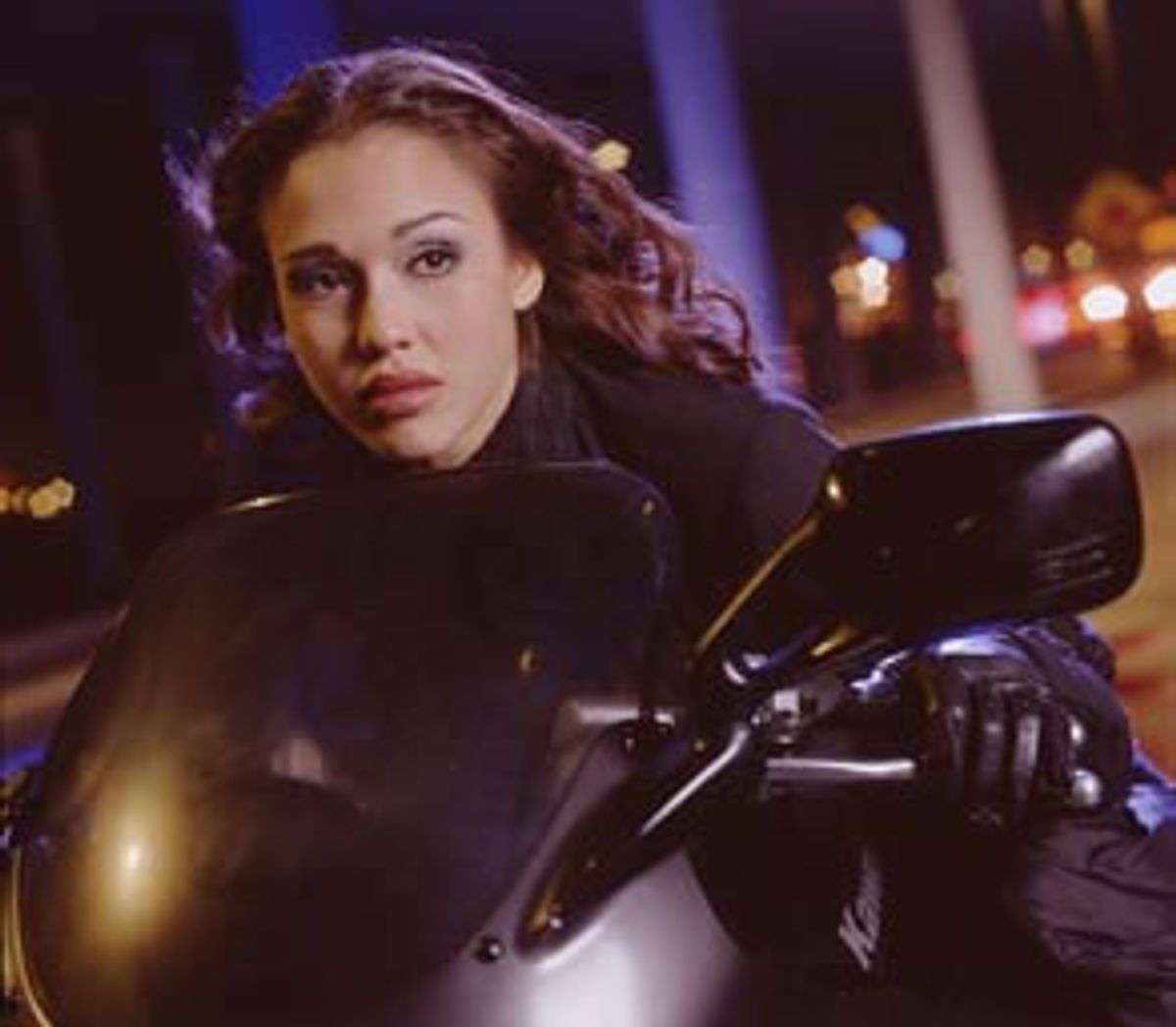 James Cameron used to love women -- buffed up, fearless, kick-ass women like Sigourney Weaver in "Aliens," Linda Hamilton (whom he later married) in "The Terminator" (which he co-wrote with his then-wife, producer Gale Ann Hurd) and "T2," and Angela Bassett in "Strange Days" (which he wrote for his then-then-wife, director Kathryn Bigelow). Weaver's Ellen Ripley and Hamilton's Sarah Conner were the first great feminist action heroines, blowing away the bad guys in grand maternal crusades to protect their babies and save the world.

But then something snapped -- possibly his marriage, don't ask me which one -- and Cameron started giving us women like Mary Elizabeth Mastrantonio's bitchy ex-wife in "The Abyss," and Jamie Lee Curtis' mousy, suspicious wife in "True Lies" (a hideous Schwarzenegger picture with a plot that hinges on the humiliation of Curtis' character).

And now, in Cameron's new Fox sci-fi action series "Dark Angel," the heroine isn't a grown-up woman at all, but a preternaturally ripe 'n' sexy teenage girl. In the two-hour series pilot (airing 9 p.m. Tuesday), which Cameron created and wrote with Charles Eglee ("Murder One"), director David Nutter's camera repeatedly takes a lazy, lingering crawl up the Lara Croft curves of the show's 19-year-old star, Jessica Alba. If I had a nickel for every time Alba's big, knowing, kinderwhore eyes and pillowy Angelina Jolie lips filled the screen, I could buy a round of Bazooka for the house.

Alba plays Max, a genetically engineered prototype for a race of superhumans. Tuesday's episode opens with the 9-year-old Max and a dozen other superchildren, all with shaven heads and bar codes on the backs of their necks, fleeing barefoot across the snow from a secret government lab in Wyoming. Armed military goons give chase: Some of the kids get shot with stun guns; others are dragged away bound and gagged. It's a tender, lovely scene. Max makes it to freedom with the help of a mysterious woman who finds her on the road and hides her in her car.

Flash forward to Seattle, 2019. Max tears around the post-apocalyptic (terrorists, an electromagnetic pulse, stock-market crash, don't ask) Emerald City on a big motorcycle, wearing a skin-tight catsuit and a heavy-lidded smirk. Max has a day job at a bike messenger service, where she toils with sidekicks from Central Post-Apocalypse Casting -- one Rasta, one coward, one stud, one sassy black lesbian. (Wait a minute, weren't those the sidekicks from "Aliens"?)

Max's pals know she's "different," but they don't know how different. She has super strength, super speed, super agility and she can even memorize long, complicated phone numbers, a trait that superhumans of the future would find especially handy, what with all this annoying splitting and overlaying of area codes. Max is also secretly searching for her "siblings" from the lab, but she's being hunted herself by the sinister head of the project's security force, Lydecker (John Savage, wearing an imaginary Snidely Whiplash mustache).

Through a chance meeting (OK, she was robbing a house), Max is befriended by Eyes Only (Michael Weatherly), a "cyberjournalist" who's fomenting a rebellion against the corrupt political and military leaders who now run the country. He offers to help her find the other escapees, if she'll help his cause. Like every other man in Max's universe, Eyes Only is captivated by her looks. He leads her to a mirror and strokes her face, telling her she's "exquisite." Whatever -- Max is, like, too cool to care. At least that's the bored front she puts up. She's such a rip-off of Faith from "Buffy the Vampire Slayer," the feral, haunted bad girl who just wants to be loved, it's not funny. Well, actually, it is.

Alba recites her lines in a thin, girlish voice laden with what's supposed to be "teen attitude"; she might as well be doing a Noxzema commercial, for all the emotion she registers. But, then, the way Alba is photographed in the pilot, it's not as if anybody's going to be concentrating on, you know, her words. Near the episode's climax, Max finally goes undercover as a hooker and you think, Hey, what took them so long? She paints her face and ditches her biker duds for a plunging red number with a slit up the side; in the pilot's signature scene, the camera lingers on her ass as she's bent over and used as a table by a slimy rich guy's bodyguard.

With "Dark Angel," Fox might have thought it was getting a girl power series to rival WB's "Buffy the Vampire Slayer." As if! "Buffy" creator Joss Whedon and his directors are never crass enough to allow their heroines to be shot as cheesily as Max is, to be reduced to nubile eye candy. Cameron and Eglee give us very little incentive to care about Max as a person, the way we care about Buffy or Faith. And that's because Max is little more than lips and ass and a premise reminiscent of other, better shows ("Buffy," "Roswell" and "La Femme Nikita," to name three).

"Dark Angel" is humorless, too, which is sort of unfortunate if your heroine is supposed to be renowned for her mouthy rejoinders. Here's a sample of the pilot's wit: Eyes Only: "You're a thief?" Max: "Girl's gotta make a living." I've only seen one episode, but it's hard to imagine "Dark Angel" continually reinventing itself, springing dazzling surprises on viewers the way Whedon keeps doing with "Buffy."

And, as far as special effects go, let's just say that "Dark Angel" is a bit of a letdown from the man who sunk the Titanic. You know what we get here for futuristic atmosphere? A hoverdrone -- a little flying saucer thingie that flies around spying on people. It's like the mini-Stonehenge from "This Is Spinal Tap."

But the most disappointing thing about "Dark Angel" is that, in comparison to the richly subtextual "Aliens" and "The Terminator," it's woefully lacking in imagination and soul. It pretends to be about a teenage girl figuring out who she is, but it's really just a lip-licking guy fantasy about riding the wild pony. Think back to those earlier, more mature Cameron heroines, with their ripped biceps and their fierce, maternal instinct-fueled courage. "Dark Angel" is a wish-fulfillment show for every guy who's had all he can stand of mature heroines with mommy power and big muscles. Lousy with jailbait fetishism, "Dark Angel" is the most expensive Britney Spears video ever made.

Fox keeps trying to hatch a supernatural spook show to carry on if and when the elderly "X-Files" retires. But you can add "freakylinks" (9 p.m. Fridays, beginning Friday) to the growing casualty list (along with "Brimstone" and "Harsh Realm"). This series from an executive producer of "The Blair Witch Project" wouldn't scare the Cowardly Lion. It's "The Blair Witch Reject."

The truth is out there, and Derek's brother was using freakylinks.com to investigate urban legends and other paranormal phenomena. But he went crazy researching the mysterious disappearance of the Roanoke Colony. Flashback to colonists in the woods, strange pictographs carved into trees, little Virginia Dare in a hooded cape. The camera spins around in circles. Oooh, the woods are scary! Stay out of the woods! Does this seem familiar? Ahhhh!

Anyway, nothing very spooky happens in Friday's pilot, unless you were one of those people who got dizzy and nauseous watching "Blair Witch," in which case you have been warned. Fox has gone to the trouble of setting up an elaborate Web site with lots of weird urban legend stories on it that may or may not be put-ons of put-ons. It's a lot more entertaining than the show. Here's an urban legend worth investigating: The mysterious disappearance of Fox shows on Friday nights. Oooh! Stay away from Fox on Friday! Fox is scary! Ahhhh!