The sound of silence

Heartsick over the bloodshed in Israel, liberal American Jews are so far paralyzed by a conflict in which Palestinians are aggressors as well as victims. 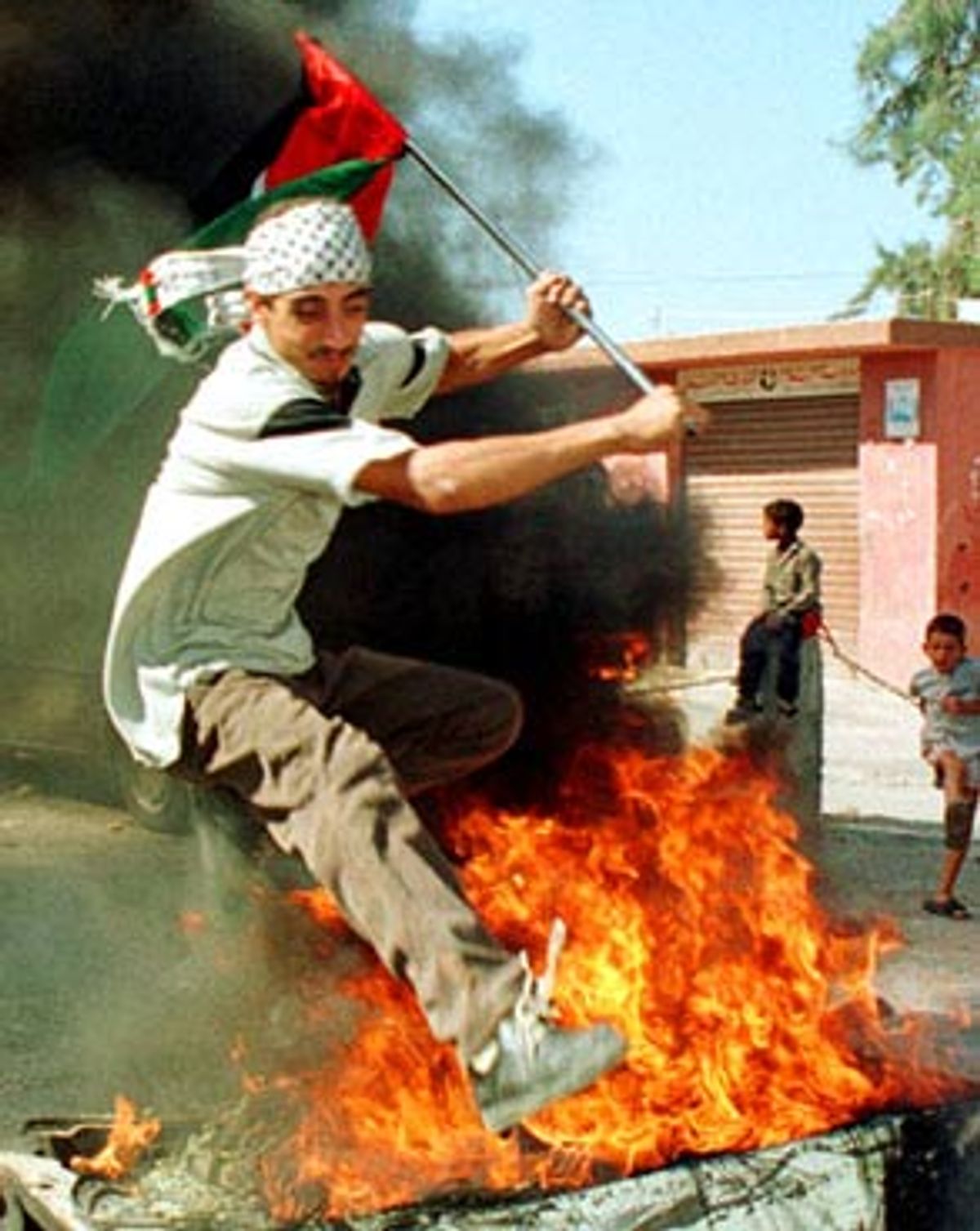 When American Jews worshipped together last weekend, they heard the familiar sounds of Rosh Hashanah -- the shofar being blown to herald the New Year, rabbis sermonizing on the theme of repentance, friends kvetching about the price of High Holy Days tickets at their synagogue. What relatively few heard was a forceful voice responding to the outbreak of fighting in Israel and the Palestinian territories.

By Monday, its fifth day, the violence had killed at least 51 people and wounded more than 1,300. Naturally it has taken American Jews time to grasp the rapid escalation of violence, and yes, organized reaction requires some amount of planning. Yet the comparative public silence might best be understood as the sound of confoundment, at least for the vast number of American Jews who have supported the peace process in however passive and distant a way.

The minority that has long opposed the land-for-peace principle and mistrusted Yasir Arafat as a negotiating partner -- about one-third of American Jewry in most polls -- has of course been quicker to react. They found grim confirmation of their caution in the bloody battle. Because this right wing is the most mobilized segment of American Jewry on matters of Israel, it promises to be the first to make its case resoundingly heard.

For the rest, however, the turmoil presents enough moral complexity, enough rival claims on the conscience, to induce a kind of paralysis. Neither the lockstep support of Israel during its four wars, nor the principled dissent from its policies during the Lebanon invasion and the Intifada, readily apply to a cycle of killing and destruction that began with a provocative visit to the Temple Mount by the right-wing politician Ariel Sharon, but has been tolerated if not orchestrated by Arafat.

The heartbreaking signal image of the conflict -- one many American Jews saw in their newspapers or on television before attending services on the second day of Rosh Hashanah -- was of a 12-year-old Palestinian boy, Rami al-Dirreh, cowering for cover behind his father before being shot fatally in a crossfire. Just like the horrifying images of Elian Gonzalez being seized by federal agents last April, the awful photos and videos of his death don't telegraph the full complexity of the story. This second Intifada is being fought not only by teenagers with rocks, but by Palestinian soldiers with assault rifles, and it is being waged not just in the distant alleys of Gaza but the Arab villages and religious sites of Israel proper.

Even without such emotional confusion, the liberal mainstream of American Jewry often fails to act on its professed feelings for Israel, whatever they are. When polls ask simply whether American Jews support Israel, naturally almost all of them say they do; except for anti-Zionists like Norman Finkelstein and Noam Chomsky, from most Jews any other answer smacks of treason. Yet in concrete ways such as visits to Israel, Hebrew fluency or children studying in Israel, the non-Orthodox 90 percent of American Jewry show a much weaker attachment to the Jewish state than do their more religious, and more politically conservative, brethren.

Similarly -- with the exception of such individuals as Leonard Fein and Letty Cottin Pogrebin and such groups as the New Israel Fund and Americans for Peace Now -- the silent majority that supports a negotiated settlement has expressed its hopes mostly in an inactive, wishful sort of way. While the New Israel Fund raised $9 million in 1993, the optimistic year when Arafat and Yitzhak Rabin shook hands at the White House to conclude the first Oslo pact, a single right-wing philanthropist named Irving Moskowitz has poured twice as much into Jewish residences and yeshivas in Arab neighborhoods and the occupied territories.

Liberal American Jews also lack any useful model for how to respond to the current strife, because none of the old templates apply here. In the first half of the 20th century, such Jews backed Zionism as an ideal marriage of their beliefs in socialism and Jewish nationalism. The wars of 1948, 1956 and most especially 1967 and 1973 inspired American Jews of all stripes to rally around a Jewish state in time of crisis.

During the Six Day War, American Jews massed for their largest rallies in history, 100,000 strong in Washington and 150,000 in New York. When Egypt and Syria attacked Israel again on Yom Kippur in 1973, American Jews donated more than $700 million to the United Jewish Appeal, an annual figure not surpassed in peacetime for almost a generation. Norman Podhoretz, writing in the New York Times, termed the response "Instant Zionism."

But that sort of visceral, unquestioning alliance started eroding when Israeli forces headed by Ariel Sharon invaded Lebanon in 1982, and was weakened even more when a Lebanese Christian militia allied with Israel slaughtered more than 200 Palestinians in the Sabra and Shatila refugee camps. In Arab lands, in Europe, but also among Israeli and American Jews on the left, Sharon was enduringly cast as the villain of both the war and the massacre. (Which helps explain why his appearance last week on the Temple Mount provided the catalyst -- the cynical would call it the pretext -- for Palestinian violence.) Five years after the Lebanon invasion, the West Bank and Gaza erupted into the Intifada, again leaving Israel to play the role of occupying army.

With Lebanon and Intifada, liberal American Jews as varied as the historian Arthur Hertzberg and the director Woody Allen publicly broke from Israel. The American Jewish Congress, important symbolically if not numerically, took the extraordinary step of buying a full-page advertisement in the New York Times endorsing a land-for-peace settlement with the Palestinians.

Even as conservatives controlled the official organs of American Jewry -- the American Israel Public Affairs Committee, the Conference of Presidents of Major Jewish Organizations -- the grass-roots majority swung toward a pro-negotiation position, particularly after it became the policy of Israel's government with the election of Rabin in 1992. Liberal American Jews clung to the stance during the conservative regime of Benjamin Netanyahu, and with the election of Ehud Barak as prime minister in 1999, they could well, and comfortingly, imagine that peace was at hand.

Now none of the familiar formulas apply. The current fighting, however unexpected and threatening in its intensity, does not present the kind of imminent threat to Israel that forces American Jews to close ranks around the Jewish state. This is not, for instance, the Egyptian army broaching the supposedly impregnable Bar-Lev Line in 1973. But the Palestinian role in these bloody clashes won't generate widespread sympathy or solidarity, either. The stoning of Jewish worshippers at the Western Wall, the assault on the religious shrine of Joseph's Tomb in Nablus, the killing of a 24-year-old Israeli who stopped to change a tire, the shooting at a school bus on its way to an Israeli settlement Monday -- these leave Palestinians looking more like aggressors than victims.

For American Jews on the right, the violence will all have been foretold by the original sin of negotiating with Arafat. Their hand is strengthened by Palestinian leaders' more recent incendiary claim that there is no proof a Jewish temple ever stood atop the Temple Mount. And these American Jews, from the safety of the Diaspora, have never been reluctant to tell Israel what to do.

As for the silent majority -- the segment of American Jewry too disengaged from Israel to dare advise it, yet too engaged to sever the ancestral tie -- all is perplexity today. They saw Yasir Arafat at Camp David turn down 90 percent of the West Bank and a divided Jerusalem for his capital. Then they saw Ariel Sharon march provocatively up to the Temple Mount, the most controversial piece of land in the deadlocked negotiations, a shrine revered by both Muslims and Jews. And then they saw the photo of 12-year-old Rami al-Dirreh, who is now being called a martyr for Arab Jerusalem.

These American Jews aren't saying very much, but they are certainly wondering how we got here, and seeing plenty of blame to go around. Ultimately, the question in their collective conscience might go something like this: If Arafat was just waiting for an excuse for violence, then why did Sharon have to give him one?