Does it work to have different people for different things, or do we all want a spouse? 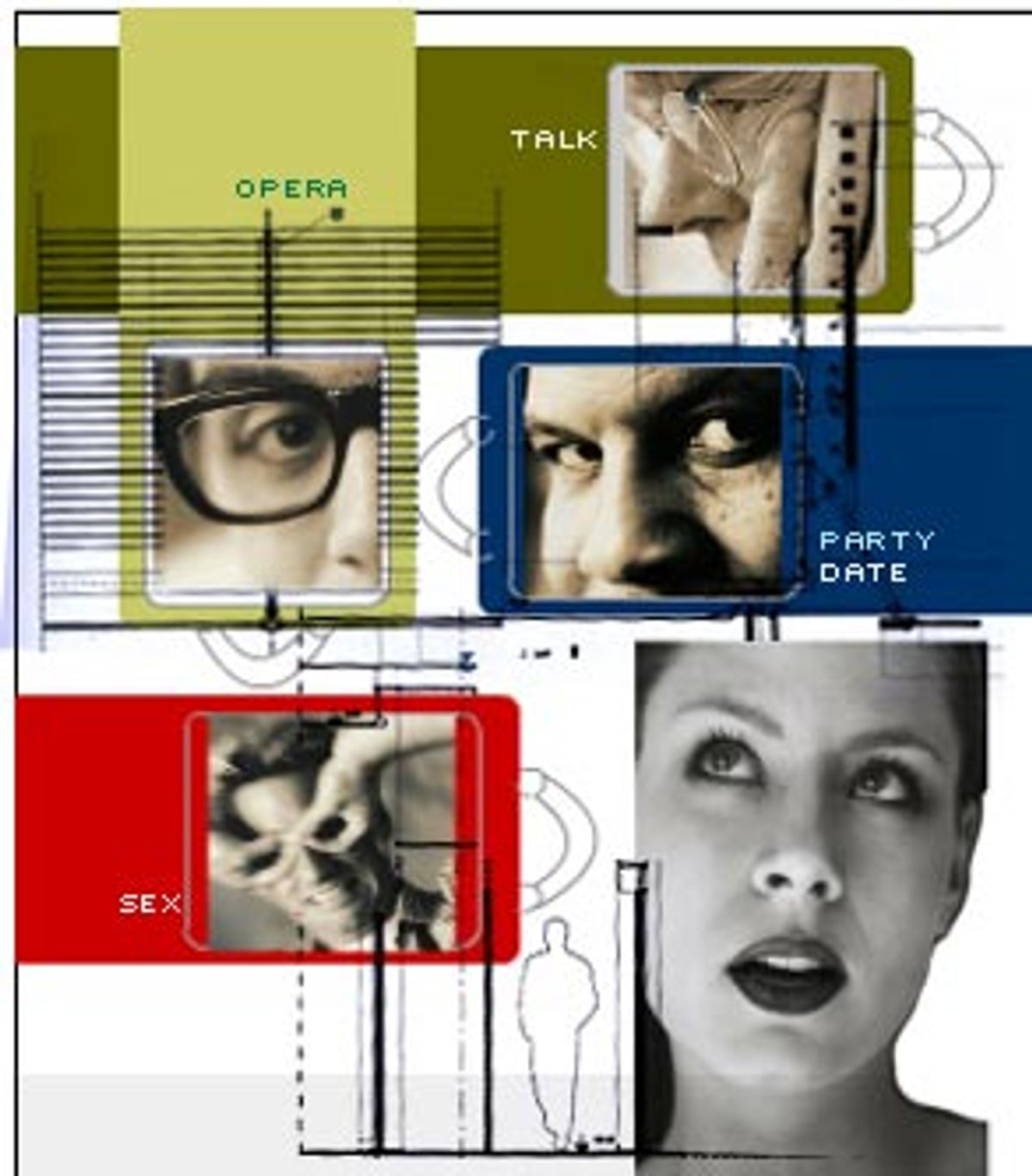 I've been in New York two months, and I already know a writer who has weekly sex with a man who won't leave his chronically ill girlfriend; a dog walker who answers booty calls from two unhappily married women; an editor who stops the Wednesday sex romp with his neighbor from becoming a "relationship" by refusing to kiss; a Web designer who sleeps with her local bartender once or twice a week, but never on weekends; and a heterosexual actress who dabbles with a lesbian, "but only once a season, so nobody gets attached."

None of them are sleazy people. They all struggle to keep their mini-relationships fair and honest. Most would prefer one steady guy or gal, but they fill the niches that come available in the meantime. Naturally the boxed become boxers themselves, constructing their own sets of friends and flirtations and fucks and arm candy. As a four-year New Yorker put it, "Back in Iowa, you'd find one OK guy and stay with him. Here you can find the perfect sex partner, the perfect party date, the guy who loves opera as much as you do, but he's never one guy." And if that guy did exist, he'd likely be dipping into the stream of single women rushing through New York.

Since I arrived, I've been content to observe all the complex spawning from the shore. I was pondering my own niche-ability, my personal balance of Iowa and New York. A sexual compartmentalizer is only as good as her last fling, and the ratio of pleasure to empty feeling afterward wasn't great my last few times out.

And then along came a guy I'll call Gary. I met him at a glittering party in a downtown loft. The guests included New York Times bylines and a movie star, but Gary was the one you noticed. Blue-black hair hung into his huge gray eyes, ringed in eyeliner. His spectacularly gym-puffed body was encased in a skintight Betsey Johnson dress and platform boots.

He was pretty and witty and, astonishingly, not gay. He talked like a bright Valley Girl, with lots of "dude" and "totally." We chatted about his workout and music, and he mentioned ecstasy. I'd tried the "love drug" twice before to no effect, but remained curious about a substance described as instant intimacy -- the perfect compartmentalizer cocktail. I took Gary's number and called a few days later.

We began to negotiate our outing. I suggested we take some "E" and go dancing. He countered, "Dude, a club is the last place I'd want to be on E." Remembering my tripping days, I suggested wandering through Central Park and making an adventure of it. He said his perfect E date was talking on a couch with close friends or maybe a woman -- "a little touchy, a little kissy, not necessarily sex. You want to do E with someone who gets your vibe."

He then pointed out that the ideal sex column on E would be about sex on E, not a dance club on E. I was getting his vibe. We paused awkwardly, then he took the leap, "Look, you're a smart, attractive woman, so I'm totally up for doing E with you." Reading my mind again, he reassured me, "I guarantee you will want to touch. Me, I'm into touching and licking on E, but there's no pressure to do anything you don't want to."

From the shores of celibacy, I considered his suggestion -- and envisioned him out of that dress. Maybe the clubs weren't such a great column idea -- just kids in fluorescent couture leaping around, after all. And Gary seemed sensitive, easy to talk to, up for anything. Still, it felt so calculated, like setting up an appointment to have sex. Again, he answered what I hadn't spoken: "Sleep on it, let's talk in the morning."

That night I talked to a college friend who has two young daughters. She described feeling used up by work, the kids and housecleaning. "And what little you do have you want for yourself," she said, "not for this husband who criticizes the way you put away the damn dishes." Her familiar complaint reminded me that marriage often sounds at least as exhausting, lonely and unrewarding as emotional diversification. I told her what I was considering, and she sighed, "It sounds so exciting and free." But then she admitted she probably wouldn't go if she were I, because "with pickups, the aftermath always seemed so awkward."

In the morning, I hit Gary with yet another suggestion -- how about I take ecstasy and he not take it, and we go to Central Park. To my surprise, he said, "I think I like that idea the best."

It was the last beautiful summer day, and Gary looked adorable in a baby blue T-shirt dress and sandals. I laughed at how many stares he drew. As we wandered north through the park, I asked him how wearing women's clothes affected his love life. He explained that women initially felt the comfort of a girlfriend or gay friend, and that that often moved into sex. He added that his look, not accidentally, scared away husband hunters: Hookups, not girlfriends, were his preferred romantic form.

We were building our sex box. Knowing he was an inveterate hooker-upper, I could suspend my normal date checklist (longest previous relationship, etc.) and just enjoy his company. The drug also let him take care of me. He was a thoughtful dose-ent: He'd brought two bottles of water and vitamin C tablets. He kept asking if I felt anything.

I said, "Well, everything looks really beautiful and I'm having fun with you, but I don't think I'm high." I didn't mind that I never felt any drug effects. We walked and rested and played Frisbee and walked more and then settled under a tree near the reservoir. Just as I was wondering how to cross into touching, he asked if I'd like a massage.

A few minutes later, I was enjoying my first kiss as a New Yorker. And then my first cab ride home with a man unhooking my bra and then my first gentleman caller. We slid around each other's bodies for hours, talking about things we'd done and things we might want to do. "Dude, I've never talked about this stuff with a hookup before," he exclaimed at one point.

Exhausted, we got under the covers around 3 a.m. As usual, I stayed wide awake, and I could hear by his breathing he was too. We'd arrived at the bad part, the reason women wait for one multiple-box man. I spoke into the dark hesitatingly. "We've negotiated everything so well, so let me ask how you handle this part? This part where it's been fun, but now I'm lying here hyperconscious that I don't really know you and trying not to feel bad and there's no way I'm going to sleep." Pause. "Dude, maybe you're coming down from the E."

I plunged into inappropriate post-pickup babble. "Maybe I'll feel better if we do closure now. I mean, we're not going to do this again, right? You're going to keep hooking up, and I'm going to go look for a husband."

"Dude, you want a husband?"

I said I didn't know, but my biological clock was certainly winding down. Pause. "You could freeze your eggs," he answered, not unkindly.

Then he rallied from his exhaustion and said, "First of all, 'We never see each other' is just one scenario. We have fun together; I don't see why we couldn't hang and maybe hook up sometimes. Second, even if you never see me again, where's the loss? We've had all this pleasure and tomorrow you still have your life and your friends and everything. How are you worse off? Are you saying you never want to have sex until you get married or something? That's stupid, man."

He'd come through in the darkest hour, the 14th in our marathon date. He was right and, more important, he made room in the sex box for vulnerability and kindness. You can't count on strangers for this, but you can't count on exhausted spouses either. Gary restored my faith in the finite connections that sustain, not drain, a solitary life.

It's not that I'll never long for the one-man-for-years scenario that A) I've never experienced and B) seems to make everyone I know unhappy. But it is stupid for me to deny I'm a natural compartmentalizer. I like my neighborhood interactions with the bagel guy and the newspaper lady and the man who buzzes me into the gym. I like going out and meeting people and coming home and not having to make conversation. I like the first kiss. I like hooking up in Central Park with a man in a dress, and I don't need to do it every day.