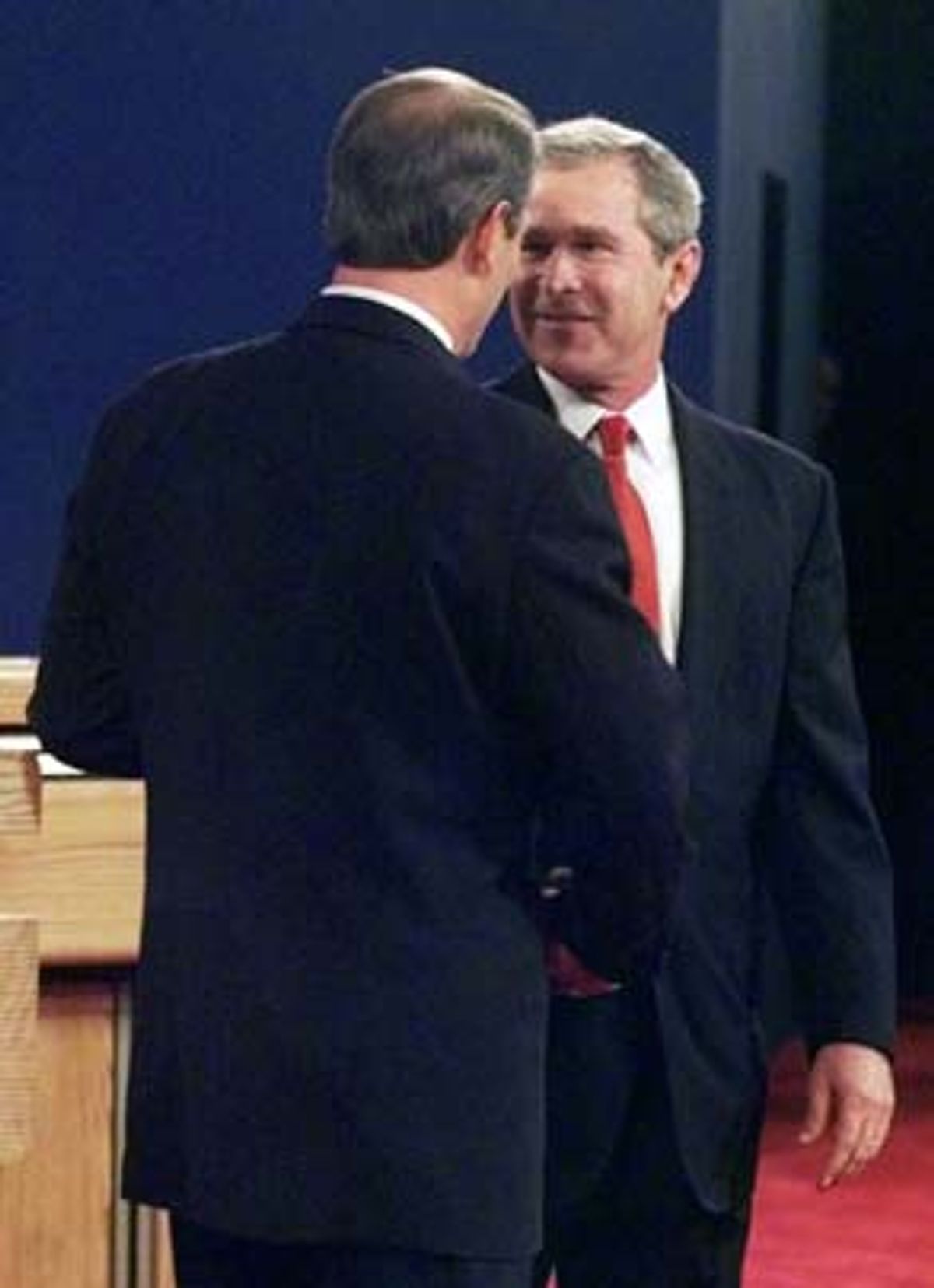 Like NBC affiliates throughout the nation, Fox didn't deign to broadcast the first presidential debate Tuesday night. But unlike NBC, Fox did at least provide programming Monday that proved preparatory. "The Sexiest Bachelor in America Pageant" featured an array of focus-group-approved bohunks fielding gentle questions (some with the veneer of difficulty) and trying to win the approval of a key swath of women voters.

The 51 men pretended -- yuck, did they pretend -- in order to win the support of the female audience, in whose hands the election rested. Hence, they pandered. They liked moonlit walks, they said, they liked fidelity and cuddling. One said his biggest fault was that he was always planning for the future and not enough of a party guy. Another swore his favorite part of a woman's body was her eyes, since they reflect the soul.

The challenge was similar for Gov. George W. Bush and Vice President Al Gore one day later -- they had to feign, for the benefit of a few small clumps of undecided voters in a few key states, a substantial majority of whom are women.

Bush had to feign substance, Gore style; Bush gravitas, Gore veritas; Bush familiarity with the English language, Gore a personal approach reasonably close to that of earthlings. Bush had to seem remotely up to the most important job in the universe when he can't make it past graph three on a briefing paper; Gore had to act as if there were things important to him other than his own personal ends, damn the means.

There were other, more cosmetic, attempts to hide the blemishes, ones discussed in Smoke-Filled Backroom Negotiations between campaigns. The hyper-sweaty Gore, who perspires more than Dick Nixon on a luau spit, won a concession to have the theater at the University of Massachusetts at Boston's Clark Athletic Center chilled to 65 degrees. Bush's representatives lost out on their request, however, to have their candidate's lectern a little lower than Gore's, apparently so that Bush, at about 5-foot-10, would appear to be as tall as Gore, who is 6-foot-1.

It is the job of reporters, of course, to pierce their feints. That said, there's not much work for us to do on this, as both men failed at their pundit-prescribed tasks.

Gore, with several layers of clown makeup caked on his puffy face, seemed double-digits smarter, but his rhetorical assaults -- which, unlike Bush's, focused on his opponent's proposals and not his character -- somehow seemed harsher. His style and cadence wore thin pretty quick; surely swing voters are contemplating whether they want to listen to his hectoring condescension for four years.

But in general, beyond this message, Bush whiffed. He seemed like a loads nicer guy, but at times laughably unprepared. Sure, his arguments about their differences in principle -- Bush trusts the American people, Gore trusts big government -- resonated, but it was lost amid the din of Gore's incessant mantra about how much the wealthy would benefit from Bush's tax-cut proposal.

When the debate wandered into foreign policy terrain, Bush seemed frighteningly ill-informed and eager to change the subject. Solid arguments and rebuttals he had on education and Social Security were buried deep in the last third of the 90-minute debate.

The Bush team anticipated that Gore would begin assaulting the Texas governor's economic plan, of course, and it didn't take long - until Question No. 1, actually -- before Gore started painting his plan as one that would "use the prosperity to enrich not just the few, but all of our families," as opposed to the plan of a certain Texas governor.

"Under Governor Bush's tax-cut proposal, he would spend more money on tax cuts for the wealthiest 1 percent than all of the new spending he proposes for healthcare, prescription drugs and national defense combined," Gore charged in his second opportunity to speak. It went on and on like that all night.

But beyond calling Gore's numbers "fuzzy" and "phony," Bush never really stepped up to refute the charge; largely, one is left to assume, because it's true. He pointed out that Gore's "targeted" tax cuts indicate a kind of government-knows-best attitude, where taxpayers are rewarded for engaging in what Al Gore thinks is worthy behavior. But he never set about rebutting the Gore bullet point that the vice president fired into him.

"Let me just say, Jim, you haven't heard the governor deny these numbers," Gore pointed out. "He's called them phony, he's called them fuzzy, but the fact remains: Almost 30 percent of his proposed tax cut goes only to Americans that make more than $1 million per year."

Without explaining why Bill Gates deserves a tax cut -- one can imagine an argument about more capital creating more jobs, for example -- Bush seemed content to repeat, rather lamely, that we can afford to give rich people a big tax cut.

"Over the next 10 years it is going to be $25 trillion of revenue and we anticipate spending $21 trillion," Bush stated, "why don't we send $1.3 trillion of that back to the people who pay the bills? Surely we can afford 5 percent of the $25 trillion coming to the treasury ..."

But the first 20 minutes or so of the debate went better for Bush than the transcript would indicate, because Bush just seemed so much more pleasant, occasionally even refreshing. Indeed, Gore doesn't really get how much voters long for more cooperation in Washington, and how partisan he seems, and I initially thought Bush was going to walk away with it. He seemed pleasant and in command.

But then, when it came to those devilish details, Bush faded faster than a pair of blue jeans in Shaun Cassidy's dryer. Describing a family that Bush's prescription drug plan would leave out, for instance, Gore seemed to know more about the plan than Bush did, even directing viewers to georgewbush.com to check it out for themselves. Other issues surfaced that will enable Gore strategists to argue that their man is where the lusted-after voters are on drilling vs. protecting Alaskan wildlife, supporting the McCain-Feingold campaign finance reform bill and appointing pro-choice Supreme Court justices.

On education, Gore embraced so many parts of Bush's plan, any legitimate ground Bush had gained on the issue was lost amid a debate over whether or not Gore was being honest or Bush was just ill-informed about the vice president's insistence that his education program demands accountability.

Then moderator Jim Lehrer asked, if Yugoslav President Slobodan Milosevic "refuses to leave office, what action, if any, should the United States take to get him out of there?" Gore trotted out not only a primer about what's going on, but casually dropped the name of Vojislav Kostunica in a way that was eerily effective, reminding us that if Bush were to be asked about the opposition rival, he would probably say, "Gesundheit."

Bush swallowed hard and tried to argue that the U.S. should lean on Russia to lean on Milosevic. But Gore pointed out that "under some circumstances that might be a good idea. But being as they have not yet been willing to recognize the lawful winner of the election, I'm not sure it's right for us to invite the president of Russia to mediate this, this dispute there, because we might not like the results that comes out of that."

"Obviously, we wouldn't use the Russians if they don't agree with our answer," Bush said.

Bush had his share of effective moments, mainly in pointing out the failures of the Clinton administration to follow through on its myriad promises from '92 and '96 -- such as for a prescription drug benefit for seniors. Or a middle-class tax cut.

It should be pointed out that Bush went the whole evening without any of his usual endearing malapropisms. No references to "tacular" weapons, or pesky trade "terriers," or rogue nations "holding us hostile"; no confusion of "handcuffs" with "cufflinks" or statements along the lines of "Reading is the basics of all learning." For this, he should be happy.

And happy he should be that he faces Gore, a man who reeks of insincerity, of central casting phony pol. Because even though Bush was the one who went personally negative on Gore -- making a reference to Gore's claim to have taken the lead in creating the Internet, and saying that he'd "been disappointed about how he and his administration has conducted the fundraising affairs. You know, going to a Buddhist temple and then claiming it wasn't a fundraiser is just not my view of responsibility" -- Gore's performance still seems less palatable in some odd way. Maybe because his stage persona, especially in debates, is so contrived it borders on insulting.

Sometimes Bush's babblings seemed to be from regurgitated Toyota commercials -- "It's time for a fresh start. It's time for a new look," he said once -- but, incoherence and all, at least when he spoke he was taking microphone time away from Gore. One time Bush even forgot the question, for Godsakes.

But he got away with it, in his kind of charming way, just because Gore was so damn hectoring, so full of himself, so quick to use his intellect for demagoguery so that you never knew what was real and what he had just made up.

Bush was creative with his facts, too, but there's something less threatening about it, maybe because it's just so odd to hear a presidential candidate who attended Harvard and Yale still struggle with his command of the language. (Tonight's feature: his reference to Gore as "Vice President" with no "the" as if that were his name, as in "Vice President thinks this," or "Vice President wants to do that." Very strange.)

Green Party nominee Ralph Nader briefly showed up before the debate, protesting his lack of inclusion, even though he's not even at a third of the 15 percent mark in the polls required to be under consideration for the debates. Nader had a ticket, but the local fuzz and an official from the Democrat- and Republican-controlled Commission on Presidential Debates escorted him away. He didn't miss anything.