Milosevic lashes out as his power disintegrates 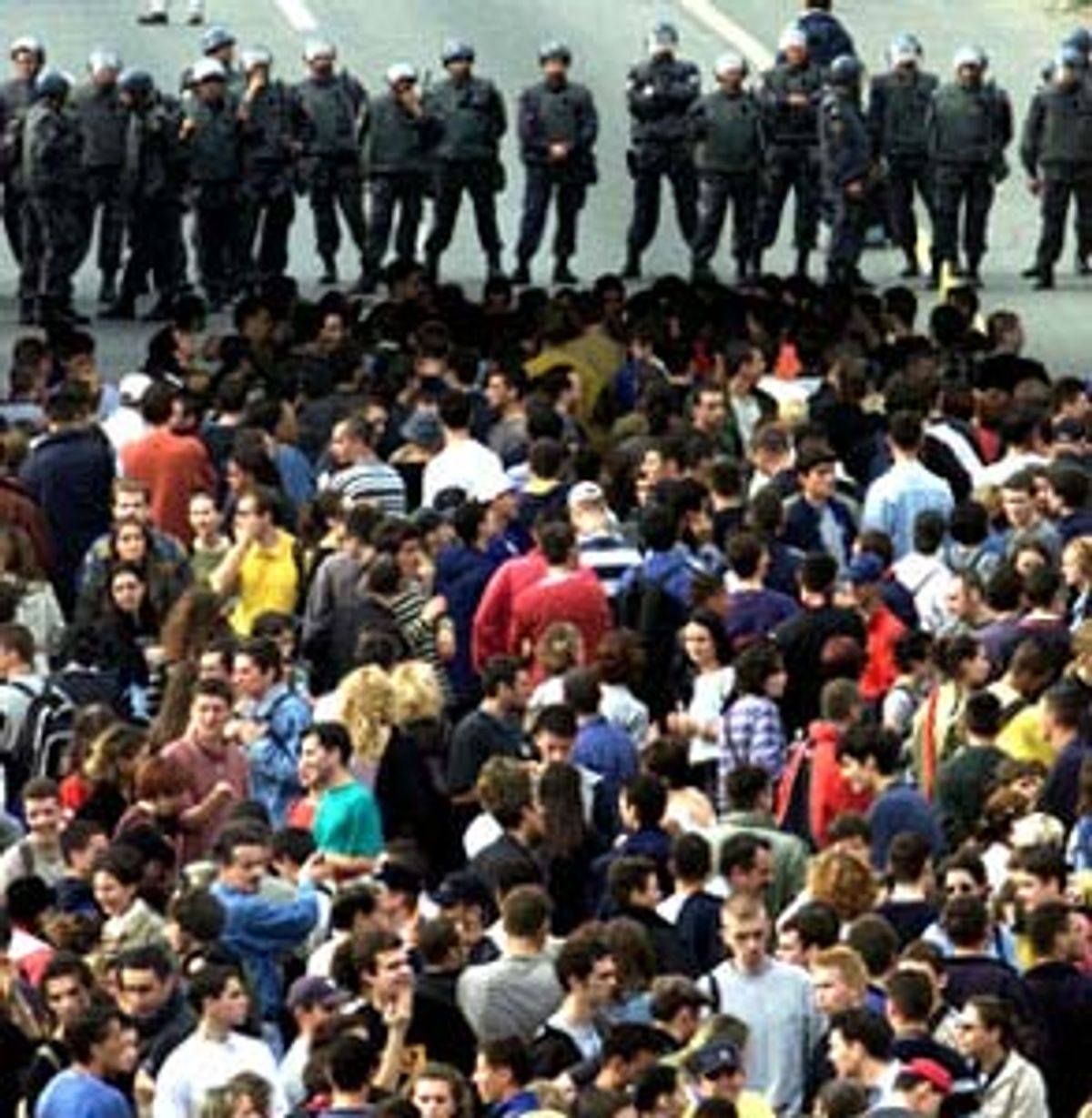 As massive nationwide anti-government strikes and protests spread and intensified in Serbia by the hour, the region seemed to be lurching closer toward violent clashes. On Tuesday, the increasingly beleaguered regime of Yugoslav President Slobodan Milosevic issued an ominous warning signaling an imminent crackdown. Opposition leaders now concede they fear that their so far peaceful protests may meet with greater resistance and, potentially, violence over the next days, as the regime prepares to fight for its survival -- and the opposition does what it can to finish it off.

And in stunning developments at a coal miners' strike at the Kolubara mine 40 miles south of Belgrade, thousands of demonstrators managed to overpower police. With the miners and other ordinary workers joining the opposition's call for Milosevic to step down, the regime faces the historical echo of strikes that brought down Romanian dictator Nicolae Ceausescu in 1989. But the question remains whether the opposition can continue to build critical momentum.

"This is the last chance for a peaceful transition," opposition leader Zarko Korac said Wednesday by telephone from Belgrade. If the Milosevic regime today rejects the united opposition's demand that it recognize defeat and agree to step down, then, Korac says, "Yes, I think it will get violent in Serbia. People will have to answer the regime in the streets. We people have nothing. They have tanks and guns."

The grim assessment came as a Milosevic-controlled court was to issue a final verdict on a complaint filed by Serbia's united opposition. The opposition says their candidate, Vojislav Kostunica, decisively won Yugoslav presidential elections September 24 in the first round, with more than 50 percent of the vote. A regime-controlled election commission had earlier said neither Milosevic nor Kostunica got enough votes in the first round, and that they should stand in a runoff scheduled for Sunday.

Late Wednesday Yugoslavia's Constitutional Court, after meeting in emergency session, announced that some of the presidential vote count was invalid and would be annulled. But the court did not specify which parts of the vote count were affected. Opposition leader Goran Svilanovic rejected a possible court decision that would call for rerunning of the first round of presidential elections.

"Definitely, there will be no second round for us," replied Dragor Hiber, a member of the united opposition's legal committee. That group met early Wednesday to finalize their strategy for bringing Serbia's political crisis to conclusion.

"From now to Saturday we will increase our protests and strikes. Tomorrow is 'D-Day' for our protests," Hiber elaborated. "We will bus hundreds of thousands of people from the provinces to Belgrade on five routes, with leaders of the opposition at the head of each column. Our idea is to entirely block Belgrade and to wait on the streets until Sunday" when Milosevic intends to head into the second round of elections. "We think if we have patience we can peacefully break the institutions of violence which the regime controls."

As the situation rapidly seemed to be spinning out of his control, an increasingly desperate Milosevic lashed out Tuesday, with ominous threats to force strikers to go back to work. Police in Belgrade arrested more than 50 demonstrators and strikers Tuesday, including the head of the public transportation union, and immediately sentenced many of them to jail for up to 60 days. Yugoslav authorities also announced a criminal investigation of two opposition leaders and 11 union strike leaders, whom they accused of sabotage and illegal abuse of the right to strike.

"The violent behavior of individuals and groups which are a threat to the lives of citizens, which prevent the unobstructed functioning of traffic, prevent normal work in factories, schools, institutions and healthcare institutions will be treated under the law," said a Serbian government statement issued late Tuesday, which was carried by state media.

But, in a sign of eroding loyalty to Milosevic from once-obedient officials, the investigative judge assigned to pursue the case against the 13 strike leaders refused Wednesday, according to local news wires.

Of particular concern to neo-communist Milosevic is the turning against him of his longtime former power base among Serbia's "proletariat" -- factory workers, trade unions, waterworks and power grid employees and coal miners. Along with tens of thousands of striking workers across the country, 7,500 miners at Kolubara, which is Serbia's largest coal mine, have been on strike since last weekend, causing severe power shortages in Serbia. Belgrade experienced some eight hours of rolling blackouts Tuesday and Wednesday as a result of the strikes.

The coal miners' revolt has come to symbolize and inspire the larger nationwide uprising against Milosevic. Analysts believe that Milosevic's fear at his plight has risen dramatically at the prospect of the striking Kolubara coal miners, who refused the personal pleas and threats of his top general Nebojsa Pavkovic to go back to work overnight Monday.

The drama at the Kolubara mines seized the imagination of Serbia Wednesday when 30 busloads of police were deployed to try to break the strike. In a matter of only a few hours, thousands of ordinary Serbs came from Belgrade, Cacak and other towns to give their support to the striking miners. Journalists in the area say the number of people soon overcame the police. Demonstrators used construction equipment, cranes, a tractor and the sheer force of their numbers to break through six lines of police cordons to join the miners' strike committee.

"Unlike earlier protests, the most important thing this time is that factory workers joined in," writes Belgrade analyst Bratislav Grubacic in VIP News Wednesday. "The regime is very sensitive to workers' protests ... especially afraid of the miners' strike at Kolubara near Belgrade. Many in the regime get nervous when reminded of the role miners played in toppling the authorities in Romania."

The Kolubara coal mines, in the town of Lazarevac, have become the Gdansk of Serbia's anti-Milosevic revolution. Analysts point out that in neighboring Romania, the moment when coal miners joined the revolution against the Communist dictator Nicolae Ceausescu proved to be the turning point, after which he fell and the mob executed him and his wife.

"We have again won here," opposition leader Zoran Andjelkovic told independent Radio B292, after the people broke through police lines at the Kolubara mines. "We succeeded in coming round behind the police and breaking through the cordon with a construction machine. The people then followed through and we basically followed that bulldozer into the administrative building [where the strike committee is]. Believe it or not, but there are now between 15,000 and 20,000 people at the mine. They are coming in cars and on foot."

What had earlier in the day seemed a possible setback for the opposition at the Kolubara mines turned in a matter of hours into a potent symbol of the Serbian opposition's growing sense of strength and self-confidence in the face of an increasingly impotent regime. The people's thwarting of the police at Kolubara marked the most decisive event to date of the past 10 days' effort by Serbs to resist intimidation by the regime.

One of the strike's organizers, Nebojsa Covic, who regime authorities had threatened yesterday with arrest for "sabotage," said the police cannot possibly arrest all the people in Serbia who were taking part in the uprising.

"This is not an attack against me, it is an attack against people," Covic told Radio B292 of the announced criminal investigation against him Wednesday. "They can perhaps arrest me, but they cannot arrest all the people who do not want them anymore. If my responsibility lies in that I offered support for the justified anger of Kolubara miners, I am prepared to be taken to account, but not by this regime, which is illegitimate."

He continued, "I hope that the people in the state prosecutor's office and the judiciary who carry out such dirty orders of the bankrupt authorities are aware that they will inevitably have to face the people against whom they are now taking such measures."

Covic is a former mayor of Belgrade and high-ranking member of Milosevic's Socialist party who crossed to the opposition side during anti-government demonstrations in 1997. He has a deep insider's knowledge of how Milosevic's communist-style machine is held together. He appears to know how to bring it down as well -- as the Kolubara strikes he helped organize riveted the attention of the nation Wednesday.

Despite the opposition's success at holding back the police at Kolubara Wednesday, some analysts say it must adopt more confrontational tactics in order to get the regime to break quickly.

"The opposition has to be much more aggressive than it has been up till now," one well-informed Serbia watcher in close touch with Serbian political figures, who asked to remain unidentified, said Wednesday. "If you take people to the streets, you have to take them all the way to the end. Take over public buildings, take over TV stations. You have to get beyond the carnival atmosphere and bring it to swift completion. Civil disobedience is fine when people are angry and motivated. But when people lose sight of the goal, they get confused" and the movement loses crucial momentum.

"If the opposition can gain more leverage in the next two days -- and the next day is critical -- then I am optimistic that Milosevic might recognize Kostunica's victory," the Serbia observer adds. "It has to rock the confidence of Milosevic."

But if not, "Milosevic has some other options. He will go through the second round of elections and declare himself the winner. And then there will be a real crisis of legitimacy in Serbia," and Milosevic could remain in power for months.