Pediatrician and ethicist Joel Frader says that just because a family has had a child to provide a bone-marrow transplant for an ailing daughter, it doesn't mean custom-ordered kids are right around the corner. 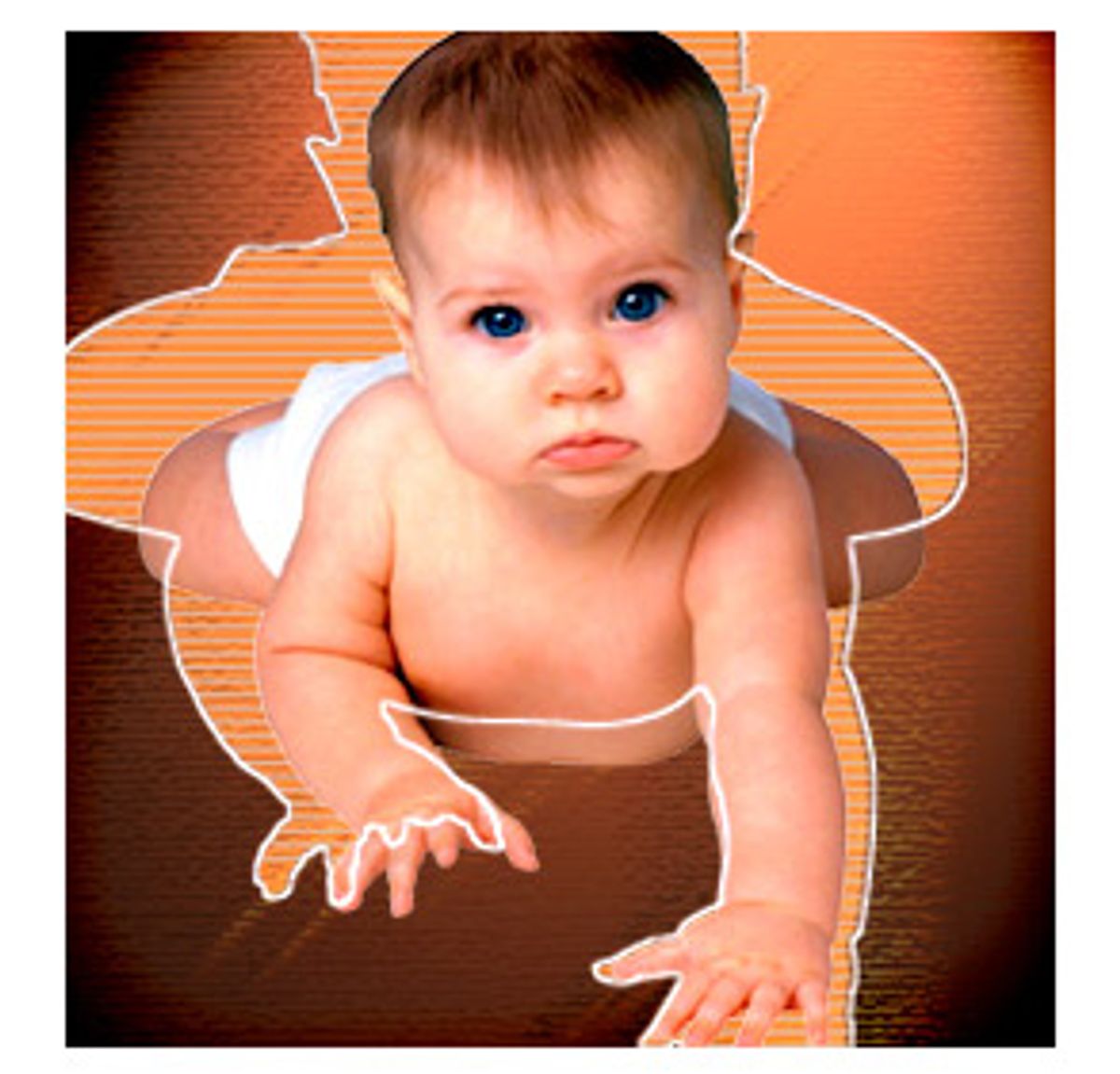 Anyone with a heart can understand Lisa and Jack Nash's desperate desire to do something -- anything -- that could save their daughter's life. Six-year-old Molly suffers from Fanconi anemia, a deadly, genetic immune-system disorder, and a bone-marrow transplant from a matching donor is her only chance for survival. Doctors at the Reproductive Genetics Institute, a reproductive technology clinic in Chicago, told the Denver couple that the most effective method for finding a match was to have another baby, whose umbilical cord could then be harvested for the vital stem cells that Molly needed. So that's what the Nashes decided to do.

It's how they did it that has raised eyebrows. When Adam was born Aug. 29, doctors at the institute knew two things beyond a doubt: that he didn't carry the Fanconi anemia gene and that he was a perfect genetic match with his sister. They knew because Adam -- or rather, the embryo that became Adam -- was selected as the most compatible potential donor from among several eggs fertilized in vitro specifically for this unusual embryo "competition." Doctors at the University of Minnesota performed the bone-marrow cell transplant on Molly last month. The outcome remains uncertain, but the procedure has a good chance of providing her with a functioning immune system.

This is not the first time parents have had a baby under such circumstances. A decade ago, Mary Ayala of Walnut, Calif., bore a second child in hopes of saving the life of her teenage daughter, Anissa, who suffered from chronic myelogenous leukemia. The case drew widespread media attention and sparked a heated debate about the ethics of the Ayalas' decision. Today, however, both Anissa and her younger sister, Marissa, appear to be healthy and happy, and they say they share an unusual bond. "If it wasn't for her, I wouldn't be here," Anissa said in a recent interview with the Daily News of Los Angeles. "And if it wasn't for me, she wouldn't be here, either."

Since then, dozens of other families have conceived babies as potential donors for older siblings. But those decisions seem tame when compared with the Nash case, which is believed to be the first in which several embryos have been harvested solely in an effort to choose the best match.

Is the successful search for a satisfactory embryo simply a glorious medical miracle or does it move us dangerously close to a morally questionable realm of genetically designed children? Dr. Joel Frader, a pediatrician at Children's Memorial Hospital in Chicago and professor of pediatrics and medical ethics at Northwestern Medical School, spoke with Salon about this latest step toward customized kids.

What are your initial impressions about the Nash case?

It's interesting because if you look at this particular case it's hard to identify anything that you could clearly describe as a wrong or harmful to anyone. Some people could claim that the embryos not used were harmed, but we're only talking about groups of eight cells. It's clear that Baby Adam hasn't been harmed. I think one has to assume -- and I see no reason to believe otherwise -- that Baby Adam is going to be loved and cherished in his family, maybe even more, especially if the transfusion works. Decisions to have babies are usually fairly complicated decisions. Among the legitimate reasons to have babies, to help others is not a bad decision.

Is it common for families to bear a second child to save the elder sibling?

We don't have a lot of good data about it. It certainly isn't precedent-setting here, as the Ayala case can attest. In fact, there are several companies that are now responsible for harvesting and storing cord blood from normal babies. What happens in these cases is that the obstetrician collects the blood and umbilical cord and then it's stored. The parents then pay an annual storage fee, and can use it when needed. This may be a resource for others needing a stem cell transplant.

What are the chances Molly Nash's life will be saved by this procedure?

If you take 100 similar cases, if the siblings are genetically matched, in 80 or 85 out of those 100 cases the bone marrow will establish itself successfully. Now, if a child is born without genetic testing and preselection, there is a 1-in-5 chance that the two siblings will have the same genetic markers. If the markers aren't the same, the chances of a successful transfusion are about 30 in 100 cases. But we don't have much research, so it's hard to say exactly what Molly's chances are -- it will either work for her or it won't.

There are medical ethicists who argue this case is a harbinger of genetically engineered babies, and that the concept of preselecting desirable traits can be troublesome. Do you agree?

I object to the wholesale use of the term "genetically engineered baby." One is taking advantage of what is there naturally. They aren't manipulating anything, they are selecting what is most desirable. The reaction seems to be that this is easy to do, and it's not: It's expensive and horribly inconvenient for the woman to have her eggs harvested. You would have to give a woman drugs to induce a ripening of a bunch of eggs at once and then the woman would have to have the eggs removed laproscopically and then you have to go into the laboratory and use the father's sperm and the eggs that you've collected. Then you would have to make a bunch of embryos which you then test. This is not something women are going to do casually. It's not something you just go and do in the bedroom at night. And I don't envision it getting much easier in the near future.

The important distinction to make here is this: What happens in each case? Is there any reason to see harm or wrong? Can we distinguish that from situations where people have less compelling reasons to have a baby? Obviously, having a blond, 7-foot baby who will become a great basketball player isn't the same thing as the Nash case. It somehow diminishes persons generally, because it doesn't cherish what would happen naturally. That is troublesome.

What is it about this technology that makes us uncomfortable? Like you said, many people have children for much worse reasons ...

We are uncomfortable about the practices in China and India about more boys surviving infancy than girls; or the selective abortion of female fetuses or their infanticide once they are born. We do worry that there is a tendency among people to select for characteristics of children that sometimes seem undesirable or wrong. And this technology opens up the possibility of specifying what we want. There ought to be a difference between ordering from the menu and cherishing that which nature provides.

I think it would not be good for humankind if we were to get to the point of ordering up designer babies based upon our preferences of the characteristics. There is something morally troublesome about that. The question is: Can we as human beings exercise good judgment and say, "We're not going to do that"?

Do you think we, as a society, will be able to exercise that discretion?

At each point, we have an opportunity to exercise human judgment about how we are going to use available technologies and we don't always do the wrong thing. We've had atomic weapons available for 50 years now and they have been used once -- during World War II. There are a lot of things that we don't employ on a regular basis.

How close are we to having custom-order technology?

I think we are a long way from ordering from the menu -- eye color, hair color, body habitus, intelligence, temperament and so on. The important question is how soon will the Human Genome Project reveal information we can use in this way? Within a few years, we will know what each gene is, but it's many years between having the distinct genes isolated and knowing what each of those genes do. And it's even more years away from using that genetic information in order to create children that are going to have specific characteristics.

Should we draft policies or laws to curb the more questionable medical technologies?

We don't have good mechanisms and procedures allowing us to evaluate these cases and we definitely need them. This is far too important to be left up to doctors individually. This should be a matter of policy. It touches upon two areas that provoke much debate: One is the area of reproductive freedom. The other issue is really important, which is that we want to have an atmosphere in society where we respect differences, where we cherish all children who are born regardless of abilities or disabilities that they might have, and what we worry about is situations where we have babies being born because of the characteristics they have. It smacks of slavery and skin color concerns. And it should be discussed.

It's probably a good idea to avoid specific laws that govern particular medical practices because the world changes and the law has difficulty keeping up. And the law is typically a fairly blunt instrument and doesn't adapt well to nuances in medical practice.

As you said, parents have kids for all different reasons. Is there a difference between having these kids to save a child's life or to weed out an embryo that may grow up to have a serious disease?

People are using this technology to avoid having children with diseases. Technology allows us to see the baby that would result with the continued growth of that embryo; if that embryo would have Tay-Sachs disease or cystic fibrosis or some other disease that would entail substantial suffering for the baby. Many people are using this technology in this way already. That doesn't involve the additional motivation of helping their family member. I don't see a moral objection to avoid having children with serious diseases.

Some people object to this destroying of the embryo. They believe it is somehow harmful to those entities, those bundles of cells. I don't buy that. I don't believe an eight-cell entity deserves protections. If you identify that the embryo has a serious disease, I have no moral qualms to not use that embryo and permit it to go on to be a baby. Once you have a baby, it seems to me that it's a whole different circumstance and one has different kinds of obligations toward that live, born baby.

What kind of message does that send to people who have serious diseases or mental disorders?

That's a claim the disability rights community has been making. I understand it, but I don't think it makes sense. Because as a parent to choose to not have a cluster of eight cells develop into a particular child with a gene disorder, it doesn't mean that I won't be entirely respectful and supportive of people who are born with that problem. I don't think it's a necessarily logical question.