I'm straight and a father but I can't help luxuriating in the lustful looks I get from gay men. 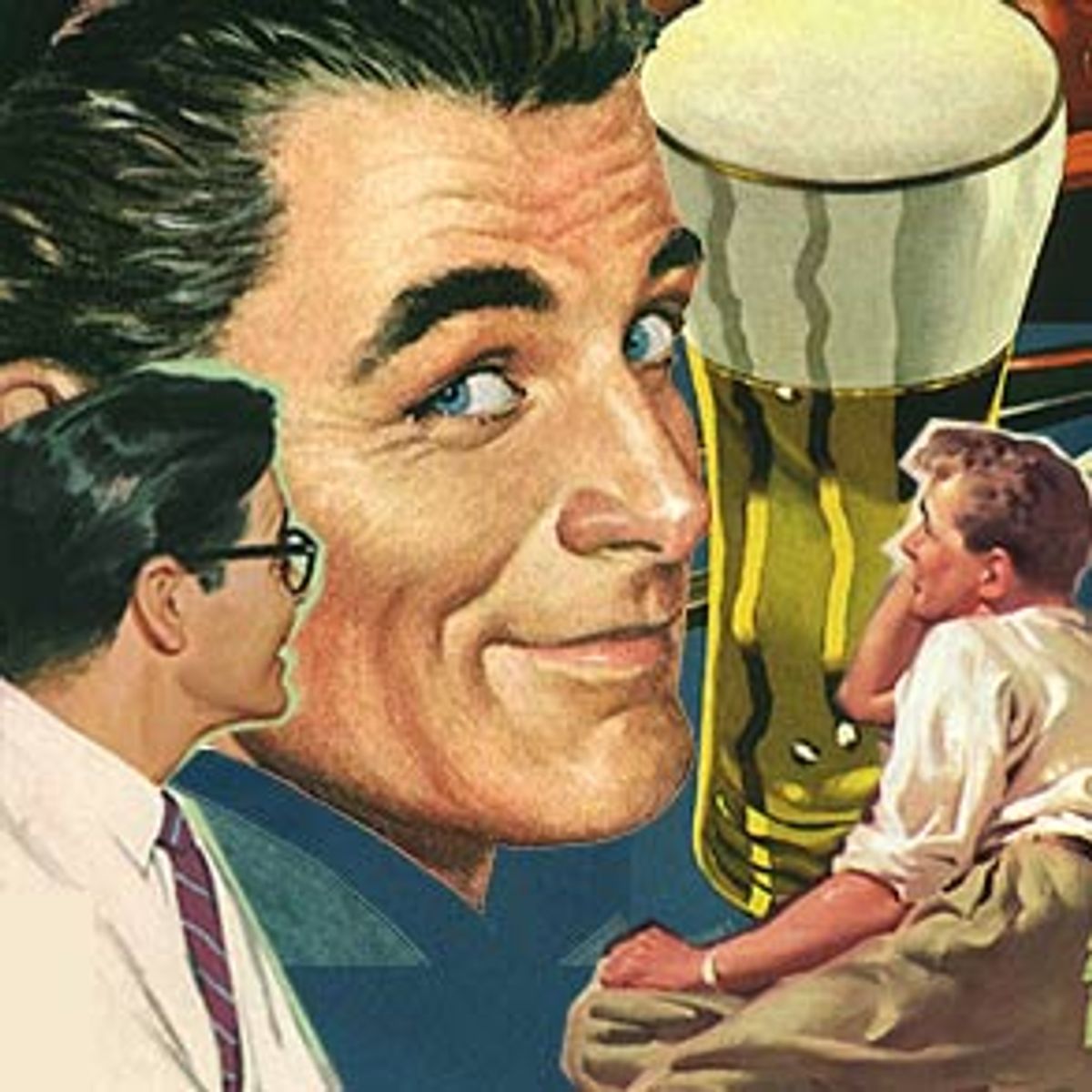 Gay guys like me, and I like being liked by gay guys, even though I'm not gay. Let me explain.

When I'm out on the town in my home city of Washington, I often end up in the bars, bistros and boozy hangouts that dot the largely gay residential neighborhoods of Dupont Circle and Capitol Hill. When I'm lounging in those places, I tend to receive a lot of lingering gazes from the men who gather there. I know this sounds vain, like some imaginary attraction I've dreamed up to feed my ego or some homophobe's feverish paranoia, but other people -- my wife, my friends -- have noticed, too, how a room's collective "gaydar" tends to swing my way when I roll in.

It's worth mentioning, to shed some light on the phenomenon, that I possess the full array of borderline feminine attributes -- fine bones, fair hair, slim hips, full lips and long-lashed eyes sunk into a baby face -- that folks often round up under the rubric "pretty boy" or, to use an even less p.c. label, "queer bait." If a sketch artist were asked to draw a composite of the archetypal latter-day homosexual, he or she would probably render an image of someone my own mother would mistake for me. That I absolutely look the part may go a long way toward explaining why gay guys latch their eyes onto me so automatically and repeatedly.

At times the approach is direct. I've had my share of straight-on, unequivocal propositions. In the shadowy hallways of smoky, back-alley pubs and in the strobe-lit glitter of downtown dance clubs, I've been offered every type of sexual favor. I've been asked to perform them, too. The range of approaches is as varied as a rainbow's colors. One guy walked right up to me through the sonic aura of a nightclub's thumping music and, in a very polite, soft-spoken way, asked if he could touch my nipple. (I hiked up my shirt and obliged, sort of charmed by his gall. But to further requests, I said no.) Another guy, a middle-aged businessman puttering along 18th Street in his Buick -- and mistaking me, I guess, for a cruising whore as I strolled down the sidewalk -- pulled to the curb and, through his rolled-down window, said simply, "Blow job?" This was around Christmastime, and it was unclear whether he wanted to give or receive. Either way, I waved him off with a cheery "No, thanks."

The world tells us that most straight guys feel threatened by this kind of attention from homosexuals, or shocked by it, or pissed off. We've all heard the news reports of enraged homophobes kicking the shit out of queers who approached them. The names of the martyrs make for a substantial roll call, and every time a gay man levels an evocative gaze at a stranger, it's a roll of the dice. Yes or no. Acceptance or infuriation. Sex or death.

But here's the thing. I actually quite like the attention. I dig it, I savor it. Even as a true hetero's hetero, one of the sexual marketplace's all-time straights -- a collegiate girl chaser, now a faithful husband and a breeder to boot -- I'd be shaving the truth if I didn't admit that I enjoy and even luxuriate in the lusty gazes of the gay men who are forever eyeballing me, so to speak. When I'm in one of those queer hangouts, I find myself primping in the men's room mirror -- mussing my hair to get it tousled just so, tilting my head to catch the glow from the bar's halogen lamps in the hollows of my cheeks, doing anything to make myself look more fetching. And I always feel a little rush of adrenaline when the heads turn, when the eyes lock on me. Gay guys, with their admiring glances, make me feel stunning. I become beautiful in their regard.

Nobody, no straight man or woman, can communicate with the eyes as clearly and explicitly as a gay man can. Maybe all those long years of repression and discrimination, of being in the closet, have bred in gay men this ability to communicate so eloquently, in a single glance, the language of desire. Call it the gay male gaze. In all my years playing the straight market, I've never once received from a woman the sort of absolutely unmistakable, unambiguous "I want you now" message that I get from homosexual men. Women get that predatory look, that ravenous scrutiny, from men all the time, and gay men give it to one another. And even though some of those men and most of those women would claim that they dislike the unwanted attention, I'll bet some secretly relish the feeling of being pursued. It's an ego boost to feel so deeply desired, so flagrantly wanted.

Sadly, the majority of straight men never get to experience the exhilaration of that preyed-upon feeling. Women tend to seduce their men with a strategic concoction of coy glances, oblique come-ons and subtle come-hither body language, a method that offers the guy on the receiving end a different kind of gratification -- more diffused, milder, though still satisfying. But it's nothing like the rush you get when someone makes plain, through a steadfast, ogling gaze or a few well-chosen words, his desire to fuck, or be fucked by, you. Women occasionally take the straightforward route, and straight guys stumble their way through. But gay guys are the kings of candor.

Before the assumptions start piling up, I should make the point that I've never wanted to get it on with another man -- I swear on my wedding ring. Against all charges of repression, I maintain that shagging guys is just not my bag. Any ambivalence I might've had on the issue was laid to rest the moment a man kissed me. This formative event happened at the end of a long, sweaty, gin-soaked night at a dance club, as I was saying farewell to half a dozen gay friends. One of them, in a swaggering show of cocksure one-upmanship, stepped out of the pack and locked his lips on mine.

Expecting a peck, I got a whole lot more. And it all felt so wrong -- his strong hand clutching the back of my neck, his tongue pushing roughly against mine, the scratchy friction of his stubble rubbing against my stubble. The off-putting experience of that one kiss crystallized my heterosexuality for all time.

But to this day I like it when men pay attention to me, and there's no paradox in that. What I like about the admiration I get from gay men is exactly that, and only that -- the admiration. If all beauty is in the eye of the beholder, all attractiveness is in the mind of the beheld. You're only as alluring as other people make you believe you are, and an evening in the gay district sends me home feeling like the object of all desire the night has to offer.

So what does that make me? A tease? An ingenue? A manipulative straight guy who feeds on the attentions of gay men to shore up his sometimes shaky self-esteem? Or am I just an innocent opportunist? An accidental tourist in homoland, one who wandered onto the gaydar screen and, enamored by the sweep of eyes over his body, decided to linger?

Let's say all of the above.

John Dexter (a pseudonym) is a writer in Washington, D.C.