She is brazen and wild, an untamed, sensual creature perfect for TV. 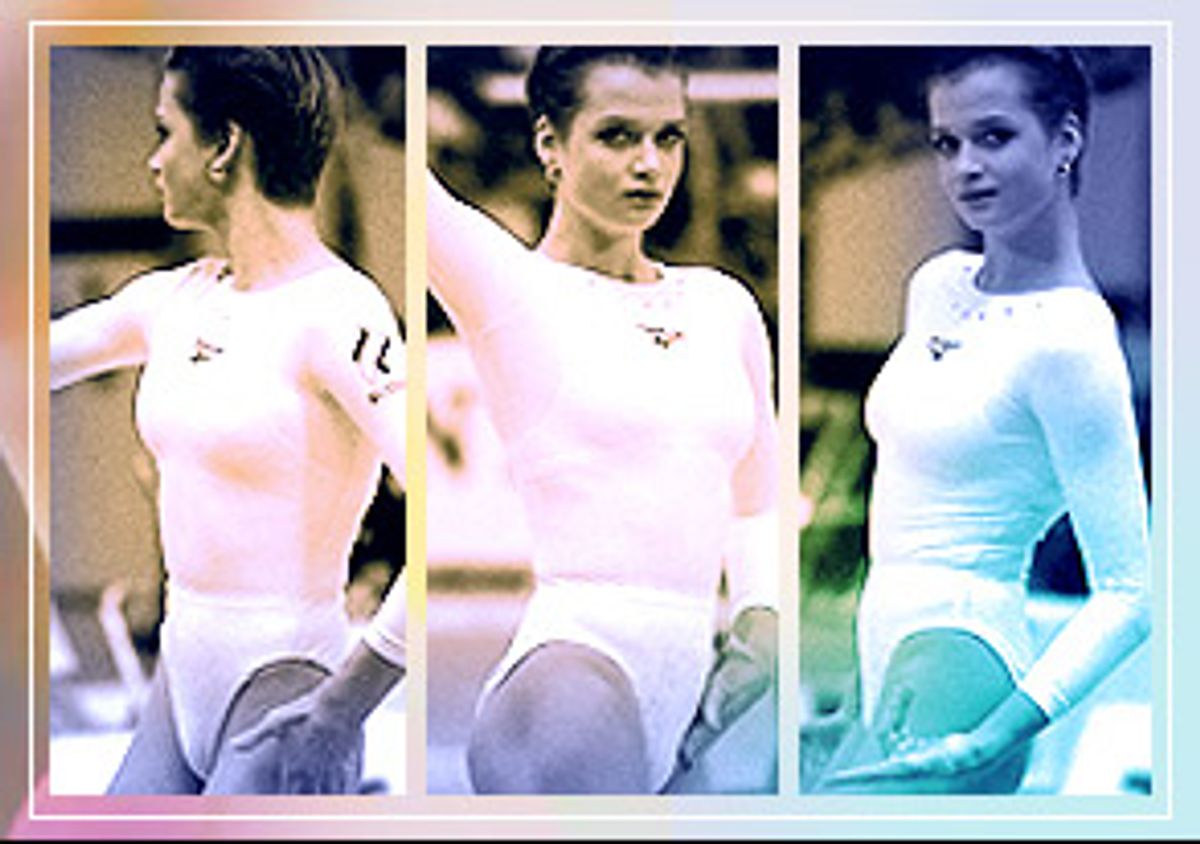 After seeing the dramatic Svetlana Khorkina competing at the recent Sydney Olympic Games, it struck me that such a brazen, athletic female star for the '00s should have her story told, with a kind of "Valley of the Dolls" sensibility I'm sure would really go over with women ages 17 to 38 (or your target demographic). The following is my pitch for "Golden Heat: The Svetlana Khorkina Story," loosely based on the Russian gymnast's actual biography.

Fade-in: The middle of Red Square in Moscow, 1983. Sveta, a tiny, 4-year-old girl wearing a red coat with black fur trim, is happily doing cartwheels while her biological father, Vassily, a friendly, lovable Gerard Depardieu type who makes wooden toys and sells them from his modest cart, looks on proudly.

"Here Sveta, for you," he says, handing her a wooden doll with yellow yarn hair. The young girl is delighted.

"I'm sorry it cannot be the expensive Barbie toy from the America," he adds apologetically.

"No, Papa! She is beautiful! I name her Olivia Newton-John!"

A group of black-clad secret police watches the youngster twirl with joy. "Yuri," says one of them. "The little one, she is strong and brave. Let us take her to the camp."

The black-clad men seize the child. "Papa!" she cries, as Olivia Newton-John falls to the ground and her head breaks like an egg, the onion-domed turrets of the Kremlin looming in the background.

"Sveta!" Vassily cries hopelessly, watching with communist angst as his whole life is stolen away by the KGB.

Cut to the camp: Svetlana is scrubbed mercilessly with Boraxo by rough-looking matrons and presented in her underpants, crying, to coach-for-life Boris Pilkin.

"She could grow too tall," says Boris to his wife later that night.

"Take her, Boris. Make her a champion," says his wife. "Perhaps since she is too tall, she will suffer even more gratefully."

Montage: Other girls laughing and throwing frozen manure clods at Sveta, jeering at her for being too tall. Sveta, with the other girls in the camp, being force-fed huge horse pills by matrons firing them down their throats with a primitive blowgun apparatus.

Boris punching the little girls as hard as he can in the stomach, one by one. Boris putting C-clamps on Sveta's shins so they don't grow any longer. Sveta being shoved head first by Boris into the ice that has formed on a trough of water. Sveta picking fleas out of her borscht. Sveta being pursued by wolves in the snow while wearing nothing but a string of kielbasi, Boris laughing in the background.

The little girls tending to one another's black and yellow wounds in their makeshift, "Little Rascals"-esque infirmary -- applying chicken fat and old, torn sheets to their foot gashes, skinless hands, snapped ligaments and broken ribs, while singing mournful Russian folk songs for comfort. It should be clear by the end of the montage that Sveta has become the leader of the pack of sad, strong little girls.

Cut to later: The 1999 World Championship gymnastics competition. The 20-year-old Sveta (think Calista Flockhart with a crew cut) is wearing a long, red, backless ball gown, and hoisting a martini in the air.

"Olives," she says, spitting vodka into Boris' face. "More goddamned olives. I said to you I wanted my vodka very dirty."

"Dirty like your men, Sveta?" asks the wizened coach/father figure.

"Wouldn't you like to watch?" asks Sveta, archly, tossing her newly printed Russian Playboy centerfold under his nose. She punctuates the gesture by crushing out her cigarette on the arm of a couch.

"Sveta!" he shrieks, crossing himself, shielding his eyes from her topless photo.

"What, you don't like to see it? Then you are not a man," she warbles. The gruff coach storms out of the room, just as she rips the gown off her body with her strong, tiny arms. She looks at herself naked in the mirror, at her tall, impossibly thin, muscular frame, and addresses one of her minions, a younger gymnast. "I am beautiful, yes, Olga?"

"Yes, Sveta," says the frightened child, biting a splinter out of her palm. "I am going to always be win," says Sveta, forcing a diamond earring stud through her own nipple, unflinchingly, and giving herself a smile of assurance.

Later that night in the competition, Sveta advances to the parallel bars -- her strongest event -- but, after several mind-boggling swoops through the air, misses the bar and falls miserably onto her knees. She stands on the mat, humiliated, her sequined leotard torn at one shoulder, rivulets of body glitter streaking down her cheeks along with her tears.

"As Jesus is watch me, I will never, never," she growls, clenching her fists, "never let one of those little bitch win me at the event again, as long as I am alive. I will eat her face."

Thunderous music. The crowd applauds for Sveta despite her terrible failure. Sveta beats her breast and bites her cheek hard enough to enable her to spit blood at the audience, cursing them all in Russian: "May you have four generations of harelipped children!"

One of Sveta's young protigis wins a separate event, against her. Crying with joy, the younger girl runs to Sveta for approval. Sveta whispers: "Go away from me and die, you tiny whore." She smiles and hugs the confused girl for the cameras.

Later, back in the camp dormitory, Sveta heats up the girl's medal in the fireplace and makes her hold it in her hand, crying, until her skin smokes from the burning.

"No, Sveta, never," whimpers the child.

Sveta sneaks out that night with her new paramour, one of Moscow's motorcycle-riding black-market thugs, his mouth full of gold teeth.

Cut to her later that night in a jealous, drunken fury, waving a pork chop with one hand and half a bottle of vodka in the other, shouting, "Nobody fucking will win me again!!!"

She throws the meat and drink on the ground with a smash and leaps onto a nearby statue to do a triple aerial. While landing, she slips in her stiletto heels on the cobblestones, and hits her head right next to a broken children's toy. She flashes back to the fateful day when her gymnastics career began.

"What is it, Sveta?" asks Vitoly, the swarthy black-market brute.

"Nothing. Let us go make sex into an alley!"

The two zoom off on his motorcycle. Montage of unbelievably contortionistic sex, combined with other rebellious actions. Svetlana, trying to jump the Volga River in an imported Ford Fiesta, crashing. Svetlana attending a state ceremony and doing a series of flips down an aisle lined with elderly dignitaries, wearing no underwear. Finally, Boris, in abject exasperation, throws her against the wall. She spits in his face.

"Sveta!" he shouts. "Don't you see? You are symbol of hope for the Russian people." Svetlana's eyes fill with tears.

"I am a symbol of hope," she repeats, bewildered. The film concludes with footage of her stunning victory at the Sydney Olympics, with Svetlana lip-syncing a Mariah Carey power jam ballad while performing her floor exercise.