At the vice presidential debate, the two candidates show their younger bosses how to keep it clean. 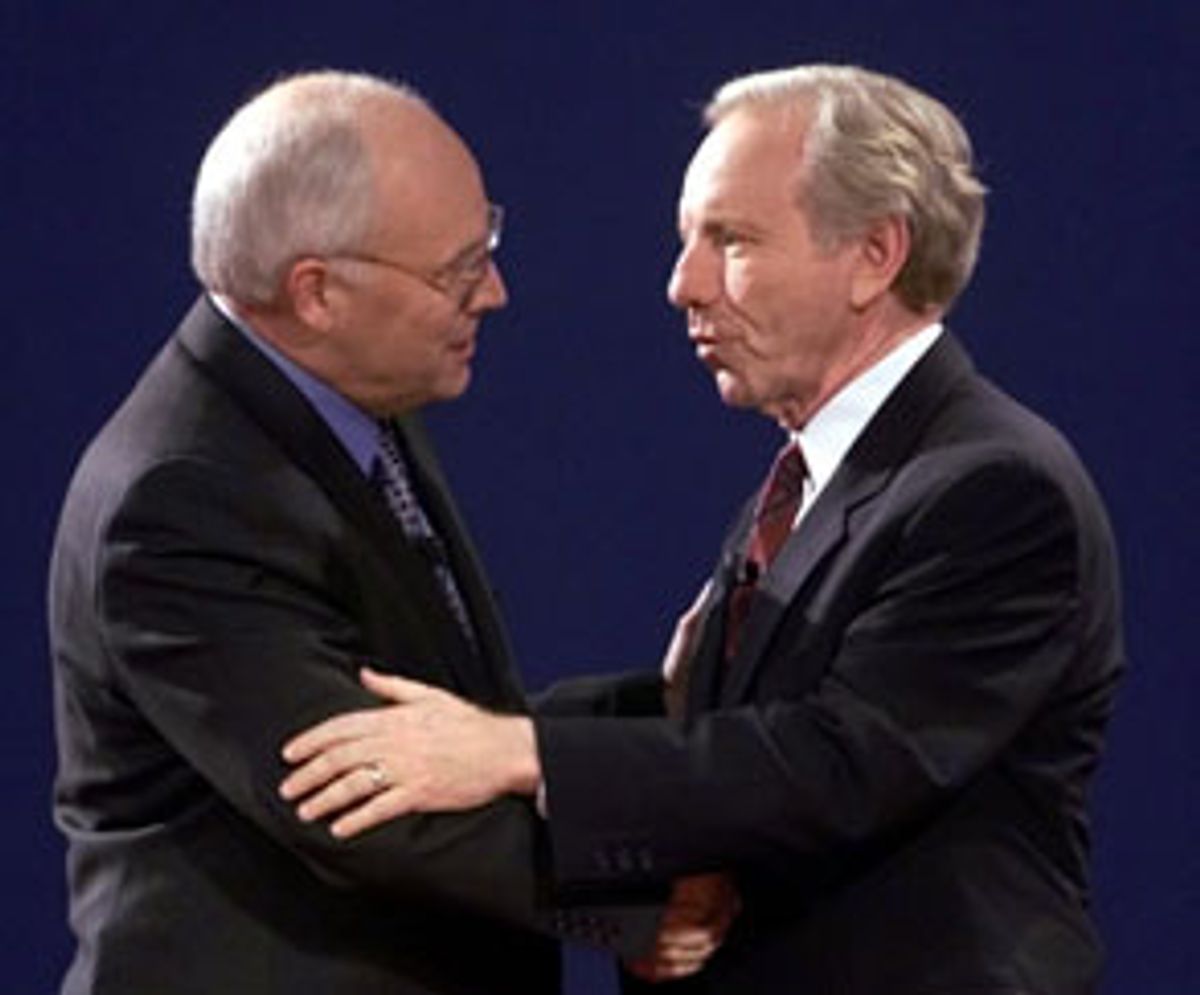 Cheney was prepared and smart; Lieberman charming and human. Thus, their running mates seemed all the less so.

It wasn't obvious that the night would go down like this. One Cheney flew into Kentucky full of piss and vinegar. "We got two good men, sheriffs, riding in out of the West and they're going to kick the bad guys out of town," promised his wife Lynne.

But the shots came more subtly than those fired in anger by the demure Mrs. C, though both Cheney and Lieberman got their licks in between their with all due respects.

Both came loaded for bear. Lieberman had a slew of Cro-Magnon, hard-right-conservative votes from Cheney's House career, where he was only a handful of voters to oppose restrictions on armor-piercing "cop-killer" bullets and undetectable plastic guns.

But he didn't bring them up. He didn't even mention, when home heating costs were brought up, Cheney's opposition to one of Bush's favorite programs, the Low Income Home Energy Assistance Program, which he voted against almost a dozen times in the 1980s.

"I have great respect for Dick Cheney," Lieberman said. "I don't agree with a lot of things he said in this campaign. He was a very distinguished secretary of defense and I don't have anything negative to say about him."

As expected, Cheney fired most of his shots at Gore. But -- when asked by the moderator, CNN's Bernard Shaw, if he'd noticed "a contradiction or hypocritical shift by your opponent on positions and issues," Cheney said, before laying into Lieberman, "We've been trying very hard to keep this on a high plane, Bernie."

"I do have a couple of concerns where I like the old Joe Lieberman better than I do the new Joe Lieberman," Cheney said. "Joe established an outstanding record, I thought, in his work on this whole question of violence in the media and the kinds of materials that were being peddled to our children, and many of us on the Republican side admired him for that."

"There is, I must say, the view now that having joined with Al Gore on the ticket on the other side, that the depth of conviction that we had admired before isn't quite as strong as it was, perhaps, in the past," he said, turning to Leiberman. "You're not quite the crusader for that cause that you once were."

Cheney later took on Gore for not being able to work in a bipartisan fashion.

"Dick Cheney must be one of the few people who think nothing has been accomplished in the last eight years," Lieberman said. "Promises were made and promises were kept. Did Al Gore make promises in 1992? Absolutely. Did he deliver? Big time," Lieberman said, laughing in his geeky-dad manner at his reference to Cheney's response to a much-publicized off-color remark by Gov. George W. Bush caught by TV microphones last month.

Cheney gave as good as he got. After Lieberman said, "I'm pleased to see, Dick, from the newspapers that you're better off than you were eight years ago, too," Cheney said, "The government had absolutely nothing to do with it."

Lieberman added, "I can see my wife and I think she's saying 'I think he should go out into the private sector.'"

"I'll help you do that, Joe," Cheney smiled.

Their smooth presentations were tailor-made for the suburban swing-state undecided voters. Lieberman invoked a heavenly entity seven times, slightly edging out the number of times he underscored his bipartisanship with mentions of Sen. John McCain, R-Ariz. -- three -- all the while boosting his running mate.

For his part, Cheney was strong, serious, knowledgeable, strolling down the Gulf War days of yesteryear, soft-pedaling -- deceptively, one might say -- his ticket's opposition to abortion and gay rights. Cheney could be seen as the winner of the debate, at the very least in the sense that -- for a night, anyway -- he redeemed himself from the dud-ness that has been his candidacy.

The truth of what the two of them said, however, is a different matter.

As shouldn't be surprising, since they were brought in to shore up their boss's weaknesses, Cheney added heft to Bush's intellectual capital and Lieberman hid Gore's clunky artifice with his genuineness and sincerity.

Few question Cheney's foreign policy knowledge -- unlike that of his boss, who has confused Slovenia and Slovakia -- so it made sense for him to attempt to defend Bush's statement on Tuesday night that it "would be a wonderful time for the president of Russia to step into the Balkans and convince Mr. Milosevic it's in his best interest and his country's best interest to leave office."

Cheney gave his boss a two-day-delayed "Big time" on this.

"It's now clear from the press that in fact that's exactly what they were doing," Cheney said. He said that Gore had "pooh-poohed" Bush's suggestion.

But Gore was right to pooh-pooh. He should have pooh-poohed. It was a good pooh-pooh.

Because as of Tuesday night, it wasn't clear if Russian prime minister Vladimir Putin had even accepted the validity of the election of Milosevic's rival, Vojislav Kostunica -- in stark contrast to what many other world leaders were saying as they called for Milosevic to go. Putin has since offered to help mediate the controversial election, but that, still, is not quite the same as acknowledging that Kostunica won.

It's a classic Gore maneuver: to turn a question on its head so that his opponent is somehow not only incorrect, but a bad person, as well. He did this to Sen. Bill Bradley during the primaries, insinuating that Bradley was somehow calling into question the wherewithal of the members of the Congressional Black Caucus since they hadn't endorsed him. Gore again did this Tuesday night to Bush, when the Texas governor hammered Gore's unwillingness to reform Social Security, saying his plan calls for "loading up IOU's for future generations."

"When F.D.R. established Social Security, they didn't call them IOU's, they called them the full faith and credit of the United States," Gore snarled. "If you don't have trust in that, I do."

Lieberman borrowed Gore's dodge when the question of the state of the military came up. "It's not right, and it's not good for our military to run them down essentially in the midst of a partisan political debate," Lieberman said.

But Cheney wasn't about to let his fellow draft-deferrer get away with it, and rightly so. "I'm not attacking the military, Joe. I have enormous regard for the men and women of the U.S. military. I had [the] privilege of working with them as the secretary of defense It's irresponsible to suggest we shouldn't have that debate. That we should ignore what is a major, major concern."

Both candidates reached their perfect pandering fever-pitch when asked about whether gays or lesbians should be given "all the constitutional rights of all Americans."

"I must say I'm thinking about this because I have friends who are in gay and lesbian partnerships who said to me, 'Is it fair we don't have legal rights to inheritance, visitation when one partner is ill to health care benefits?' That's why I'm thinking about it," Lieberman said.

More shocking was Cheney -- who has never voted in favor of a gay and lesbian rights measure, opposed the early days of AIDS funding and has refused to discuss the fact that his own daughter, Mary, happens to be a lesbian. "Like Joe, I also wrestle with the extent to which there ought to be legal sanction of those relationships," Cheney said. "I think we ought to do everything we can to tolerate and accommodate whatever kind of relationships people want to enter into."

Does Cheney know that his running mate has opposed the rights of gay and lesbian couples to adopt, even supporting the right of the state of Texas to take a child from a gay couple to place it in the home of a straight couple?

But what was more interesting is that Shaw's question was not specifically about gay and lesbian marriage, or worker protections. Rather, it was broad enough for either to say that they supported constitutional rights for every law-abiding American citizen ... next question. But both knew what Shaw was really asking, and both more-or-less responded to the question. Like adults. Somewhat pandering adults, but adults nonetheless.

Similarly, when Cheney told Lieberman he'd been disappointed that he attended a fundraiser where a comedian made light of Bush's religion, Lieberman said that the joke was "distasteful" and "unacceptable." Then he did something you almost never hear a politician do.

"Any offense that was done I apologize for," Lieberman said. Like a grown-up. The night was full of those.