Robert De Niro works a menacingly cheerful voodoo in a rambling little comedy from the director of the "Austin Powers" movies. 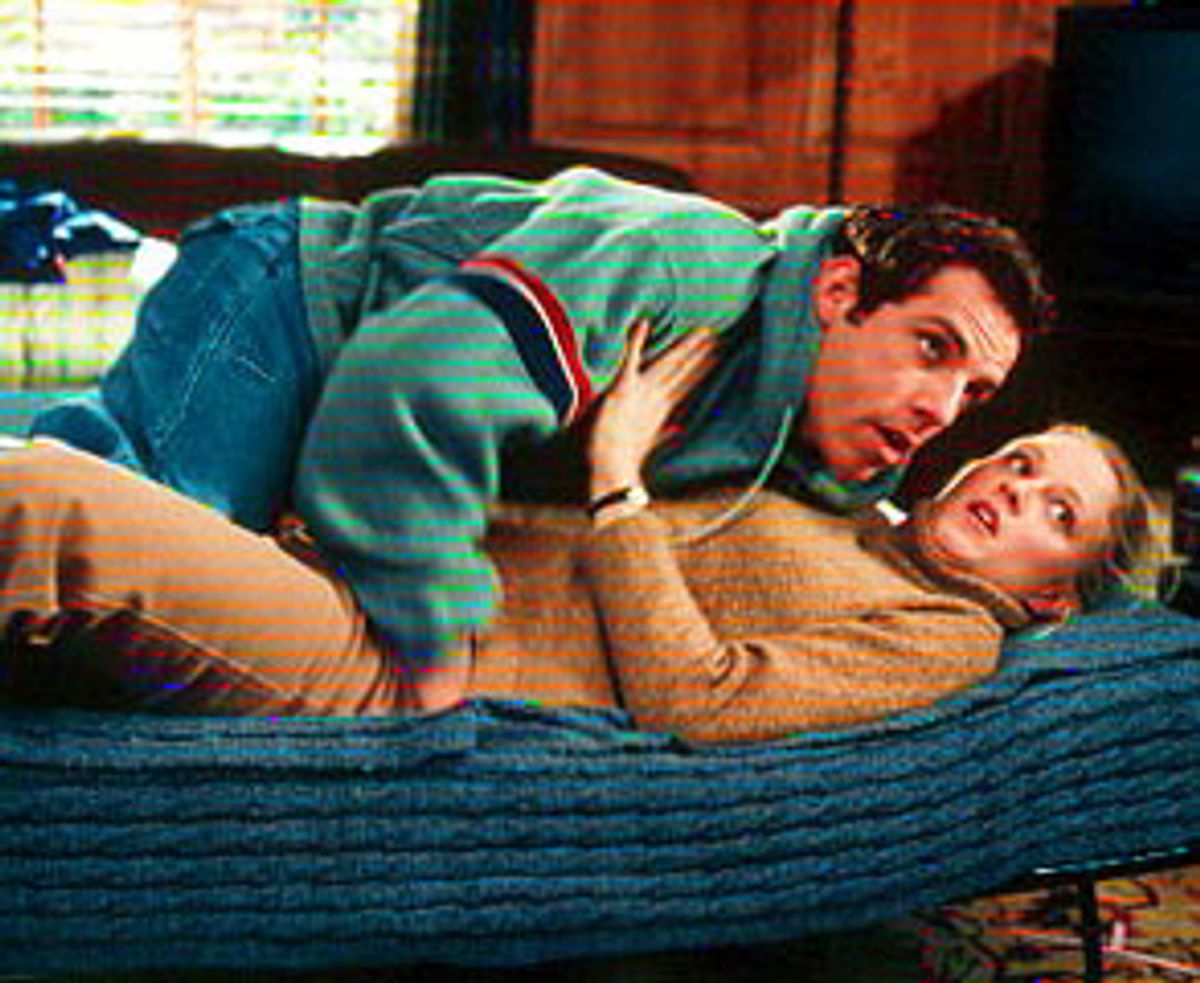 It must be tough to be an actor who has been universally decreed great. You can all too easily get caught in the web of constantly trying to top yourself or, worse, feeling that you need to prove to the world that you still matter. That's why it has been such a pleasure to watch Robert De Niro evolve into a comic actor. There wasn't a shred of actorly desperation in his portrayal of a neurotic mobster in "Analyze This"; his performance was casual and lively, an offhand curlicue with ironclad skill behind it as well as a sense of fun.

De Niro works the same menacingly cheerful voodoo in Jay Roach's rambling little comedy "Meet the Parents." As Jack Byrnes, a former CIA guy who's out to make life hell for his daughter's new boyfriend, Greg (Ben Stiller), he's both inscrutable and vaguely demented, the kind of by-the-book conservative who gets a kick out of tripping people up with his mind games and razor-wire intelligence. The script by Jim Herzfeld and John Hamburg, from a story by Greg Glienna and Mary Ruth Clarke, gives Jack plenty of sharp lines, and De Niro keeps them whirring.

Jack is hardly a soft guy, but it's clear he loves his daughter, Pam (Teri Polo), and, perhaps almost as much, his snooty longhair cat, Jinxie -- he has used military-style mind-control techniques to train the furry feline to leap into his arms on command and to use the toilet.

Jack doesn't have multiple levels, but he doesn't need them: De Niro comes up with enough variations on the bare bones of the character, bouncing lightly, if mercilessly, off Stiller's hapless befuddlement as he tries to expose the sweet, considerate, love-smacked Greg as a deviant who's just not good enough for his daughter. Part of the fun is that he never allows his crew-cut-precise facade to crack, whether he's hooking up Greg to a vintage lie detector machine or dropping him off at the local drugstore and breezily announcing, "I'll meet you back out front in about 12 to 15 minutes."

"Meet the Parents" is something of a romantic comedy, but it's Jack and Greg who are the mismatched couple, only gradually and warily coming to terms with each other. As the movie opens, Greg, deeply in love with Pam, wants to propose to her. Just as he's about to pop the question he learns that Pam's sister, Debbie (Nicole De Huff), is about to get married, so he puts the idea on hold temporarily. Pam also reveals that her sister's fianci had the good sense to ask their father for permission first, a tactic that hadn't even occurred to Greg.

When the couple arrives at Pam's family home for the wedding weekend, Greg immediately begins making gaffes and missteps; part of the fun is that we can see he's not really doing anything wrong. When he first greets Pam's parents, her mother, Dina (dryly amusing Blythe Danner), remarks on the curious smell in the air -- actually, it's the baby puke that clings to Greg's sweater after a chance encounter with an infant at the airport. He doesn't have anything to change into, as his luggage has been lost. And because he has been told that Jack is a retired rare-flower specialist, he thinks he has brought the perfect gift -- a special tulip bulb. The flower shtick was just Jack's professional cover, and Jack looks at the gift with disdain -- it's basically a pot stuffed with dirt -- and jeeringly pretends to be pleased.

Stiller's scenes with De Niro pack a bigger punch than the ones he plays with his love interest, but that's how it should be. What makes Stiller's Greg funny is that he's not a spineless innocent: He wants to be polite, but he's also eager to assert himself, to secure a solid place in his girlfriend's affections, if not her family's. One of the movie's great gags is that his dumb jokes fall flat among the other family members, while their even dumber jokes get big belly laughs; Stiller's line delivery has just enough crackle to it and he even seems to know how to use his strong jaw to good effect -- you can read whether he's feeling stubborn or crestfallen according to how it's set.

And his scenes with De Niro coast on a deliciously nervous friction that builds slowly. As the unease between the two mounts, it rattles Greg to the point of insanity, while Jack just seems to become calmer. It's a jittery pas de deux that frays your nerves a bit even as it makes you laugh.

Roach's direction isn't always as crisp as it could be; the movie's pace sometimes creeps a little, as it does in Roach's "Austin Powers" comedies. But he does know how to stage discrete comic moments, taking mildly humorous nightmares and turning them into nicely wrought miniatures.

When Greg comes out to breakfast in pajamas borrowed from Jack, his hair teased by sleep into a silly Tintin forelock, he's greeted by the whole extended family (most of whom he hasn't met yet), completely groomed and fully dressed in cheerfully precise prep-casual togs. And Stiller miraculously holds his own during a terrific sight gag, when he walks in on Jinxie squatting demurely on the potty. Greg can't believe what he's seeing, and neither can we: The startled and indignant expression on the cat's face is priceless.

Stiller and De Niro carry the show, but there are some playful comic turns tucked into the movie's margins. Danner, a terrific and largely unsung actress, doesn't have much to do here. But she doesn't make the mistake of playing the blindly accepting wifey, and she's fascinating to watch: She uses her character as a way of elaborating on Jack's. As she quietly looks on, observing the devious high jinks of the man she's married to, her face betrays a subtle variety of emotions: grudging acceptance, amusement, thinly veiled frustration.

And Owen Wilson, as Pam's ex-fianci -- who has made a killing in the stock market, is the proud owner of a brand-new cathedral-like house and has a master craftsman's talent for woodworking -- ladles out the bull so generously that it gets funnier as the picture moves along. When he reveals to Greg that it was Jesus, the ultimate carpenter, who inspired his love of woodworking, his manner has all the deadpan Middle America earnestness of a cardigan sweater.

But De Niro is, of course, the funniest -- if only because he's not entirely funny. After he badgers Greg into revealing that he prefers dogs to cats, he makes it look as if he's shrugging off the fact that Greg has chosen the "emotionally shallow animal." But of course he hasn't shrugged it off; he has grabbed onto it as if with pincers. De Niro's performance works because it isn't exactly likable -- he's totally at ease with his own jokes, but he's not out to make us feel relaxed. Our uneasiness actually makes his jokes funnier. And you can tell by the impenetrable smirk on his face that he likes it that way.