Young female novelists now take us, literally, into the bowels of their heroines, but does all this bodily frankness carve out a bold new honesty or dredge up the same old insecurities? 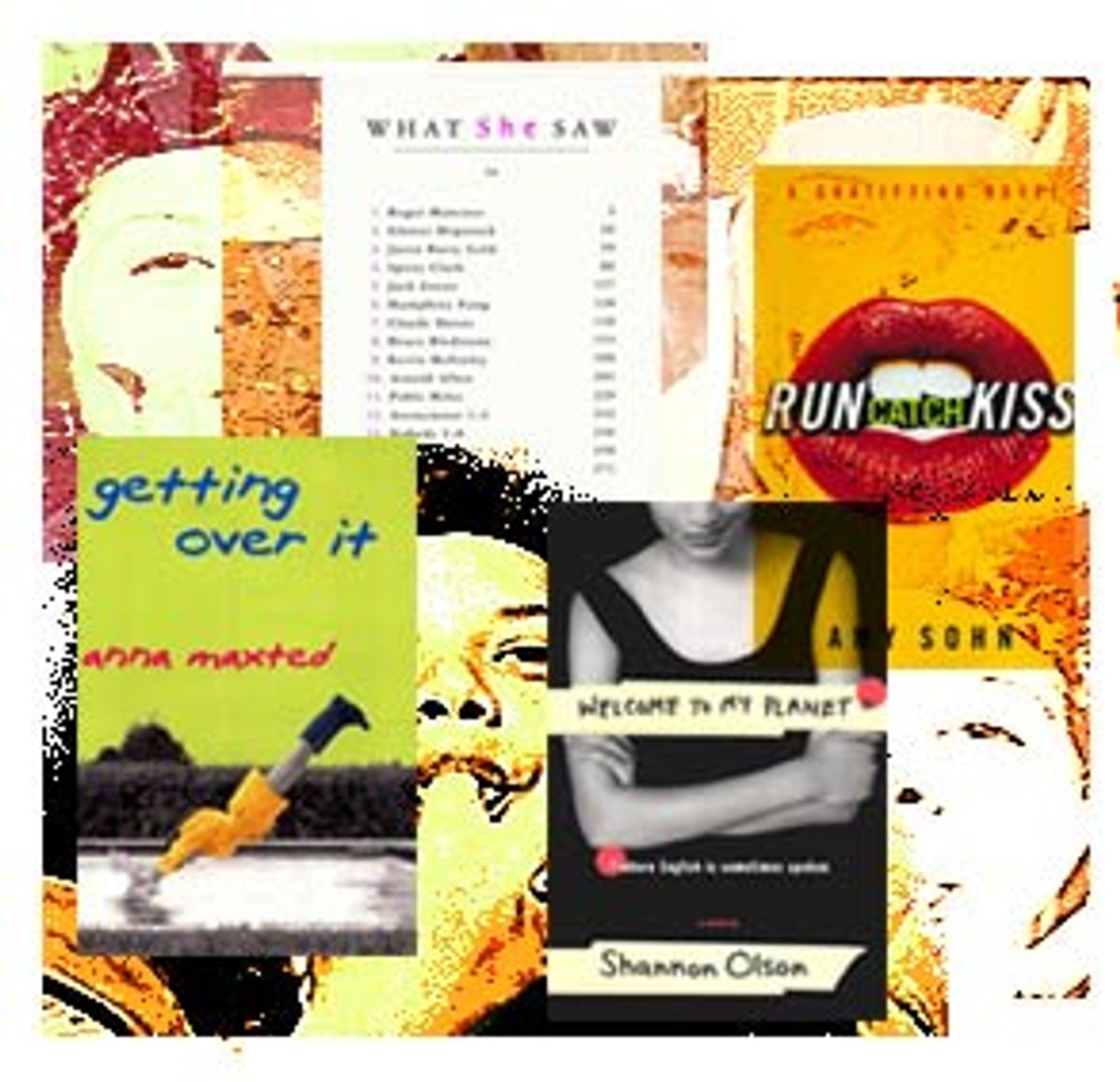 When Cameron Diaz mistook Ben Stiller's semen for hair gel and daubed it on her hair in "There's Something About Mary," she broke down one more barrier for women: They, too, could revel in the gross-out comedy world of excrement, vomit and other bodily emissions.

But Diaz, like most of the women in gross-out comedies, never herself knowingly does anything really gross. That's left to the guys; for the most part, women still admit to embarrassing physical moments only among themselves. Diaz is just a tourist in the world of freewheeling farting and belching, a world where most women fear to tread.

Yet a glance at recent first novels by young women shows a striking number of authors who write frankly about the gory details of bodily life. These books, like Amy Sohn's "Run Catch Kiss," published last year; Shannon Olson's recent "Welcome to My Planet"; Anna Maxted's "Getting Over It"; and Lucinda Rosenfeld's new "What She Saw ..." use gross-out details to assert something gritty, tangible and human about their characters. The protagonists, after all, never confront poverty, disease, racial strife, abuse or struggle (besides with relationships and their own self-esteem). Searching, perhaps, for some other kind of depth, the authors -- all witty and capable practitioners of the now full-blown single-girl genre -- freely expose their characters' nasty but natural acts, their destructive nervous habits (like finger chewing and pubic-hair plucking) and their secret eating disorders, as if these were all symbols of fearlessness and freedom. With guns blazing -- Hey, look at the kinds of things I'm willing to write about -- Sohn, Olson, Maxted and Rosenfeld seem to want to banish shame by the use of shock tactics.

It's a laudable goal, but too often their strategies don't work. These writers, like the writers on "Sex and the City," end up simply reinforcing women's body obsessions by flimsily repackaging them. (On the HBO series, the fabulous foursome may boisterously confess their flatulence faux pas and sexual idiosyncrasies, but as Judith Shulevitz pointed out recently in Slate, they completely buy into the idea that women can't be gross or natural in front of men.) Of course, female writers have long exploded social mores by being physically, or more often sexually, outspoken. In her 1963 novel "The Group," for example, Mary McCarthy wrote graphically and with anatomical precision about a single woman's first adventures with a diaphragm. Using the phrase "parting the labia majora" made a few cheeks burn back then, for sure; clearly, McCarthy wanted to stir up a discussion about premarital sex as a way to show her readers new possibilities about the lives of her unmarried female characters. But what happens to the latest bearers of risqui physical information, is rarely as liberating as their authors seem to hope.

In "Welcome to My Planet" and "What She Saw ..." Olson and Rosenfeld have created heroines who fret endlessly over their bodily dysfunctions. It seems almost inevitable that the characters' problems accepting their bodies develop into physical self-destruction. Phoebe Fine, the protagonist of "What She Saw ...," is, like Rosenfeld herself, a Jersey girl, and she comes with lots of built-in self-deprecating material. In fifth grade, Phoebe is "scared of boys in general and what they might require of her, but perhaps even more terrified of finding herself attracted to the very thing her daffy, well-meaning, culturally contemptuous parents had worked so hard to protect her from -- namely, the world out there in all its crudest, crassest, most inglorious expressions of animal need." Naturally, it's that animalistic, crass world that she finds interesting; enter Stinky, the aptly named first love of Phoebe's life: "She had always been attracted to men who showed no shame when it came to bodily functions. Maybe because they deflated the shame she felt about her own bodily functions. She found menstruation unseemly. She failed to see the point of pubic hair."

Some years and some guys later (the novel is organized on a guy-per-chapter basis), Phoebe has taken to plucking out these useless pubic hairs, likening them to her own stagnant existence: "She plucked them one at a time and it was an arduous process and sometimes it hurt but it had to be done but they always grew back it was the same thing over and over again there was never any progress never any resolution." Besides her hair-plucking fetish, Rosenfeld keeps the reader up-to-date on Phoebe's "chronically mutilated cuticles," which serve as benchmarks throughout the book, monitoring just how screwed up she still is. During Phoebe's affair with a married professor, Rosenfeld writes, "an ugly period of Phoebe's life was to follow. She chewed her fingernails into a bloody pulp."

Phoebe's determination to stamp out everything that's too physically unattractive or uncontrollable culminates in an eating disorder, though it's never named, addressed or overcome. The first mention of some sort of problem appears among other examples of how she spent the summer vacation after her freshman year of college. Phoebe "lost eighteen pounds -- not by accident. She worked diligently to achieve hipbones that sharp. She understood the jealousy emaciation aroused in other women." After a failed study-abroad experience, Phoebe returns home early, "smelling of vomit -- gamy, verdant, vertiginous, verisimilar vomit." Bulimia is one of many sordid details of her disappointing trip to France: She'd wanted to return smelling of sex, but instead met her parents at the airport reeking of her illness.

Why has this happened to funny Phoebe Fine -- the same precocious girl who at age 12 wrote in a letter to a foreign crush, "My favorite stamps are from Nazi-occupied Estonia. I also really like the John and Jackie series from Sierra Leone"? Rosenfeld doesn't care why, I suspect; she's not prepared to penetrate Phoebe's veneer of humor and mock angst to search for deeper causes. Delivered through Rosenfeld's admit, shock and drop technique, the disorder is presented as an unfortunate twist of fate. At first, I was encouraged: I thought Rosenfeld was addressing the sort of closeted anorexics and bulimics that I know, the ones who suffer for years, teetering on the edge of diet crazed and sick, while convincing their loved ones that they're just very health-conscious. Instead, after commenting that "it was all pretty tragic," she writes in a dramatic, one-sentence paragraph: "Bruce Bledstone made it less so."

Shannon Olson's "Welcome to My Planet" is a smart, rather touching book about a young, lone Minneapolis woman also named Shannon. Unable to find happiness in her relationship, her therapy or her work, Shannon chips away at her body in despair: "It's true that I have developed the bad habit of picking at my toenails. I pick at them through Friends and Frasier, through The Simpsons and ER. My fingernails, too. Sometimes Michael takes a break from his work, walks into the kitchen and catches me sitting in the blue light of the television, furtively ripping off my toenails." The scene is sort of comical at first, until the reader must confront the image of a lonely woman, cast in the hypnotic glow of sitcom TV, making herself bleed.

There are some acute and clever observations about single women's lives in both these novels, but in neither does the author's frankness about bodily realities seem truly daring. Olson's depictions of self-mutilating behavior are sad and poignant, while Rosenfeld's ultimately come off as sheepish and vain. Once Phoebe meets the "right" guy -- one who reads Tennessee Williams, refers to Buddhist theology and inquires whether she's cold -- we hear nothing more about her bloody cuticles or her furtive vomiting. The effect is something like "Boy won, eating disorder gone." Yet she's still depressed and moping about her sad life "of unpaid bills and unwanted hairs." She hasn't made many inroads professionally, and she's still living with a different guy, one she has grown tired of.

These two books are comic on the surface but dark underneath; ostensibly, their authors are plunging around for deeper meaning and social realism. But we don't get much insight into the world that produced characters with these difficulties, and the psychological portraits seem oddly truncated. While the characters may be hip to their own problems, their humor and bravado mask an overwhelming fragility and passivity that the authors don't seem to take seriously. Instead of boldness, the impression is one of fearfulness and immobility -- on the part of the characters and the authors.

It's not always this complex, though; in some cases, the writers exploit their characters' imperfections for a down-to-earth laugh. For instance, Maxted, whose "Getting Over It" details the topsy-turvy life of a single woman in London, details her character's embarrassment over getting caught in her "ratty period knickers," and drunkenly peeing in her pants in front of her latest crush. Similarly, Ariel Steiner, the heroine of Sohn's surprising and funny "Run Catch Kiss," discloses the graphic details of her humiliating farting spree. "It just sits there, brewing, expanding, getting fatter and meaner till the stench is so potent it starts to make you quake." She doesn't stop there: "I felt the milk from my oatmeal start to churn in my stomach. I winced and grimaced and crossed my legs, but it was to no avail. I let a silent one rip, I mean, really rip right out with vigor and abandon." Her boyfriend plays someone akin to a Farrelly brothers heroine: "My boyfriend was laughing in my face because I smelt like ass."

Although Ariel seems horrified by her unruly bodily act, she accepts it. These scenes are part of the writers' usually successful attempts at comedy, with themselves the butt of the joke. Still, it's worth noting that these unbecoming manifestations of humanity manage to erupt mainly around the opposite sex. The old female obsession -- getting, keeping or losing male approval -- seems to be the only real impetus for exploring such formerly taboo themes.

In the end, these authors seem to be holding their breath while jumping into something unknown and scary. When it works, as in parts of "Run Catch Kiss," the protagonist survives with her strength and comedy intact; we last see Ariel scribbling furiously, working, producing, trying -- alone. But too often, the characters' profound physical insecurities just hang there, with little reason and even less resolution: Let me show you how I pick apart my body, my body fluids, what I consume, what I purge, what I pluck. A strange cry of desperation haunts their hearty efforts at self-mocking humor. What comes across isn't an avant-garde female honesty but, rather, some all too familiar narcissistic preoccupations. Ultimately, these authors' relentless physical scrutiny is not a new frontier of honesty -- it's the last frontier of vanity and insecurity.

Perhaps the right guy will make me feel beautiful, these characters hope, and you can't help feeling that their authors share the same dream. Needless to say, these are limiting parameters for a novel. By now, readers know all too well how the world has affected young, single, white women. But are we any closer to understanding how they perceive or fit into a world outside of themselves? In current single-girl novels, we're left with, at best, as in "Run Catch Kiss," a buoyant gross-out laughfest and, at worst, as in "What She Saw ...," a disheartening picture of one girl's inability to come to terms with her body and herself. All Rosenfeld can think to do with her fictional creation is to leave her in the arms of a brand-new guy, smiling graciously because he compliments her eye color.