In HBO's comedy series "Curb Your Enthusiasm," "Seinfeld" co-creator Larry David -- the model for George Costanza -- boldly remakes a classic in his own image. 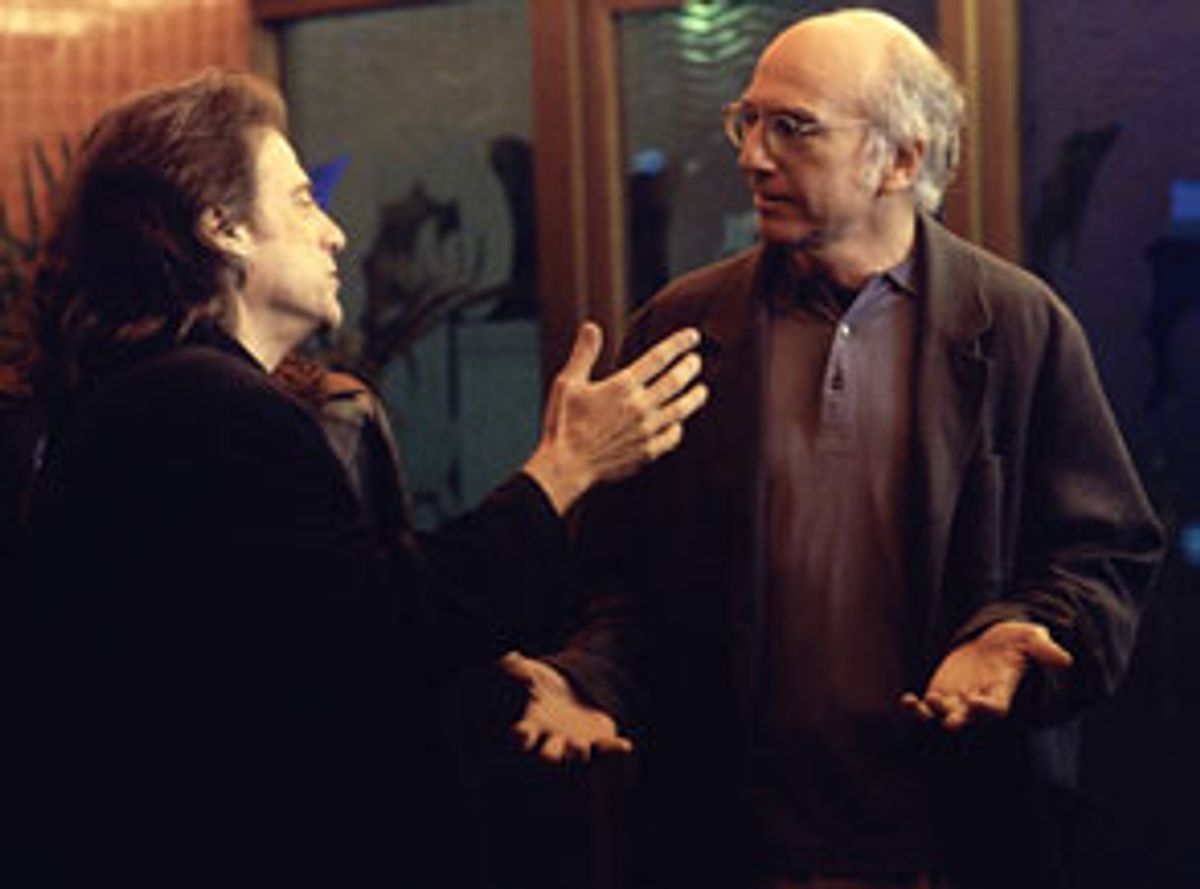 If "Seinfeld" had been called "Costanza," it might have looked a lot like "Curb Your Enthusiasm," the pitch-dark new HBO sitcom from "Seinfeld" co-creator -- and real-life inspiration for George -- Larry David.

On "Seinfeld," George (played by Jason Alexander) was a neurotic magnet for disaster, most of which he brought upon himself. He was a lazy, cheap, cowardly, selfish schlub; like his pals Jerry and Elaine, George lied to get around obligations and awkward social situations and it all came back to bite him. He was the meanest non-Newman character on the show; remember his joyous response when his fiancie Susan dropped dead after licking the toxic envelopes to their wedding invitations? George's only redeeming quality was his pathetic self-loathing: "I come from a long line of quitters. My father was a quitter. My grandfather was a quitter. I was raised to give up." And David, Seinfeld and their writers seemed to take particular delight in contriving humiliating final-act paybacks for Georgie Boy.

Indeed, George's jackass behavior set in motion some of the series' most memorable episodes. In "The Contest," his mother catches him masturbating, falls over in shock and ends up in the hospital, which leads to the "master of my domain" wager among George, Jerry, Elaine and Kramer. In "The Opposite," he acts against his loser instincts and winds up with a beautiful girlfriend, an apartment and a dream job with the New York Yankees. In "The Blood," he becomes obsessed with scoring a "trifecta" of Costanzan pleasures -- having sex, watching TV and eating, all at the same time. Oh, George, what a schmuck you were. And how we miss you!

It might seem odd that David is remaking "Seinfeld" in his own image (forget the "summer of George," this is the autumn of Larry), but, then, much about David is odd. Writer-producer David meticulously oversaw the first six seasons of "Seinfeld" (he was also the voice of George's boss, George Steinbrenner), infusing the show with his surrealist sensibility and harsh irreverence. He walked away from the show in 1996 at the height of its popularity, but returned two years later to write the final episode, where Jerry, George, Elaine and Kramer are put on trial and sentenced to prison for being nasty, self-centered and lacking in compassion toward their fellow citizens.

A former New York stand-up comedian, David rarely performs for audiences these days (one notable exception was a recent appearance at a Gore/Lieberman fundraiser in Beverly Hills). But when he does, his routine marries New York Jewish sarcasm, sharply absurdist scenarios and social observations that dance on the border between good and bad taste -- the "Seinfeld" formula. In one of his stand-up bits, he plays Jonas Salk's mother boasting to the neighbors about what a genius her boy is; in another, he asks the question, "Did Clinton actually think he was going to get blow jobs from a Jewish woman and that's gonna be the end of it? No consequences?"

"Curb Your Enthusiasm" (the title is ironic; in the show, David is incapable of enthusiasm) was launched last year with an HBO special of the same name. Like the special, the show is filmed cinima viriti style. (Robert Weide, the Oscar-nominated director of the documentary "Lenny Bruce: Swear to Tell the Truth," directed the special and the series opener.) Celebrities pop up here and there playing themselves -- Alexander and Seinfeld were in the special; Mary Steenburgen, Ted Danson, Kathy Griffin, Richard Lewis and Julia Louis-Dreyfus all appear in the series. And in a dazzling bit of high-wire acting, all of the dialogue is improvised by the actors, who are following story lines sketched out by David. The result is a nifty slice of faux reality, a put-on to rival "The Larry Sanders Show." It's a deadpan portrait of a guy who has achieved legendary status in the TV industry, but who remains an unhappy, insecure jerk.

In "Curb Your Enthusiasm," David brazenly recycles -- OK, steals -- his old show's nothing-and-everything premise and domino-effect plot structure. But, look, it was a great premise and plot structure, and he seems to have more than enough funny stuff to do it justice here, so I'm inclined to let the grand-theft-sitcom charges slide.

Most of Larry's problems arise from his adherence to an arcane code of urban interaction and etiquette. He gets into arguments about decorum with wait captains at restaurants (to tip or not to tip?), shoe salesmen at Barneys (how is he supposed to know that the salesman would lose his commission if he canceled his special order?), even his own friends. When he and his wife, Cheryl (Cheryl Hines), are invited to a Paul Simon concert by Steenburgen and Danson, and then seemingly forgotten, David sits by the phone fuming that the couple doesn't even have the decency to call and make up a lie to disinvite them: "A lie is a gesture, it's a courtesy. It's a sign of respect!"

David is so obsessed with maintaining his own fragile comfort level, he's nearly oblivious to the needs of his family and friends. The people in David's orbit -- manager Jeff (Jeff Garlin), the too-forgiving Cheryl, buddy Richard Lewis (he's Jerry to David's George) -- may as well be space junk. All of the plots of "Curb Your Enthusiasm" (I've seen four upcoming episodes) hinge on David lying to, offending or insulting someone, sometimes inadvertently, sometimes on purpose. Consequently, David's always being prodded (by Cheryl, Jeff or Richard) to make an apology, which he is loath to do since, like George, he prefers to thinks of himself as the injured party.

How much of the Larry David in "Curb Your Enthusiasm" is the real Larry David? Well, in the special, Alexander recalled that he thought some of the things that happened to George on "Seinfeld" were too weird and unrealistic, until David told him that they had actually happened to him. And art and life converged when David performed at that Gore/Lieberman fundraiser last month. He told a joke ridiculing George W. Bush's "personal relationship" with Jesus ("Like Bush, I too found Christ in my 40s. He came into my room one night and I said, 'What, no call? You just pop in?'"), which got back to the Bush camp and nobody was amused. The joke even drew the disdain of both vice presidential candidates in last week's debate. Just as he did with the horrifyingly funny death-of-Susan episode of "Seinfeld," David had managed to offend everybody. So what else is new?

In the ironic, O. Henry universe of "Curb Your Enthusiasm" (and "Seinfeld"), wrongs can never be put right, apologies always backfire and lies, offenses and insults come back to haunt the perpetrator. "Seinfeld" took heat from some (humorless) pundits for "glorifying" bad behavior. But the truth is, "Seinfeld" was a very moral show, and so is "Curb Your Enthusiasm." As he did on "Seinfeld," David punishes his characters -- well, here, he punishes himself -- with retributions on an Old Testament scale. Halfhearted apologies don't count for squat, and humiliation befalls the sinner. There's a magnificent running joke on "Curb Your Enthusiasm"; whenever David tries to trade on his "Seinfeld" fame to get somewhere with maitre'd's or studio heads, the response is always, "Oh, I never saw the show." The self-loathing in that joke (I'm a genius ... in television) is awe-inspiring.

But, the question remains: Why is David doing this? Why try to top your one perfect, untoppable success? Maybe the answer is "hubris"; maybe David wanted to see if "Seinfeld" would fly with George at the forefront, not the more congenial Jerry.

Or maybe David feels he didn't get it right the first time. After all, the "Seinfeld" finale was its strangest, most unsatisfying episode. The jokes were flat and forced and Jerry, George, Elaine and Kramer seemed to be not quite themselves. For nine years, they had behaved badly yet remained sympathetic figures because, no matter how small, nutty or selfish they were, they always got their comeuppances at the hands of worse people than them. This was, after all, New York.

But in that final episode, David abruptly made them unsympathetic; called to answer for their past transgressions, they reacted with obliviousness, glibness and cowardice. David's resolution -- putting them in jail -- was probably meant to be a surreal final metaphor: These four would always be prisoners of their own pettiness. But it seemed too literal, too heavy-handed an ending for a show where punishment had been doled out so subtly and ironically in every episode before. Since the characters had never really gotten away with anything on "Seinfeld," the prison cell finale seemed like overkill, more intended for us, the viewers, than Jerry and the gang. It was as if David were hectoring us saying, No, no, no, you weren't supposed to like them!

In "Curb Your Enthusiasm," David makes many of the same points he made in the "Seinfeld" finale -- that Larry is trapped in a negative force-field of his own making; that he is a character many of us might identify with, but it's something we shouldn't be proud of. Here, though, he does it within a more elegant comic structure. And he seems to have resisted (for the moment) the impulse to tear everything down. "Curb Your Enthusiasm" dials the moral tone back a few years, to when "Seinfeld" was deftly, hilariously, showing us the dark truths about our baseness as humans and as a society. Whenever Larry tries to apologize, tries to be a better person, the injured party ingraciously dumps on him, gets carried away with indignation and turns self-righteous, petty and crazily vengeful. It's as if Larry is eternally lashed to some great karmic wheel, taking punishment that is spectacularly out-of-proportion to his crimes. He's repeatedly thwarted in his attempts to do the right thing by one immutable fact of life: other people.