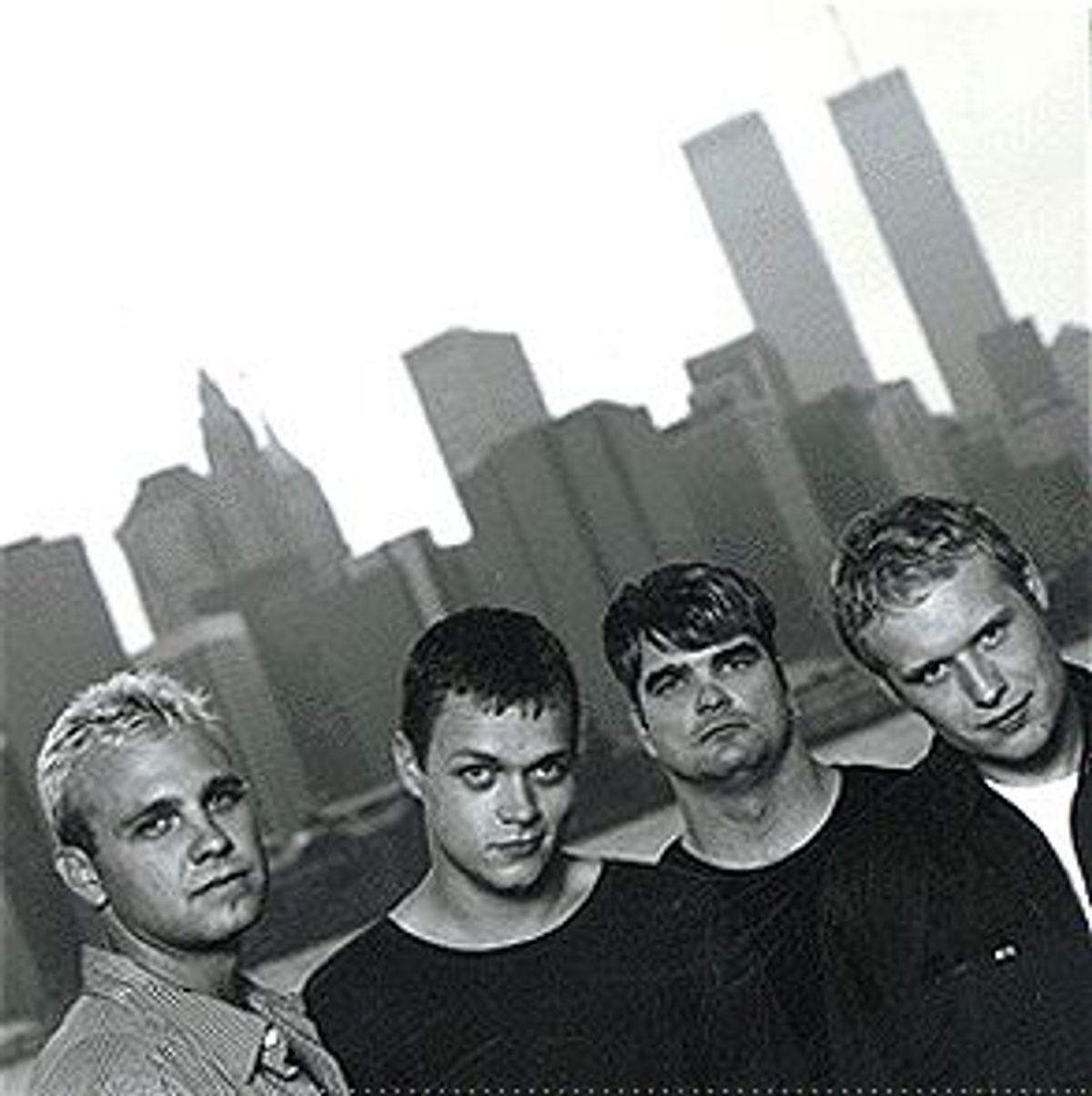 Chris Henderson is one of the two guitarists in the band 3 Doors Down, whose first album, "The Better Life," has already sold 2.3 million copies. The first radio cut off the album, "Kryptonite," is currently the No. 1 Billboard Top 40 song in the country. The next radio cut, "Loser," is on the same path. The song is No. 1 on two of Billboard's charts, making 3 Doors Down the first band ever to hit No. 1 on Billboard's Mainstream Rock chart with its first two radio tracks.

You might think, then, that Henderson would be living the good life, awash in the fame and cash that must certainly accrue to band members with smash hits. And sure, he's doing all right. But the realities of the music business, even for those lucky enough to hit it big their first time out, don't add up to an unlimited gravy train. As Henderson explains, it's pretty hard to make a living as a musician, even when your music is playing on radios everywhere. For the industry, that's one reason online music trading services such as Napster are making such huge waves. If even the artists aren't earning a whole lot of money from their music, why should the record companies be raking in millions? And for artists in particular, the vagaries of the business mean you'd better pay attention to where you put your money and how your 401K is doing -- chores that most people don't associate with rock stardom.

3 Doors Down formed as a trio in 1994 in Escatawpa, Miss., playing covers and originals around the area's few clubs. Henderson joined in 1997, and the band recorded an independent CD to sell at shows. Their big break came last year, when a DJ who had been playing "Kryptonite" on a local music show broke station rules by moving it to the morning show, igniting a buzz that made the song No. 1 at the station for almost six months. Republic Records, a division of Universal, caught wind of the excitement and flew the band to New York for a showcase at the legendary CBGB club. The label liked what it heard, and 3 Doors Down went from small-town band to having a major-label contract and Top 40 stardom.

Despite the band's quick success, Henderson, 29, is the opposite of what you'd expect from one in the throes of newfound rock stardom. He talked to us from the middle of a field in Escatawpa, hauling musical equipment from a trailer. Henderson seems like a bowling buddy, the one who'll be there to lend you money or put you to bed when you've had one too many.

Was there a lot of dues-paying for 3 Doors Down, or do you consider your success fairly quick?

Commercial success came very quick, but we did a six-year tour of Pascagoula and Biloxi, Miss. We paid our hometown dues.

You worked construction for years, right up until the band got signed. Did that prepare you for the rigors of life on the road?

If our manager calls and says, "You got a phone interview," or "You gotta do TV," I'll always look back and say, "This sure as hell beats building." It keeps me focused and shows me what I don't want to go back to.

As the labels were courting you, how did you support yourselves? Were you all still working?

I was the last one to quit my day job. Todd, Brad and Matt had already quit their jobs, but I couldn't. I'm a homeowner and I have two cars (and dogs), and I had to continue to support myself. But I was fortunate that the place I worked was able to see the opportunity I had, and didn't try to take that away from me. They let me take all the time I needed. They could have said, "Hey, you can't go; either stay or lose your job," but they never did. And I missed a lot of time at the end. They were just like, "You've been here for four years, you've done a great job, so have fun."

Do you have any idea how much money you'll make off this album?

No, not really. We haven't got the numbers yet. We like to see paperwork. Republic and Universal only release paperwork twice a year.

Has there been a financial benefit for you yet?

Definitely. I'm doing better than I ever have in my life. Like yesterday, my car broke down, and instead of saying, "Oh God, I have to work two weeks of overtime to pay for this," I just went down and had it fixed.

When did you start receiving checks?

They're only released twice a year -- we haven't made any money from record sales. Bands live off of touring. When you get your record deal and start selling records, the odds are against you right off the bat. The record company puts $2 million or $3 million into your promotion ...

Right, and you don't really get that many points off your record, so it's hard to do that. You gotta sell a million, million and a half to recoup. And 90 percent of bands don't ever recoup.

So you make your money on merchandise and ticket sales?

Merchandise and ticket sales, and anything else that comes along, endorsements and things like that.

So how much money do you see yourself making this year?

A couple hundred thousand, maybe. That's just off of touring.

Are you an investor?

Oh yeah. I invest 25 percent of what I make.

How long have you been doing that?

Stock market and land, real estate. Residential. I haven't bought any commercial property, although I have been looking at some.

What stocks have you invested in?

I have to get my portfolio out, there are so damn many. I invest with a broker in New Orleans, and I haven't been in touch with him for about six months, so I'm not prepared to answer that question right now.

How has it done for you over the years?

Do you steer yourself toward any one category of stock?

No, I just go where my broker tells me. I'm not a financial guru, I gotta be led by the short hairs. I put my faith in them. I do keep my eye on it the best I can, but the last six or seven months I've been so busy.

Does the band discuss its financial future in terms of "rock 'n' roll is fickle, let's prepare in case this doesn't last?"

Oh yeah, we set the crew and band and everybody up with a 401K account, because we know it's not going to last. The band invests as a group, and everybody invests individually.

Who helps the band with that?

We went to a broker in Mobile, Ala., that all our families have worked with over the years. He was the natural choice -- no sense in changing when he's worked with everybody's mommy and daddy and uncle and cousin, so we looked to him to set the 401K plan up, and our business manager in New York set up the band's investments, and individually we set up our own.

What is your most important consideration where money is concerned?

Being able to have something to fall back on. I'm not really worried about being terribly, terribly rich, as long as I'm comfortable.